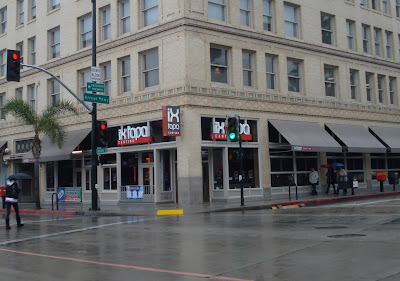 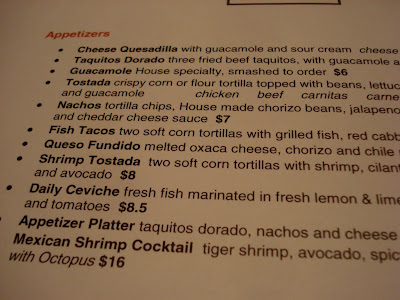 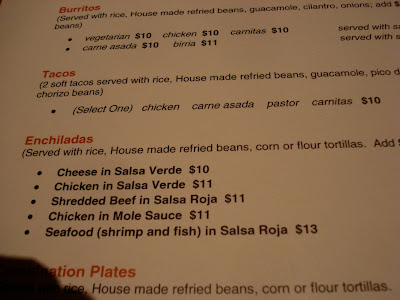 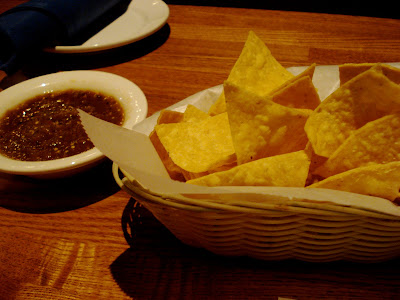 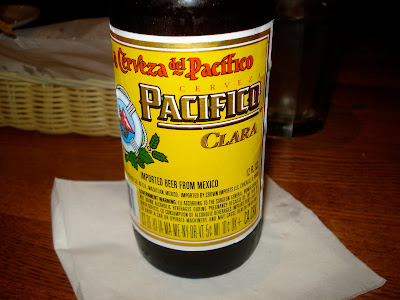 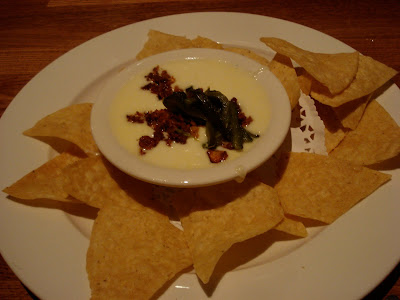 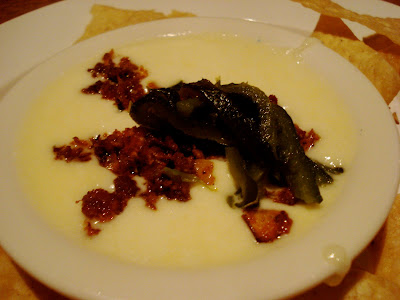 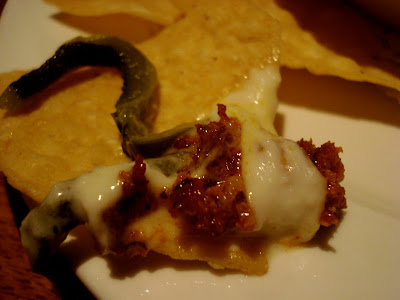 Ix Tapa Cantina opened last month, a Mexican restaurant from the same owners of Bar Celona and Villa Sorriso. I was intrigued by the idea; more than a few times a year I miss the habanero salsa and fish tacos on the patio at the long-gone Sol y Azul. But I worried Ix Tapa would just be the Mexican version of Bar Celona and Villa Sorriso: average food, pathetic service, and the kind of crowds I've never been a part of.

When I was a teenager, Moose McGillycuddy's was in this location, and it always looked fun. I came in shortly after I turned 21. It was horrible: high covers, obnoxious music, and often a line down the block. Of course, girls I knew always wanted to go there, so I frequently did. One night there was line of at least 100 people waiting to get in; my buddy walked up to the bouncer and told him we worked for Pricewaterhouse - which neither of us did - and he immediately let us in. (I could not make that up, not in a million years.)
"Did we just jump the whole line by lying about working for an accounting firm?" I asked him.
"Yeah," he said, "it's a long story."
That's the kind of place it was, which is to say not mine, although I suppose in that story lies a harbinger of what Old Town would become.
A couple years back Moose's closed and became Fred's Mexican Cafe, an unremarkable but still likable place with large schooners of beer and appetizers that were much better than their entrees. I only ate full meals there twice but had snacks in the bar at least a half dozen times. I enjoyed it but was neither sad nor surprised when I heard it was closing.
Earlier this month, my friend Tracie and I were trying to come up with a dinner idea. After the requisite cursing of the fact that La Fornaretta no longer exists, we decided to try Ix Tapa. It was pretty empty. We started with a couple bottles of ice cold Pacifico and the usual chips and salsa. The chips were great, fresh out of the fryer. The salsa was lousy, that metallic-tasting salsa that many restaurants serve but I have yet to meet someone who enjoys.
We decided to start with an order of queso fundido, with chorizo and chiles. It was very good, one of the best I have ever had... at a restaurant. I have a few friends who make queso fundido and they all do a much better job than this, but it was a good appetizer and I probably should have just gotten another order for my meal. 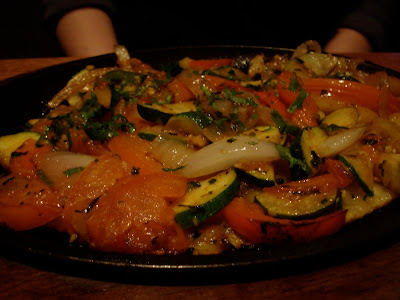 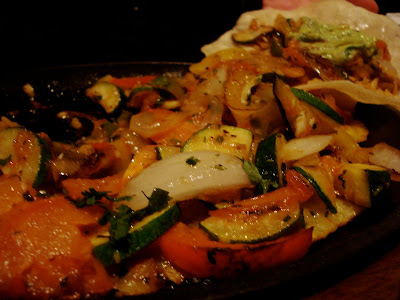 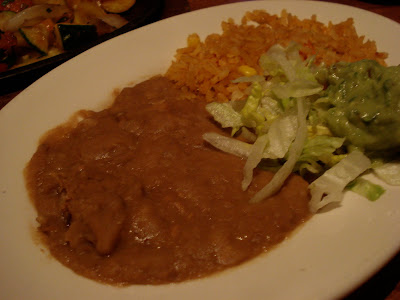 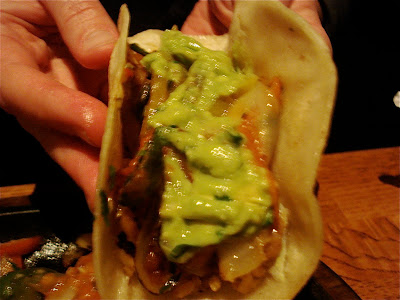 Tracie ordered the vegetarian fajitas. I was hoping for a sizzling platter to hit the table like at El Cholo (or, I guess, Chili's) but this one was not. It was served with beans and guacamole. I did not try any; it did not look very good. Tracie was not particularly effusive in her praise, but she said it was decent. 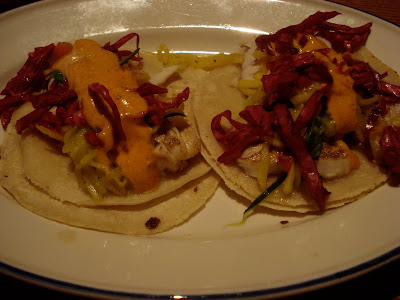 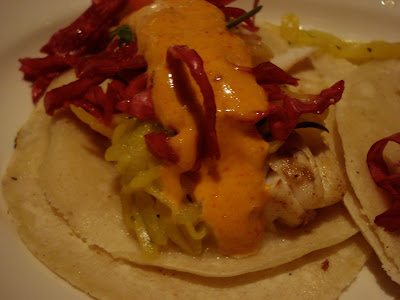 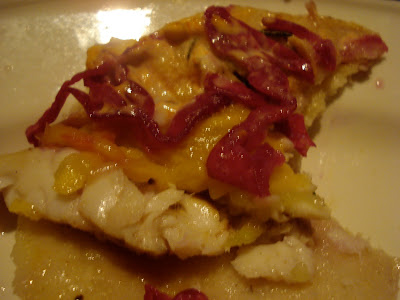 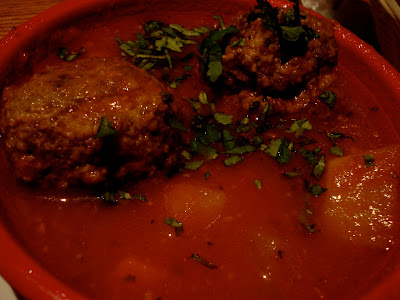 I ordered the carnitas tacos. "We ran out of those tonight," our server said. This seemed strange; it was only 8 PM. So I ordered the fish tacos appetizer and a cup of albondigas soup.
The fish tacos were grilled with red cabbage, mango, cucumber and cilantro. The red cabbage and the sauce were very nice flavors - tart and creamy. But the fish was just average. It wasn't bad, but it was inexpensive fish lacking any flavor at all. It would not surprise me if it was frozen only a short while earlier.
The albondigas soup was good. The meatballs were juicy and flavorful and the broth was tasty. I'm no expert on soups - I really didn't start eating them until just a couple years ago and this is probably only the third albondigas soup I have ever had in a restaurant - but I was pleased with it.
The service was very good. As I mentioned, the restaurant was pretty empty and it seemed like we had three different people waiting on us, but we were never lacking for anything.
I liked Ix Tapa more than Bar Celona or Sorriso, but that's not saying much. "Even though this was nothing special," Tracie said, "at least it's something independently owned and not another Cheesecake Factory or Buca di Beppo." And she's absolutely right, I'm glad this is not a chain and has at least a touch of uniqueness to it. (Though I wish we could have back Breadcrumbs or Kuala Lumpur or La Fornaretta, or another of the unique restaurants that were actually good.)
I doubted I would ever return for a meal, but decided I would try their happy hour one day. And, as you're about to see, that day was last weekend. 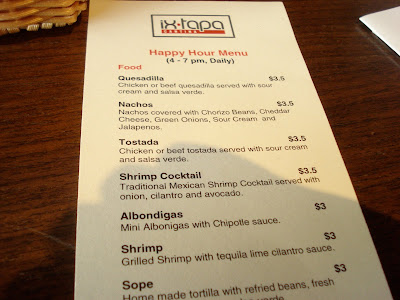 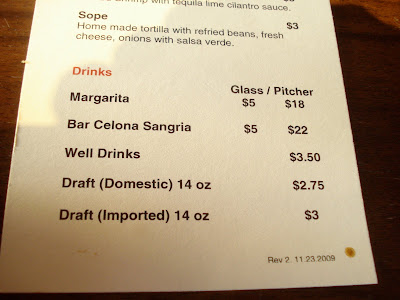 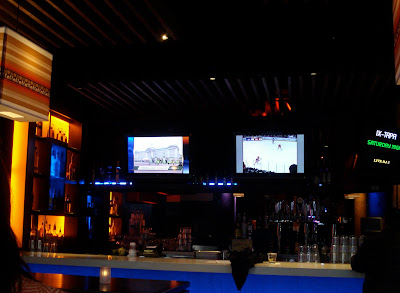 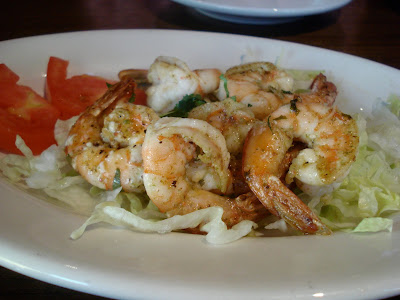 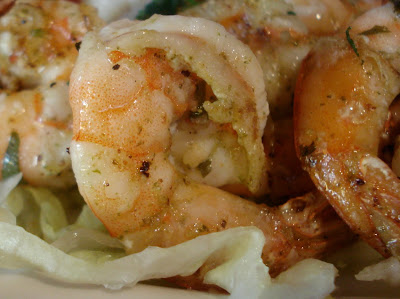 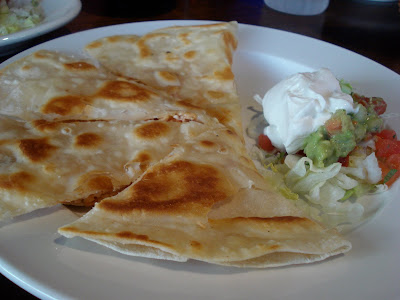 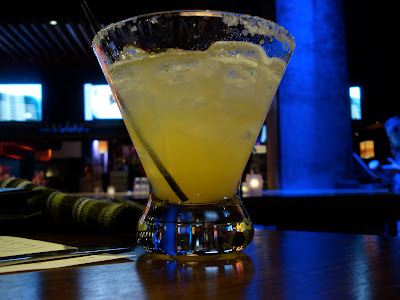 This past Saturday was our first day without rain in five days, so Elizabeth and I decided visit a couple stores in Old Town and go to happy hour somewhere. Ix Tapa has a happy hour seven days a week, so we decided to try it out. We sat by the window on Colorado Blvd. and ordered a couple beers - Dos Equis for me and Blue Moon for her.

(It was our server's first day on the job, but he was doing more work than anyone else; these were the servers I am used to at Bar Celona and Sorriso - joking around with each other, playing with their cell phones, rubbing each other's shoulders, and paying almost no attention to the customers. I'm glad none of them were our server.)
After one drink we ordered a couple of snacks: a cheese quesadilla with chicken, for $3.50, and some grilled shrimp for $3. Both of these were good. Nothing special, but well worth their happy hour price. The shredded chicken in the quesadillas was tasty, and the tequila lime cilantro sauce on the shrimp was very good.
Our friend Murph came by to hang out with us and he asked what we'd eaten. We told him and he ordered the same thing. He really liked them both (which did not surprise us; he usually says something is "unbelievable" when he tries it for the first time) so he ordered a second plate of each. After a couple bites of round two he said: "Why did I order these?" But we were able to help him finish them off while he finished off his second margarita.
Later on that evening I ran into my buddy Stewart. He said: "I was driving past and saw you at Ix Tapa. I had dinner there the other night; we've decided to call it Ix Crapa from now on." My feelings aren't that harsh about the place. The dinner I had there was very average, but I enjoyed the happy hour. I doubt I will ever return for the former, but I could see myself having beers and a quesadilla or some albondigas at happy hour again.
Posted by JustinM at 9:12 AM

Yeah, it was definitely good. You have to be pretty terrible to make melted cheese, sausage and peppers taste bad, so I'm not giving them too much credit, but I have had queso fundido before that was bad, and this stuff was good.

Ooh, La Fornaretta!!! I miss Cesare, the mad Sicilian and his great food...

There very few Mexican restaurants that don't serve the same "land-fill" quality garbage. I like La Cabinita in Montrose and a new place, although it's a long drive, Sabor in Valencia (not to be confused with the lackluster Sabor in Glendale, yechh!). They make cool Cochinita Pibil and rockin' mole with fresh, high-quality ingredients.

I'll probably give Ix Tapa a miss. Thanks for the research!

Why did girls wanna get into Moose, a place you considered horrible??

That corner may turn out to get an even worse reputation if it keeps turning over restaurants at the current pace.

Well, this is when we were all 21. I doubt any of them still go to those kind of places. But they had Ladies Nights, the girls got in for free, and there were always lots of guys to hit on them/buy them drinks.

At any rate, I've always preferred the boring and dive bars to the happening scenes. My female friends when we were in our early 20s did not like my bar choices, they wanted to go places where there was more action, so I often went along.

Yes. My last trip was in the fall, for Elizabeth's sister's 21st birthday. I took pictures of my food but never did a post on it, because it would have literally been the most negative post out of the 324 I have written on this blog. The place was packed and everything about the meal - from the quality of the food to the lack of service to the fact that they got my order wrong to the length of the wait for our food to the fact that they overcharged us for the champagne - was unpleasant.

Not only do people still go to Villa Sorriso, they line up and pay a cover to get in on the weekends. The mind, it boggles.

I'm trying to remember the last time I paid just to go into a place in Old Town (and spend more money.) Not for something specific like a pay-per-view soccer game at Lucky Baldwin's or the Silver Surfers at the Old Towne Pub, but a cover just to enter the premises. It's gotta be close to a decade.

Yeah, the last time I paid to get into any place in Old Town was at OTP, like five bucks. I don't really mind paying to get in there if there's a band (even if I don't care at all for the band), it's the only place in Old Town left where garage-type bands play. The last bastion of anti-bougieness left here.