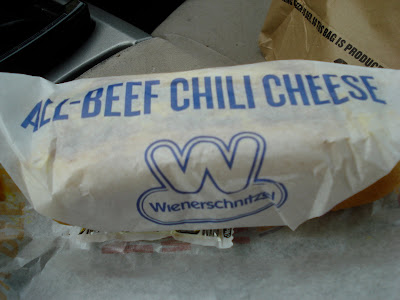 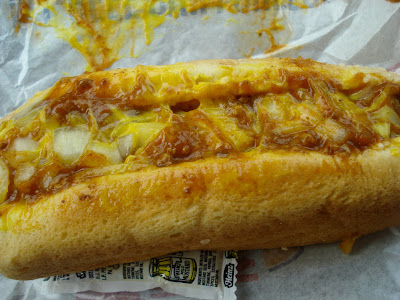 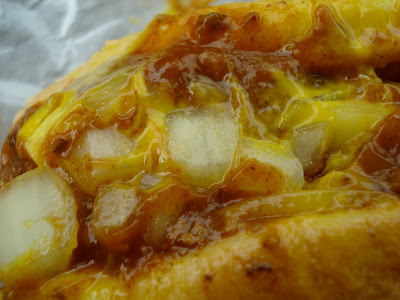 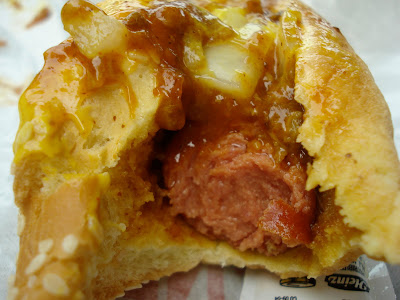 I may not always like Wienerschnitzel's promotions, but I like their hot dogs (and love their mini corn dogs) so I usually give them a try. When I heard about the Coney Island Dog, I was curious. I have been to Coney Island in New York (I've also been to Coney Island in Northern Ireland, to visit the site of one of my favorite Van Morrison songs) and I was not aware that there was a specific hot dog named after the area.
So I looked it up with a certain amount of trepidation. (Years ago I heard Jerry Orbach utter the phrase "Coney Island Whitefish" on Law & Order and I looked it up. I wish I hadn't.) But it's a hot dog with chili, onions and mustard. That sounded good enough to try. Hopefully it would be better than the Chicago Dog I tried a couple months ago.
I have a strange relationship with Wienerschnitzel's chili. Actually, that sounds weird. I don't really have a relationship with it. But sometimes I have had it on products and thought it was great. Other times I have eaten it and thought it tasted like burnt meat with chili powder.
I headed down to the Wienerschnitzel in Alhambra. I like this one, it reminds me of the couple times I ate at Wienerschnitzel as a kid: the pitched roof, outdoor-only seating, and the so-dirty-it's-almost-illegible menu board. There was probably a 20-year span during which I did not eat at Wienerschnitzel, and a lot of the units that sprung up (or took over other fast food locations) do not have any of these features. Some of them are actually clean. It's as bizarre as eating in one of the newer In-N-Out units that have indoor seating.
This was in the late afternoon on New Year's Eve (I was on my way to the airport) and there wasn't another person there. Normally that Wienerschnitzel is always packed; at lunchtime the crowds may rival Philippe's (perhaps the only thing the two places have in common.) Still, I wasn't prepared for what happened when I ordered: I was handed my hot dog in about ten seconds.
"Did you just have one sitting there?" I asked.
"No," the lady laughed, "we just don't have anything else to make."
I took it to my car. This was, after all, late December, and it must have been at least 65 degrees. Way too cold to sit at an outdoor table and eat. Also I wanted to catch the end of the UCLA basketball game on the radio. I have to admit, when I opened the hot dog I was not impressed. The mustard and chili melded together into a bizarre shade of neon lime, reminiscent of the slime my grandmother used to buy me from the vending machines at Ralph's when I was a kid.
I was seriously debating whether or not to try it. But, of course, I did. It was not as bad as it looked. (As if that would have been possible.) The wiener itself, like most I have ever had there, was very good. But the toppings just didn't go together very well. And the chili was lukewarm, which makes me think maybe it was just sitting out under a heat lamp waiting for someone to order it.
I will not be ordering one of these ever again, that is for sure. But I will try the next promotion Wienerschnitzel comes out with.
Posted by JustinM at 10:57 AM

I don't think there's any way it could have been as bad as it looks....

The picture looks so good on their website! Of course, expecting a $1.79 fast food hot dog to look as good as advertised would be like expecting Kobe to miss a contested shot and not complain to the ref. But the disparity was as big as any I can remember since the Jack in the Box "taco nachos."

I guess that beats lobster tails and champagne on New Year's Eve, eh?

Well, that might have been a little weird if that was my actual dinner, I suppose. I picked up my better half at the airport and we went by Whole Foods and got sushi for dinner. I was asleep before midnight for the 5th year in a row. And, for the first time since I was a junior in high school, I did not have a single drink on New Year's.

Tell me your only part in this, anything but a hot dog, was as the photographer

The reason you've never heard of a Coney Island Dog in New York is because they come from Detroit. Wienerschnitzel really screwed up the marketing on this one.

I agree. I learned that about the Coney dog about one year after I wrote that review when I saw Food Wars, but back in January of 2010 I had no idea. It would have been nice for Wienerschnitzel to have informed me.

Even worse is that the promotion is back and still calling it from NYC.

Have you ever had the real deal in Detroit? (I've never been there.) Those looked damn good on Food Wars.

Lived in Detroit for 8 years. Went to both places that claim to be the original (American & Lafayette). I prefer the chili at Lafayette more. I want to try the Wienerschnitzel take, but I'm afraid of the letdown.

Have you tried the Coney Island restaurant in Hollywood? Supposed to have real detroit-style coneys

No. It's been many years, long before the blog, since I felt like venturing west of the San Gabriel Valley more than a handful of times per year. But I've heard good things about the place.