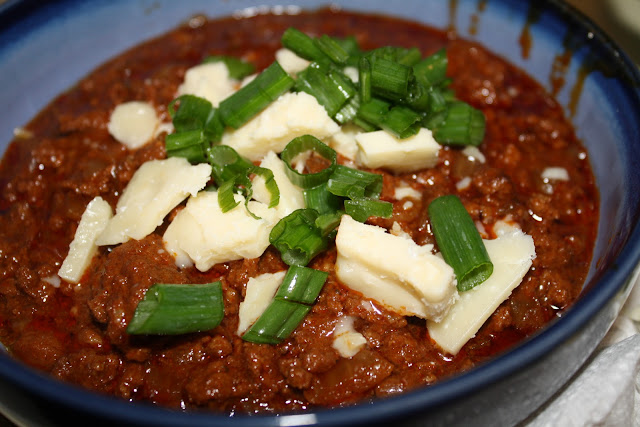 Yesterday was one of the most exciting days I've had all year.

As is my routine, I woke up and turned on ESPN, only to find within five minutes a report that the Angels had signed Albert Pujols, perhaps the best right-handed hitter of the last 80 years.

But that's not what I'm talking about.

The Lakers traded for Chris Paul, landing a truly great point guard for the first time in two decades. (The trade was later vetoed, although I don't think we've heard the last of this one.)

But that's not it either.

No, when I was at Whole Foods, I found this: 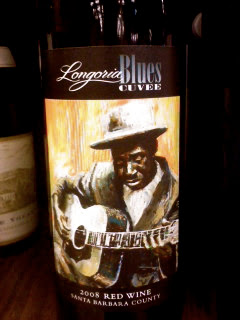 A bottle of Longoria Blues Cuvee.

In the summer of 2008, Elizabeth and I went up to the Central Coast with our friends Dave and Min the weekend before my 30th birthday. We visited several wineries, had a picnic with some food we picked up from the Los Olivos Grocery, played a little bocce ball at Laetitia - as relaxing a location as I have ever found in America - and had dinner in Morro Bay on the water. A list of the five best days of my life would include that one.

We stopped at Longoria in Los Olivos. We were all carded - in scores of winery visits, the only time that has happened to me - and we strolled out to the gardens to sip wine. A jazz guitarist was playing, the flowers smelled like summer (I have no fewer than a half dozen photos of Elizabeth smelling them, though it has been made clear to me that publication of any of them would not be a good idea) and we lingered for quite a while.

Our favorite of the wines was the Blues Cuvee. It tasted delicious, of course, but even cooler were the labels: each year an artist is commissioned to create a label indicative of an old-time blues musician. The label we had that day was called "Cry the Blues."

In 2009 I was back up in the area for a wedding. Elizabeth was the maid of honor, staying with the bride the night before the wedding, so I had the whole morning to myself. I went back to Longoria. It was closed, hosting a party, perhaps a wedding.

In 2010, we returned with Dave and Min to the area, this time for Elizabeth's 30th birthday. Longoria was one of our top destinations. Again, closed for a private party.

Since then, I've looked in many places for the wine, even calling a few. I could not find it anywhere in the Pasadena area. Then yesterday, while my phone was exploding all day with texts messages from friends wanting my opinion of the Angels' acquisitions (I won't go into them here), I went for a walk. I had already put the chili in the slow cooker and decided to go by Whole Foods to find a really good cheddar to accompany the finished product. Just for the fun of it I looked at some of the wines. And there it was.

I briefly explained the situation to the bagger when he asked me if the wine was any good.

"It's kind of expensive, isn't it?" the clerk asked me. (I got a kick out of a Whole Foods employee claiming something was expensive. For the record, it was $31.99, by no means cheap, but this is a store that sells tiny bags of beef jerky for ten dollars. Hell, the cheese I bought, a five-month aged cheddar, was twenty dollars per pound. 32 bucks for a bottle of wine doesn't seem terribly over-the-top, especially when I consider I haven't had any in three years and, thanks to my friend and neighbor Tim, I haven't paid for a bottle of wine at home in all of 2011.)

First, let's get back to the chili: I made it in my usual way. If you're not sure what I'm talking about, you can check it out here.) But with one new wrinkle. 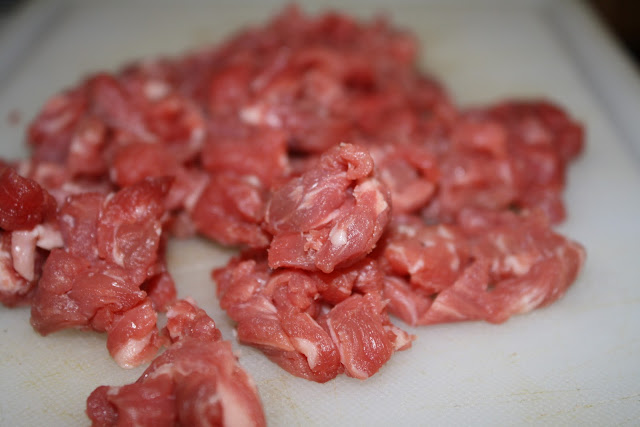 In addition to the ground beef, I diced up a tri tip strip steak that I picked up at Taylor's and added that, just for some extra beefy flavor. 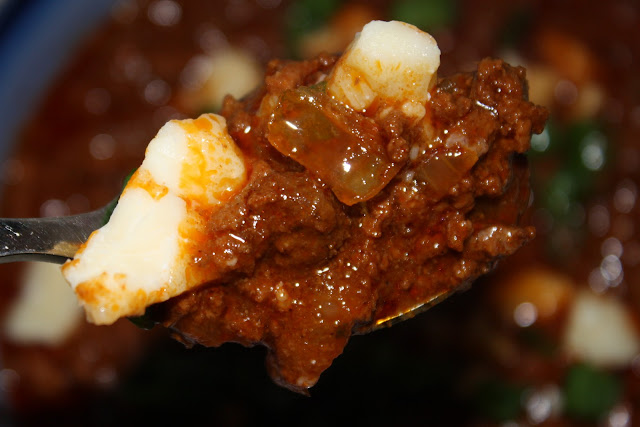 After about eight hours in the slow cooker I added the aged cheddar and some diced green onions. It was fantastic. Tracie was over and she said she didn't want any. (She has co-workers coming into town for her office Christmas party and she claimed her eating chili would not be good for them... actually, she was much more descriptive than that, and she told me I could repeat her words on the blog, but I will not.) But when I brought out my bowl and gave her a bite she said "Wow, that's the best chili you've ever made." And she had several more spoonfuls.

I ate two bowls, and I might just have another for breakfast.
Posted by JustinM at 11:04 AM

I make a chipotle chili and use smoked gouda in it. The flavors are fantastic together.

That sounds great. Elizabeth doesn't love chipotle like I do, but one of these days when she goes out for one of her fancy work dinners I will make that for myself.

What kind of cheese is twenty dollars per pound?!!!! How much did you buy?

Your chili always looks so good.

Dude, a little compassion for us Cards fans, eh?

Anon: Black Diamond reserve cheddar. I bought a smallish piece, only a third of a pound.

There is only so much compassion I can muster. The Angels have been without their best hitter for two years because he broke his leg celebrating a walk-off home run, and they lost their best pitching prospect of the last decade to a drunk driver, hours after pitching the first great game of his career.

and tracie's co-workers were found dead this morning!!!

Mmmm, I want that on a hot dog!

Am I missing something...there's more to this post right?