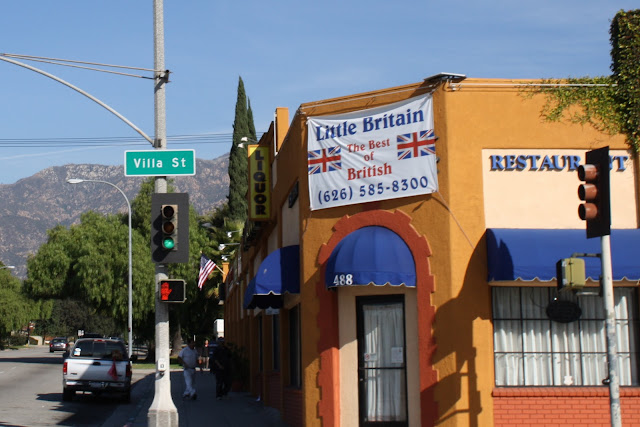 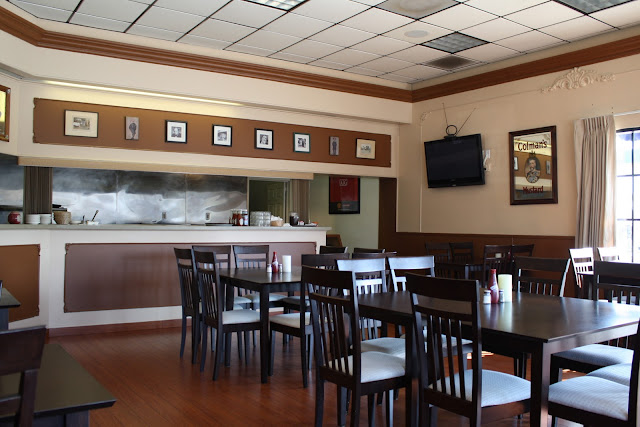 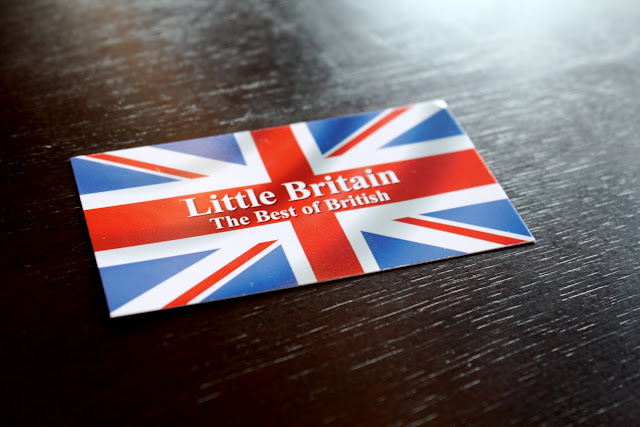 Back in 2003, a guy came into my work wearing a t shirt that read "Brits: Warm Beer, Lousy Food." I laughed and asked about it; he said it was a new English pub-style restaurant on Colorado Blvd and that the beer was cold and the food was great. Not long after I stopped by and had a good laugh: there wasn't actually a bar. It was just a restaurant. But I had the fish & chips and they were very tasty.

A few months later I stopped in again because I'd heard they'd built a bar. And indeed they had. But there was no Guinness. I considered having food again but back in those days I was quite loyal to Guinness and couldn't imagine having fish & chips without. (Nor, I suppose, could I imagine having fish & chips without beer.) So I went elsewhere. And I don't think I ever went back.

Last year, Brits closed. But in August they opened up again as Little Britain on the corner of Allen and Villa. (For years I remember lettering on the flesh-clored building that read "Armenian Palace," though I never once stopped by, having always been satisfied with the basturma just up the street at Garo's.) Tim - who was a loyal patron of Brits - and I stopped by the other day for lunch. There was no one else in the place. They again do not have a bar - or even a beer/wine license. The owner told us we could duck into the liquor store next door and pick up a beer to go with our lunch, but neither of us were in a mood for alcohol. (Rare, but it happens.) 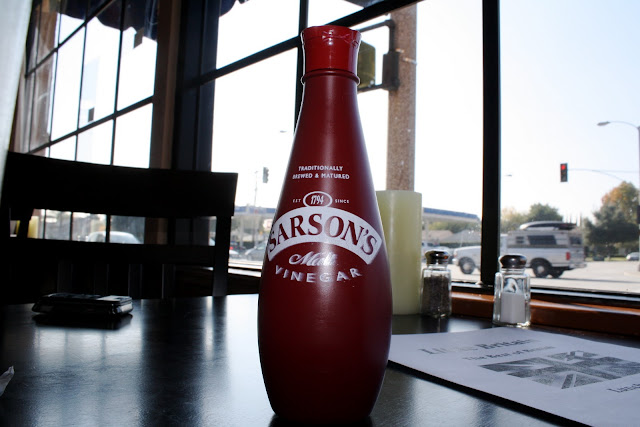 I'd never heard of Sarson's malt vinegar, but there was a bottle of it on every table. Apparently it's a vinegar created in the 18th century in London. You learn something new every day. 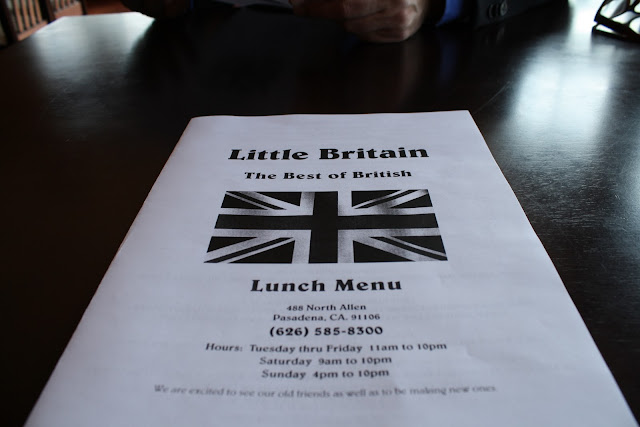 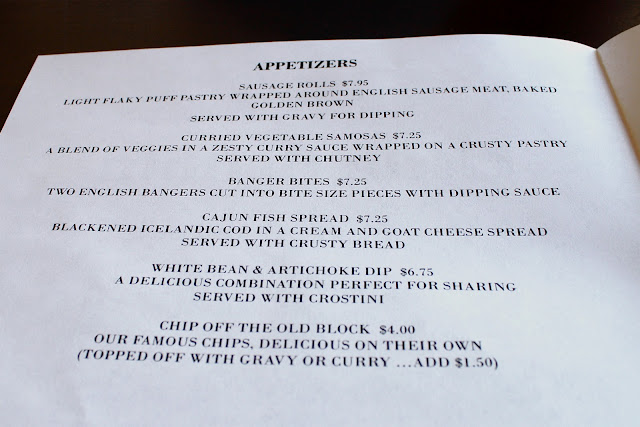 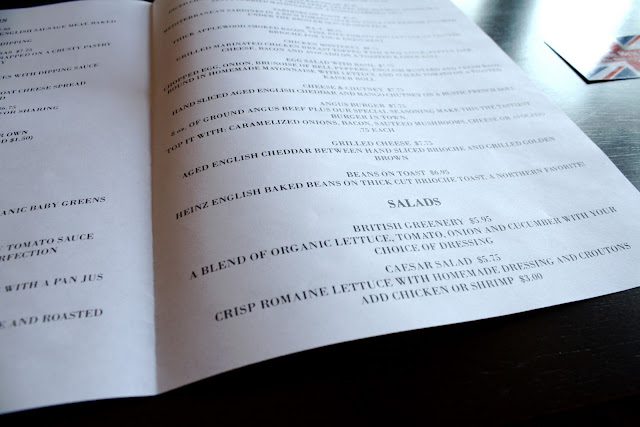 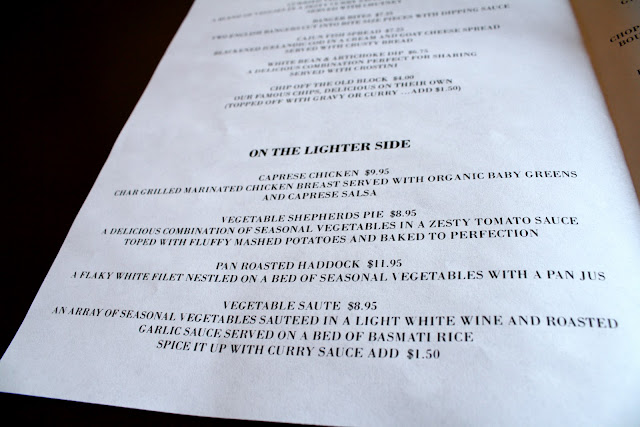 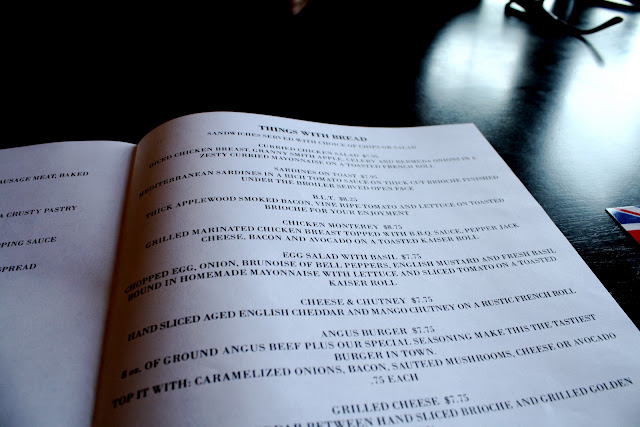 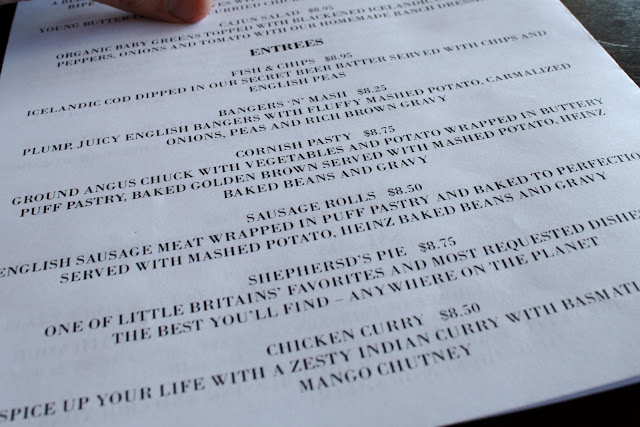 The menu at Little Britain is larger than I remembered the Brits menu being. (But I could be wrong - it had been many years.) The "cajun fish spread" appetizer caught both of our attentions: blackened cod in a cream and goat cheese spread. We decided to start with that. 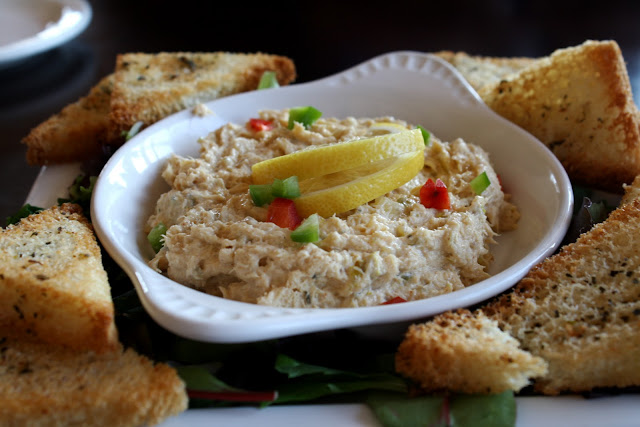 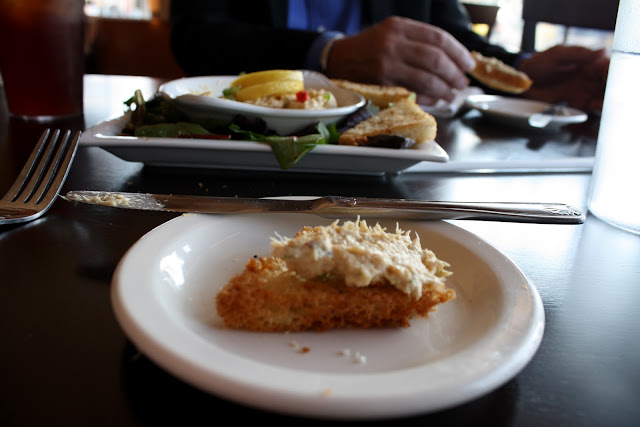 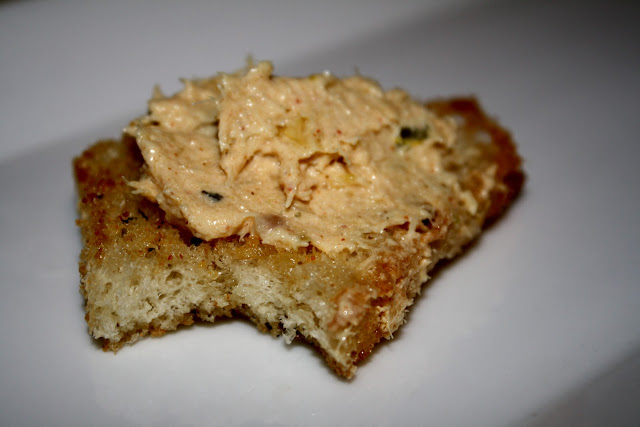 It was a really interesting dish. Around the edges of the fish spread, it was a little bland, resembling tuna salad. But once you got into the center of the spread, the cajun flavors really kicked in. There was a wonderful spice to it and we both loved it. The crusty bread pieces were the perfect vehicle for delivering the spread. 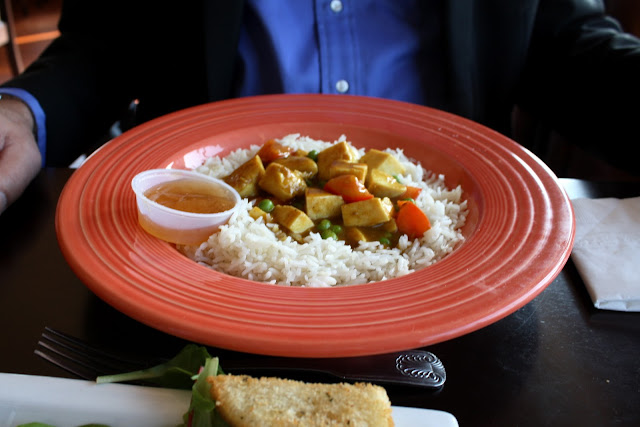 Tim decided he felt like a curry, so he got the chicken curry and he said it hit the spot. 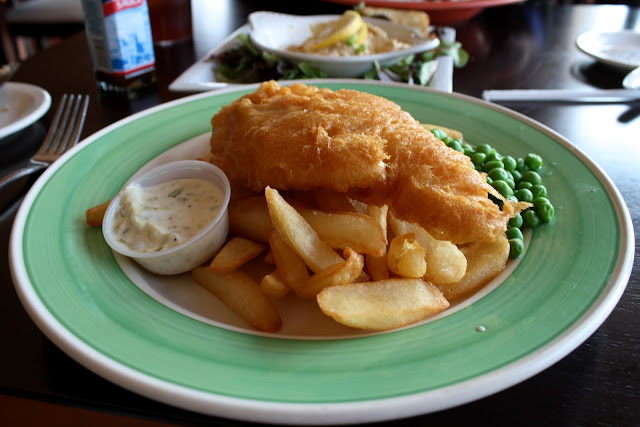 But there was no question I was going to be having the fish & chips. I'd been craving fish & chips for a couple of weeks but hadn't gotten around to having any. The chips were very good: hot, crispy wedges of potato. 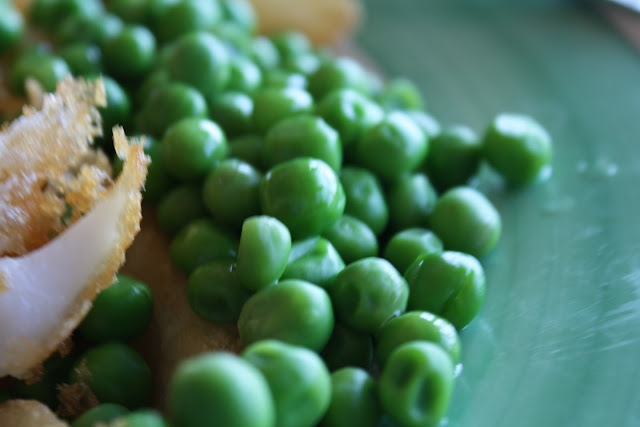 The peas were... well, peas. I like peas, but I certainly understand people who don't. In a setting like this, I douse them with malt vinegar, and sometimes a drop or two of HP Sauce. 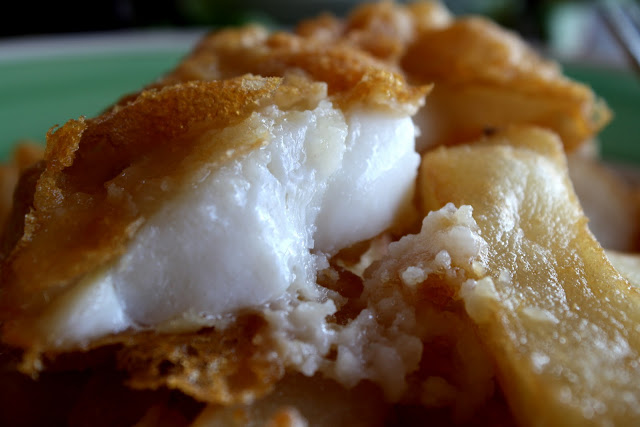 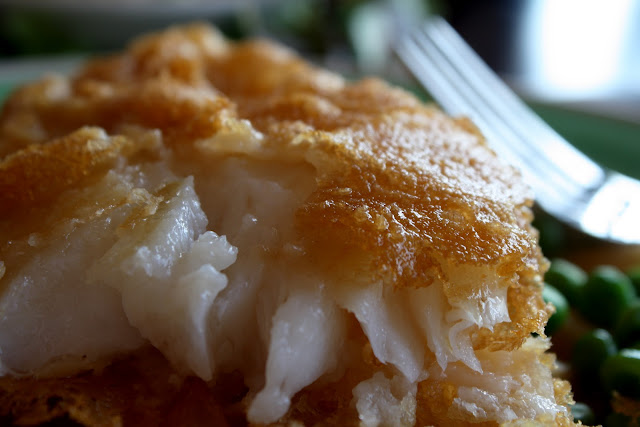 But the real star here is the fish. I don't order fish & chips much anymore, because far too often I am served a disappointing, soggy, greasy hunk of fish. This fish was beautiful: moist and flaky cod enveloped by a light, crispy batter. I'm not sure how they make the batter but it binds to the fish as gently as any batter I have ever had. It doesn't interfere with the taste of the cod but provides a light crunch in every bite.

It was a very nice lunch. There are a few items on the menu I look forward to trying in the future, although it will be hard not to order the fish & chips every time I return.
Posted by JustinM at 10:00 AM

I love fish and chips but hate the greasy batter. This looks perfect.

Justin, didn't you joke about Albert coming to the Angels? You nailed it man! Here in STL reaction hasn't been too friendly... Anyway, those fish-n-chips indeed look delish.

I did joke about it. I didn't think it would happen because I thought: 1) it would take a monster offer to get him out of St. Louis, and 2) I didn't think the Angels would make that offer.

I was right about the first one, wrong about the second.

The last five years of this contract are going to suck, but the next 2 or 3 years will be fun indeed. (For me.)

I don't even know where to start with how wrong this is.

And sausage rolls with GRAVY?

Are you aware of places in California that sell Sarson's? If not, I'm not sure why you're so incredulous.

Sarson's is extremely rare in California restaurants. We see oceans of Heinz and the occasional spotting of a Crosse and Blackwell bottle. I suppose this points to the authenticity of Little Britian (with the exception of the gravy w/sausage rolls, which, BTW, is very common in California/English pubs).
Sarson's Malt Vinegar, $2.99 for a 300ml bottle (as pictured) at Amazon.

I see that you had one extraterrestrial pea, right in the front of the bunch. Do you think it was planning on taking over the world with its cohorts until you ate it?

Justin, theat fish looks awesome. I would have gotten gravy for those fries.

Hi Rob. I've never actually ordered gravy with fries, but whenever I'm with friends and they do it, I try it and say "Yeah, that's pretty damn good."

I took my parents to Brits a few years ago and didn't know it closed. My Mom lived in England for a while as an exchange student (it's where she learned English actually) so still loves authentic English food. Thanks for the info on the new location; I'll take her there next time she's in town.