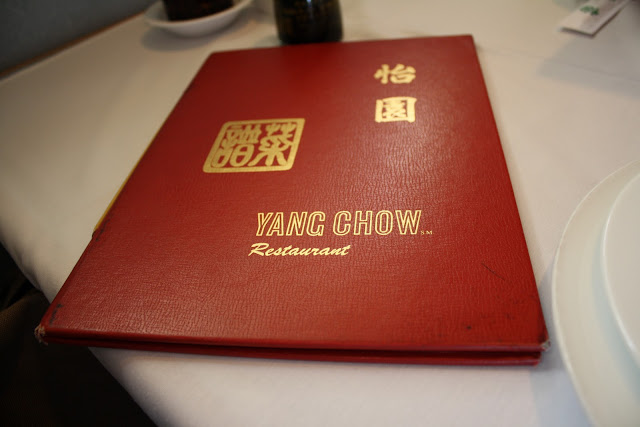 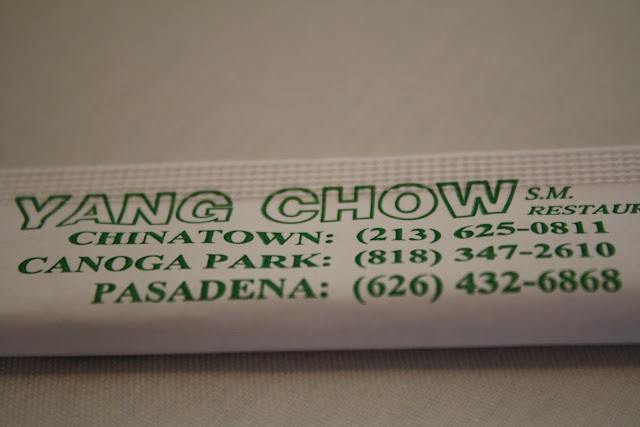 What if you had to choose five foods from restaurants in the area in which you live, and those would be the only things you could ever eat again while dining out? You could still make whatever you want at home, but when going out for the rest of your life, you could only have one of those five items.

I thought about this one for a while. (I won't say how long, it's slightly embarrassing.) Although I make pretty good burgers at home, there is no way I could leave the Hutch's hamburger off the list. I could forsake the Double-Double, and thanks to Green Street Tavern inexplicably removing the wild boar burger from its menu I don't have to worry about that, but I can't imagine living without a Hutch's hamburger. I once had my jawed wired shut for several weeks and that burger was all I could think about.

The Philippe's turkey french dip would also make the cut. And, since I'm rarely able to make proper Belgian fries at home, I would have to choose a place that makes them well. I will go with Oinkster. (The first time I had Wurstkuche's fries they were the best I'd ever had but the second time they were terrible, so they don't make the cut.)

I'm tempted to pick a pizza place but I won't for two reasons: there are some really good pizza joints nearby, but none that I would call great. And I make pretty good pizza at home (not to mention my friend Tyler's amazing outdoor pizza oven); I could do without pizza at any restaurant. So my fourth pick will be something that I never seem to be able to make properly, the crispy beef at Yujean Kang's.  And I'm pretty sure I know what my fifth selection would be as well. But we'll get to that in a second.

I've written about Yang Chow a couple of times before, though not for two years. When I was a teenager I used to eat at Yang Chow every so often with my family. In my 20s such meals became less frequent, especially as I discovered the joys of taking the metro down to Chinatown and having dim sum with friends at Empress Pavilion. These days I probably only eat at Yang Chow once every couple of years.

The other day I was over at my parents' house, cleaning patio furniture and moving around some things in preparation for a dinner my mom was hosting the next day. As thanks, my mom offered to take me out to lunch and asked me to pick three places. I selected The Oinkster, El Patron and Yang Chow. She said the last one sounded best to her. 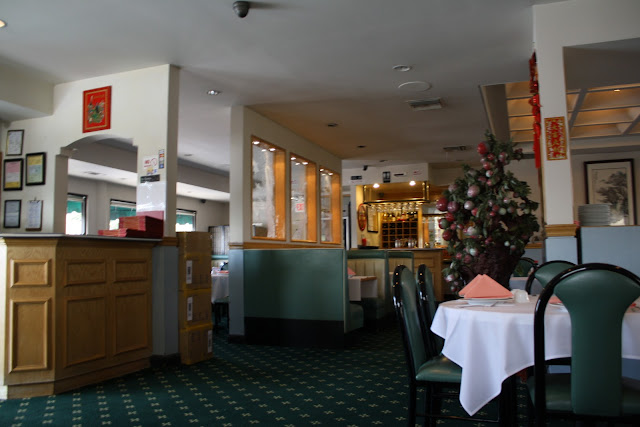 We got there just after they opened, were the first customers, and took our choice of booths. 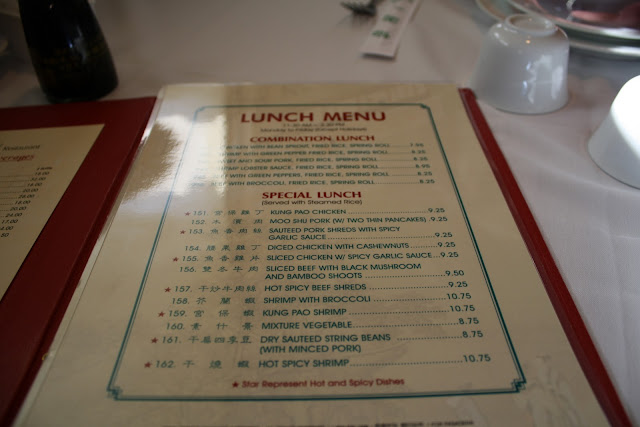 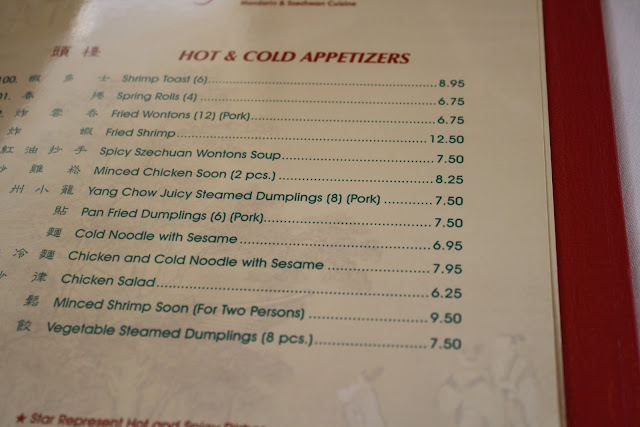 There is a small lunch menu with a few items on it, but none that sounded good to me. However, I love some of Yang Chow's appetizers - particularly the Minced Chicken Soon. But I did not order that on this day, my mom and I decided to share some spring rolls. 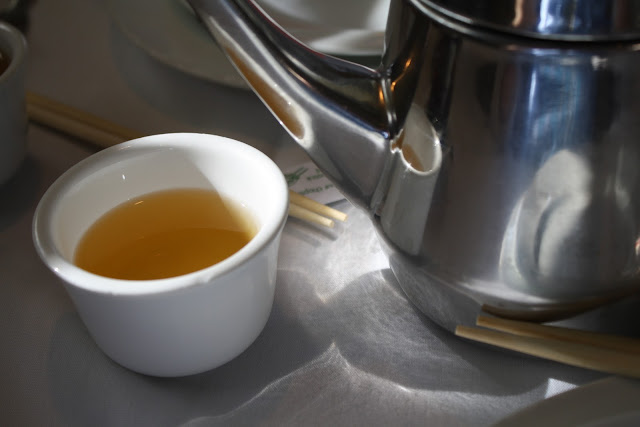 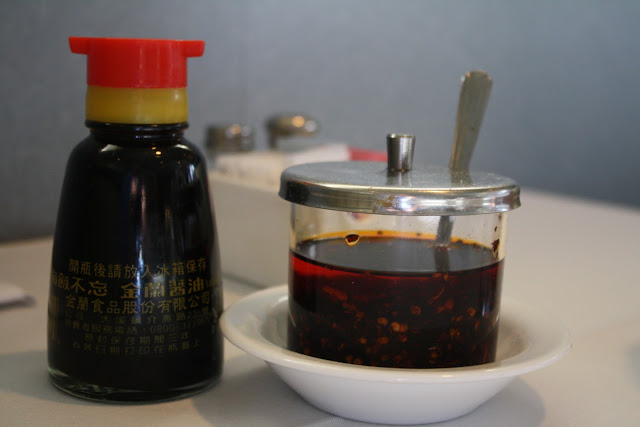 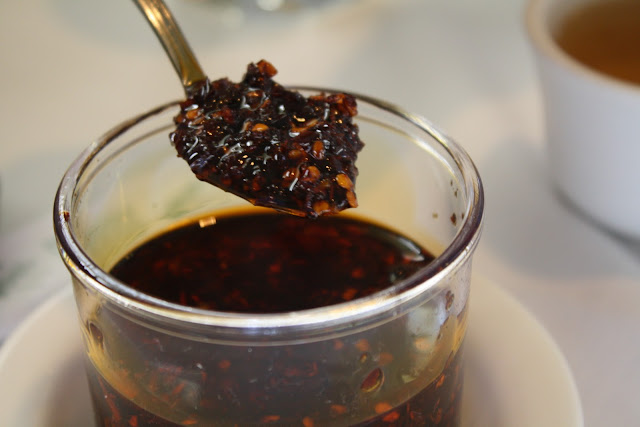 I'm not entirely sure that any of the above pics ad to the experience, but I was really hungry and just trying to keep busy while waiting for food. 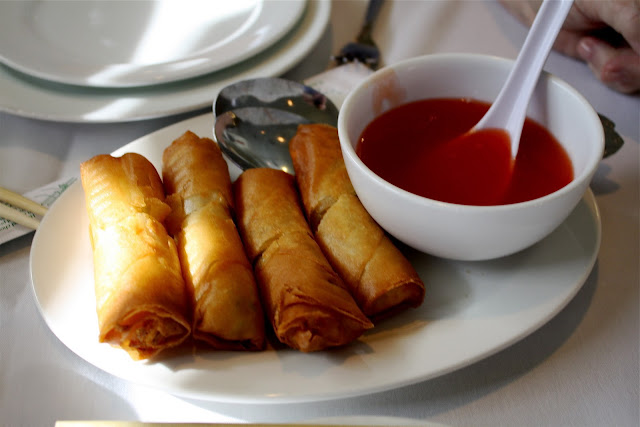 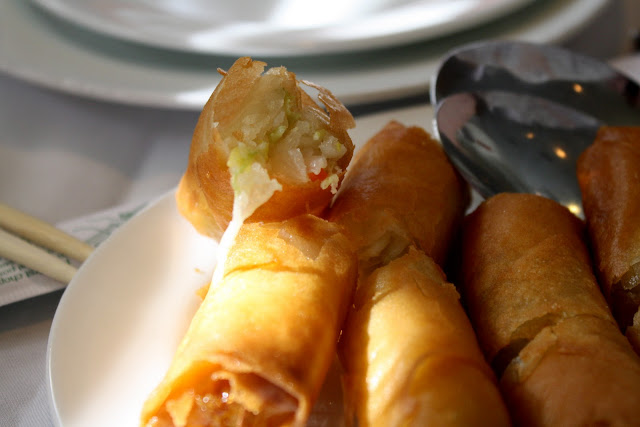 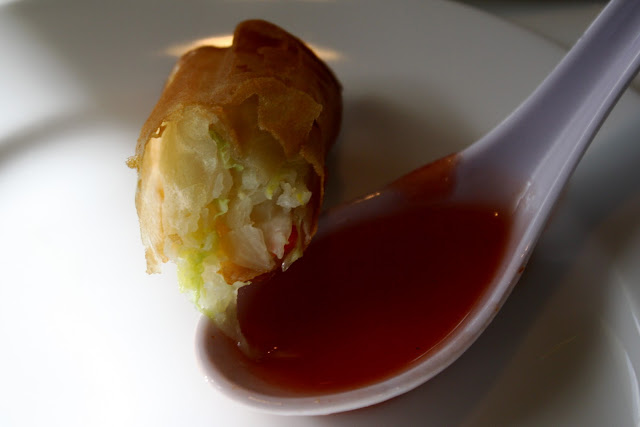 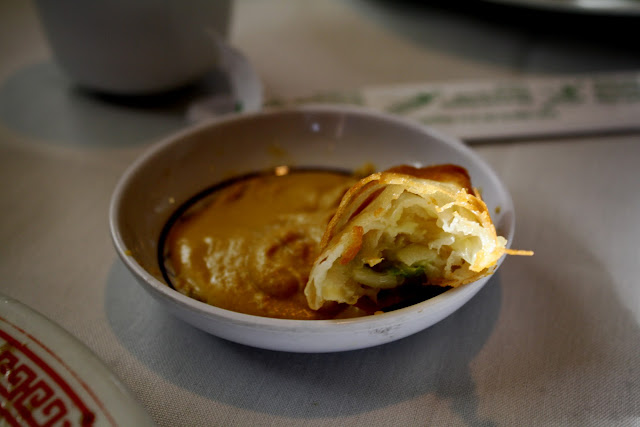 The spring rolls were adequate. They were very hot and crispy, but unfortunately they didn't have much flavor. As usually is the case at Chinese restaurants, the sweet & sour sauce was only sweet, no sour. So I requested some hot mustard and it was outstanding: nostril-flaring, tear-inducing hot. 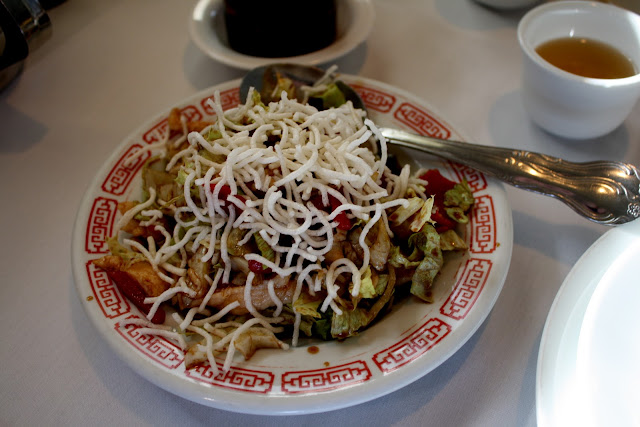 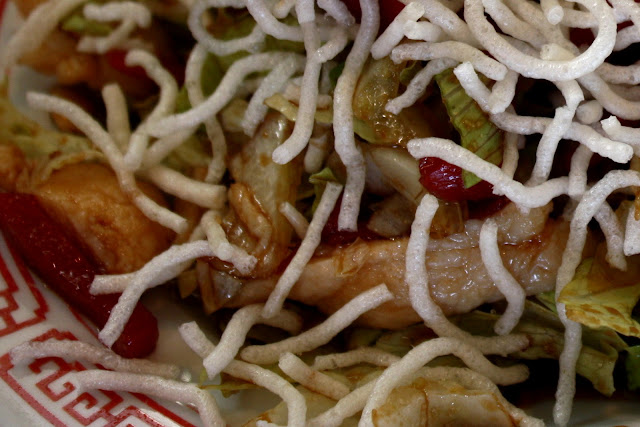 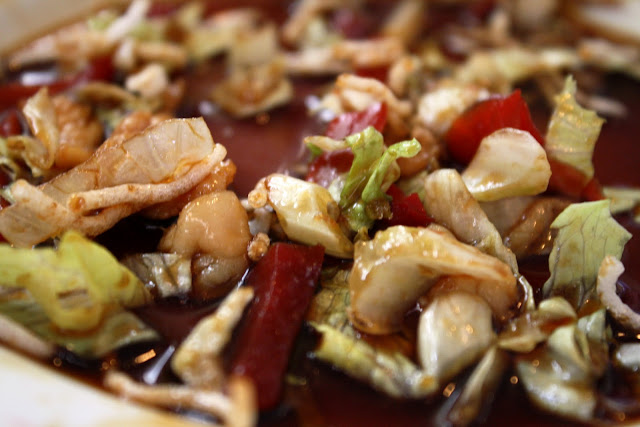 The chicken salad at Yang Chow is my favorite Chinese Chicken Salad I have ever had. The dressing is both sweet and spicy. I could drink it, and indeed I pick up every single morsel of food off the plate so that I can soak up the dressing. 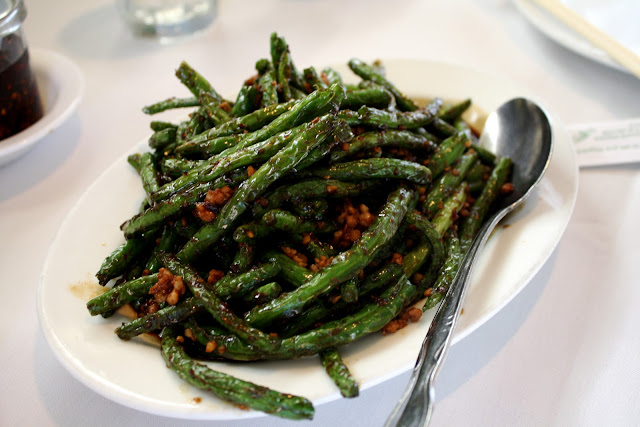 My mom ordered "dry sauteed string beans with minced pork." I'm sure I've had these before but I do not remember them. They were outstanding. 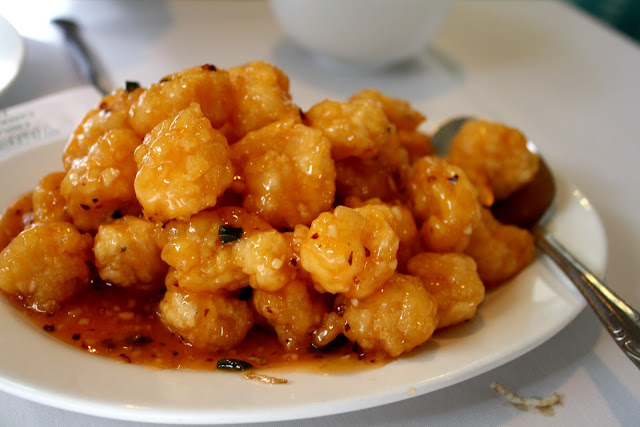 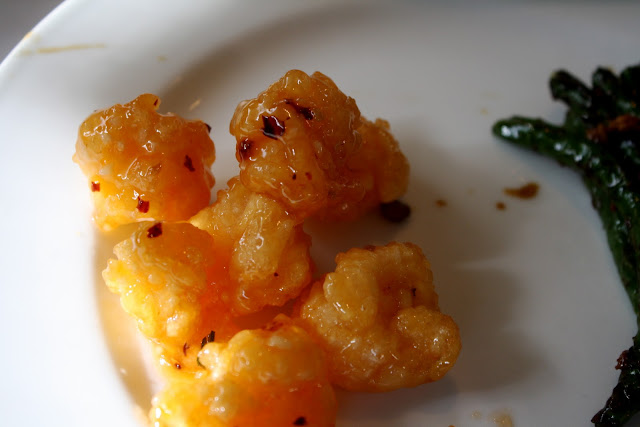 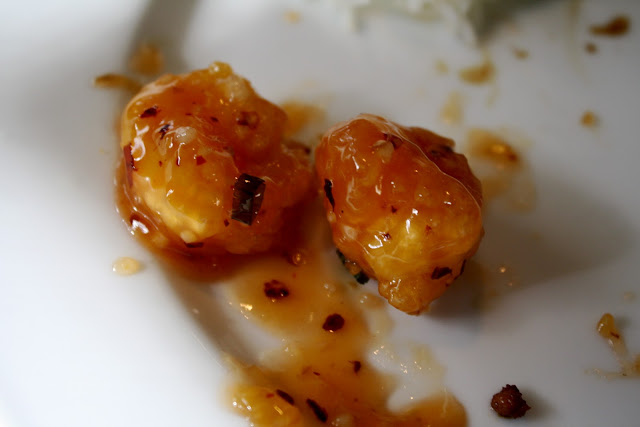 And here we have Yang Chow's Slippery Shrimp, one of the five things that I would choose to eat for the rest of my life. There is nothing particularly revolutionary about them: they are rock shrimp tossed in corn starch and fried, then tossed in a sauce consisting of ingredients that most people have in their pantry. It is quite sweet, which normally I would loathe, but something about the combination of ingredients here just works. The shrimp are always cooked perfectly and the pleasant taste of ginger is abundant.

I always feel relatively full by the time the shrimp come around (after eating all the appetizers) and usually after half a dozen shrimp I am full. But I still keep eating. There are very few things I have ever eaten that I have found more addictive than these. (But I always leave a few to take home; once they are cooled down in the fridge they are just as good and in some ways better.)

I do not visit Yang Chow nearly as much as I used to, but I still find myself there once every year or so with a strong craving for the slippery shrimp. I don't see that ever changing.
Posted by JustinM at 10:00 AM

Oh my god, I love the Slippery Shrimp...It is truly my favorite shrimp dish of all time from any restaurant. Your post is going to give Yang Chow's some more business this week! You're right about the simple ingredients and how they come together like magic.

Wow PP, no In-N-Out. Yes, you do make amazing burgers but the In-N-Out burger - the experience - is unique. Their burger is absolutely unique in its taste, so full of umami...But I understand; there are only 5 spots and one must choose very carefully.
Mine might look something like this -
1. Enchiladas Mole, red or green (La Cabanita)
2. Rustic Country Pate (Pinot Bistro)
3. Lamb Shish Kebab (Raffi's Place)
4. Pastrami on Rye (Langer's)
5. Lentil Salad (Nicole's)

The lentil salad should be easy to re-create, I know the ingerdients (french lentils, hazelnut oil, raspberry vinegar and shallots, but I can't cook a lentil to save my life.

Nosh: The In-N-Out burger is amazing for a fast food burger, but as far as burgers overall I would consider it just a good burger. It's also got plenty of clone recipes on the 'net and, with the exception of the buns, I don't think it would be too hard to replicate.

Never thot of Hutch's as a burger joint. Now u got me wanting to ck out their burgers. Are u talking about a turkey burger or which one exactly??

And I couldn't leave what may be my fav single food item - Pizza -off my last supper menu.

Neither could I, but this wasn't a last supper list.

have you had their spicy wonton soup? if i had to pick one soup i'd eat the rest of my life, this would be it. it seems to be a hidden gem on their menu but it's so incredible i can't describe it.