Weekend Eats Through My Cell Phone 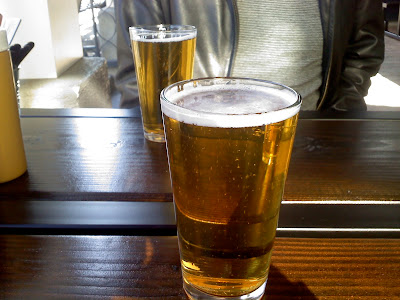 I met up with my friend Dave to go out to lunch for the first time in a few months. I asked what he was in the mood for and he said anything, preferably someplace informal where we could relax and talk. I suggested Dog Haus Biergarten. He had not yet been and he said that sounded awesome. He was even more impressed when he learned they still had the bar from red white + bluezz. It was a gorgeous sunny day and we got ourselves two pints of Bitburger. 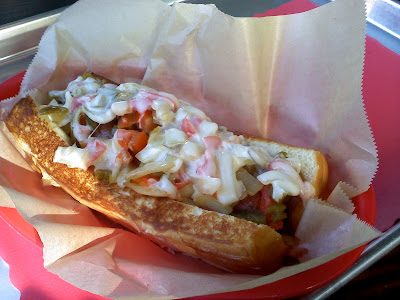 This was Dave's first time at either Dog Haus and he ordered the El Mariachi: a hot dog with white American cheese, grilled onions, pickled jalapenos and red bell pepper. He absolutely loved it, proclaiming at the end of the meal it was probably the best hot dog he has ever had. 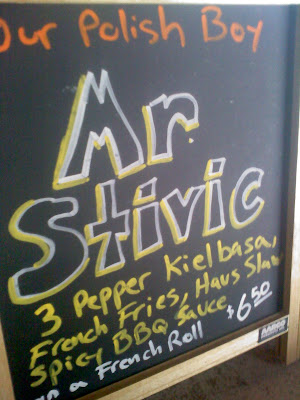 I went for the special dog of the day: a kielbasa with fries, slaw, and spicy barbecue sauce on a french roll. 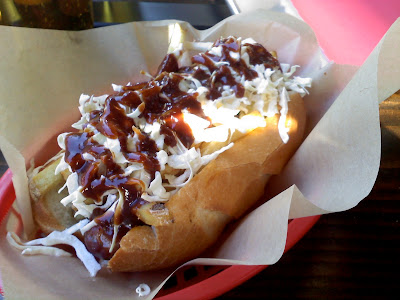 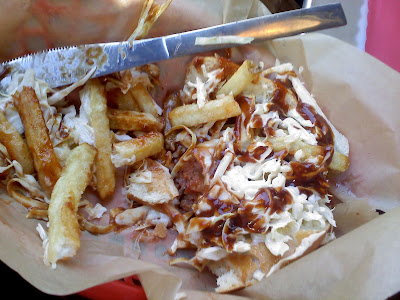 This was fantastic. I've said it before and I'll say it again: I don't eat enough sandwiches with fries inside them. The sauce was spicy and it played beautifully off the creamy slaw. Even though I was quite hungry, there was no way I could finish this thing. (Elizabeth helped me finish it when she got home from work, and she thought it was great, too.) 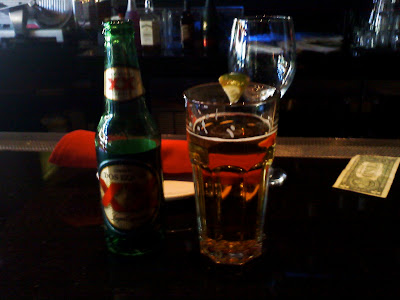 I did some Christmas shopping of my own in the afternoon and needed a beer. I stopped by Bar Celona for a Dos Equis, which hit the spot. 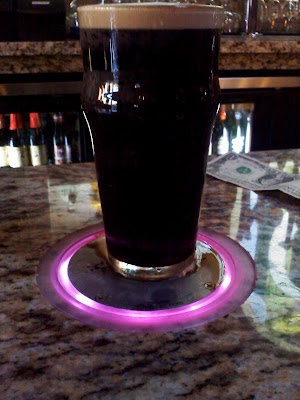 I was all set to head home but I got a text from a friend of mine (whom I have not seen in weeks) that he was going to stop by Congregation Ale House for a beer. Since it was on my way home - and I was walking - I figured there was no harm in popping in for a pint or two. The Guinness there is good but the main reason I am including this picture is the discs they have inlaid in the bar that keep your beer cold. Sometimes I feel like I'm a stranger in this world. 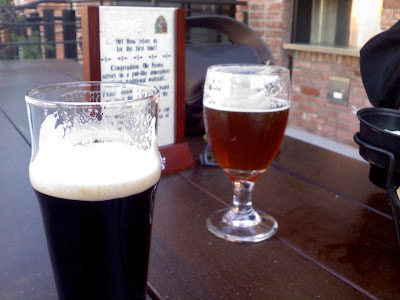 Speaking of Congregation, the next day my friend Carla sent me a text that she had the day off and asked if I wanted to have lunch there. I said of course. I had another pint of Guinness while she had a Scaldis Noel. 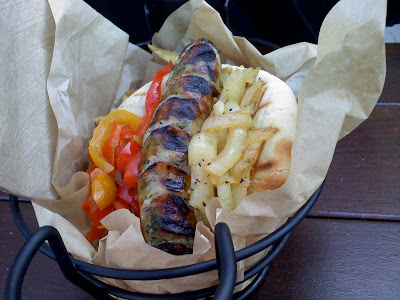 Carla had a pork and goat cheese sausage on flatbread with grilled peppers and onions. She said it was very tasty. 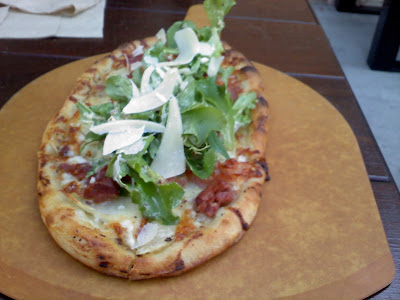 I also had a flatbread with prosciutto, Parmesan and arugula. It was quite tasty although I could not finish it after I devoured the fries. 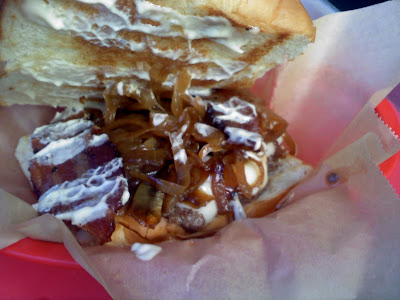 I went shopping with Elizabeth to one of my least favorite stores (DSW) in my least favorite mall (Paseo Colorado) around. Then we went to Sephora. Then Urban Outfitters. Then Forever 21. Believe it or not, those were all stores she wanted to go to, not I. But afterwards she told me we could go anywhere I wanted for lunch. So, not being in an original mood, I suggested Dog Haus. It was the middle of December and 73 degrees out; I wanted to sit outside. And she agreed quickly: she's been wanting to try one of their burgers for a while. She ordered the Holy Aioli and loved it. (But she could only eat half. Later in the day we went by my parents' house and gave my dad the second half, and he liked it as well.) 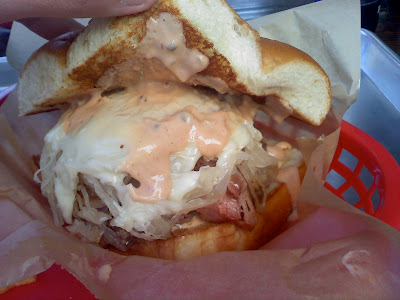 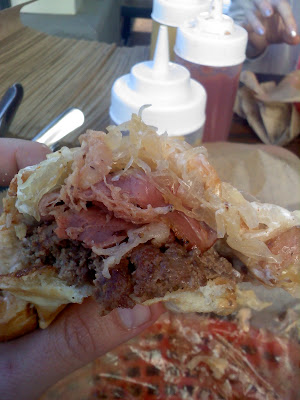 I ordered the Ruben's Cube: pastrami, sauerkraut, Swiss and Thousand Island on Hawaiian buns. This sandwich was delicious but massive. 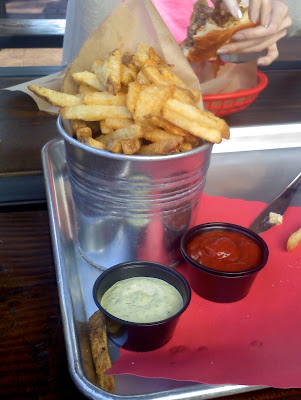 We got an order of fries to share - with spicy basil aioli and curry ketchup - but we couldn't even eat a quarter of them together. 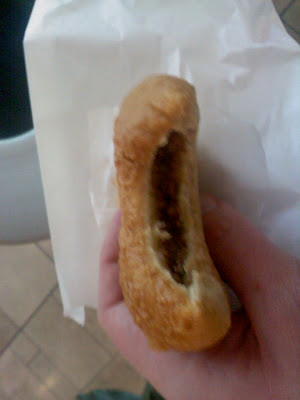 At the mall in Arcadia while doing some Christmas shopping, I stopped into Famima for a bottle of water. Just for old time's sake I got a pork bun: bulgogi. The filling was all right but the bun was horrible. I ate about half of it and threw the rest away. 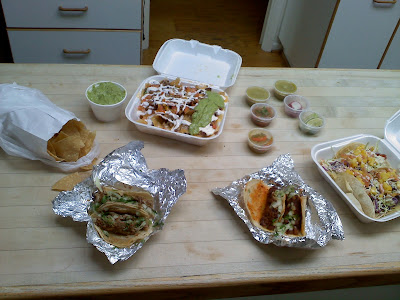 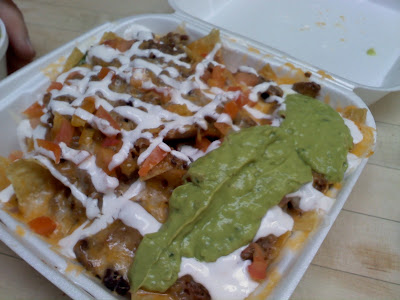 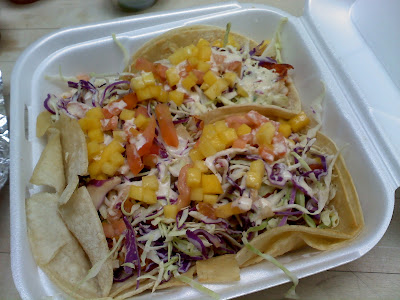 After shopping and getting out more Christmas decorations than I have ever seen in any place not named Stats, I needed some food. So I went by Taco Fiesta and got some carne asada nachos, al pastor and carnitas tacos, and those fish tacos that I love so much. Well, loved so much. When I first had them, they were the equal of almost any fish taco I have ever had. Each successive time they have gotten worse. This time they were not the slightest bit crunchy and they were almost bland. They weren't bad exactly, but they were barely what I would call average. I think I'm over Taco Fiesta now.

Not surprisingly, I was not hungry for dinner on Sunday evening. I heated up some leftovers but only ate a couple bites.
Posted by JustinM at 10:00 AM

I once had a girlfriend who loved going into Sephora. That didn't last long...

Good to see your survived.

I went to Congregation yesterday for "brunch". They serve their breakfast sandwich until 3pm on weekends. I had one of them with the added cheese and it was terrific, especially with a Scaldis Noel followed by an excellent Deschutes Obsidian Stout.
Owner Travis told me that he's on a Turkey Burger kick - that's all he eats there 'cause it's the bomb...I'll try that next.

pp, just curious- how do you eat those dogs? with your hands or with a knife and fork?

Adam: Yeah but did she take you out for burgers and fries afterwards? Because for me, that makes up for a lot. Everything, really.

Nosh: I will give that a try, too, one of these days.

Anon: With my hands. I'm not sure if I've ever eaten a dog with knife and fork. Maybe a really messy chili dog, but I just don't remember ever doing that.