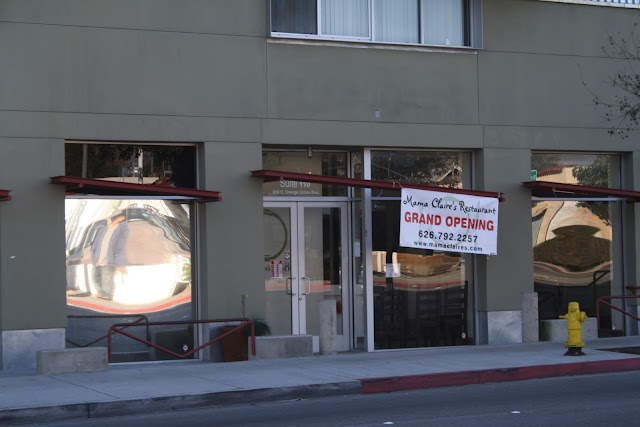 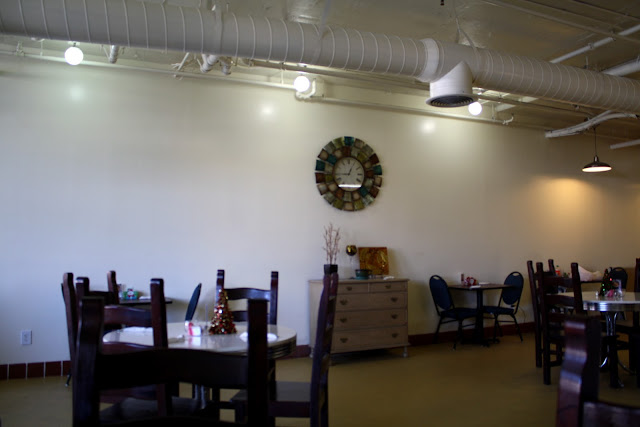 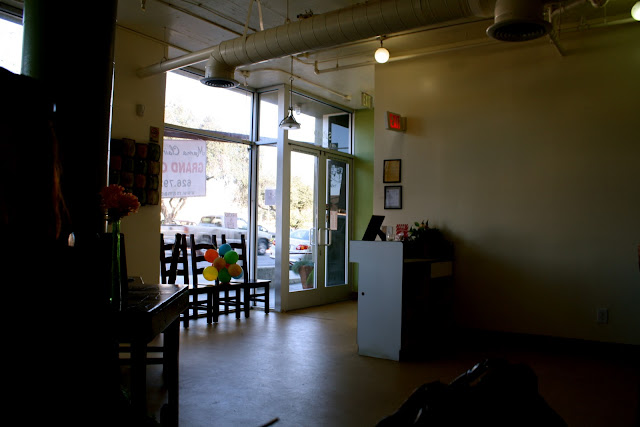 Sometimes all it takes is a little gesture to make everything all right. I will return to this thought.

Perdue's BBQ has been gone since the beginning of the year. In all but one of my trips there I really liked my food, even loving it a couple of times. But the service was about as bad as it gets - on more than one occasion I waited an hour to receive a pulled pork sandwich and fries. And I heard from some people that this could be considered a short wait. So I was slightly disappointed but not at all surprised to learn that they had gone out of business.

A couple of months ago, when driving past the vacated Perdue's location on Orange Grove just east of Los Robles, I saw a sign reading "Coming Soon: Mama Claire's Southern Food." I made a promise to try it soon, although I wanted to let at least a month go by before I stopped in. A couple of Saturdays ago, after tagging along with Elizabeth while she went shopping at several stores that held nothing for me (DSW, J Crew, H&M, and the MAC store, which I was disappointed to learn was cosmetics and not computers) she told me we could go anywhere for lunch that I wanted. (This is not to be confused with this past Saturday, when the exact same thing, including some of the same stores, occurred.) It was a chilly day and I'd had a very light dinner the night before. Southern food sounded perfect.

There was only one other table occupied. The walls and decorations are very sparse; hopefully they will add a few more touches as time goes by. (The Negro Leagues memorabilia on the walls at Perdue's were some of the best 'cue joint decorations I have ever seen.) 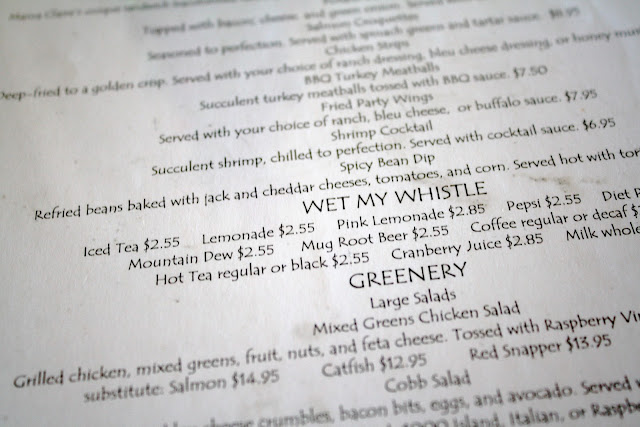 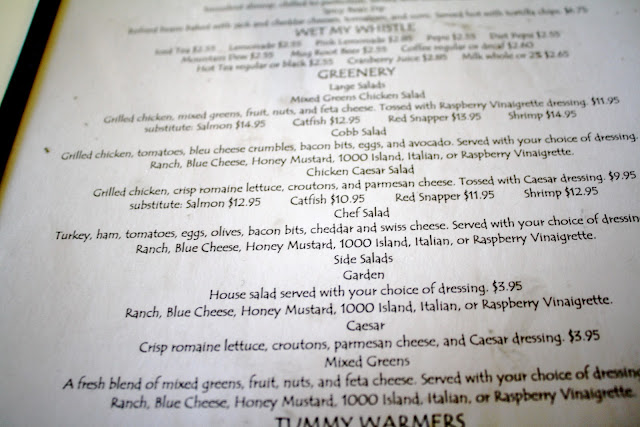 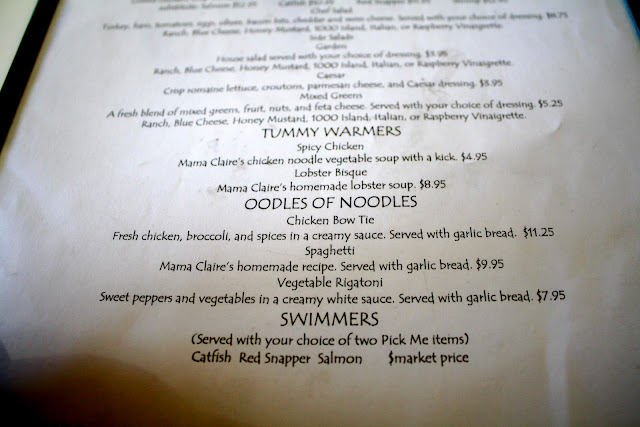 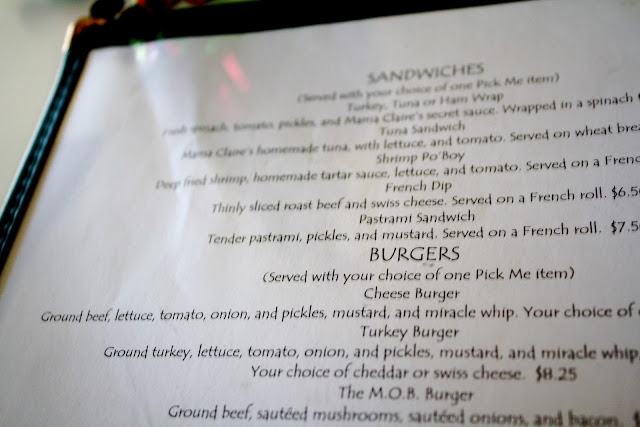 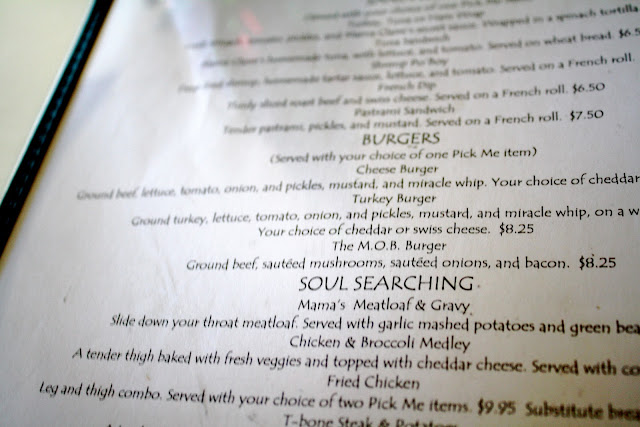 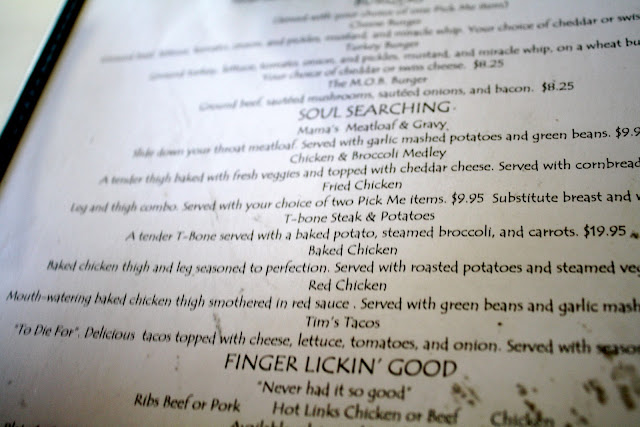 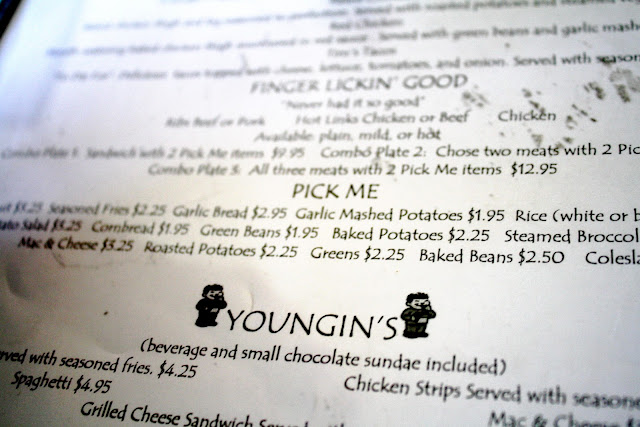 The menu is two pages long and several of the items looked delicious. I ordered the shrimp po' boy. Any restaurant that can do that sandwich correctly immediately endears itself to me. Ten minutes later the waitress returned and informed me that they were out of shrimp. I wasn't devastated because plenty of other things looked good, although I was curious as to why it took her ten minutes to tell me.

I selected the hot links with fries and cole slaw (I was going to order potato salad and slaw, but she told me that the fries are much more popular than the potato salad). Elizabeth ordered the chicken fingers, and we each asked for iced tea. 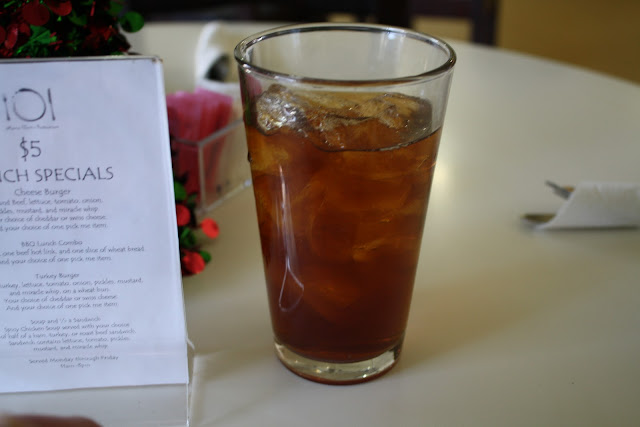 I disliked the tea - it was sugary and tasted strongly of lemon. If I'd known it wasn't going to be unsweetened, I would not have ordered it.

We sat around for half an hour without receiving any food. I was hungry and my mood was worsening by the minute. (I can be one of the most patient people you have ever met, but I can also be an insufferable ass when I am hungry.) I was worried that this place was too similar to Perdue's for me to make it a regular destination. The waitress apologized for the delay without explanation. Our food arrived five minutes later, 35 minutes after we'd ordered it. 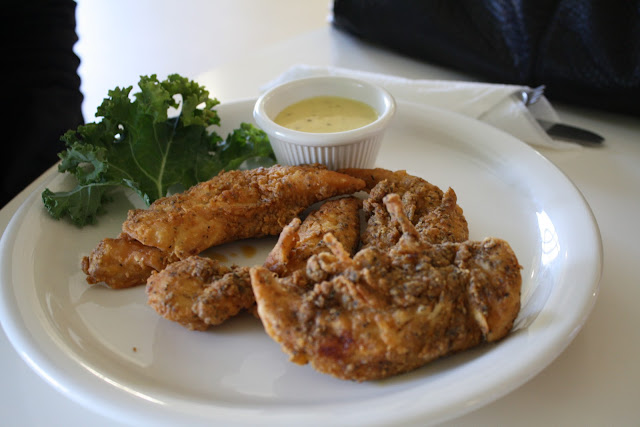 Now the first of the good news: the food was really good. The chicken was tender and juicy and nicely spiced. Sometimes you get chicken tenders so overly-breaded and fried that you can barely taste the poultry, all you taste is breading. These were great, as was the honey mustard that accompanied them. 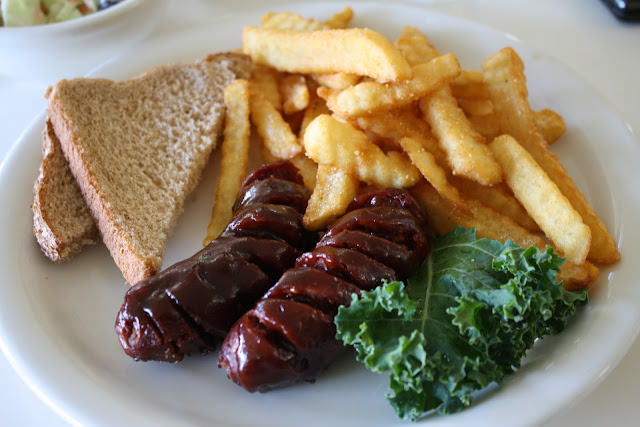 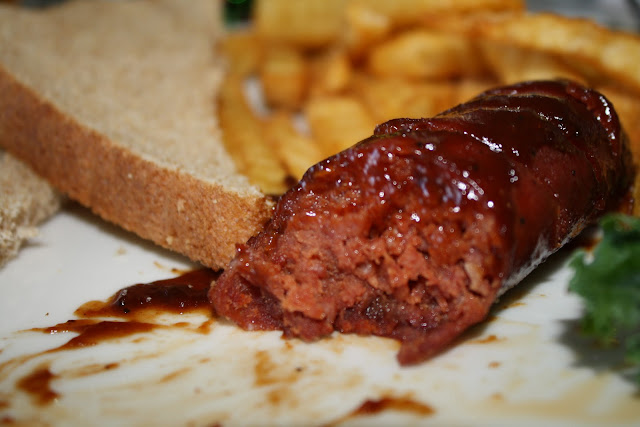 And the hot link was phenomenal. I cannot think of a better hot link I have ever had in Pasadena. Just outstanding.

Then came the second piece of good news: a woman came out from the kitchen and introduced herself to us as Mama Claire, thanked us for coming an apologized for how long the food took.

"I am supposed to have two other people here cooking with me today and they didn't show up. It's only me."

She seemed genuinely sorry that our food had taken so long and all was immediately forgiven. I have had many, many friends who have worked as servers, cooks and bartenders, and I know that sometimes it only takes the slightest thing to screw up a service. (If you were to read through the 793 posts I have written, I'm not sure how many times you would read me write about bad service, but I bet it would be less than 10.) And expecting two employees to show up who don't is certainly one of those things.

We chatted for a minute about how she learned to make this food as well as some of the dishes on the menu and she mentioned that her favorite item is the appetizer of turkey meatballs in barbecue sauce.

"That sounds excellent," I said. 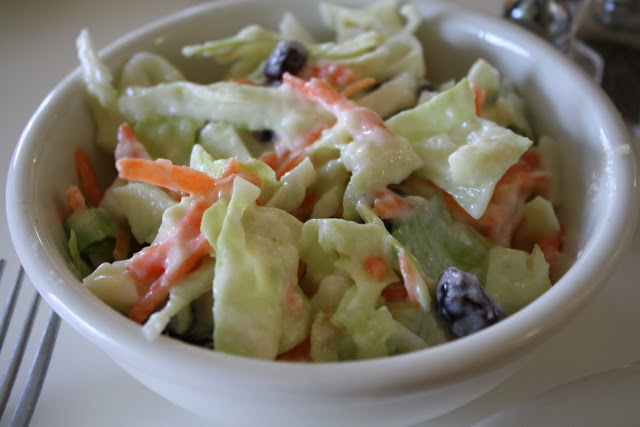 I prefer my slaw without raisins, but I've had enough slaws in the South containing raisins that I don't mind it anymore. This cabbage (and carrots) was fresh and crunchy, with just a light mayo-based dressing. It was very good. 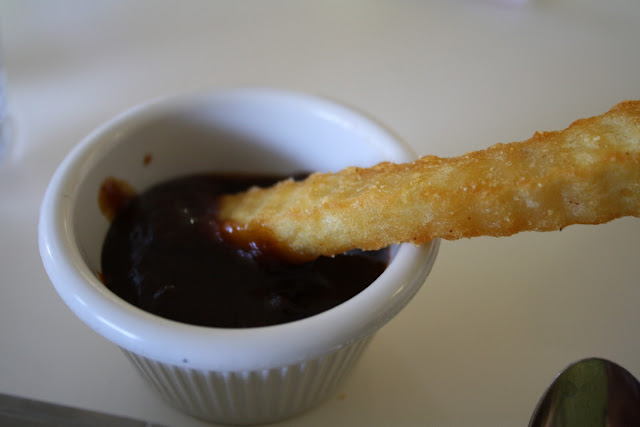 The fries were good, too: crinkle cut, fried crisp, covered with spices. And they served as a great vehicle for eating the house-made barbecue sauce. After trying the sauce on the hot links I requested some extra. And Elizabeth agreed with me; there are very few barbecue sauces that she likes but she really liked this one. 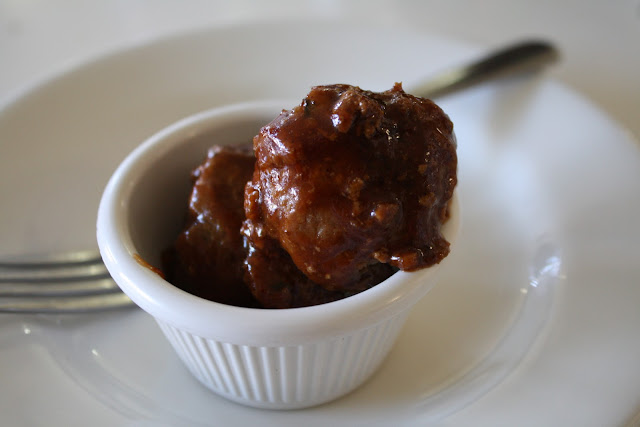 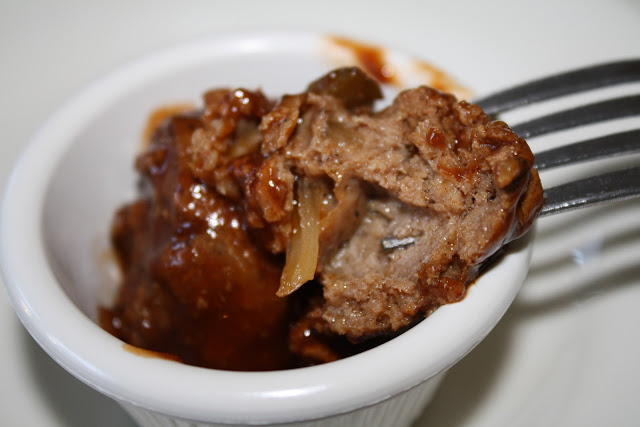 And the final piece of good news: as further apology for our long wait, Mama Claire sent us each small ramekins containing two of the aforementioned meatballs. They were simply some of the best meatballs I have ever had. It is a constant joke amongst my friends how good my balls are - partly because they are that good, if I do say so myself, but mostly because it's fun to see that ball jokes can still make us laugh in our 30s - but these meatballs are better than mine.

I will absolutely be returning to Mama Claire's. They are friendly and reasonably priced, and I can tell they care about what they are doing, something that could not be said for the previous restaurant here. I need to try the shrimp po 'boy, but I also want to try the catfish and the meatloaf. And get an entire order of those meatballs.

OH MY GOSH! This is fantastic. My friend Matt and I had been lamenting the loss of Perdue's BBQ for a number of months now. This is great news, on a number of counts. Thanks so much.

One more reason to make me homesick. I may have to stop reading this blog.