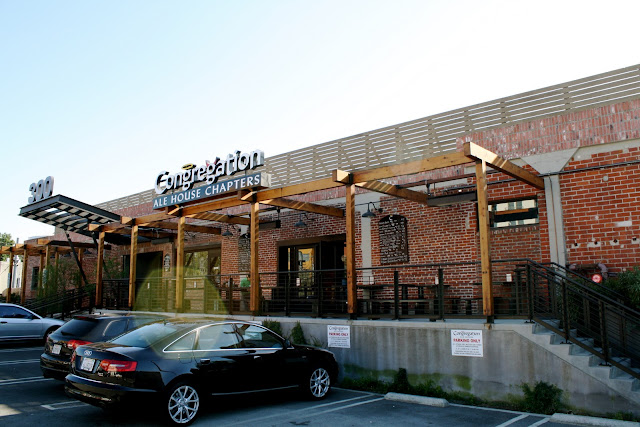 There are not many restaurants I have looked forward to opening in Pasadena as much as Congregation Ale House. If you've been reading for any amount of time, you surely know that I like beer, burgers, sandwiches, and Belgian fries. I'd seen pictures of all of those things at the Long Beach location (or "chapter," as they call it) and they all looked good.

Congregation had its grand opening on Sunday in the old Crown City Brewery space on the corner of Del Mar and Raymond. Half a decade ago I would often end my evenings at Crown City, huddled around a table with some friends splitting a few appetizers. I didn't love the place but it was just far enough away from the craziness of Colorado Blvd, the appetizers were usually good (especially the smoked chicken and bacon lavash) and the Red Stripe was cold.

The space had been vacant for more than three years, but now Congregation is open. My friend Bryce and I (and his daughter Lucy) stopped by for lunch yesterday. 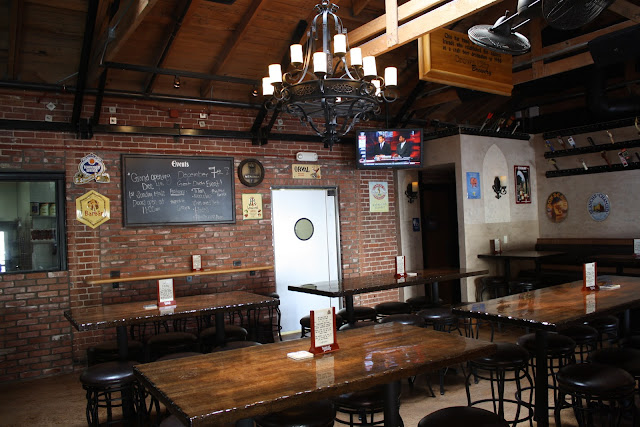 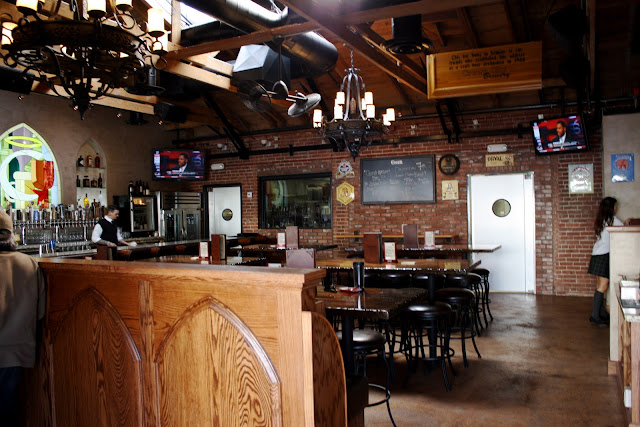 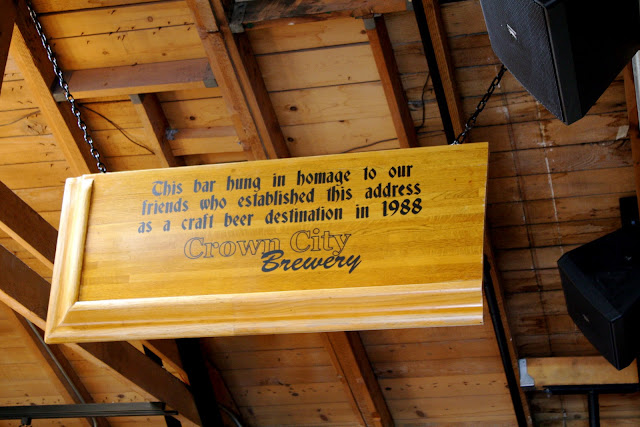 The interior only takes up about half the space that Crown City did. It's much more intimate than I expected. 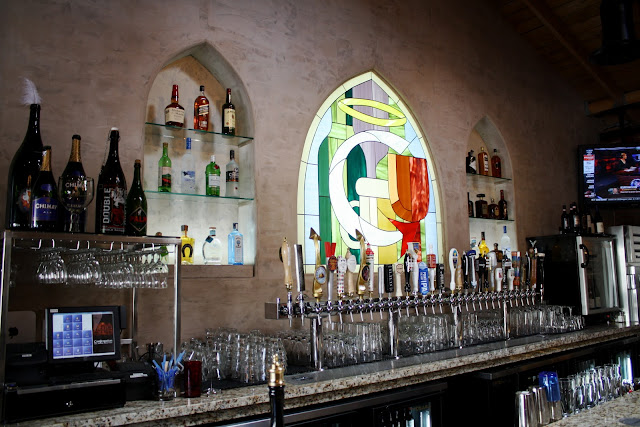 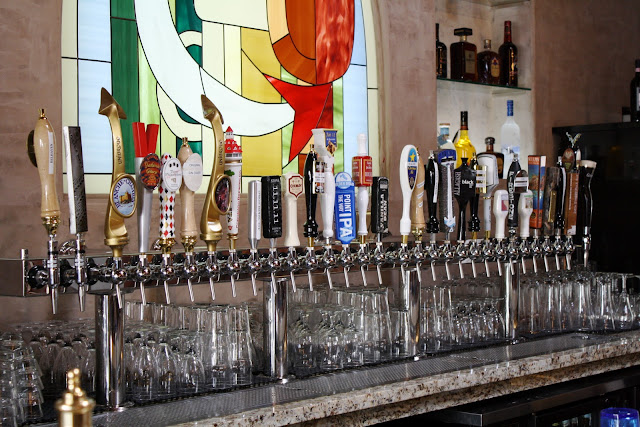 The beers are listed on a chalkboard because "they're going to change frequently." It was a nice selection, but it was 11:45 in the morning and I didn't need a beer. 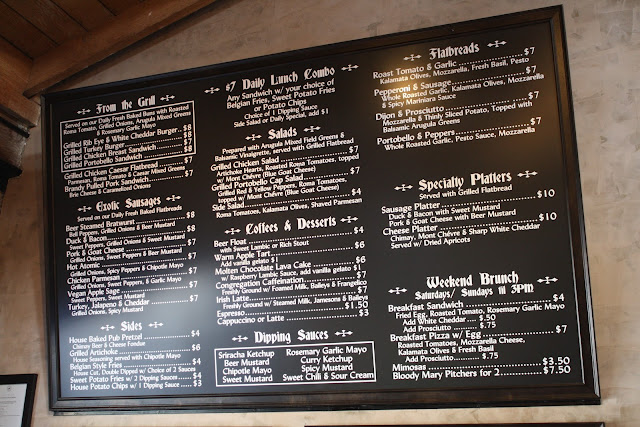 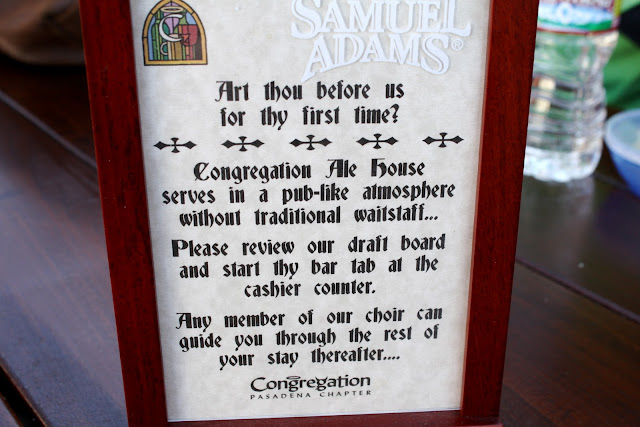 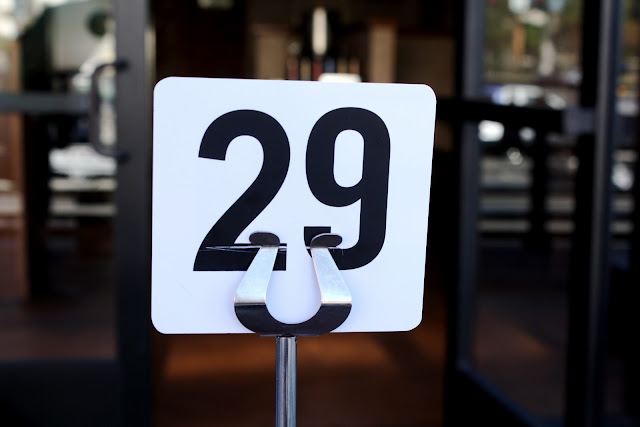 As the tabletop display says, you order and pay at the counter; they pour your beer and hand it to you right then and give you a number. A server brings the food when it's ready. If you think you might be having more than one beer, you can start a tab when you place your order. 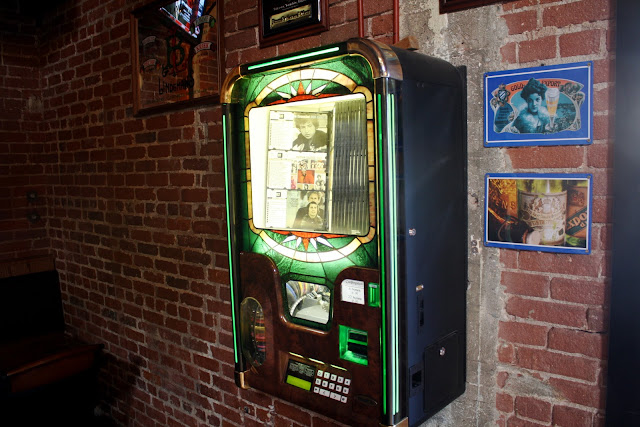 I chatted with the owner for a couple of minutes. I know him casually from another bar he managed in town a few years back. He told me the jukebox is free during lunch, there were 200 credits in it, and I "should play something because it's too quiet in here." I selected Velvet Underground, Tom Petty, Dylan, and Chrissie Hynde, then wandered out to the patio to take a seat. 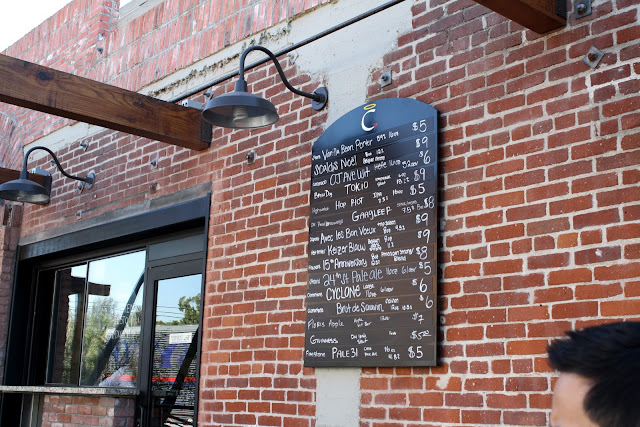 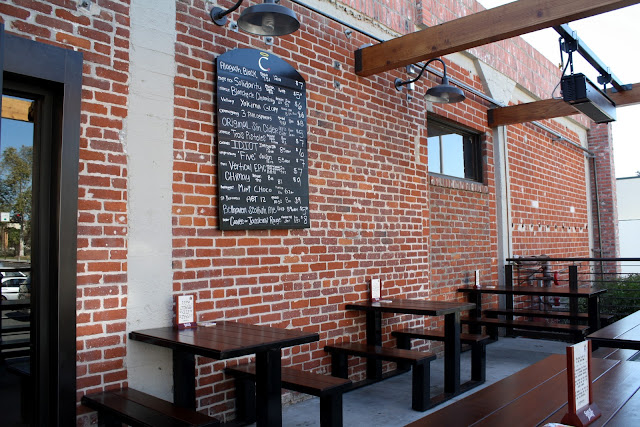 It was a cool day but sunny, and we had the patio all to ourselves. (It also worked out great because every time the Gold Line roared by, Lucy was able to exclaim "Choo choo!" with a giant smile on her face.) 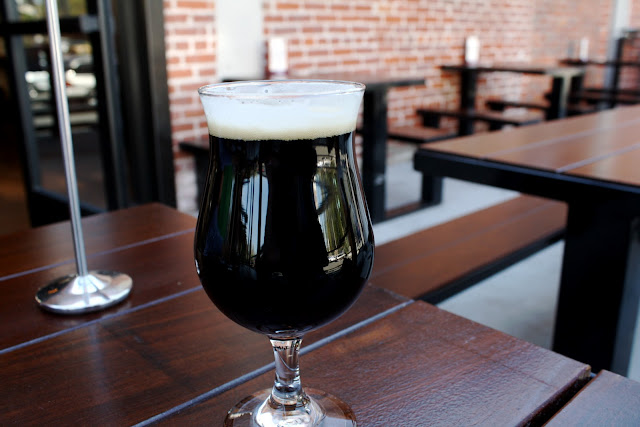 I said "I didn't need a beer." Technically this was true. But I wanted one, especially when I saw the Allagash Black on tap. It's a Belgian-style stout, tasting slightly of coffee and smoke. 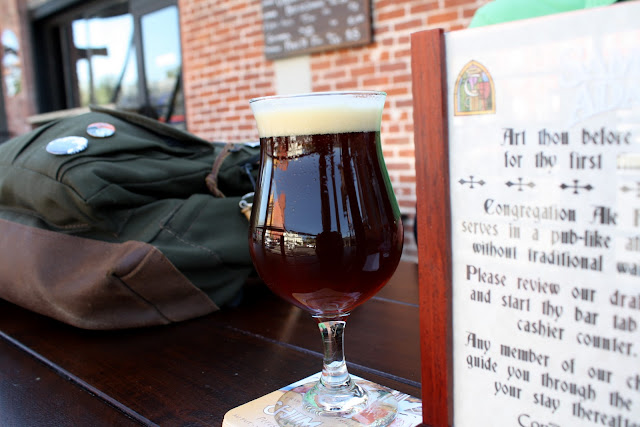 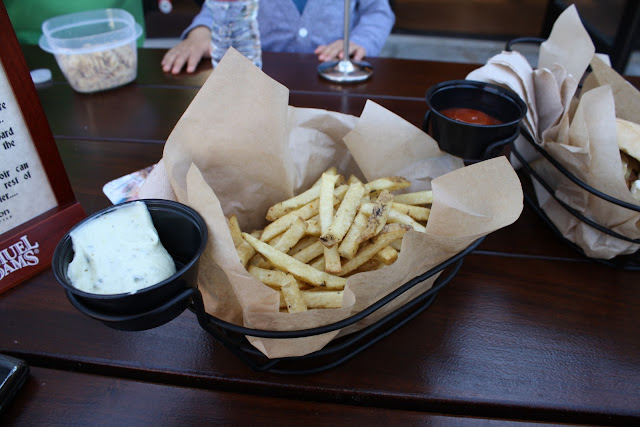 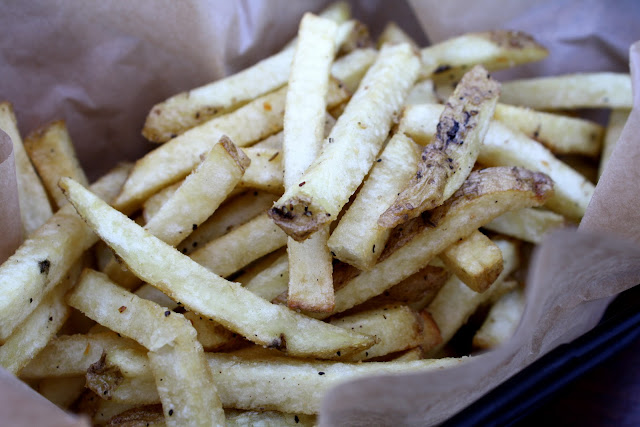 Orders of fries come with a choice of two dipping sauces. I selected rosemary-garlic mayo and curry ketchup. The latter was fine but the former was outstanding. I'm not sure I've ever had rosemary in an aioli before, but I like it. The fries themselves were fantastic, some of the best in town. 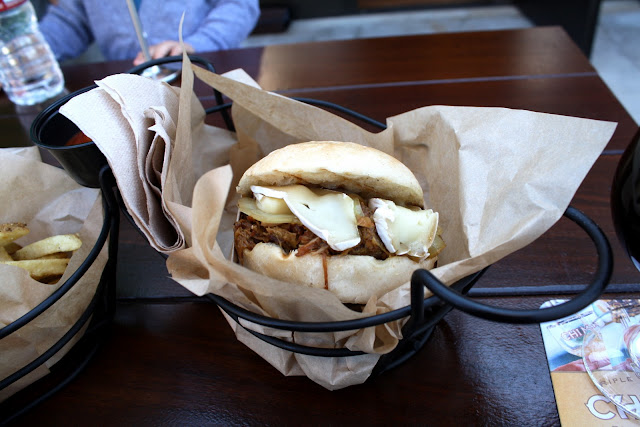 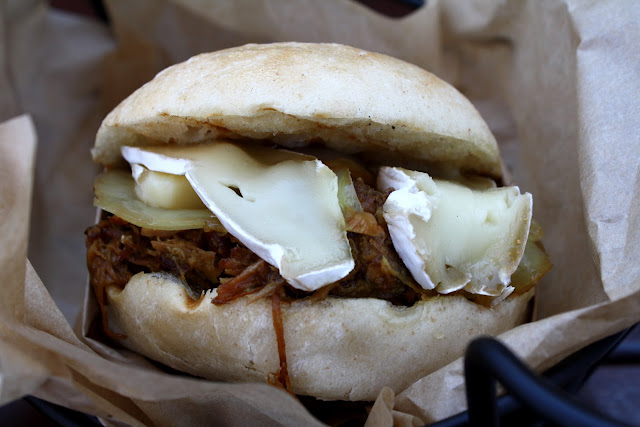 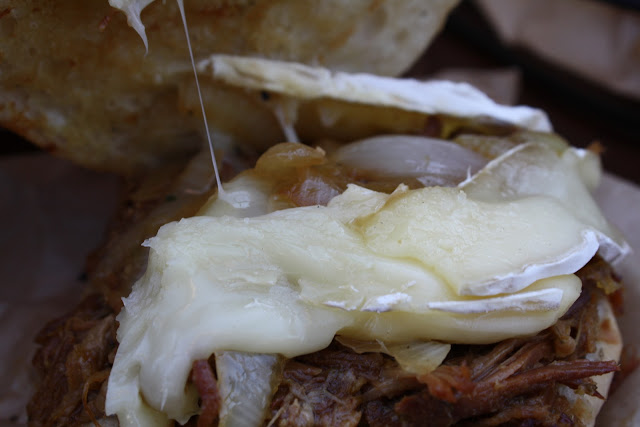 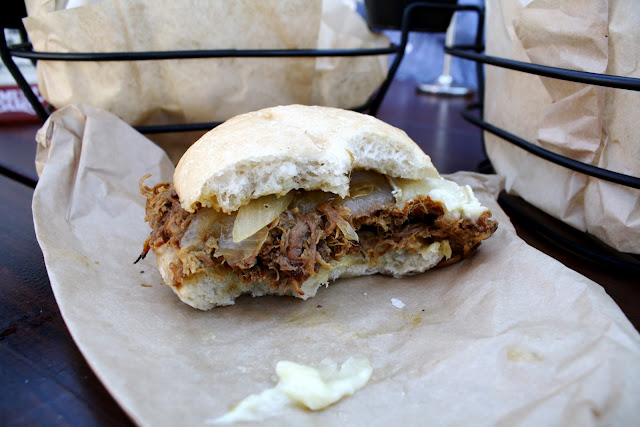 I ordered the "brandy pulled pork sandwich," which came on a roll with brie and caramelized onions. This isn't barbecue, but man was it delicious. Perhaps a little sweeter than I normally like my sandwiches, but that's a small complaint, particularly when I was washing it down with a black ale. 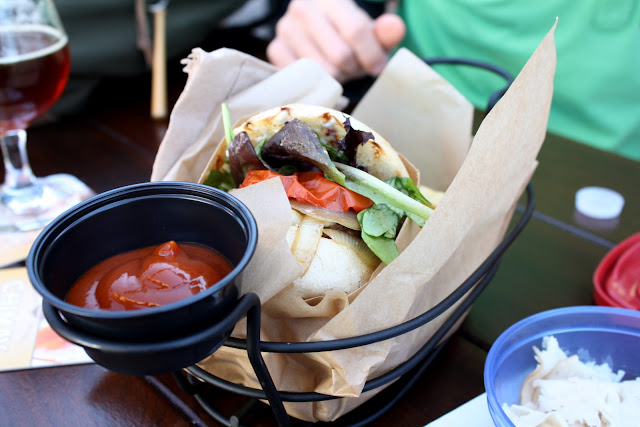 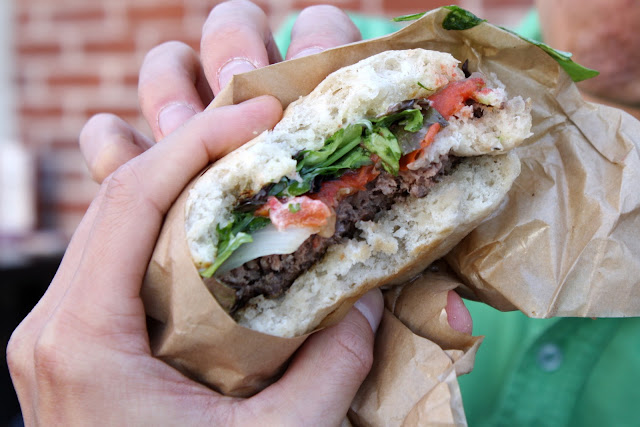 Bryce had the "rib eye and white cheddar burger," on a roll with tomato, onions, arugula and mayo. He had ordered it medium and it was pretty much well done, but he said it was still good. I certainly intend to try one at some point.

I liked Congregation Ale House as much as I expected to. (True, I am sure there will be some nights when the place is completely packed and I would hate it, but that has more to do with me than the place.) The food was very tasty and there are plenty of deals to be had, too. Happy hour is 3-7 PM Tuesday-Friday, and all day on Monday. My sandwich, fries and beer only added up to $15.70. (I can't find my receipt to figure out what deal I got, but it must have been something, because adding those things up based on their website prices it comes to $18 pre-tax.)

I will absolutely be returning. Having a beer and some Belgian fries on the patio on a warm afternoon, maybe sharing a sausage platter with some friends, looking out on the mountains, is a pleasant thought indeed.

I want, no NEED that sandwich.

I love when happy HOUR is ALL DAY.

Dang... Brie. On Pulled pork. Why haven't I thought of that? It's like happiness on top of happiness.

Poor kid has to drink bottled water while you guys get beers!

No wonder Lucky Baldwin’s was a ghost town on Sunday afternoon.
Looks super tasty.
I like the idea of gazing at the mountains from the patio.

It looks so nice inside. I would definitely like to try it. Sadly, I'll probably never make it to Happy Hour. Full price for me!

Michelle and Bekah: It was an interesting combo. I would not have thought to put brie on pork, but it worked, though as I mentioned it was pretty sweet, especially the onions.

Emily: I'll bet you do. Now if we could just get you drinking the Guinness...

Anon: Well, like most things, it's a trade off. She gets to nap every day and wear diapers, but she has to drink water while we drink beer.

Mindful: Let's do it soon.

Liz: I bet it will happen one day. And even if not, full price there is a lot more reasonable than some other places I could name.

is that bryce's forehead? lol

Yeah, damn youthful Asian skin. The guy is 4 years older than I but we've been places where he's been carded and I haven't.

Love your blog, first comment! I was there on the last day Crown City Brewery was open and it was packed to the gills with people bidding a fond farewell to a great place. My favorite BBQ Chipotle sauce of all time was served at Crown City...did you ever have it? I might stop by Congregation but the ghost of that BBQ Chipotle sauce still haunts me...

Hi Lauren. I don't actually remember if I tried that sauce. I wasn't a fan of most of their food, but sharing appetizers with friends was fun. We would always get lavash and popcorn shrimp, and I think chicken tenders and potato skins and probably something else that I'm forgetting.

I agree that the food wasn't that great at Crown City Brewery but that BBQ Chipotle Sauce still gets tender recollections from me and my friends. Being a Highland Parker (not too far from Pasadena), you should check out the food truck fest that goes on in my neighborhood every Tuesday night. I would love your blog take on the trucks...

As a whole I think food trucks are overrated. This is not to say that there aren't some good ones, just that with very few exceptions, I have not enjoyed them, or rather not found their popularity to be commensurate with their quality.

What kind of crowds does the fest get? Because I will not wait in long lines to order food from a truck. Sorry if that sounds grumpy, that just isn't something I'm willing to do.

I cannot wait to check this place out!

Mmmm this looks like my kind of place when I'm in that kind of mood. I am loving your brandy pulled pork sammie, all the way. Good job on the wallet too.

Just what Pasadena needs - another chain. But this one has a theme! I wonder if they have jousting tournaments to go with their cheesy "thou-and-thy" crap.

Justin, I think your food truck opinions are definitely justified by the media mania surrounding it and the ridiculous waits on trucks sometimes. The Highland Park truck fest has had thinner crowds lately due to the cold weather so waiting has not been a problem this month. For me, it's a great way to get a fresh batch of food options once a week in my neighborhood. The several extraordinary trucks I've had has more than justified the hype for me: Grill Em All Truck, Grilled Cheese Truck, Ludo Chicken Truck, the Cool Haus truck for yummmy ice cream sandwiches, the Waffles Liege truck, India Jones truck and more...

I've salivated over your burger posts many a time and I urge you to at least have a burger from the Grill Em All Truck at least once. They are my favorite food truck burgers...

Truck fest is every Tuesday night from 5 p.m. to 9 p.m on Ave 63 in the 99 cent store parking lot right next to Figueroa Produce.

I can do that - is there a time when it's less crowded? Like if I go at 5 are they all set up and less people there?

I'm not anti-food trucks, I just don't give their food any more credit simply for being from a truck. And I think a lot of people do.