On one of my favorite blogs the other day I spied a "Mexican Cheeseburger Dip." The thing looked hideous, but it also looked... kind of good. I decided in honor of that I would take this three-day weekend to make things for no other reason than that they sounded good. Or sort of good. Or, I guess, just funny. Here is a rundown.
The Liz Lemon 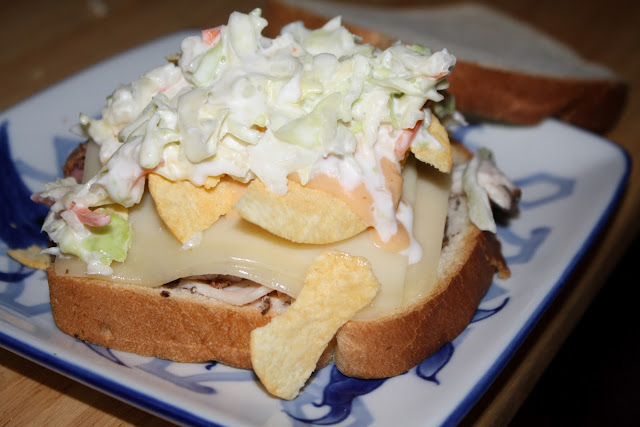 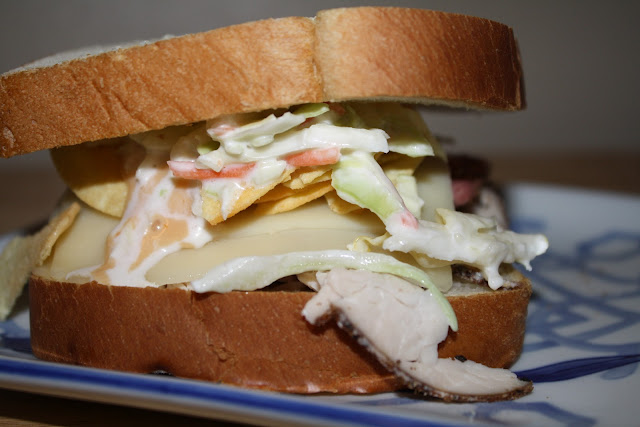 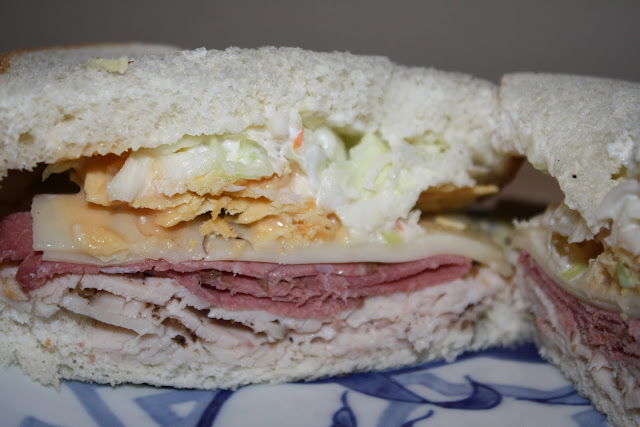 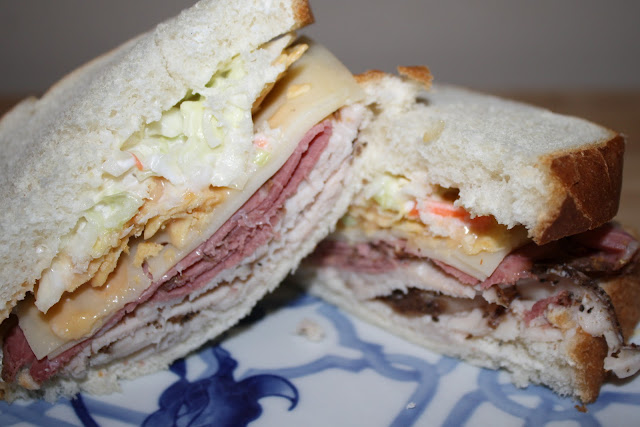 "Did anyone cheer me? Or name a sandwich after me that would maybe be turkey, pastrami, Swiss, Russian dressing, coleslaw and potato chips?"

I'm not sure if that was supposed to be a joke, but all I could think was: Wow... that sounds good.

It was.
An Overdose Of Dill Pickles 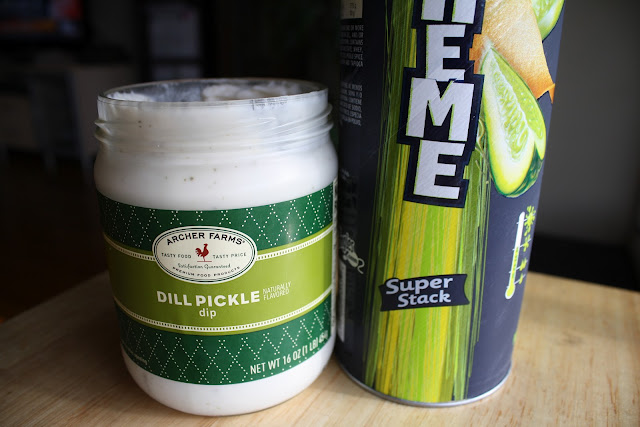 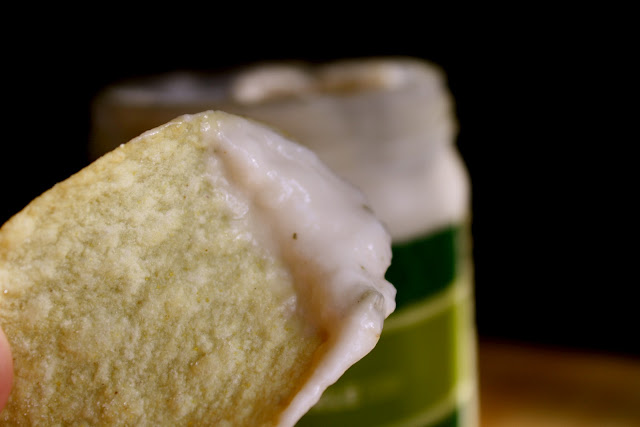 This, on the other hand, was a bit over the top. Either one is fine, but the combination was intense. 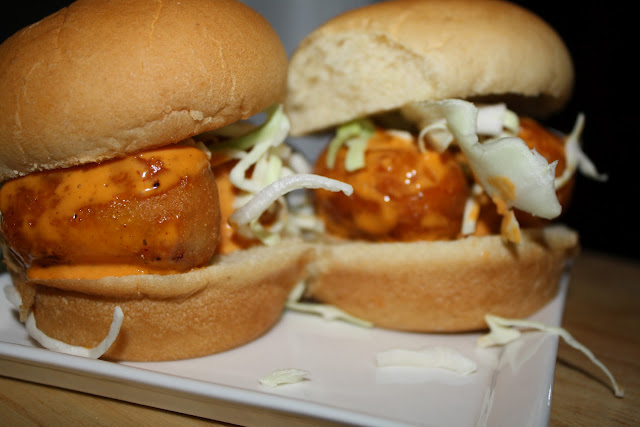 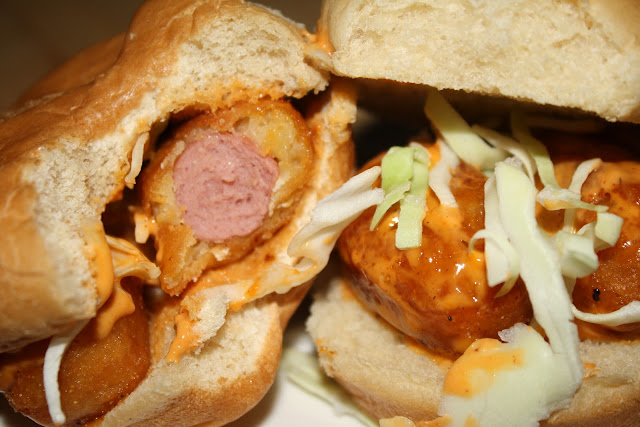 Mini corn dogs tossed in chipotle sauce with cabbage on slider buns. I'll be honest - I'm not sure where I got the idea for this. Corn dog sliders? They were fine, but I don't see myself making them again. 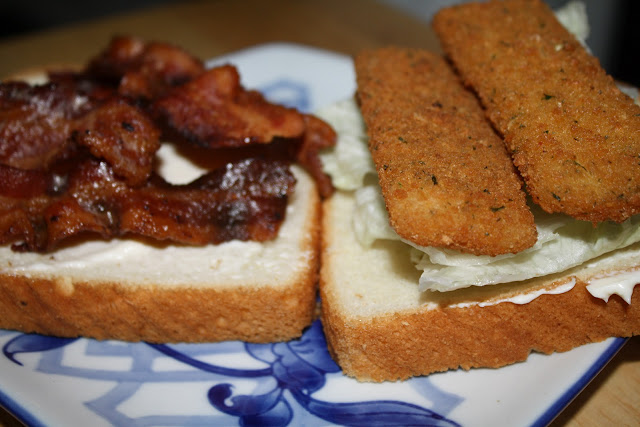 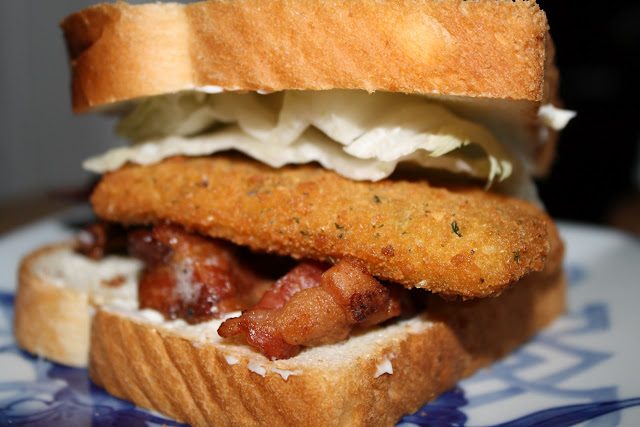 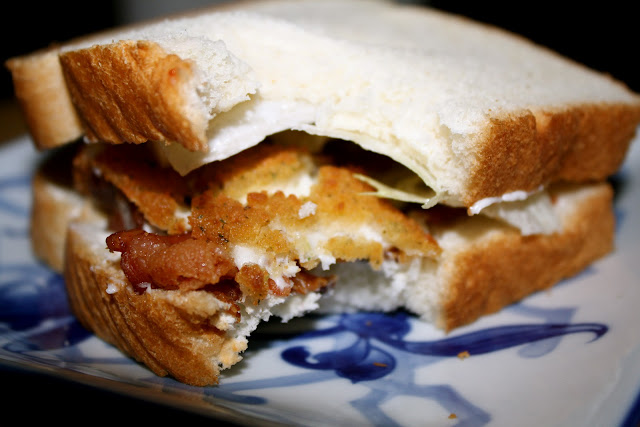 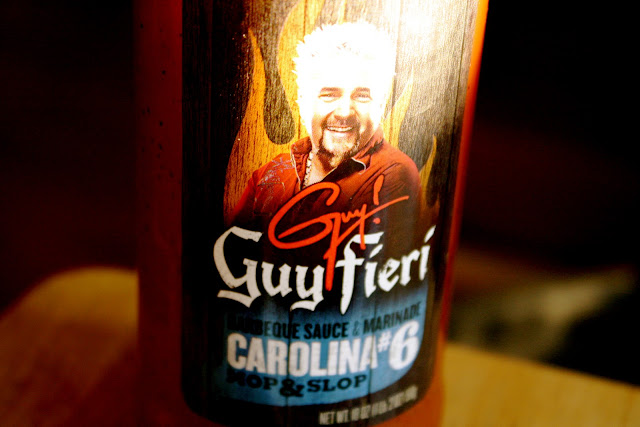 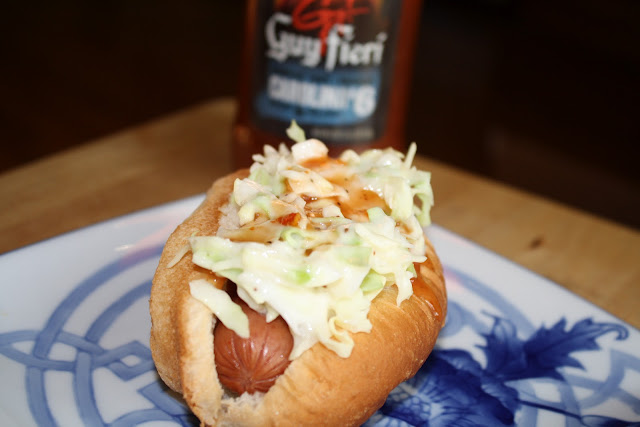 I am not what you would call a Guy Fieri fan. I don't hate the guy like, say, my brother hates Bobby Flay, but I find his whole shtick annoying to no end. Let's just leave it at that. (But I have to admit, I still watch Diners, Drive-Ins and Dives because I love the format and what the show represents. Although I can't help but think how much superior it would be in the hands of someone like Alton Brown or another host who doesn't feel the need to try and upstage the guests.)

But I have to say, I freaking love this "Carolina #6" sauce.  The main ingredients are vinegar, sugar, tomato paste and pepper. There are only a few restaurants I have eaten at outside of North Carolina that have served me a barbecue sauce this good, and I have never found it in a bottled sauce. I've used it on carnitas, chicken nuggets, as a base for cole slaw, and, on this occasion, poured over a slaw-and-mustard hot dog. 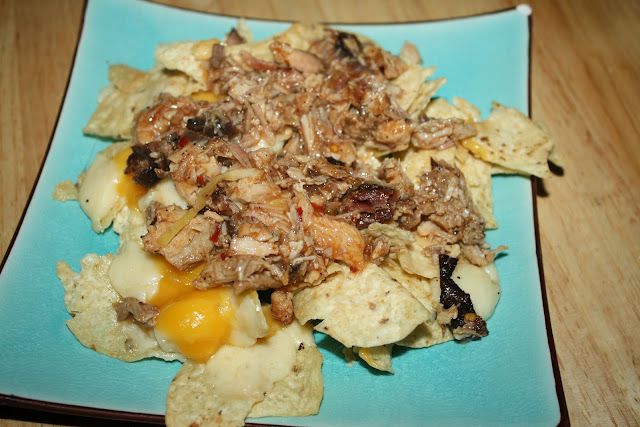 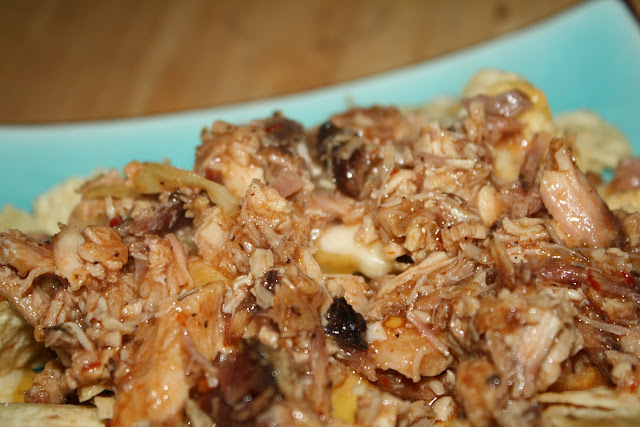 I had some leftover chopped pork from a lunch the day before, so I heated the pork with Guy's sauce and placed it over cheese and tortillas chips for my own take on pulled pork nachos, a dish my friends and I fell in love with at Silky O'Sullivan's in the French Quarter many years ago. 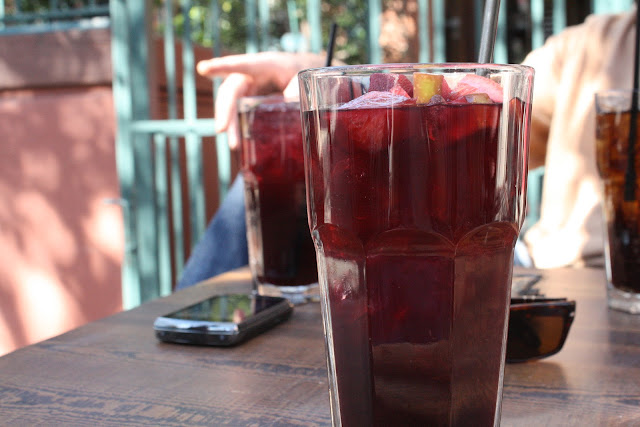 Murph: What do you want, red or white sangria?

Me: Whatever you're having.

Murph: I always get the red.

Me: Then I'll have the red.

Murph: But... I always have them put a splash of vodka in mine.

Me: I do not want a splash of vodka in mine. 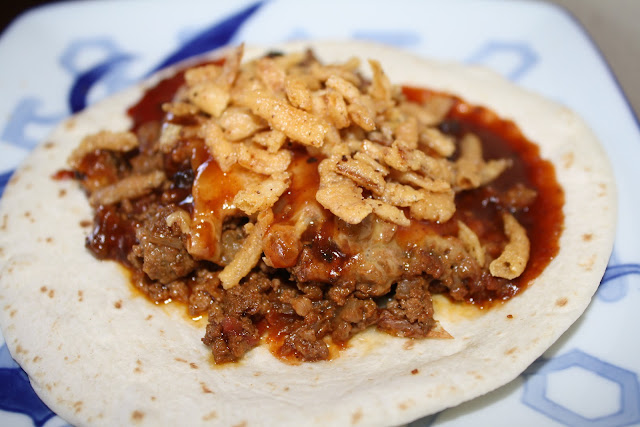 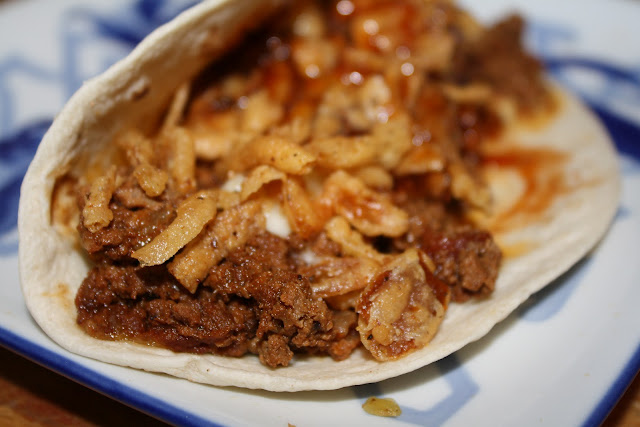 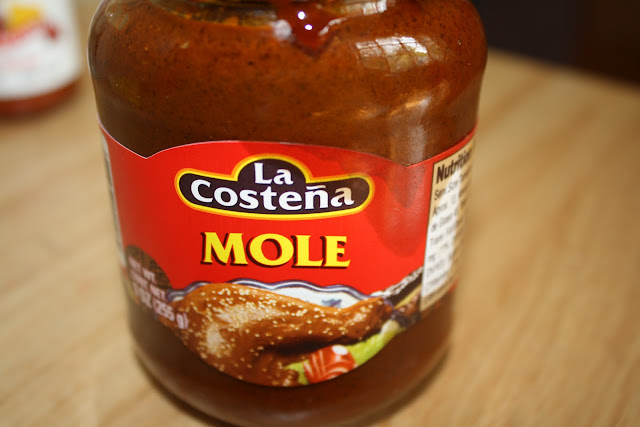 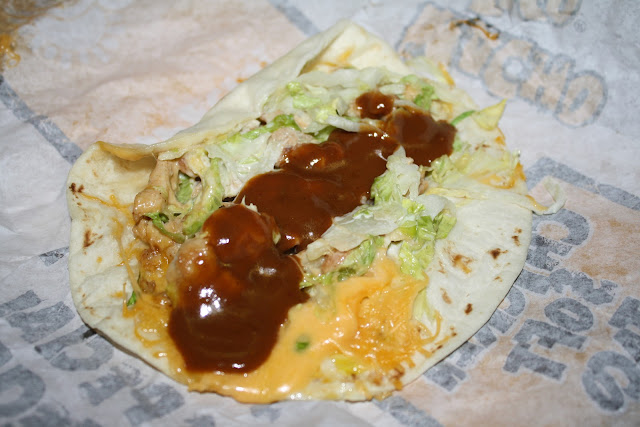 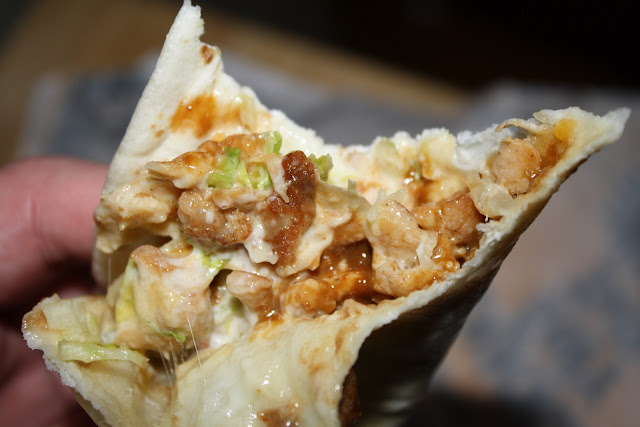 More than three years ago I wrote about Del Taco's spicy mole chicken soft taco - which itself was several months after I had eaten it. Not surprisingly, it was an awesome promotion that Del Taco had released. After years of hoping they would re-release it, I finally decided to make my own. I got a jar of mole sauce at Baja Ranch Market and mixed it with some water and hot sauce, then spooned it over the taco. It was merely average. The mole wasn't great, nowhere near as good as Del Taco's was all those years ago.

I hope you had a nice weekend.

Ahh!! LOVE that you did the Liz Lemon:) that's pretty fantastic!

BLFC is a damn genius idea!

And I love DDD, watch it often. But I still think Fieri is an idiot. After he filmed here, I got reports from the chefs that said he was terribly condescending and just straight up rude.

I thought the same thing when I heard Liz talk about "her sandwich" FAN-TASTIC that you made it. HAR.

Fritos: I don't know about "insane." Years ago, before there was a blog, I assembled pulled pork nachos at my friends Bryce and Amy's house that were the most beautiful thing I have ever seen. I made a diamond pattern out of two different kinds of sauce and everything. Now THOSE were insane.

AriannaErin: I love that you have two first names; also fantastic.

Mindful: But then it wouldn't be the Liz Lemon! I could still do it though, and call it the hippie or the "soon-to-be-dad."

Bekah: Okay, that makes me mad. I just did a Google search on the subject and found quite a few anecdotes about his rude behavior. Now I'm wishing I hadn't said anything about the sauce.

Although he looks and acts like a fucking tool, I always figured it was all an act, a shtick he puts on for Food Network. I mean, I would do some lame stuff too to get a job that cushy.

But to hear that he is actually rude to people? Does that mean he really thinks he's better than people? That it's cool to be 44 years old with bleached hair and sunglasses on the back of his neck? To be covering his fat body with clothes that would be appropriate on a 14 year-old skater? Or, my favorite, to have a tattoo that reads "Kulinary Gangsta?"

Amy: I'm glad that so many of us heard it and didn't think it was a joke, but rather that it sounded delicious.

Yep, we watched an Elite Eight game where UCLA advanced to their third consecutive Final Four.

You and your wife had asked me to provide a list for nachos, then you went to Zeke's and appeared to have purchased at least three times the amount of barbecue I needed. The nachos were double-layered, about 5 inches thick, and could have fed 35 people. I used the regular and mustard sauces to create a diamond pattern that looked quite nice.

Justin - I find it disturbing too. And again, I love the show. I love the food. I love the style. I love how they play it out. I watch it for a couple hours every Friday night.

But yeah, he's a damn tool. If you watch, the chefs (mostly) stand back from him. If you watch (not knowing) thinking they are nervous, it makes sense. But they are actually pissed at the bleached dude.... or at least that's what I heard from our chefs here. He actually made suggestions on how to improve their dishes. The damn dishes he was there to sample.

Sorry if I upset you. What totally sucks is that I know I have to find that sauce. My husband will seriously love it, based on your description.

Not turkey AND pastrami, for heaven's sake! Turkey pastrami! It's a thing. Also, white bread? No, no, no -- she doesn't specify, but it of course must be rye.

I made this sandwich myself the other day, and I can also attest that Ruffles work better -- the crunch holds up to the moisture in the dressing and slaw.