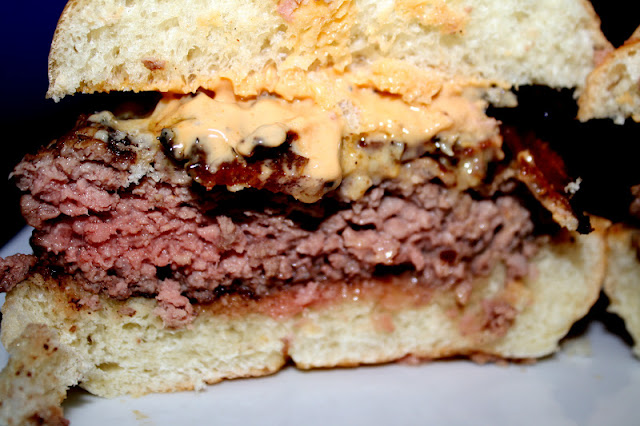 I do not pretend there is anything unique about this. It's been more than half a decade since the whole let's-put-bacon-on-anything trend started. Bacon & chocolate candy bars were the first thing I remember seeing, and it only got more ridiculous from there. Bacon ice cream. Bacon floss. Bacon-flavored condoms. A national fast-food chain came out with a "bacon milkshake" that, in what I thought both summed up the craze and would serve as its epitaph, contained no bacon.

So I admit there is nothing clever about what I'm doing here. It just sounded like fun. It all started this way: 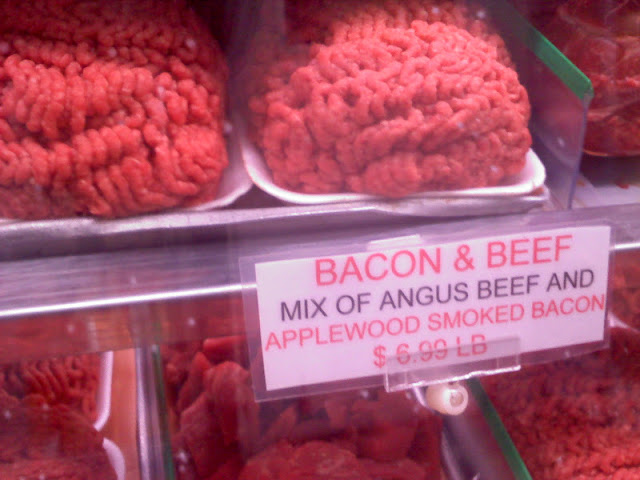 I was at Paisanos, trying to decided what to do for dinner, when I saw they have a blend of Angus beef and applewood-smoked bacon. A bacon-cheeseburger sounds good for dinner, I thought. And I'll get some extra bacon to go along with it. I snapped a picture with my cell phone. 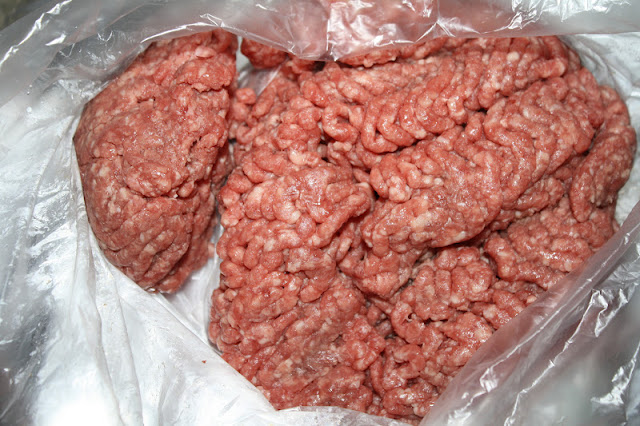 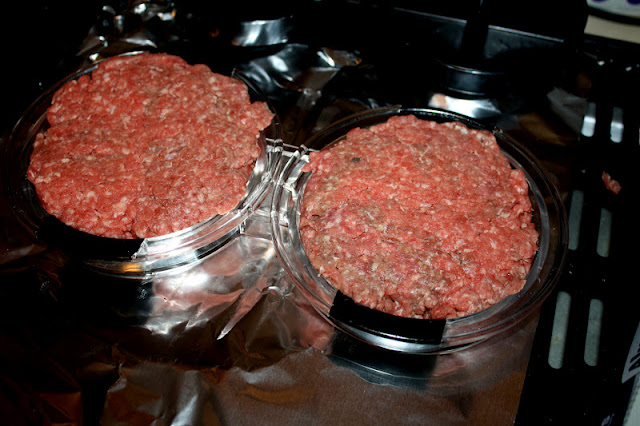 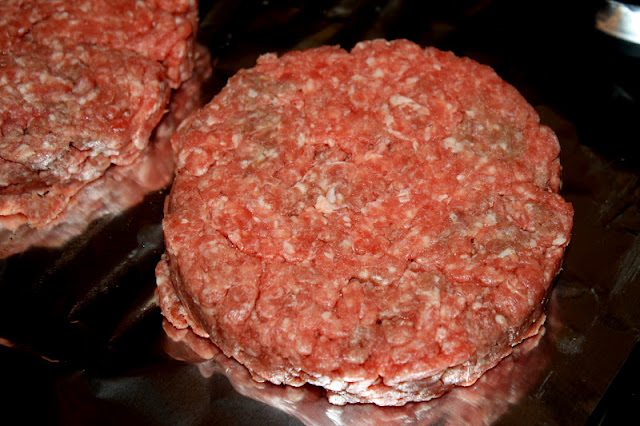 Last Christmas I received this burger press in my stocking and I put it to use here: you can turn out nice-sized burger patties, about a half-pound each. 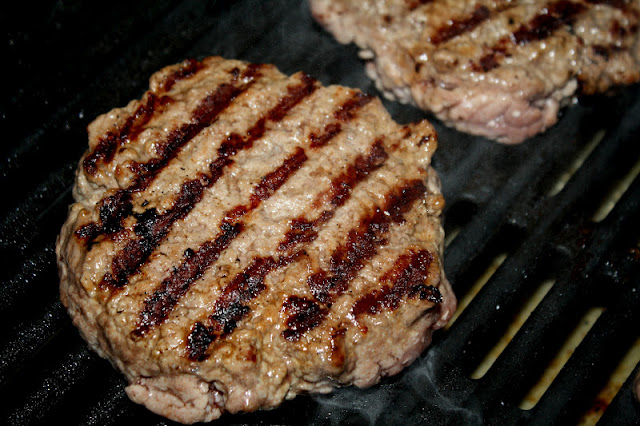 Some neighbors of mine, in a building across the courtyard, have an outdoor deck, and on the weekends you can smell the charcoal grill firing up. I can't say I don't like it, because it smells like summer... but it makes me a little sad. I miss my old grill tremendously. I've only cooked on an outdoor grill twice in four months. I'd almost rather give up baseball. (Almost.)

But my indoor grill works quite nicely for what it is, and I grilled these burgers in the kitchen. 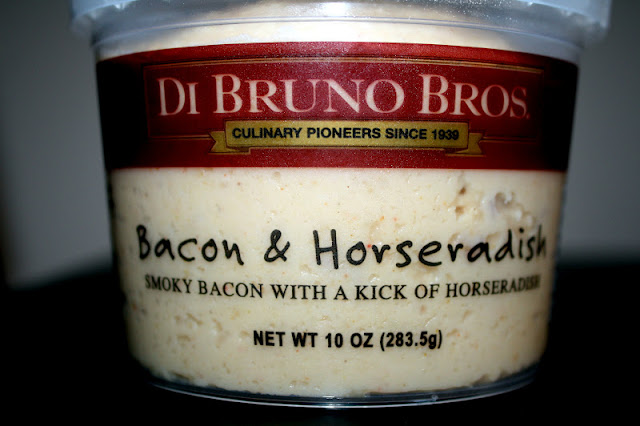 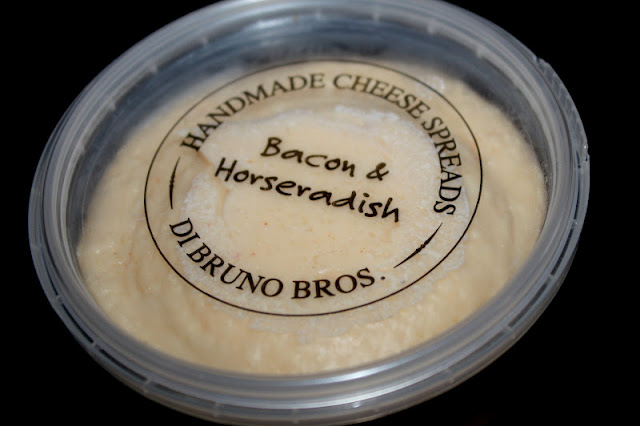 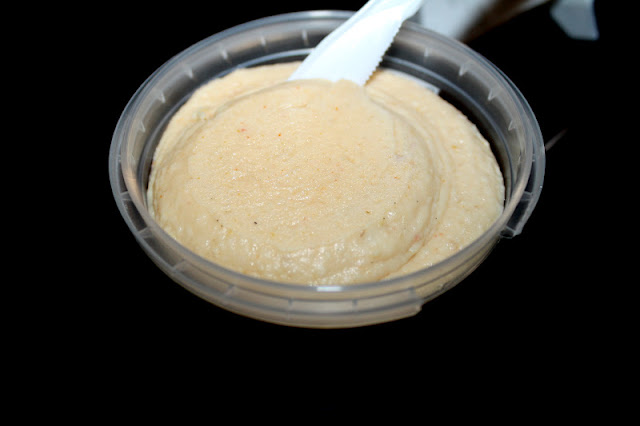 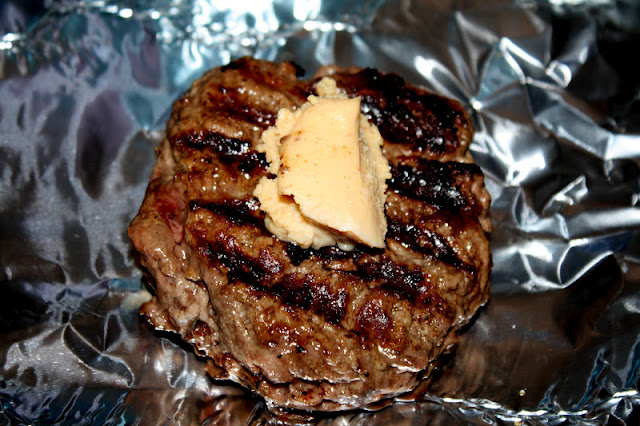 To complement the beef/bacon mix, I picked up a bacon-horseradish cheese. Once my burger came off the grill I put a glop of the cheese on top and wrapped the burger in foil for a few minutes. 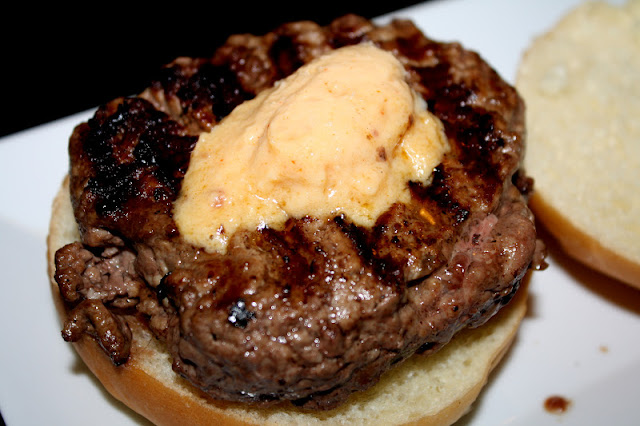 So that the burger could rest and the cheese could melt down a little. I placed the patty on a brioche bun. 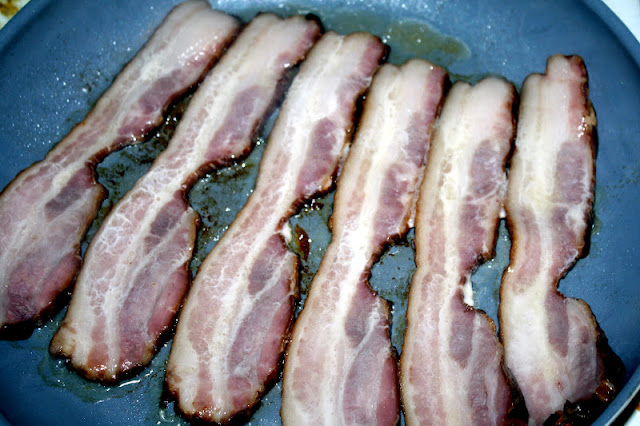 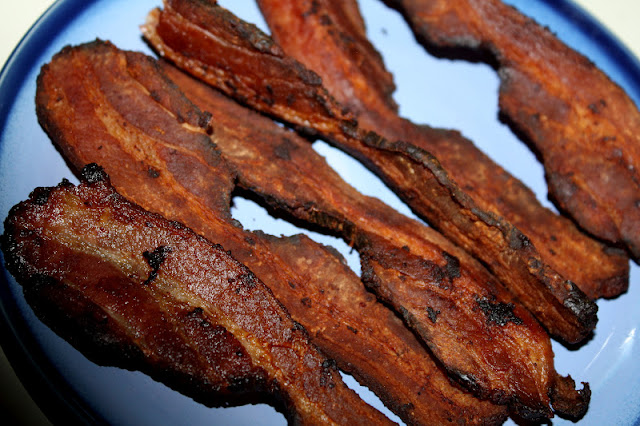 I slowly cooked a few slices of Paisanos thick, applewood-smoked bacon in a pan, to a crispy, dark brown. 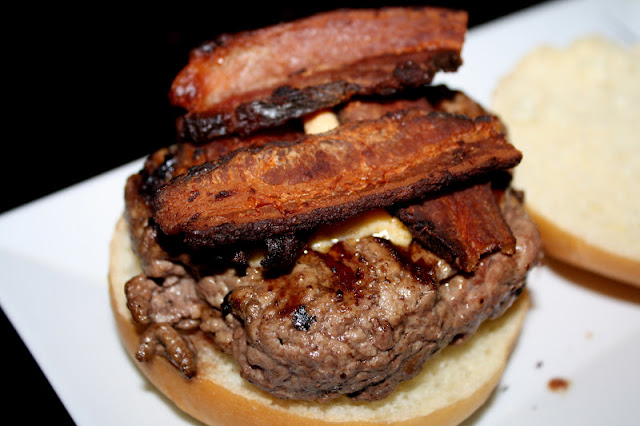 Two slices of bacon went onto my burger. 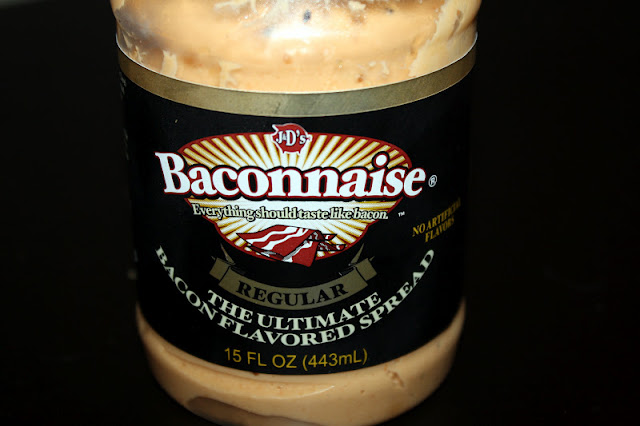 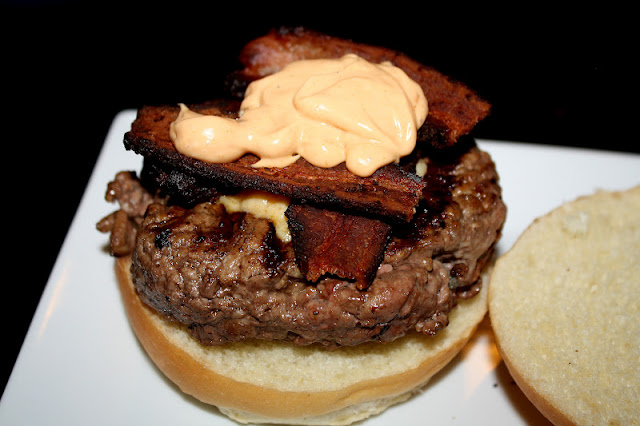 And so a scoop of the Baconnaise went on to the burger. 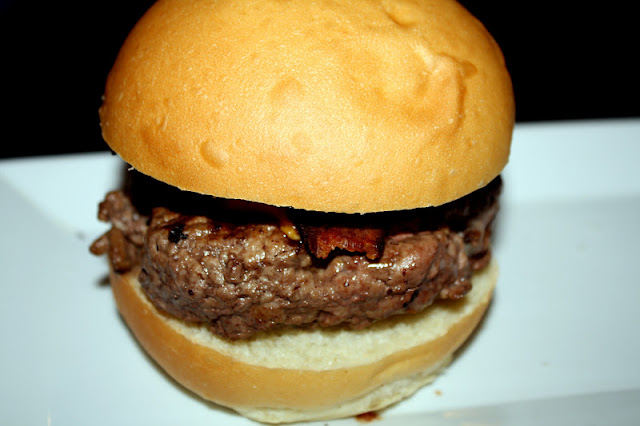 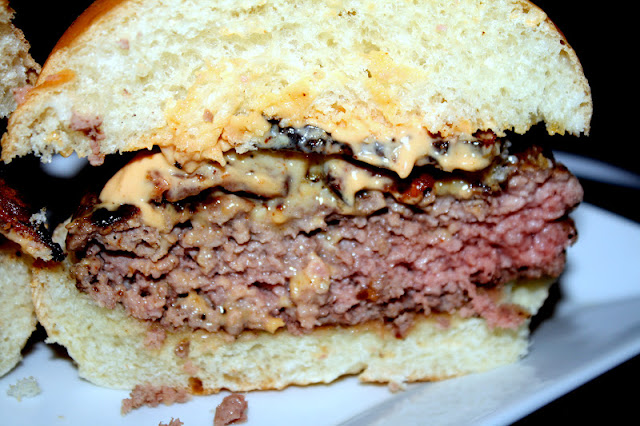 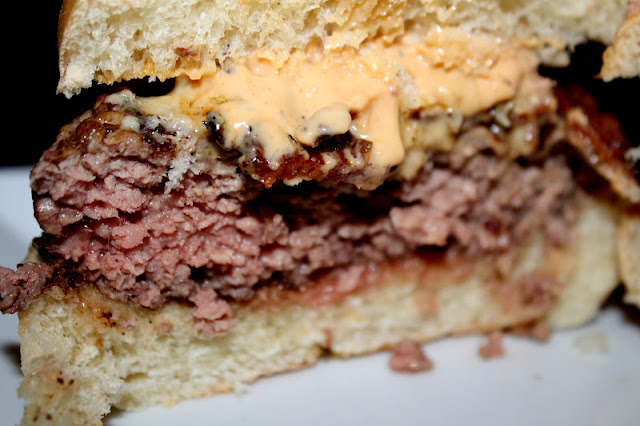 I cooked the burger a little longer than I usually do, so it wasn't the glorious dark pink in the center. I figured with pork already mixed in with the beef, it would have plenty of fat to add flavor, not to mention that medium-rare pork isn't as appetizing as medium-rare beef. But I still left some pink to it. "I don't mind a reasonable amount of trouble."

It was a wonderful burger. I had thought there was a chance - a good chance, actually - that this whole ordeal would be going overboard. But the blend of the bacon into the beef was really quite subtle. Elizabeth's dad didn't even realize there was bacon in the patty until I mentioned it to him. He also, by the way, gave me the thumbs-up sign three times while eating. I've never received more than one from him during a meal. (Except when he gives me two in quick succession, indicating that I need to turn up the volume during Jeopardy. But that doesn't really count.)

Would I make it the exact same way again? No. The Baconnaise was too much. I can see the appeal of adding it to a BLT, or perhaps dipping onion rings into the sauce, but there was no need for it here. The patty, bacon slices, and especially the bacon-horseradish cheese all played off each other quite well. The mayo asserted itself instead of playing well with the others. If I were to do this again (and I doubt I will - the brisket/short rib burger patties are better) the baconnaise would not be welcome.

I sent a photo of the burger to some good friends, asking if it was too much. One of them responded "Holy heart attack, hombre."

But my favorite response was this: "Last night I dreamed that my bed was made out of bacon, so no, I don't think so."

Have a great weekend.

Anon: In concept, yes. In quality, no.

You cook bacon EXACTLY the way I think it should be cooked all of the time. I really dislike limp bacon...

haha, I loved the part about Elizabeth's dad.

and I think you've officially beat out hodads, and slaters.

I haven't tried baconnaise yet, but it seems like the condiment to add when you can't get enough of real thing.

Ritchie: There really isn't anything worse than chewy bacon - where you can't tell what is the meat and what is the fat. It makes me sick just writing those words.

Rodzilla: The Baconnaise is intensely bacon-flavored. So I appreciate them making a product does what it promises... but it was too much here. But that's my fault, not theirs.

You can never have too much bacon. Seriously. Never.