After taking a couple of weeks "vacationing" back at home in Florida, Elizabeth's dad returned to Brooklyn for the weekend to finalize clearing out/fixing up his Uncle George's apartment. And he wanted to hit up his favorite restaurants during the three days he was here. These aren't what Rick thinks are the best restaurants, just the ones he enjoyed going to the most during his almost six months here. And, as he put it, "Even the mediocre restaurants in Brooklyn would be considered the 'better' restaurants down where we live [east of Orlando]."

Because we were letting him stay with us - we have a spare bed and, just as important for him, a TV on which he could watch Yankees games - he wouldn't let us pay for anything.


The things we had: 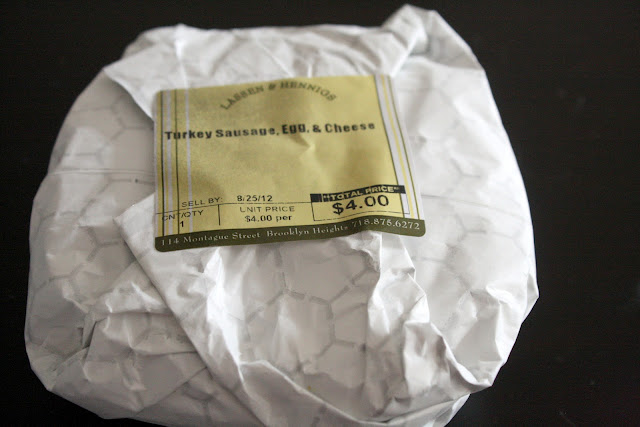 Rick was going to get bagels for us, from a place right across the street, but then Elizabeth asked me if I would make eggs to go on the bagels. When I said sure, Rick said he would just go to Lassen & Hennigs and get us breakfast sandwiches. Despite having eaten dozens of things from there, I'd never had any of the breakfast items. 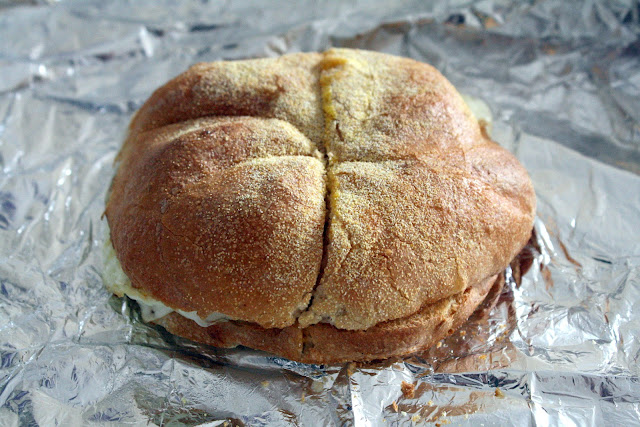 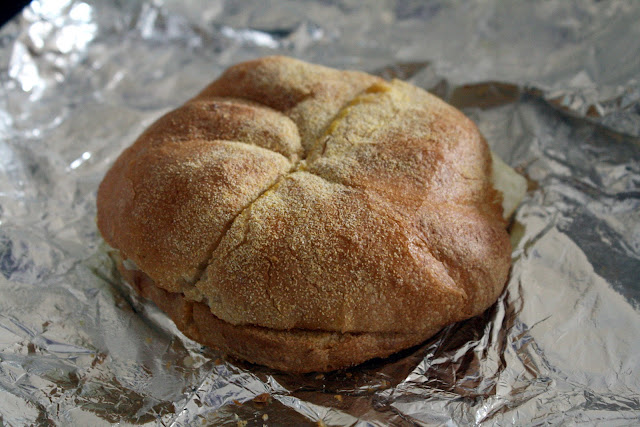 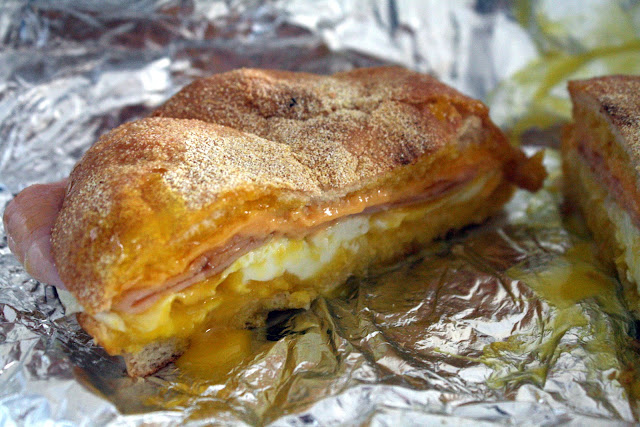 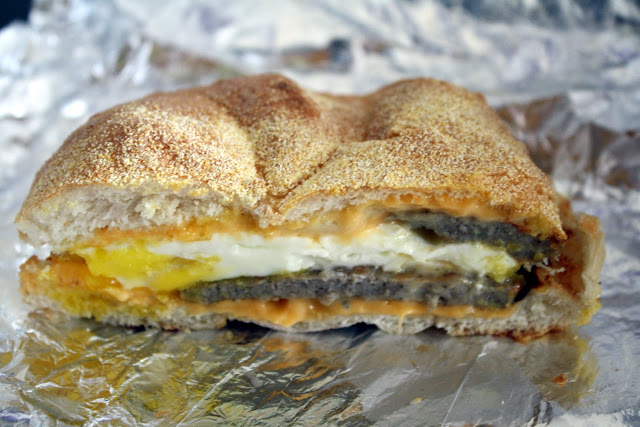 I had a sandwich with sausage, egg and cheese; Elizabeth opted for ham, egg and cheese. The sandwich was fantastic. I really like making my own breakfast sandwiches... but damn, now that I know how good these are, it will be hard not to just shuffle across the street. 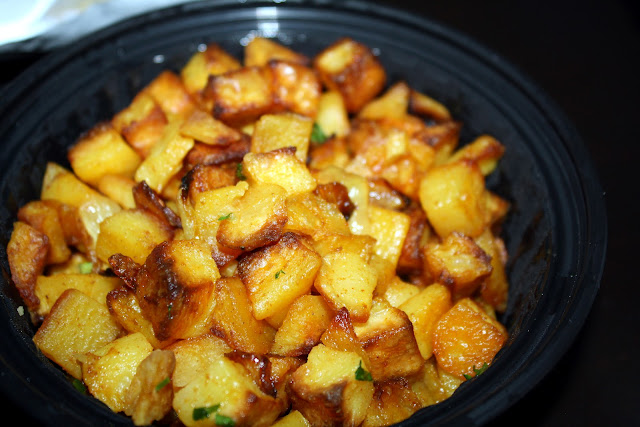 The home fries, on the other hand, were not good. It's hard to criticize them too harshly: they were piled into a closed plastic container, which isn't good for any food, and they turned into a non-crispy, flavorless mush. I didn't really care, though, the sandwich was the main attraction. 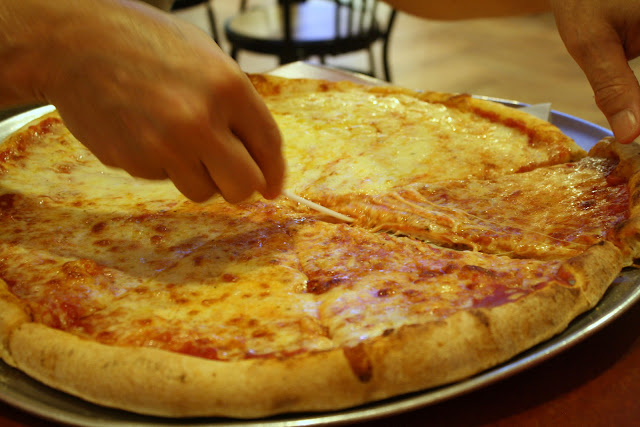 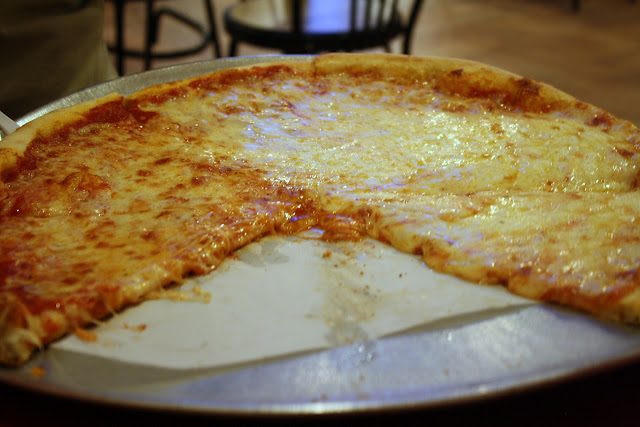 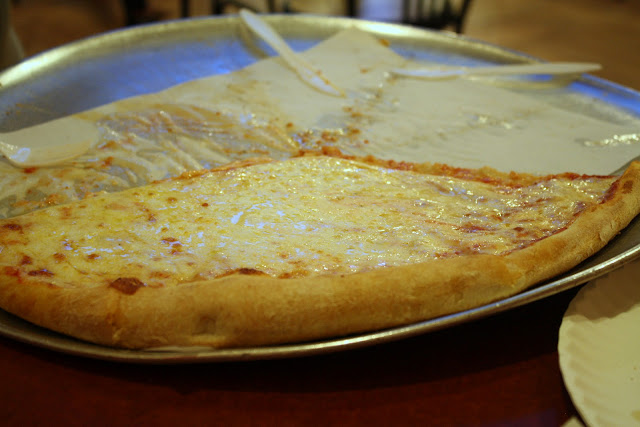 Of course Rick wanted My Little Pizzeria one last time and of course he wanted extra cheese. But both Elizabeth and I feel like the extra layering of cheese detracts from the pizza. Sometimes less is more. So we ordered it with extra cheese on only half. This worked out perfectly and we were all happy. I am embarrassed to say that doing this had never occurred to me earlier. 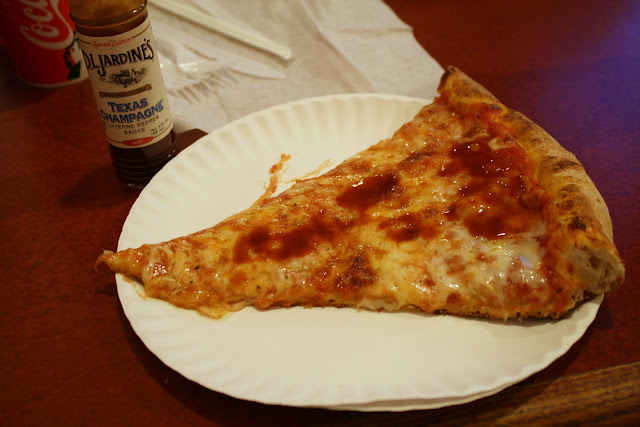 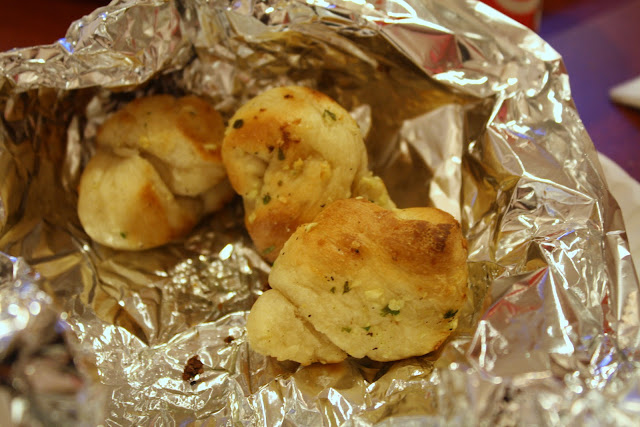 New York pizza slicked with Texas Champagne and garlic knots hot out of the oven. It doesn't suck. 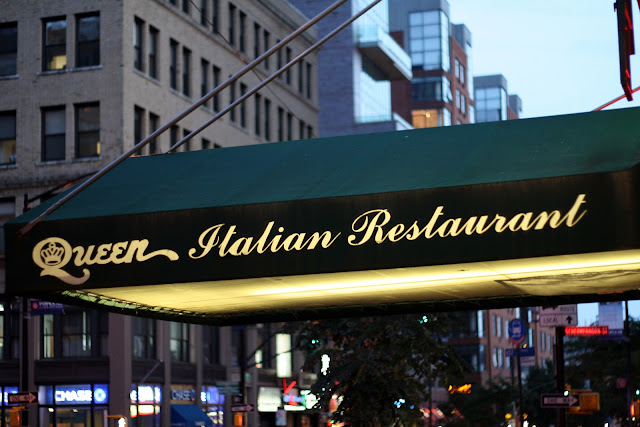 Rick's friend Maryann came by to visit him one evening, and she wanted to eat at Queen, where we'd gone in June to celebrate Uncle George just after he passed away. 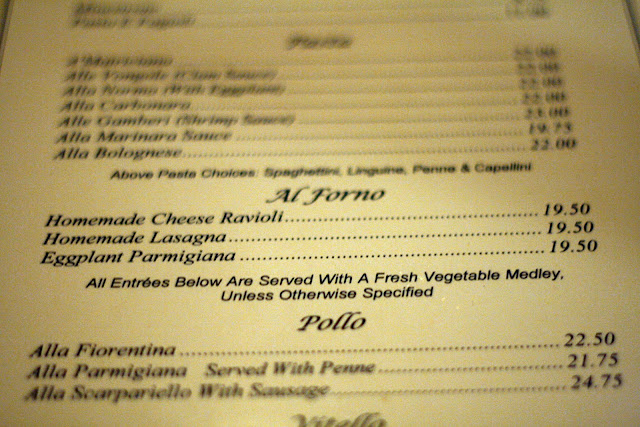 We arrived too late for the prixe fixe menu like we'd had in June - they stop serving it at 6:30 - so we chose items off of the regular menu. 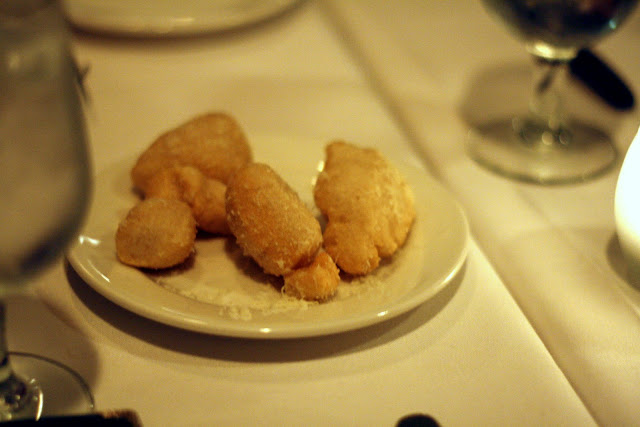 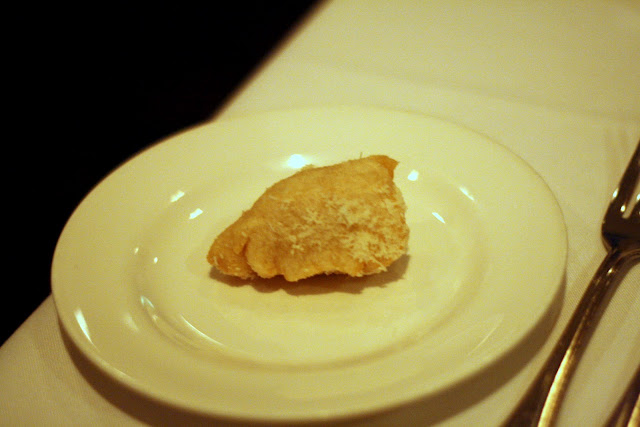 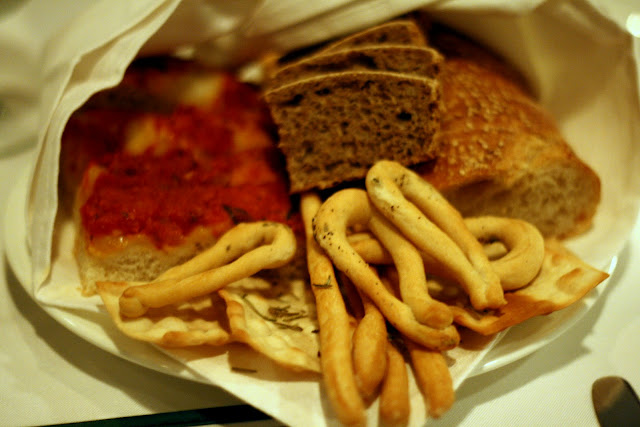 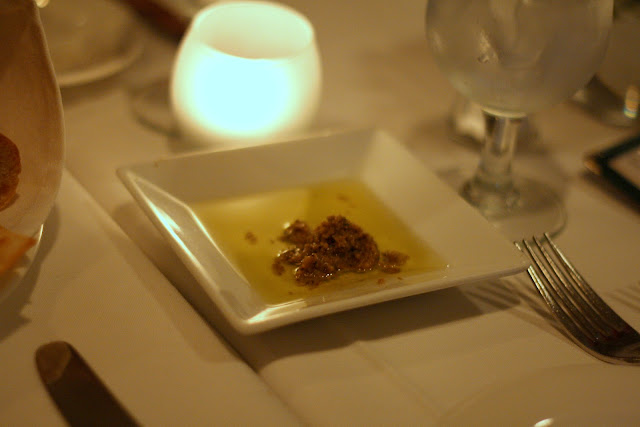 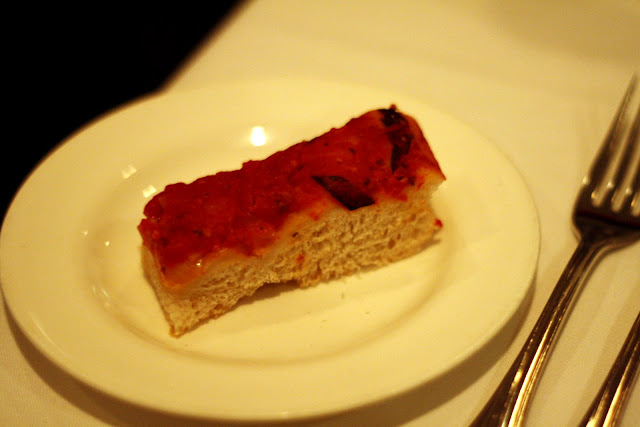 But we still got to start with fried dough and plenty of bread. 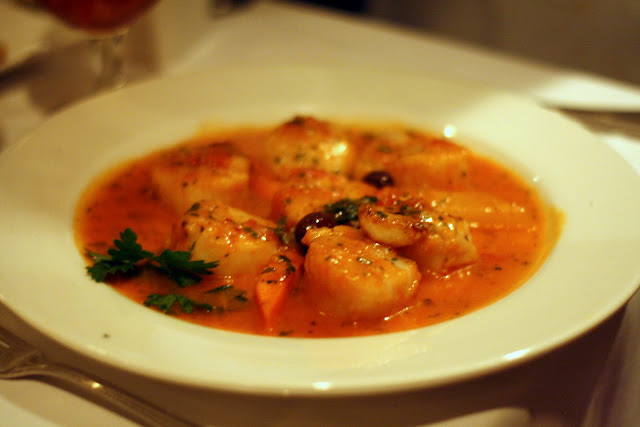 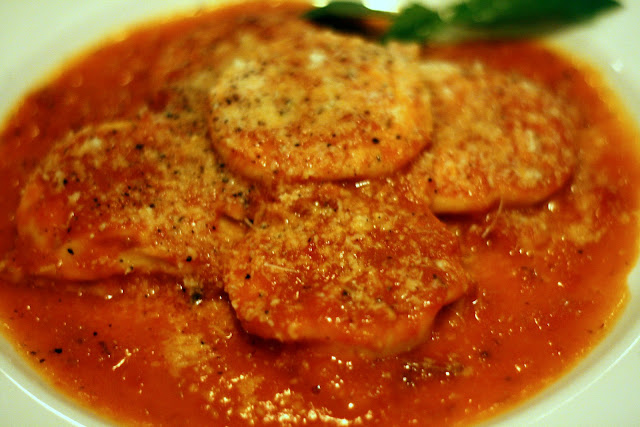 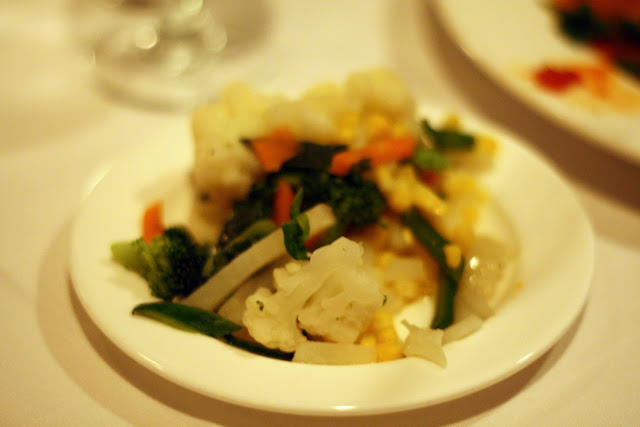 Elizabeth had the scallops and I had the homemade cheese ravioli, and both were just fantastic. 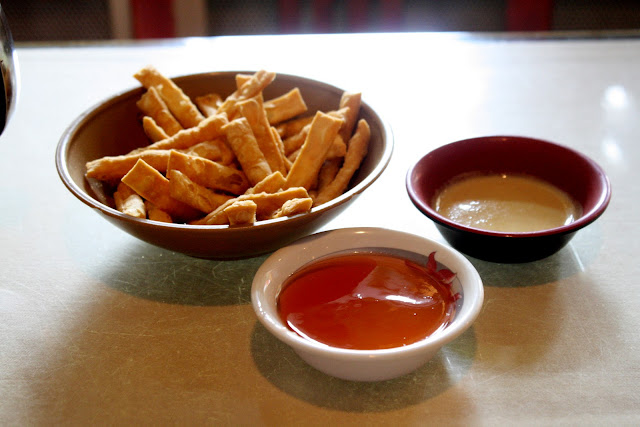 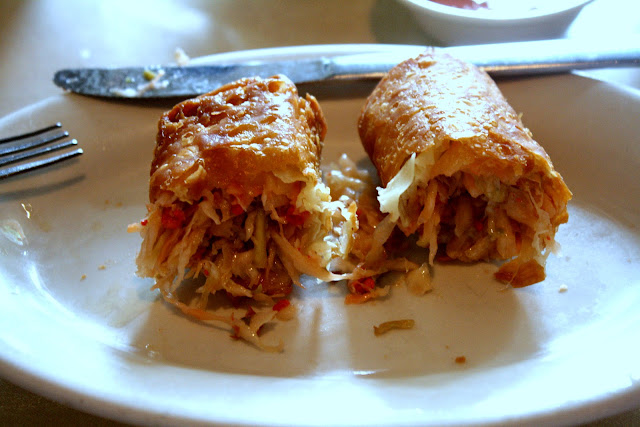 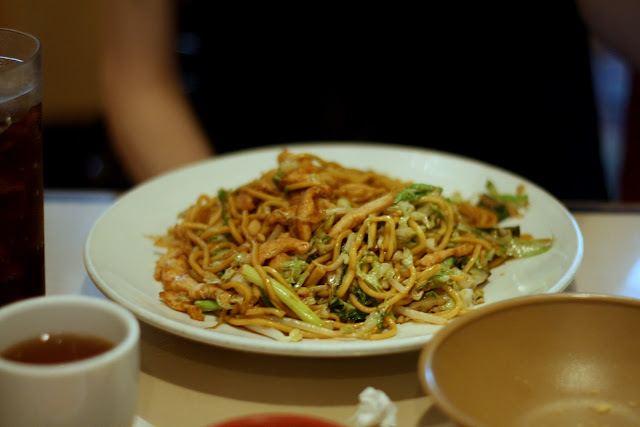 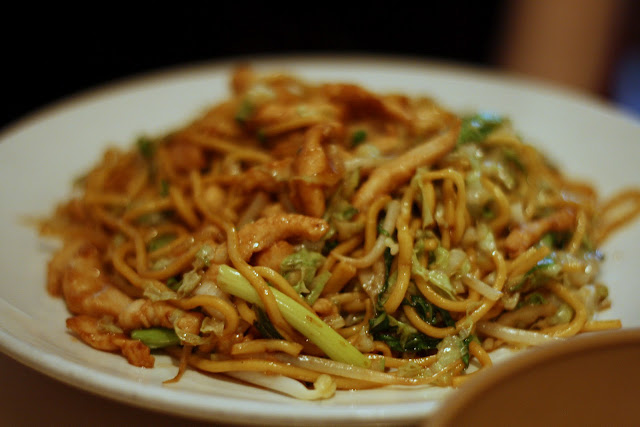 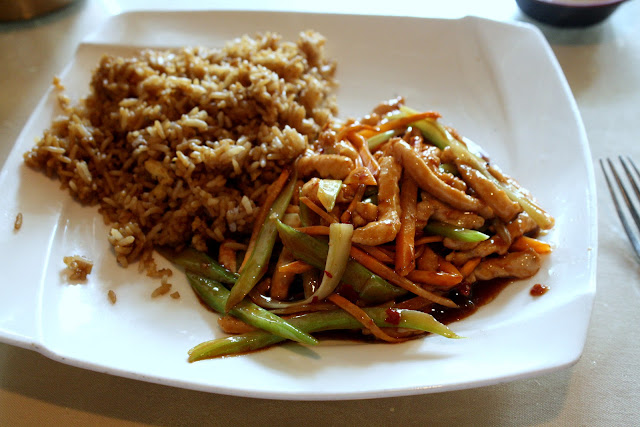 Lunch specials at Fortune House sounded good to us, so we got egg rolls, spicy Szechuan chicken, and lo mein. This wasn't exactly up to Queen's standards, but we all enjoyed the food, and the meal for the three of us checked in at less than twenty bucks. You can't really beat that.

Rick wanted to go to a nice restaurant, somewhere he had eaten once but Elizabeth and I had not. So that's what we did for dinner last night, and it was damn good. It deserves its own post.
Posted by JustinM at 9:30 AM

I'm so silly. I scrolled quickly past the Queen photographs because I was hoping that this visit was again positive and was anxious to read your verdict. Once I read, "fantastic" I went back up to actually view the photographs.

That's not silly. Whatever makes you happy. The food was every bit as good as the previous visit. I love homemade ravioli and this was the best I have had in years.

My pictures of Rick and Maryann's food didn't turn out well or I would have them up here, too.

Queen must be amazing, for you to order a pasta dish. I'm kinda sitting here gobsmacked.

Good point. In fact, the last time I remember ordering pasta at a restaurant, you were with me. I wonder if you can remember what it was. (Hint: it was in 2007.)

Everything we had at Queen that evening was fantastic. And those breakfast sandwiches were so delicious.

Totally agree with you on extra cheese -- I don't think it's ever enhanced a pie in my experience (no offense Rick!) There have been a couple times on the road where I've ordered a 'cheese pizza' and gotten extra cheese; it's that regional thing where 'plain' means just cheese, but 'cheese' means extra cheese.

I grabbed a menu and pointed out the description of the item I ordered. She said "Oh... most people just call that the barbecue sandwich. I didn't realize you actually wanted the breast of turkey sandwich."

January '08? Darn...pre-blog days. Was hoping to cheat. Was La Fornaretta still open then? That's probably not right anyway since you always got the Mt Etna.

Fornaretta closed in the spring of '07. But you are correct, I never strayed from the Mt. Etna. I tried other people's pasta and found it great, but I never once visited the place without getting that glorious pizza.

This place was (and still is) in Pasadena, though not in OT.

I'm going to guess Gale's, but chances are I'm wrong. Chances are, if I was dining with you, there was much wine consumed and that is going to be my excuse for not remembering.

A good guess but, like Fornaretta, it was always pizza for me there - prosciutto and arugula.

It was the time we went with Tim to Celestino for lunch, and yes, there was much wine consumed. I had the ravioli stuffed with spinach and ricotta in a tomato-basil sauce, which remains the best pasta I have ever had in a restaurant. (Admittedly that's less then 20 pastas, but still.)

Your memory for meals is amazing - I honestly can't remember what I ate last week at any meal.

Well, it also doesn't hurt that I have photos of 99% of my meals over the last six years.