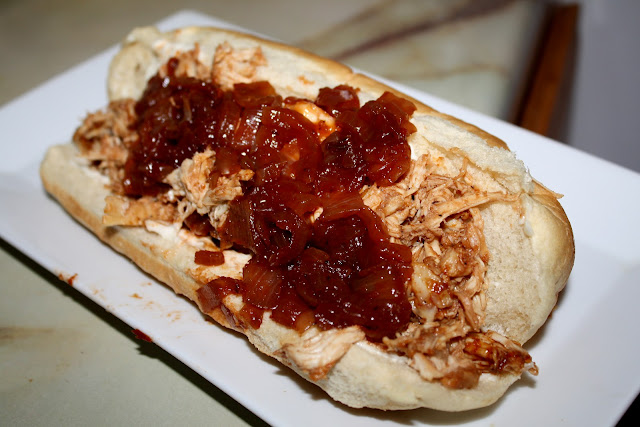 I was at the store one day and there was a package of "hero rolls," which I bought. I loved them. I had never seen them before, it was the only package there, and more than a week later I have not seen them again. I asked the store manager and it was clear he had no idea what I was talking about. Brigadoon rolls, I guess.

Anyway, I only had two of the rolls left from that package, so I decided to make a chicken sandwich. The slow-cooker sounded like the way to go. 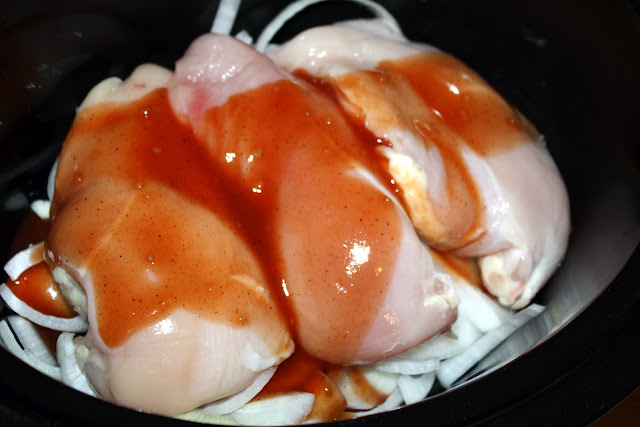 As usual, I sliced up an onion and placed it in the bottom, layered the chicken breasts on top, poured a little bit of water around the edges, and then added some barbecue sauce to the top. 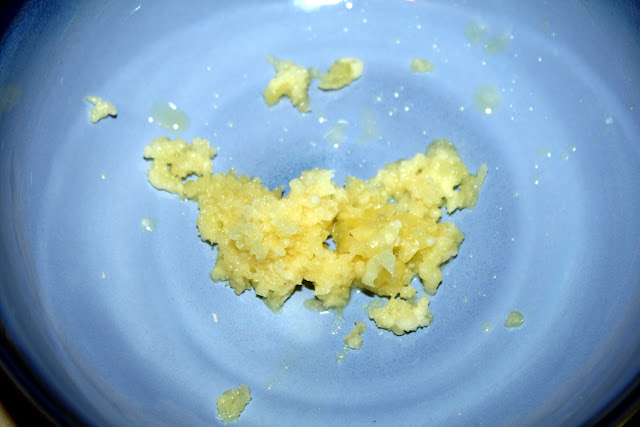 I was trying to think of a sauce to make for the sandwich, and then I remembered a recipe I'd seen many years ago on the Food Network, back in those days when you could actually learn new things by watching it. I don't know if you've ever made aioli from scratch; it's fantastic if you do it correctly but it can be a real bitch to make, and it's easy to ruin. But on some show, I do not remember which, I saw a shortcut: soaking crushed garlic in vinegar for a while and then stirring it into mayo.

So I crushed a few cloves of garlic - you really only need to crush one, maybe two, but I usually go overboard when it comes to garlic. And as I was going for the rice vinegar in the cupboard, I had a ridiculous idea: use the pickle vinegar from the Hop-Pickles. (If you've been reading this for long, you are aware that ridiculous ideas often encourage me, rather than discourage.) 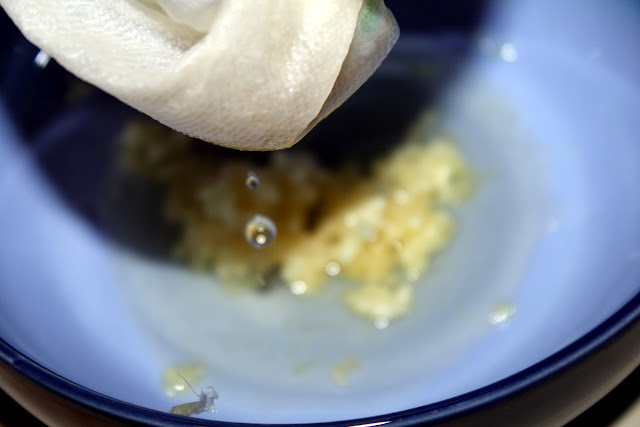 There were a few other things in the vinegar, so I strained it with a paper towel. 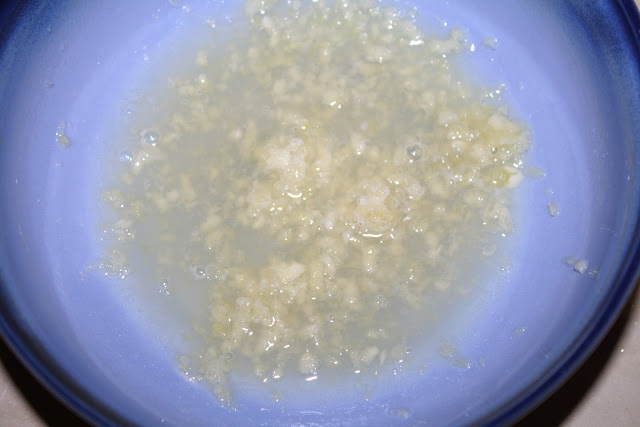 You definitely want to let the garlic steep, and if you use as much as I do, you want to leave it alone for at least an hour or two. (Unless you want the aioli tasting of raw garlic... and if you do, hey, that's cool, too.) 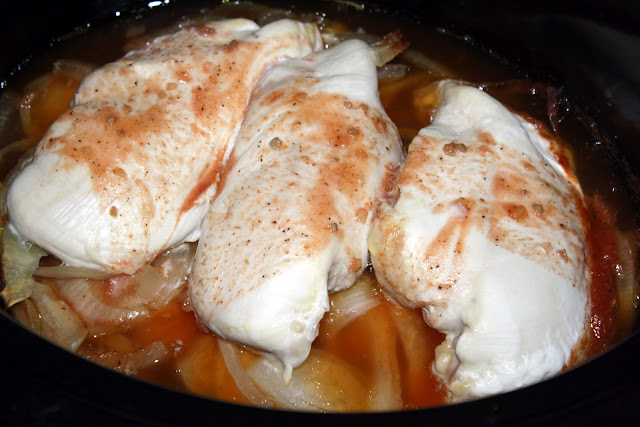 I peeked at the chicken breasts after three or four hours. They were well on their way. 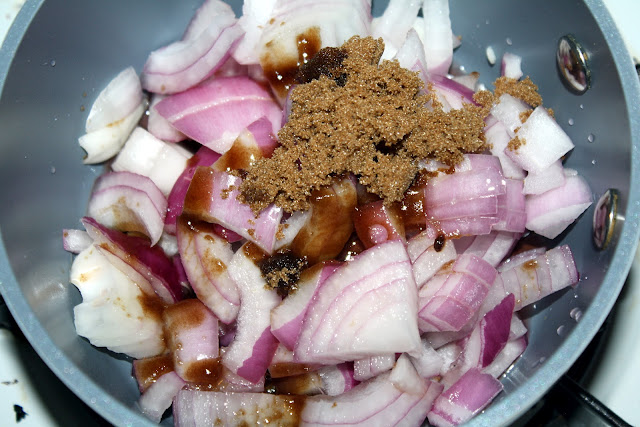 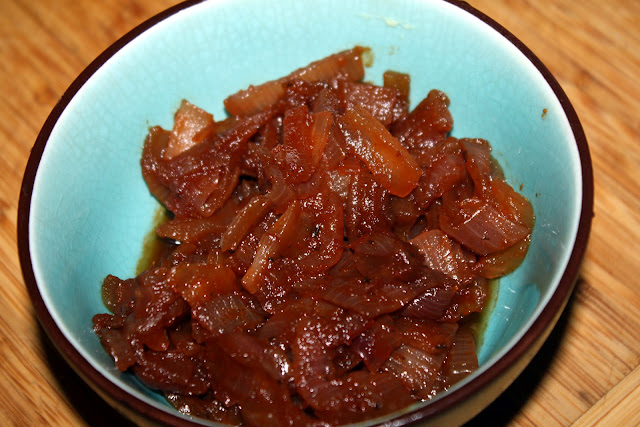 I thought a simple red onion relish would complement (what I hoped would be) the intense mayo and the barbecue-tinged chicken. In a small pot I placed a diced red onion with olive oil, balsamic vinegar, and a little bit of brown sugar. Forty minutes of cooking over a very low temperature and I had what I wanted. 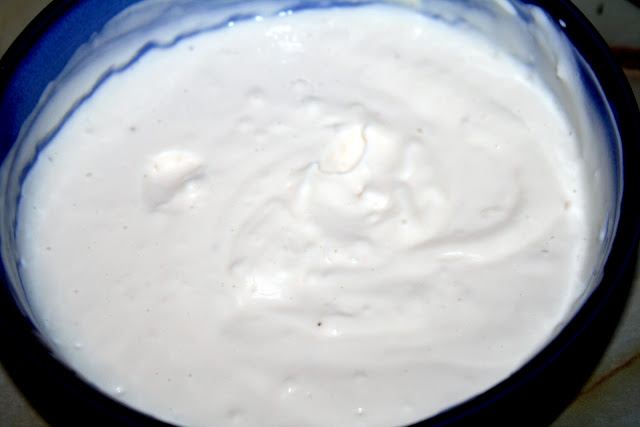 When the garlic had been in the vinegar long enough, I mixed it together with the mayo and took a taste.

Once - when challenged by an Armenian acquaintance of mine who knew how much I loved garlic - I added chopped raw garlic to a piece of basturma; that might have been close to this, but not probably not. This was more aggressive than anything I have ever eaten. Zankou's legendary garlic sauce tastes like Hidden Valley Ranch compared to this aioli. If Zankou is Justin Bieber, this shit is the Clash. 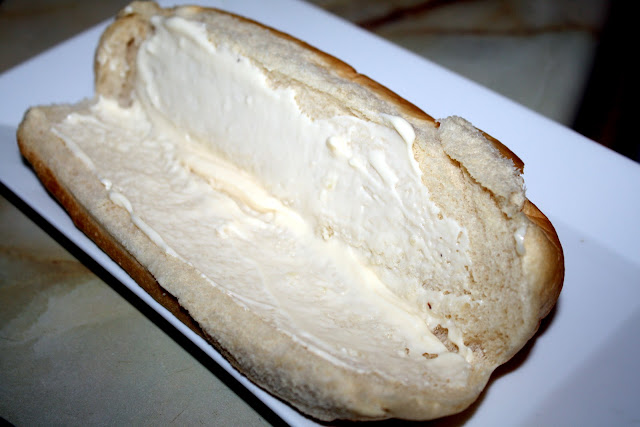 And spread it all over my roll. 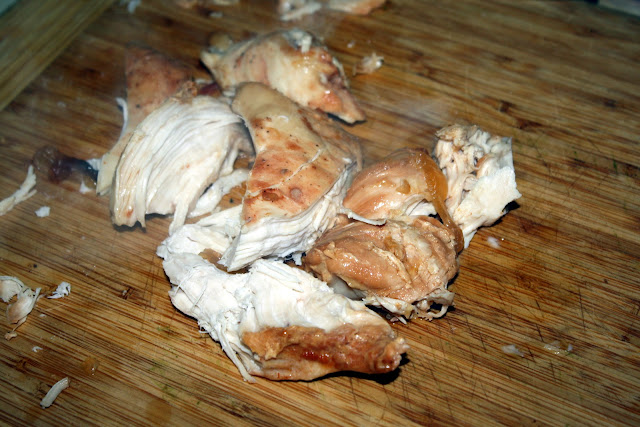 When the chicken came out of the slow-cooker I dropped it on the cutting board, as I usually do to test the tenderness, and it broke apart into several pieces. I used a fork to pull it apart into small shreds. 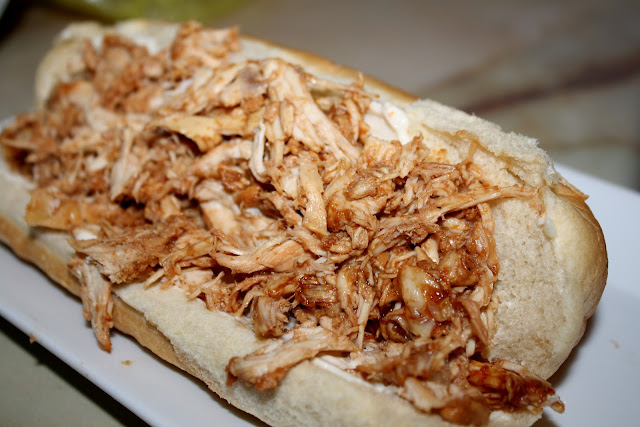 In addition to tasting great, these hero rolls hold plenty of filling and, even when the protein is very juicy, the rolls do not fall apart. So I piled in lots of chicken.

And then the relish went on top. 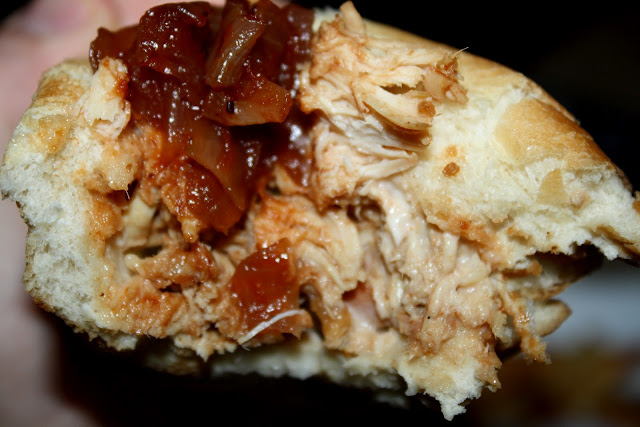 They were outstanding sandwiches, everything working together. The sweet relish and spicy mayo played off of each other just as I'd hoped and the chicken was great. Like the Polish Boy I wrote about one week ago, this was a one-time thing. It certainly wouldn't be as much fun to make this a second time - a lot of the fun was the wondering if there was any way that it would actually work - and if it wasn't as much fun, I'm just not sure I would like it as much. But it was damn good this time.
Posted by JustinM at 9:30 AM

"If Zankou is Justin Bieber, this shit is the Clash."

May be one of your best lines ever.

i envy your patience, pp

Damn it! You couldn't have eaten a BBQ chicken sandwich in yesterday's post like I had guessed you would?? I'm 0-1 now! :p

How long is the minimum time the chicken needs to cook for?

Hi Ben. It seems to be cooked-through after four hours; you just want to make sure there is no pink to it. However,it won't be nearly as tender, so if you can't let it cook for at least six hours, you might as well just roast the breasts in the oven for 35 minutes. They will still be good.