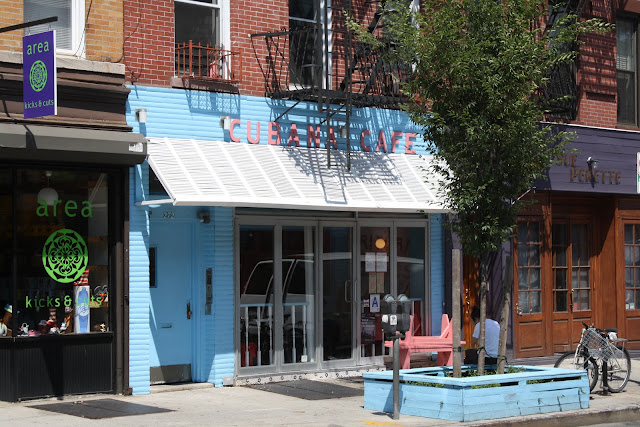 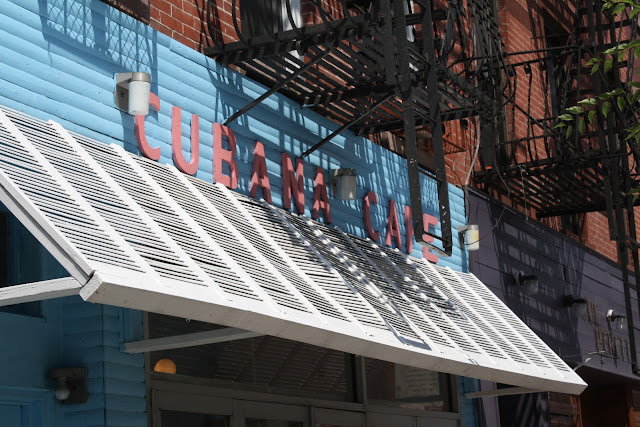 It just doesn't get any better than a Cuban sandwich. And yet I keep forgetting that. Like listening to Highway 61 Revisited or throwing around a baseball, I forget about Cuban sandwiches for long periods of time, sometimes more than a year, and then I return and the first bite elicits those same thoughts as hearing the opening of "Just Like Tom Thumb's Blues": Damn this is good. Why don't I do this more often?

The Cuban sandwich - although it's more fun to call it a "Cubano" - has been around a long time, probably hundreds of years: roast pork and sliced ham are slapped together with Swiss cheese, pickles and mustard. And then, in the step that takes it from merely good to fantastic, the ingredients are placed on Cuban bread - an airy, white baguette - and pressed. The cheese melts, the bread crisps up, and the whole thing becomes a brick of sandwich perfection.

In some places, salami is added to the sandwich as well. I'm sure it's delicious that way, but I've never had one and don't feel bad about that. In the middle of the last decade I used to frequent a place in Montrose, not far from Zeke's and La Cabanita - called Havana Beach Cafe. They had a pig roast for fifteen bucks every Tuesday and the place was decorated in the kind of lush fake plants and black-and-white photos of Havana that evoked wonderful sensations, but in truth the food was never any better than average and I was not surprised when it closed. Since those days, I can count on one hand the number of Cuban sandwiches I have eaten.

A little while ago - perhaps the hottest day I have yet experienced in New York - I got a craving for a Cuban sandwich, so we walked the mile and a half to Cubana Cafe, a restaurant I had passed by a few times in the last four months. 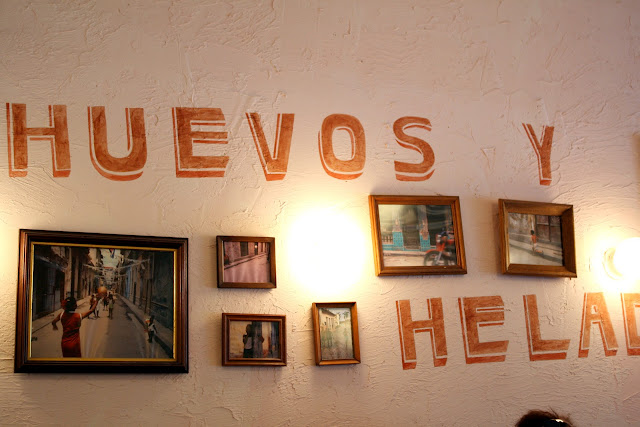 I do not believe I have ever visited a restaurant with tables packed together as tightly as Cuban Cafe. Most of the tables were three inches away from each other. If it had been crowded, I wouldn't have even entered the restaurant, but only about half the tables were occupied, so we sat in the corner. 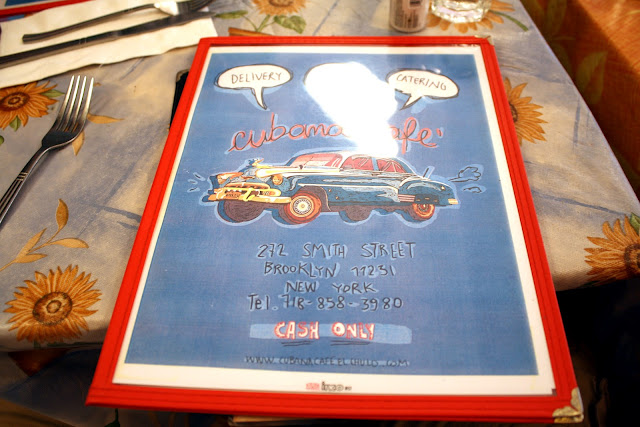 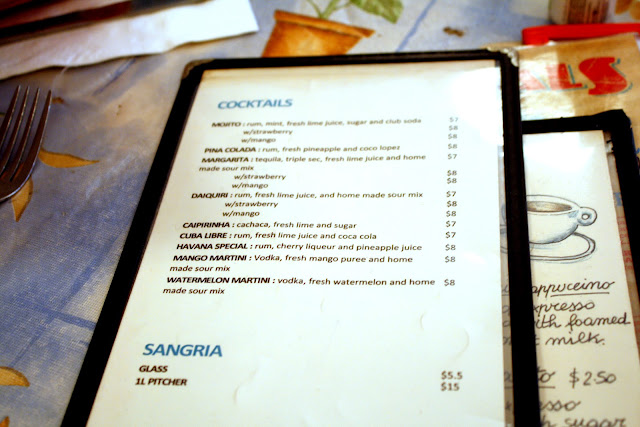 I looked at the menu, though there was no question I would be getting the Cuban sandwich. 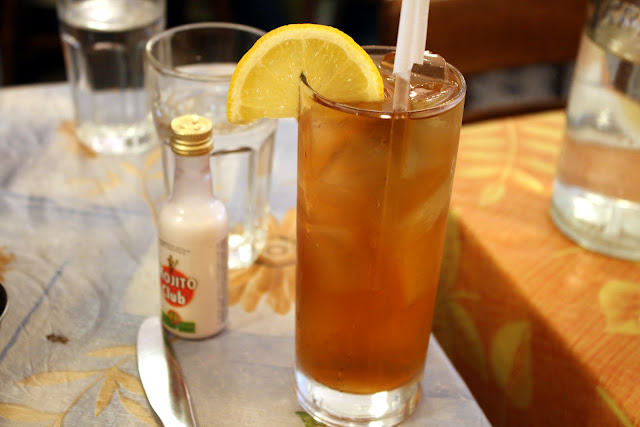 As I said, it was a very hot day. They set down a pitcher of water in front of us - well, actually they put it on the table next to us, but as I just mentioned, that meant it was right in front of us - and we each ordered an iced tea. 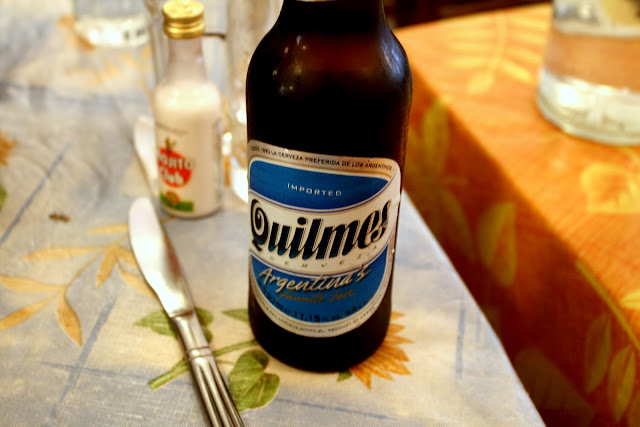 Then I noticed, on a shelf behind the bar, the selection of beers, including Quilmes. More than a decade ago, one of my best friends from high school spent a college semester down in Argentina. He came back raving about Quilmes, so I tracked it down and tried it. I remember really liking it then, but I had not had one in over a decade. So I decided to bring back an old memory.

It wasn't as good as I remembered it being. Aint't that always the case? But it wasn't bad by any means. 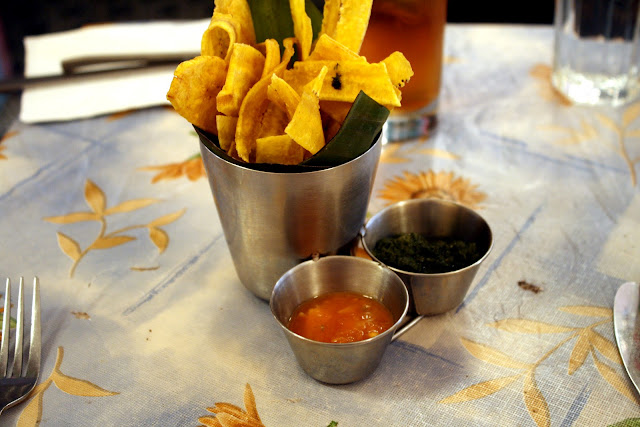 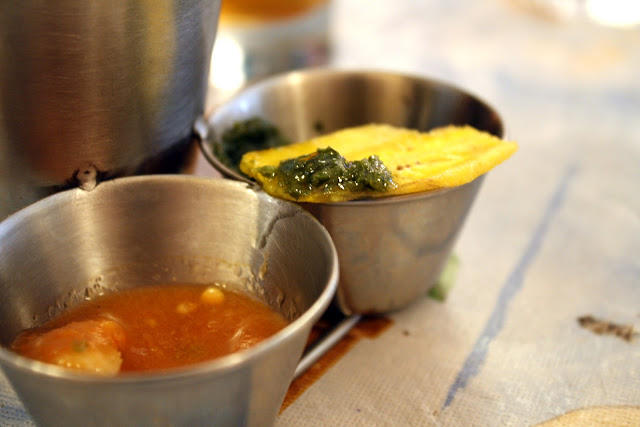 We were given a basket of plantain chips just after we placed our order, with two dipping sauces. The cilantro sauce was delicious, the chips themselves much less so. But I ate them, if only because they served as a great vehicle to deliver the cilantro sauce to my mouth. 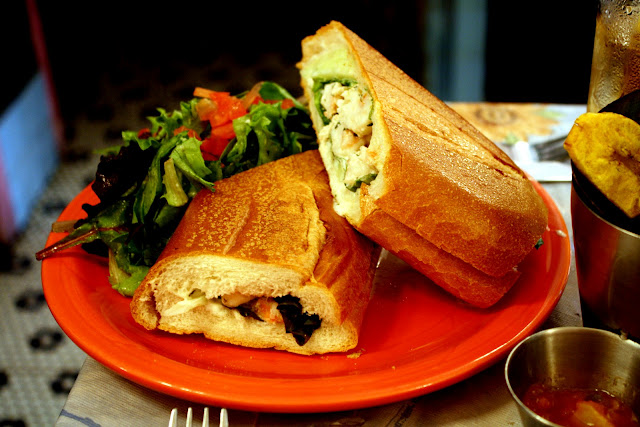 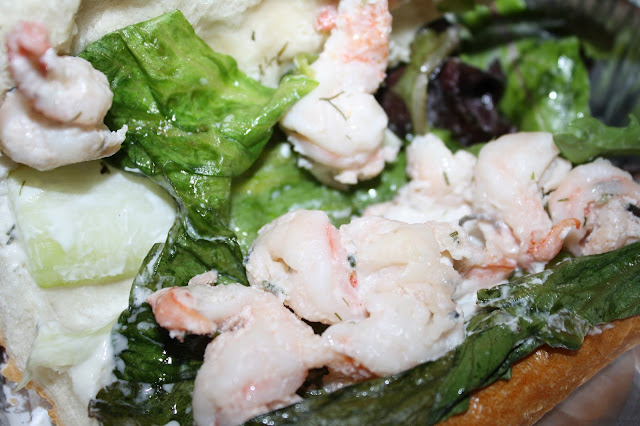 Elizabeth ordered a sandwich off of the specials menu: shrimp with cucumbers and yogurt sauce. She thought it was really good. I took a bite and definitely liked it, too. 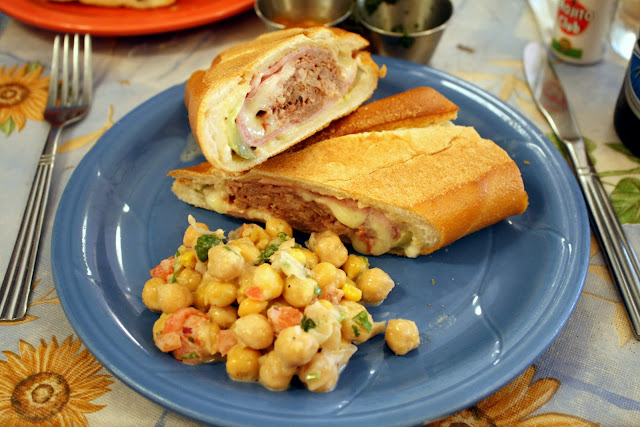 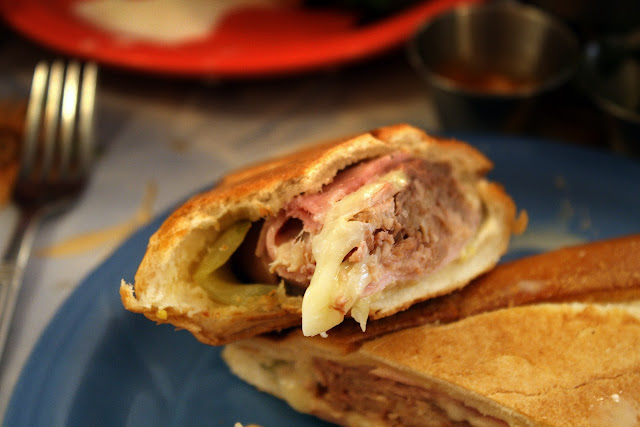 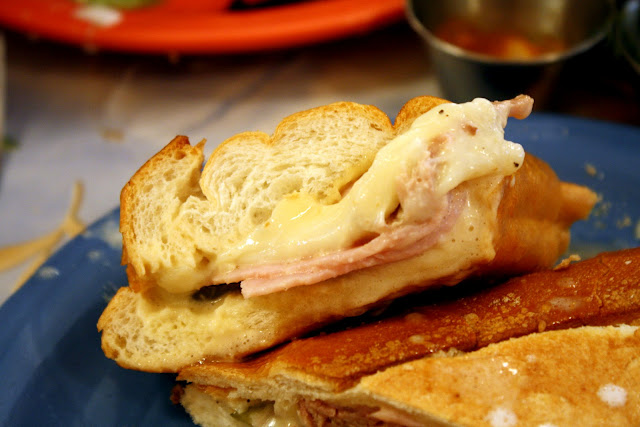 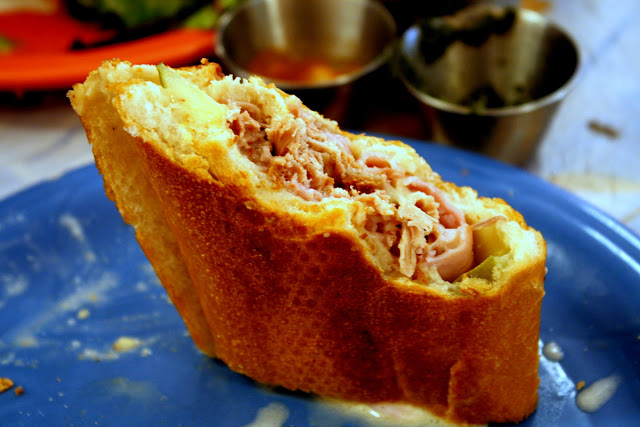 My Cuban sandwich was wonderful: a generous amount of ingredients, perfectly grilled together. Often, with a Cubano, the bread has been buttered and it's difficult to pick up, the sandwich and its contents slipping out onto your plate. This was warm and toasted but not at all greasy, unless you count the melted goop of cheese and mustard inside the sandwich, which I do not.

After eating half the sandwich I thought: You know, I could stop right now and in a few minutes I will feel full, and then I can eat the rest of this later.

But then another thought came to mind: F**k it, I'm eating the whole thing.

And I was glad I did.

I liked Cubana Cafe. It's possible that, like Havana Beach Cafe, I'm giving it a little too much credit just because I want to like the place. The service was pretty bad - our waiter was much more interested with hanging out on the sidewalk and greeting the people he knew who walked by than serving his actual customers - and the atmosphere that could be seen by some as "fun" could also be viewed as messy and careless. But I have no regrets about coming here. The prices were reasonable and the food good. I wouldn't mind returning, but first I have to try a lot more Cuban places in New York.
Posted by JustinM at 10:00 AM

I remember seeing Quilmes advertisements when I was in Chile and hearing them on the radio, the cheesy way the announcer said "Quilllllmessss" made me laugh. Whenever I'd have a beer down there, I'd order Quilmes just because it was fun to say. Tasty too.

pp- are those garbanzo beans? were they any good?

I'm not really sure - those did NOT look good to me and I did not try them.

Its a chickpea salad and is delicious if you like chickpeas! This place has great food but go for an early dinner (or late lunch) to avoid the too close seating.

That shrimp sandwich was amazing. So, so good. What was not good was walking in the 100 degree heat with disgusting amounts of humidity. I thought you were going to have to leave me along the way.