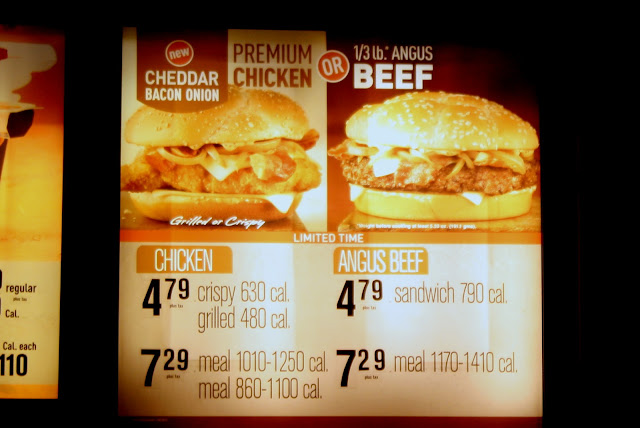 I was at the deli counter of a local market a few days ago, getting some sliced cheese for burgers, when a guy behind the counter asked me what I would call the best cheese in the world.

"Well," I said, not at all prepared, buying myself some time - I don't believe anyone has ever asked me that before; I've been asked what beer or wine is the best, and what barbecue, and what fast food, but never about cheese - "My favorites in America are Humboldt Fog and Point Reyes Blue, but it's hard to top a good Morbier."

"No!" he exclaimed, and his eyes got wide as a smile crept across his face, as if he were about to tell me a big secret. I leaned in.

I smiled pleasantly and said nothing. I mean, what the hell was I supposed to say? Maybe the guy hasn't tried very many cheeses; saying something condescending would just make me rude. And maybe he has tried them all and he likes cheddar the best. His opinion certainly is no less valid than mine. The world would be boring if we were all the same.

I was thinking about that very conversation when out for a walk yesterday (I was on my way to Trader Joe's and making a mental shopping list, wondering if there might be any new cheeses to try) when I passed by McDonald's and spotted a banner for a new Cheddar Bacon Onion burger. Also available were grilled and crispy chicken sandwiches. I remembered seeing an ad for the sandwiches when I was in Florida in April - they were testing them in the area at the time - but I had not bothered to seek them out.

So on the way back from TJ's I stopped in and waited 15 minutes behind two customers (this was my third time here in the last five months and both other visits were unpleasant; it is not a model of efficiency). I placed my order for the Bacon Onion Cheddar Crispy Chicken, waited a couple minutes, received my sandwich and continued home. 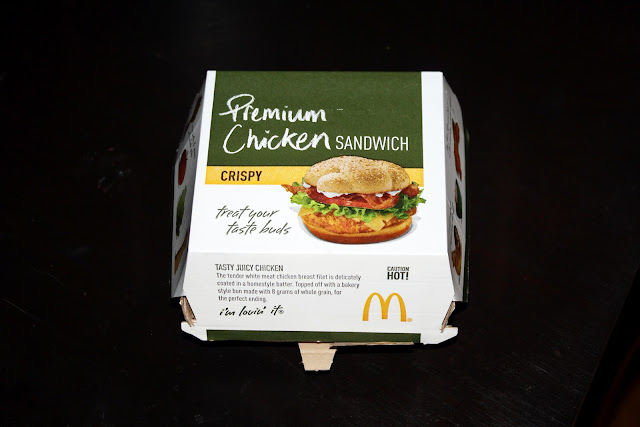 I forgot to check my order at McDonald's and was relieved to find that they had given me the correct sandwich. 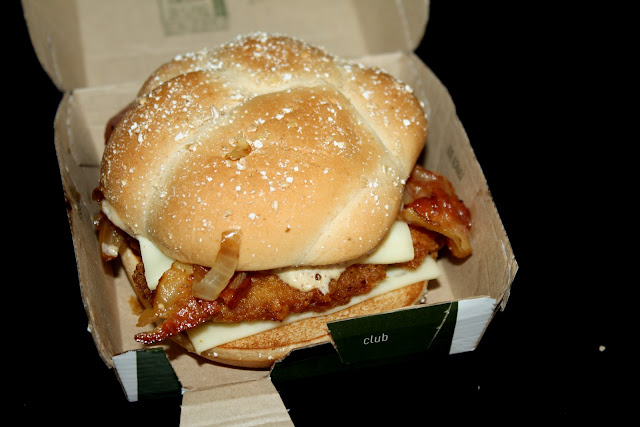 The "bakery-style" bun looked attractive, but it was a little too firm. A fresher, softer bun would have been welcome. This was, at best, just okay. 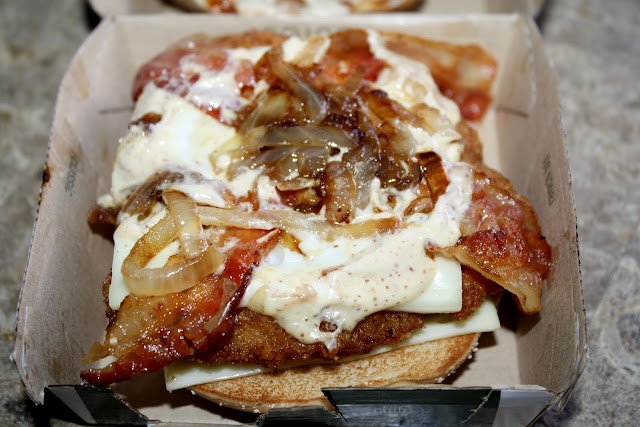 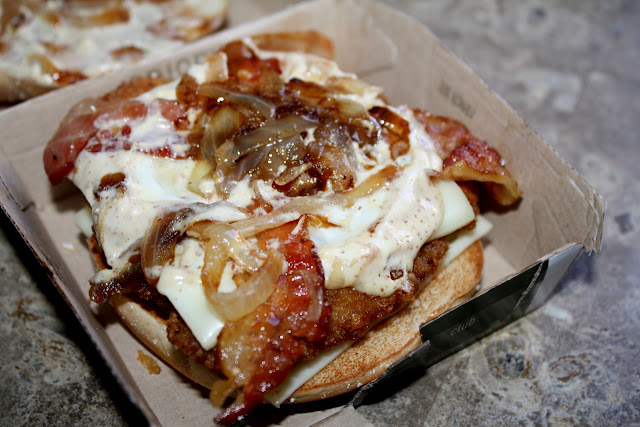 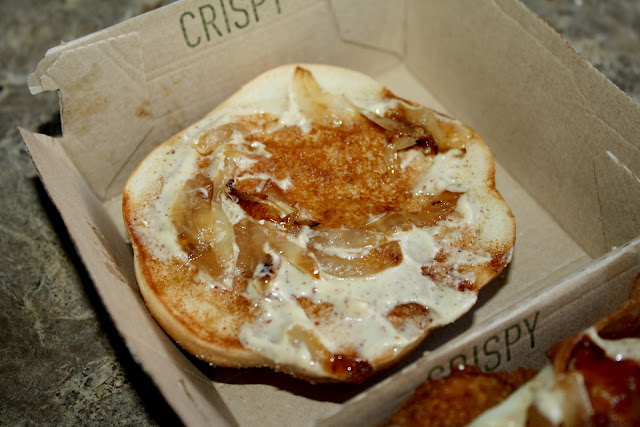 I very much enjoyed the caramelized onions and the creamy mustard sauce. 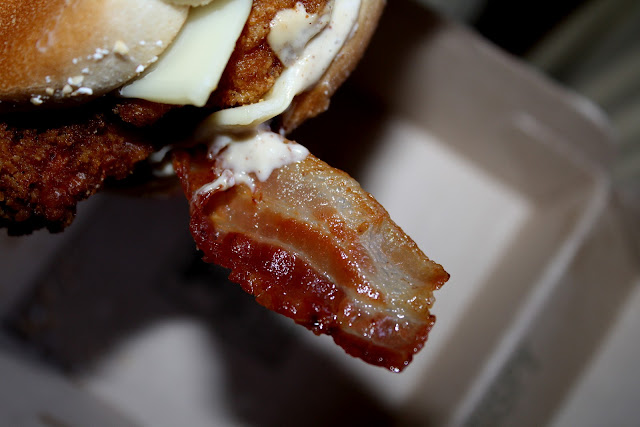 The bacon, on the other hand, was not good. It was crispy, I will give it that, but most of it was fat. Grub Grade had a nice poll a couple of weeks ago on the best fast food bacon. While I did not agree with the winner - Arby's has much better bacon than anything Wendy's puts out, though I imagine the fact that Wendy's has twice as many units as Arby's skewed the results - I appreciated the fact that McDonald's was near the bottom.

I don't believe I have ever had any bacon from McDonald's that I didn't remove after one bite, and this was no exception. 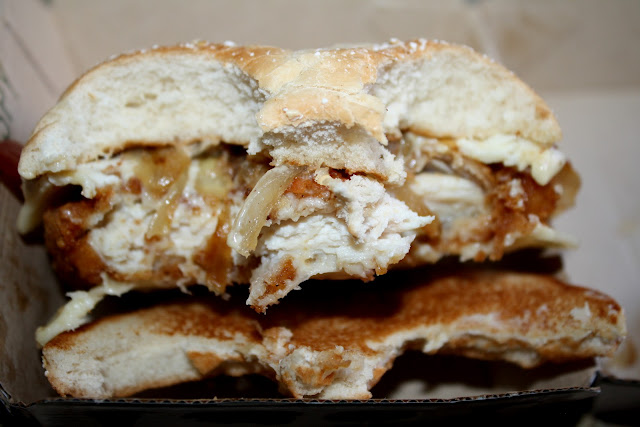 Maybe it's the fact that I rarely eat fast food any more, but I was surprised, almost from the first bite, at how salty this sandwich was. The menu board advertises the sandwich as being 630 calories; I am far more interested in the sodium numbers. (Not that I would ever avoid a fast food product because of health reasons, I just am curious.)

The white cheddar added nothing to the sandwich either, all it did was add to the saltiness.

If I still lived in South Pasadena and McDonald's was the closest place to get a bite to eat, I would probably give the burger a try. But considering there are dozens of places closer to me now than McDonald's, including several I have yet to try, there is no reason for me to try one of these Cheddar Bacon Onion sandwiches again.
Posted by JustinM at 9:30 AM

hmm looks good i hope it comes to my mcd's!

Nothing wrong with a good mature cheddar!

Then again I'm from the UK and we love our cheddar's and stiltons!

Little Black Bomber - Welsh cheese, the best I have ever tasted!

Wensleydale is in my top 5.

I am a cheese fanatic myself... (favorites do include Tartufo, manchego gorgonzola and yes, with great excitement I also say: extra sharp cheddar ! I know it's not exactly exotic; but it is classically comforting.) while I happen to hold the general belief that McD's is all around awful with their faux "high quality healthy ingredients, all natural organic" does anyone actually believe that? I feel it's almost condescending to assume the public would believe that. If I come off sounding militant I do apologize, I just feel very passionately about "Phonies" Having said all that, My husband loves them. So occasionally I find myself at the drive through window with him, silently judging his choices (I'm also incredibly hypocritical ) But he is so happy to always order the new sandwich. This time it was the Bacon Cheddar Onion " When we arrived home, he asked me if I wanted a bite of his chicken. (I had assumed it was beef which I do not eat) for some strange reason I said yes and I thought it was truly delicious. But maybe it was just from having one bite, as I usually despise them. I do feel guilty. Will you try it again? Agreed with you on the bun by the way. This is a great site! Congrats :)

Also I tried it grilled. Maybe that makes a difference?

It could just be one of those things where you catch lightning in a bottle. For example, I hate Burger King. I think McDonald's is gourmet compared to BK. But back in 2010 I tried their Whiplash Whopper at a BK in Buelton, CA, of all places, and it was outstanding. Freaking delicious. But I have not had anything since then that was remotely decent from BK. It happens.

No, I will not try it again. If I lived in a place with very few restaurants, then yes I probably would. But I live in NYC now. There are just too many places to discover for me to go back and retry something I didn't loves.

I live in Brooklyn, NY and tried the Bacon Onion Cheddar Angus burger yesterday. It wasn't that great. The caramelized onions were definitely a nice touch, but the nasty bacon and over processed cheddar cheese sank the burger. I won't even bother trying the chicken.