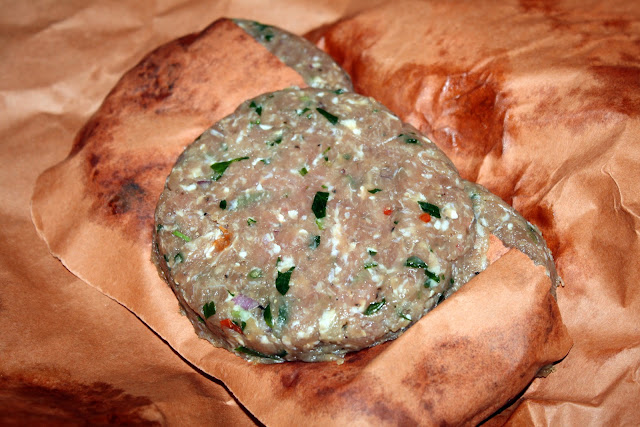 There were a few years - this seems so strange to write, seeing as how I eat hamburgers at least once a week these days - when I almost never touched a beef burger. When I was 20, I went on a diet for a few months; I substituted Jennie-O's 99% fat-free ground turkey for beef in every burger I made. After a few meals of dried-out burgers, I was able to make a pretty damn good one, mixed with chopped onion and cilantro and dusted with lemon-pepper seasoning. I loved them. By the time I had gotten into the shape I wanted, I preferred turkey burgers to beef burgers every time.

I don't remember how long that lasted. A few years, I think. At this point I'm back to preferring beef burgers. I still love turkey burgers, but they are the exception now, not the rule. However, when I saw Paisanos had already-formed turkey patties, with a blend of parsley, peppers, and spices, there was no doubt I had to try them. 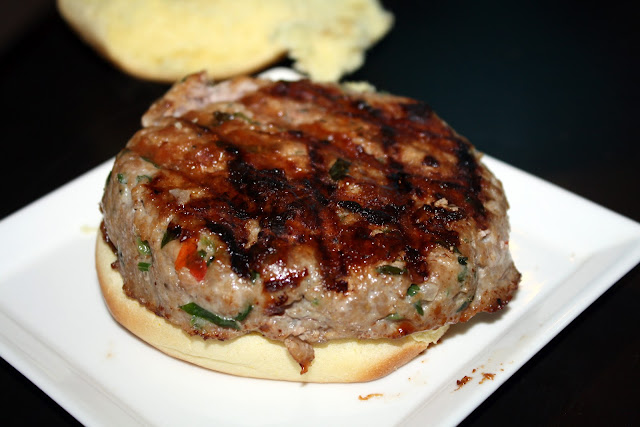 I cooked them on the indoor grill, about five minutes per side, and placed the patty on an egg bun. 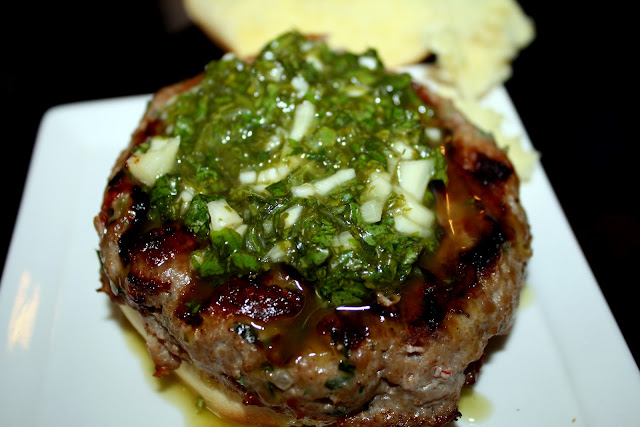 I've written this many times over the years, and here's one more: the chimichurri sauce Trader Joe's used to carry was the best I have ever tried. Every chimichurri I've ever made has been a futile attempt to recreate it (or at the very least an homage to it, as is the case here).

I chopped up a few cloves of garlic, not very finely. I then let them sit in olive oil while I diced up a bunch of cilantro and added it to the mix, with the juice of a large lemon, cracked black pepper and some red chili flakes. I love garlic as much as anyone I've ever met, but even I have to let this sit for at least an hour or two or the flavor of the garlic is too intense.

But when you do let it sit long enough for the flavors to meld... it's awesome. 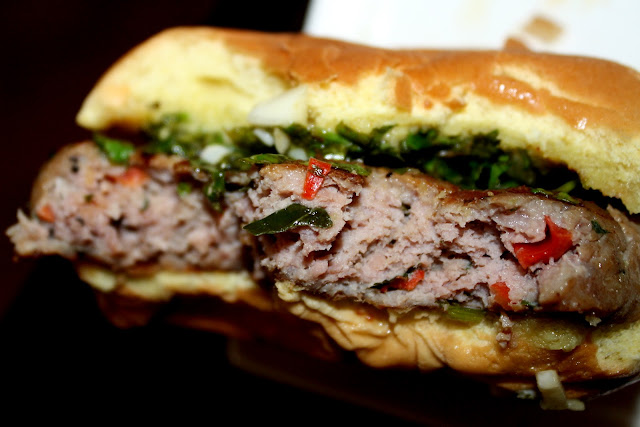 I hate to sound like a broken record constantly praising Paisanos products - actually, what am I talking about, I don't mind at all - but this was the best turkey burger I have ever had. And that includes any restaurant version I have ever eaten. Whatever spices they blend into the meat is truly an inspired choice. This burger was juicy and full of flavor. My chimichurri was great but I'm not going to kid myself: it merely complemented the burger a little... it had almost nothing to do with how magnificent this burger was.

I won't be switching away from the brisket/short rib burger patties and making turkey burgers 100% of the time, but I absolutely will be adding these to the rotation and eating turkey burgers much more frequently than I have in the last few years. This was just a great burger. Someone could probably open a restaurant selling nothing but these and... actually, that gives me an idea...
Posted by JustinM at 9:30 AM

If you opened a restaurant selling turkey burgers - or actually, selling anything - I would cross the pond just to try it.

What type of indoor grill do you use?

Based on those grill marks, I bet you use a Cuisinart Griddler, or something very similar. I love mine.

And that looks fabulous.

Justin: For this I used my Sanyo smokeless indoor grill with 200 sq. inches of cooking surface. My parents gave it to me when I moved. Back in Pasadena I used a Delonghi that was almost three times the price (the Sanyo was only 40 bucks) but after about a dozen uses I can't tell any difference between the two.

I also use my small Foreman grill (when I'm just cooking for myself) or I use my Krups panini press as a grill on certain occasions, though that is the hardest of three to clean when I make a mess.

Michelle: It was, no doubt.

Bekah: Close! I like the Cuisinart Griddler but I don't see any need to buy one with all the other kitchen appliances I have.

I absolutely love chimichurri! If it wasn't for the fact that I would have it with almost anything if I wasn't such a horrible cook that I would set it on fire...

i seem to remember liking the cajun veggie burger at hamburger hamlet more than their actual beef burgers. did you ever try that growing up?

Ritchie: It doesn't require any cooking - would you still set it on fire? If so, I don't know what to tell you... you might indeed be a bad cook.

Anon: No, Hamburger Hamlet was not a part of my life growing up.