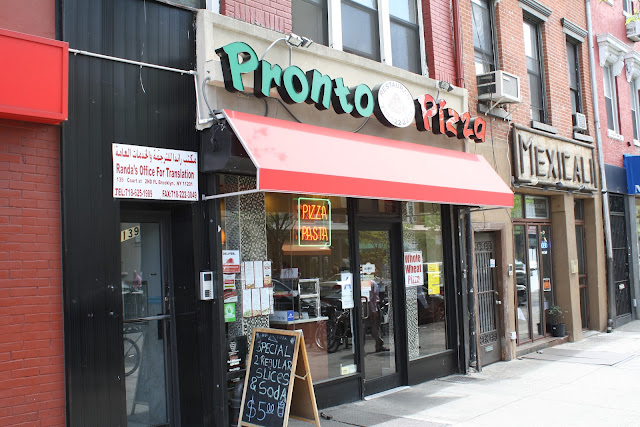 I had noticed Pronto Pizza quite a few times - it's right across the street from Trader Joe's. There always seems to be a crowd at lunchtime, though I realized from the first time I saw the place that that might have more to do with their lunch special: two regular slices and a soda for five bucks. In a neighborhood where bagel sandwiches can cost close to ten bucks and a six-pack of Pacifico at a local market is $13.99, any place with a five-dollar lunch is going to pull a crowd.

But I love the slices at My Little Pizzeria. The whole pies I've shown you multiple times are just fine, as good as almost anything I ate back in Southern California, but the pizza-by-the-slice is where My Little Pizzeria really shines. Their fresh mozzarella slice (that's the photo just below the "F" in the header of this blog) is one of the top 10 slices of my life. So when I am in the mood for a slice of pizza, I almost always go there.

But I don't go there all the time. A relationship with a pizza joint isn't like a favorite baseball team. It's okay to stray from time to time. It's like my relationship with Eliz- er, never mind. I went to Pronto Pizza the other day. Let's just leave it at that. 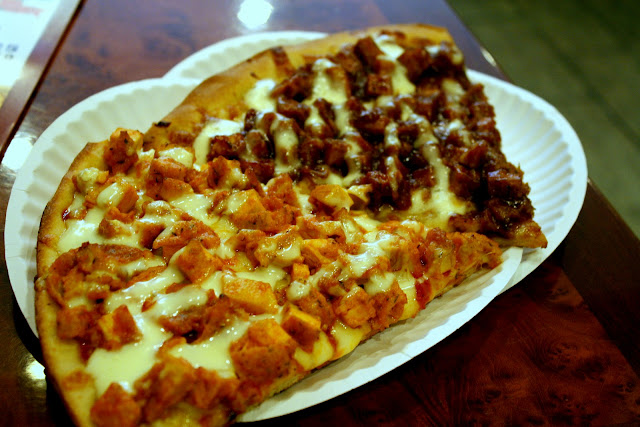 "Lunch special?" the guy behind the counter asked me as soon as I walked in. I suppose that's what most people get.

"What's your most popular slice?" I asked the man, gesturing towards the dozen or so varieties in the display cases.

"Either the barbecue chicken or the buffalo chicken," was his reply.

He grabbed a slice of each and put them in the oven while I took a seat. Two minutes later they came out. 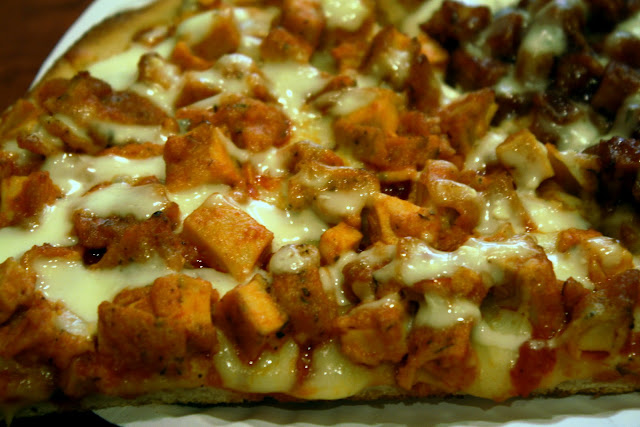 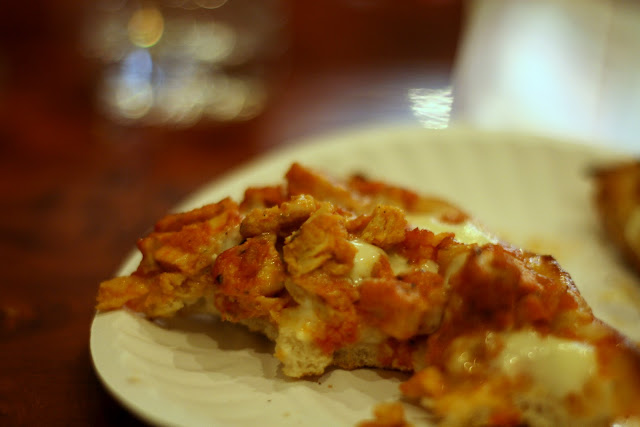 I enjoyed the buffalo chicken. There was the perfect amount of hot sauce: enough so that I felt it with each bite, but not too much to overwhelm the flavors.

The crust was thicker than almost any other crust around here - not quite deep dish pizza, but pretty close. It wasn't bad, not at all, but it wasn't what I think of when I think of New York Pizza. It was super-crisp, almost like a French bread pizza. (It would have been wonderful dusted with some cornmeal on the bottom.) 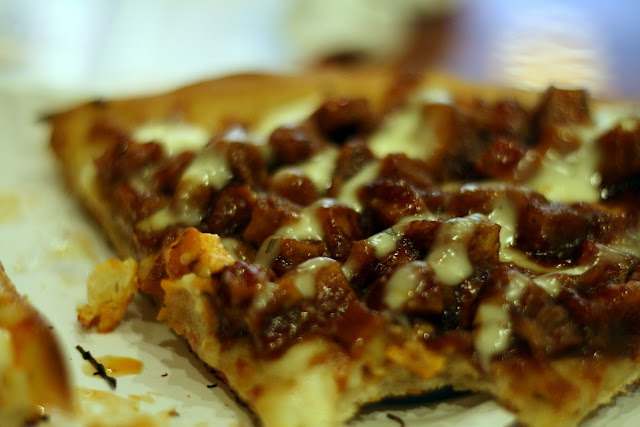 I was less enamored with the barbecue chicken slice. The chicken and the crust were the same as the buffalo pie, but the sauce on this slice was much too sweet... and there was way too much of it. There was nothing I could do. I actually didn't even finish the slice, and I don't remember the last time that happened. And it's entirely possible it's never happened.

Pronto isn't going to replace My Little Pizzeria in my rotation. It's possible I won't ever return. But I would like to go back for one of these buffalo chicken slices to take home and add celery, like I did with that DiGiornno pizza the other night. That sounds pretty good.
Posted by JustinM at 9:30 AM

That's pretty cool, you can get pizza AND have Randa meet all your arabic translation needs in one stop!

Have you been to Mexicali? I wanna hear about that!

Are you sure you're in NY, cause those slices look THICK! Too bad they weren't the bomb, but you gave it it a good go and got some good ideas.