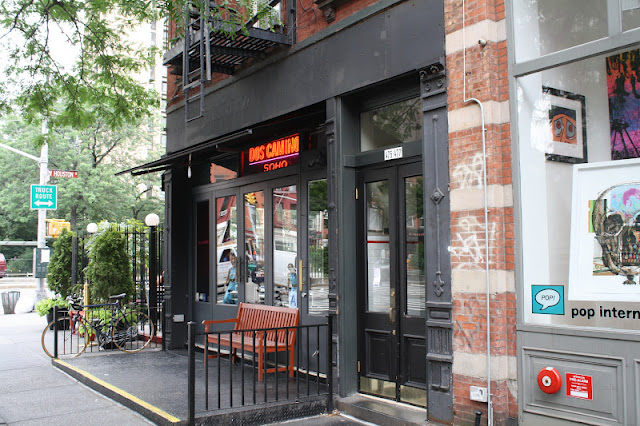 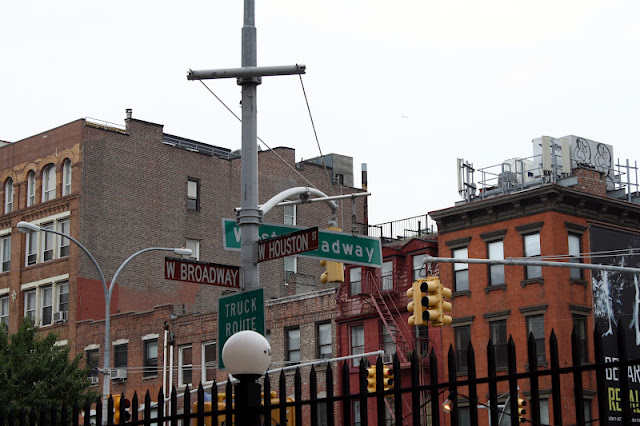 I met Elizabeth at her office on a muggy July day and we walked around for a bit in search of food. I had not thought of getting Mexican - to be honest it had never occurred to me that there would be Mexican food in this area, it seemed like every restaurant we walked by was European - but the large patio at Dos Caminos looked like a nice place to sit. 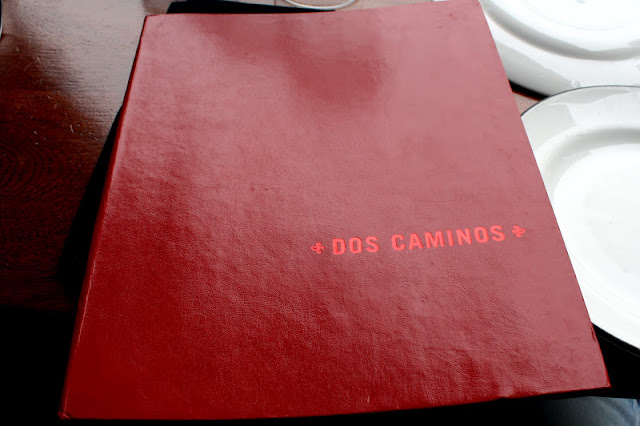 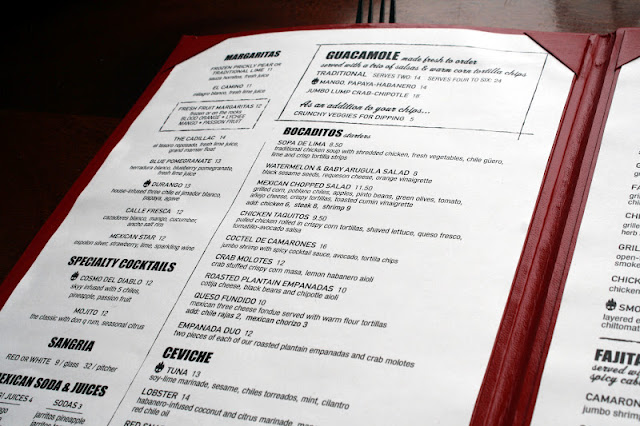 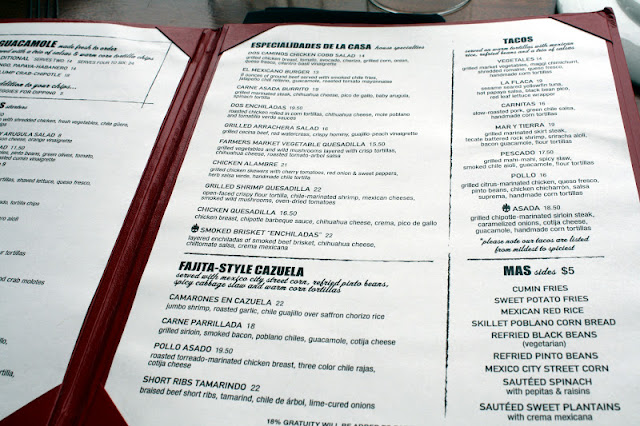 If I liked guacamole, I would have sprung for the crab-chipotle version, as I love both those flavors. Even at eighteen dollars. 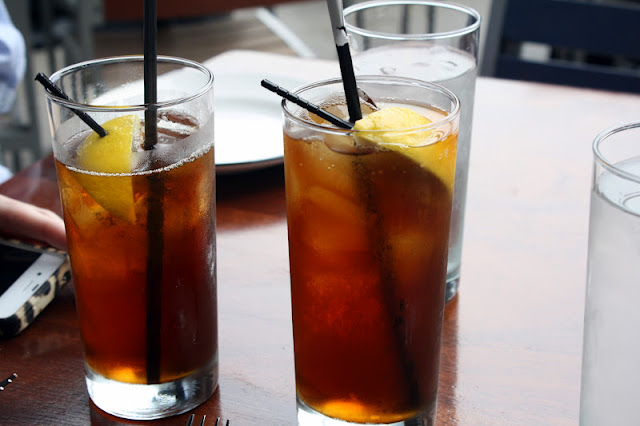 As I mentioned, it was a muggy day. The service was great - our waiter constantly filled my iced tea and chatted with us. He encouraged us to try a margarita, but neither of us could bring ourselves to do it in the middle of a weekday. I drank at least a half-dozen glasses of iced tea. 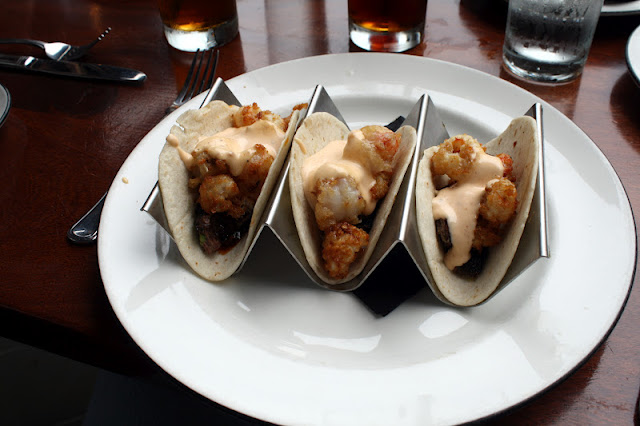 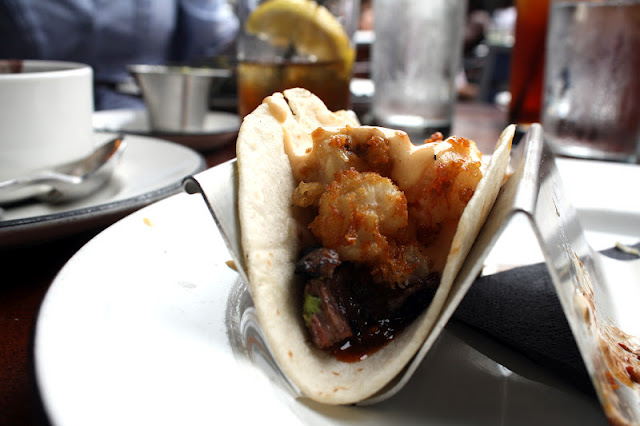 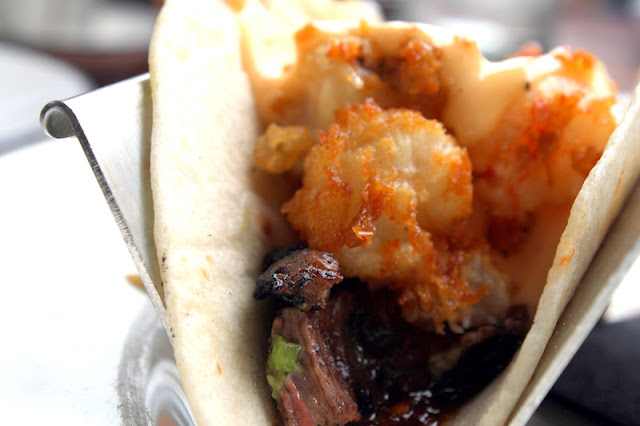 I had planned to get the smoked brisket enchiladas, but the "mar y tierra" tacos sounded too good to pass up: marinated skirt steak, Tecate-battered shrimp, and Sriracha aioli. (And also bacon guacamole, which I asked be removed.)

The shrimp were tasty, I could have eaten an entire bucket of them. Half of the bites of skirt steak were good, half were much too chewy. (Perhaps whoever sliced it got a little careless in parts.) The Sriracho aioli was delicious, though as nicely as it complemented the shrimp, it distracted from the steak. There was roughly twice as much aioli as was necessary and it unfortunately overpowered each bite of the tacos. 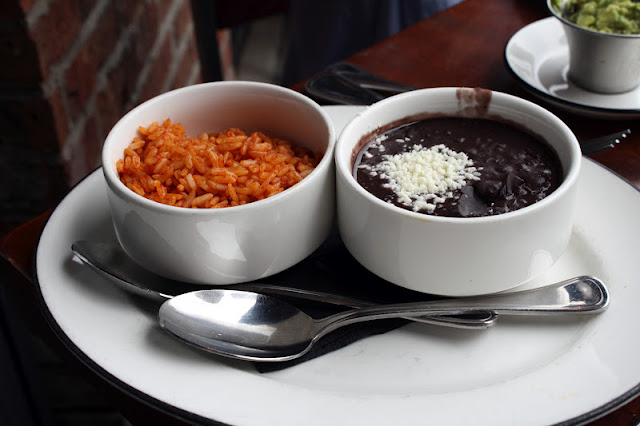 My rice was tasty. I'm not qualified to comment on the beans, as I am not a big fan. I tried these and thought they were okay, which is as big a compliment as I can give. 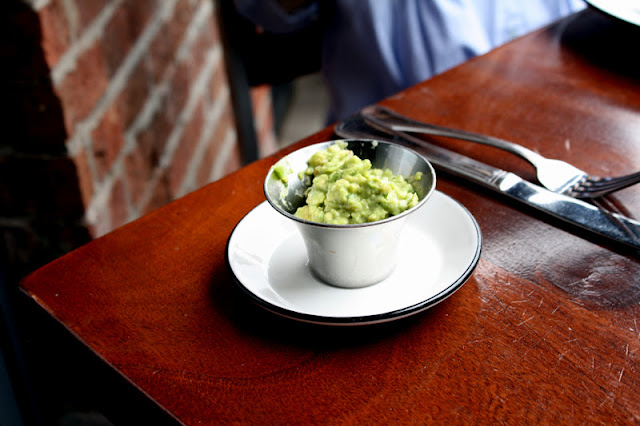 When I asked for my tacos without the bacon guacamole, the waiter asked Elizabeth if she likes guacamole. When she answered affirmatively, he said to me: "I'll just bring it on the side so she can have it." Like I said, the service was great. Elizabeth said the guacamole was really good. 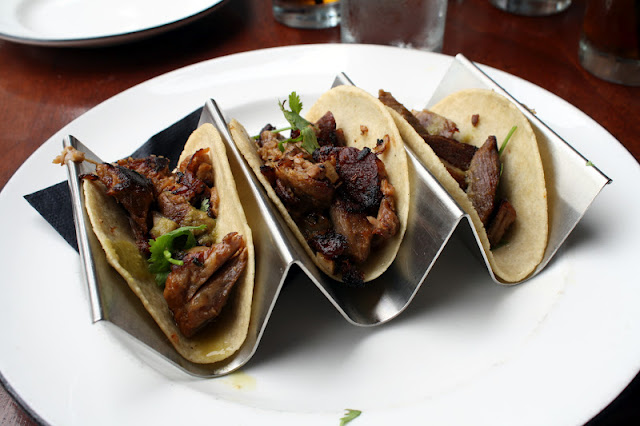 Elizabeth had the carnitas tacos. She thought they were "okay" but wished the pieces of meat had been smaller. One of the tacos contained large hunks of fat.

I don't have any regrets about visiting Dos Caminos, but I won't be going back. You may have noticed the prices: my three little tacos were nineteen dollars. (Elizabeth's carnitas tacos were sixteen.) Even by New York standards this seems silly. At the table next to us were a couple of guys on an expense account, and if I were in their place (or if our tacos had been great) I would probably feel differently. But there is zero doubt in my mind that I will find cheaper and better tacos in New York.
Posted by JustinM at 9:00 AM

i hate it when they oversauce things. i wish more places would just give the sauce on the side.

Yeah, and it's not like this was a one-dollar street taco... this was battered shrimp and marinated skirt steak. It didn't really need any sauce.

I always liked when you wrote about the tacos from the truck in Pasadena. Those looked better!

Digging the new collage though!

Thanks. I wanted to reflect some of the things I've eaten this year. I still kept a few of the oldies, though - you may recognize the top right, or the nachos with Trappey's!

Aioli? What fresh hell is this?

Stop at the El Taquito Mexicano truck on your way home tonight and ask if you can get aioli on your al pastor.

I miss the taco truck!

My Spanish is atrocious, but I bet I would be able to understand the comments I'd get if I made that request.