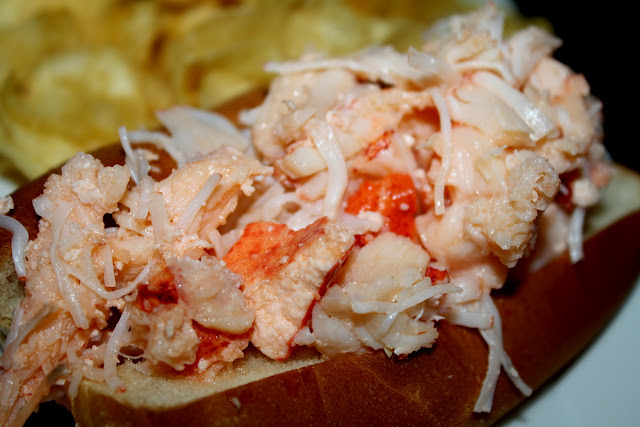 Elizabeth didn't get to accompany me and my parents to Massachusetts last month, which meant she missed out on eating lobster for multiple meals in a row. And she loves lobster as much as I do. So one night a little while ago I decided to surprise her. 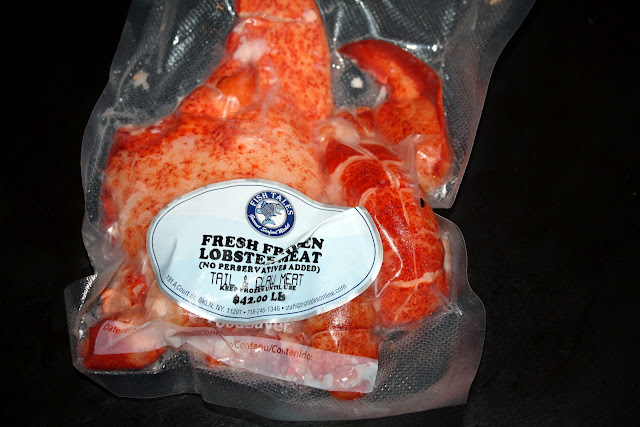 I went to Fish Tales in Cobble Hill. I'd seen the place a while back on Throwdown! with Bobby Flay; Bobby had defeated the shop at making Manhattan fish chowder. It was a cute little shop. Their prices weren't cheap, but, what can you do? And at least all of their products looked to be very high quality. 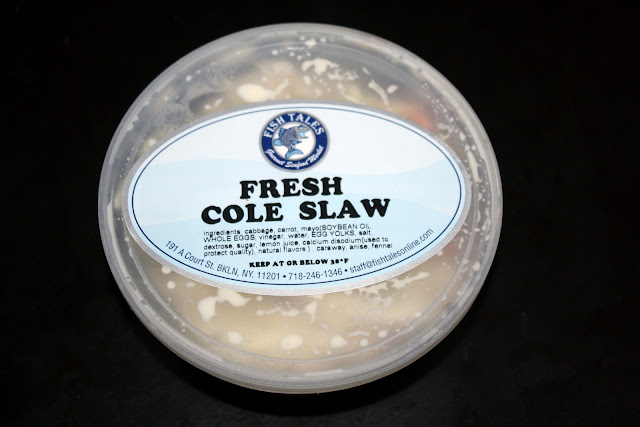 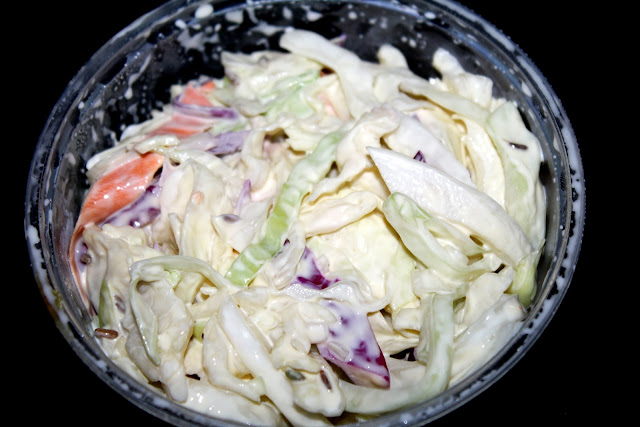 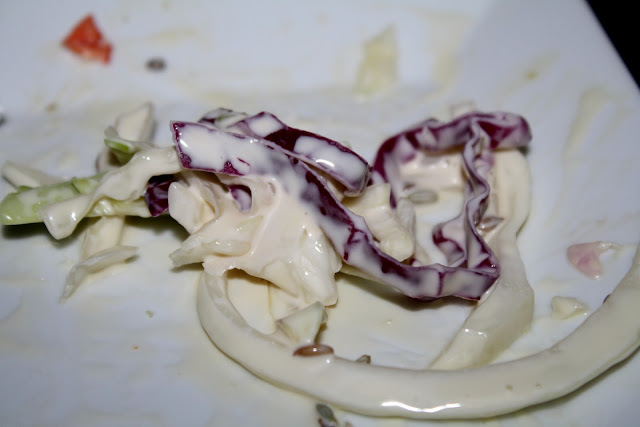 I got a container of their cole slaw, hoping it would be a good complement to the lobster rolls. The first bite tasted strongly of black licorice; I was not surprised to see fennel and anise in the ingredients. Once I got past that initial blast, I liked the fresh slaw. 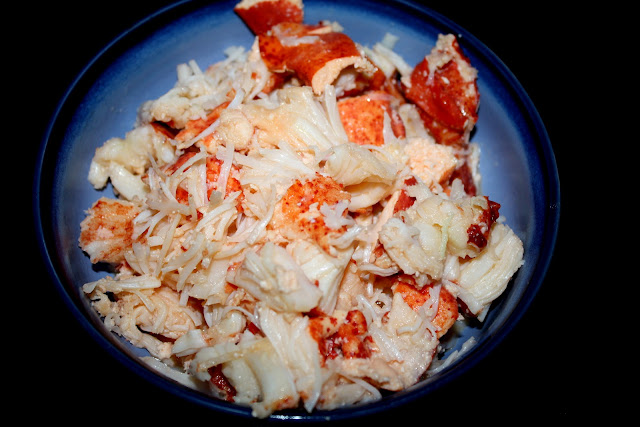 I defrosted the lobster, first under some running water and then in the fridge for a few hours. (Ideally I would let it sit in the fridge overnight, but, because this was a surprise for that night's dinner, I did not have that option.) I melted a half-cup of butter in a pan then tossed the lobster meat around in it for two minutes or so, just enough to warm it up. 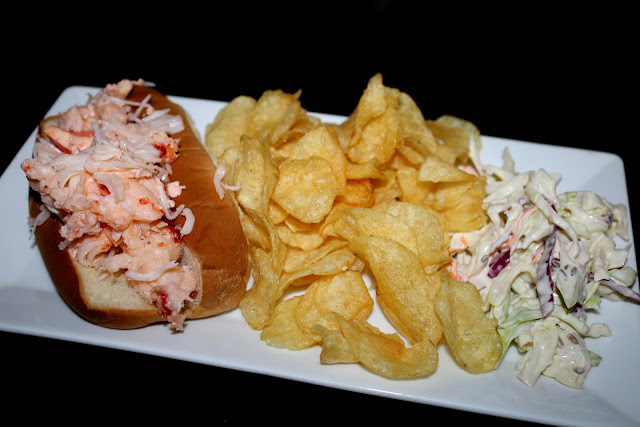 I spooned the lobster into split-top rolls (which I had heated in the oven for no more than 90 seconds, just to get them lightly toasted), heated some potato chips in the oven for a few minutes, and added the slaw to the plate. 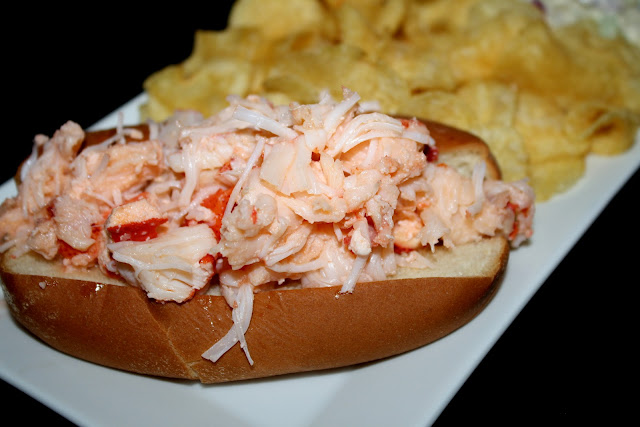 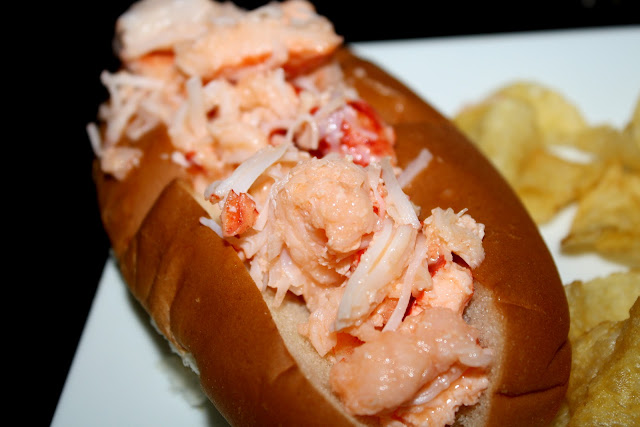 It was delicious. Very good lobster meat, melting on the tongue with no accompaniments but warm butter. I had thought it was on the pricey side when I bought it, but there was enough lobster for each of us to have two rolls for dinner - all four of them full of meat - and for me to have one for lunch (okay, yeah, breakfast) the next day. So it really wasn't too bad.

And, at any rate, Elizabeth loved her surprise.

That's a very, nice surprise. Do you always prefer hot buttered lobster rolls to the New England mayo based style?

No, I love them both. I don't remember why I decided to do it this way - I guess I just felt in the mood for the butter-based rolls. I'd actually planned to go back and get more lobster and make them with mayo before I wrote about them... but I never got around to it.

That is awesome and looks delicious!!! Lobster rolls are one of my favorite dishes!

chips in da oven? at what temp and for how long?

350 degrees. Less than five minutes. You just want to heat them, get them to sweat some of the oil that they were previously fried in. It makes a big difference. These were Lay's Kettle Cooked chips.