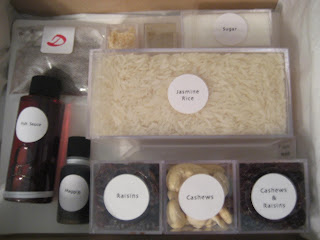 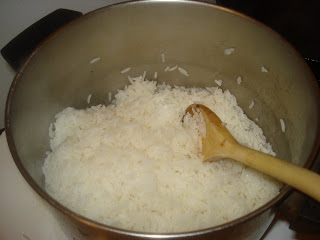 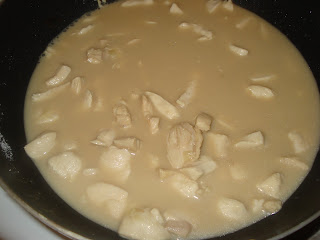 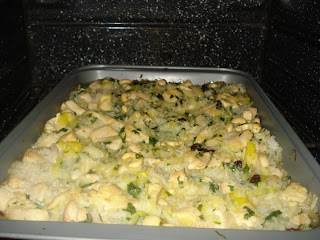 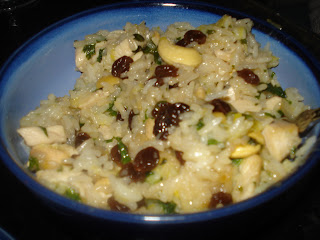 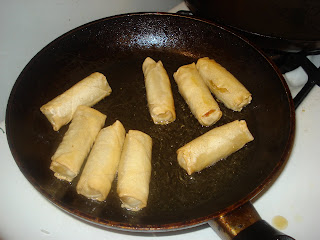 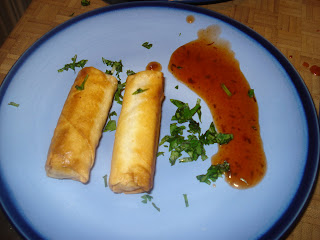 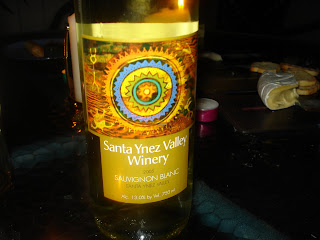 My friend Elizabeth has given me some of the best presents I have ever received (including my own olive tree.) For Christmas this year she bought me something called Destination Dinners. (http://www.destinationdinners.com/) For three months I will get a recipe kit from a different location, complete with pre-measured indigenous spices and sauces. My first kit was a dish called "Khao Ob Sapparod "- pineapple chicken - from Bangkok, Thailand.

The other night some friends came over and I cooked this. The kit included jasmine rice, fish sauce, maggi (a seasoned soy sauce,) cashews, raisins and palm sugar. In addition, I needed to buy a pineapple, two chicken breasts, cilantro and coconut milk.

While the rice was cooking I chopped the chicken up and cooked it in my wok. After it was done I added the coconut milk, spices, raisins and cashews. Meanwhile I cut the meat out of the pineapple and pulsed it in the blender. The dish is meant to be served inside the pineapple, which looks like quite an elegant presentation. However, the skin on my pineapple fell apart and I decided to serve the dish in bowls. (This being my first time cooking the dish, I decided to concentrate on following the recipe properly rather than the appearance of the final product.)

When the coconut milk starting foaming in the wok, I combined everything in a baking pan with some chopped cilantro and let it bake in the oven for about 15 minutes. While my friends talked and drank wine on the patio, I snuck a couple tastes just to make sure it wasn't terrible. In fact, it was one of the best things that has ever come out of my kitchen. (I can't take much credit for it, though. Since almost every ingredient is pre-measured and the directions are so simple, I'm pretty sure my dog could have made it.)

I quickly fried up some store-bought crab and shrimp spring rolls. These were not necessary, but just in case the Khao Ob Sapparod was terrible, I wanted to have something to nosh on while waiting for a pizza to be delivered. Everyone loved the dish, though.

According to the pamphlet included in my kit, the traditional Thai beverage of choice is water, so as not to interfere with the enjoyment of the food. However, it added, if you wish to serve alcohol with the meal, a sauvignon blanc is recommended to complement the meal. If you know my friends and I, you know which we chose. I bought a bottle of wine from Trader Joe's with a "Santa Ynez Valley" label (that is where our two guests are getting married in three months.) We all agreed that it went beautifully with the meal.

It was a fantastic meal. After we were finished eating I tried to convince the ladies that there is a certain after-dinner Thai tradition and that's how the capital city got its name. They did not believe me.
Posted by JustinM at 12:51 PM