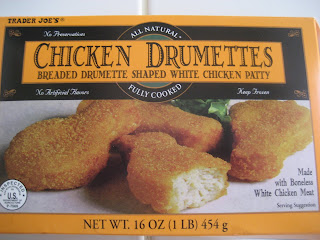 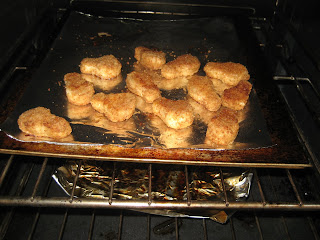 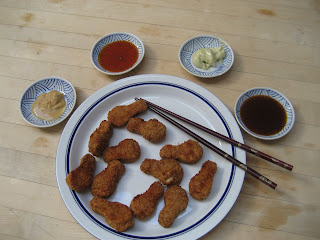 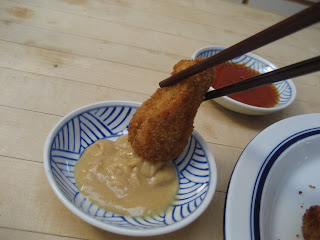 I've been eating TJ's drumettes for years. They're cheap, tasty, and really easy to make. I felt like having some drumettes today, and then, with the idea of the Shanghai McNuggets still haunting my mind, I decided to see how close I could come to replicating them with stuff from the fridge. Obviously, baking the drumettes instead of frying them isn't going to be as crispy, but I was not in the mood for frying. (Also, the drumettes are white meat chicken; back when McDonald's made the Shanghai McNuggets they used some disgusting mix of white and dark meat.)

I prepared dipping bowls of teriyaki sauce, sweet & sour sauce, and hot mustard (technically this wasn't from the fridge but rather the glove compartment of my car. Oh well.) I also had a container of wasabi mayonassie from TJ's. For a moment I considered not using it because wasabi is more of a Japanese food and thus would violate the spirit of replicating Shanghai McNuggets. Then I realized I was being a pretentious jackass. Obviously, I had to eat the chicken with chopsticks.

The meal was good, although in no way did it alleviate my longing for Shanghai McNuggets.

FYI- These have recently been removed from Trader Joe shelves to be "reformulated" as I was told because they were receiving complaints of small bones and bits in the nuggets.

how do you cook these?

In a 450 degree oven for about 15 minutes. I've pan fried them before but it's not as good.