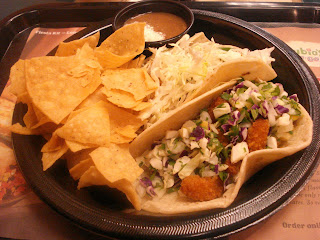 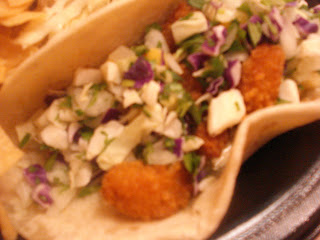 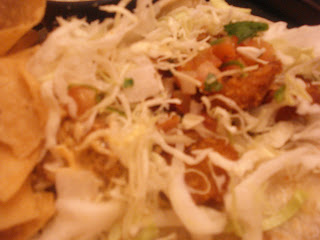 Back in October I wrote about my preference for Rubios over the rest of the fast-casual Mexican restaurants. I find Baja Fresh and Chipotle both incredibly boring (I am in the minority on this with my friends) and the rest overpriced. I don't hate any of them but I will take a taco truck or homemade burritos any day of the week.

But I'm always up for a new Rubio's promotion. Currently their crispy shrimp tacos are back. I had these once a couple years ago and loved them, so I figured I would try them again and take pictures. I got a two taco plate with one of each: original shrimp, with an ancho chili sauce and salsa, and mango shrimp with chipotle sauce and mango salsa.

The shrimp were much smaller than I remembered and there were not as many of them. The last time I tried this promotion (admittedly, that was at the Monrovia location; this one was in Riverside) the shrimp were overflowing out the taco. These tacos just had a few scattered shrimp in them. Perhaps it's a sign of the times.

They were both good, however. There wasn't a whole lot of difference between the two - since there wasn't a lot of filling they mostly took on the flavor of their respective sauces. I would say the original was slightly better, as I liked the ancho chili sauce a lot.

I probably won't have these again during the promotion, but if I do I will try out the Monrovia location to see if they put more shrimp in their tacos than the Riverside location.