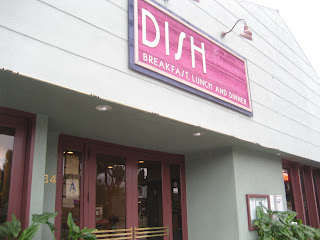 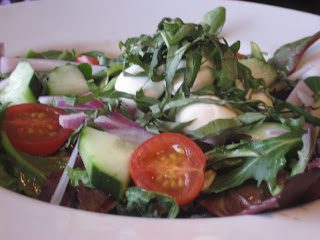 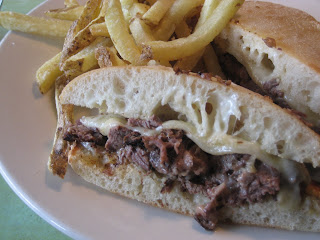 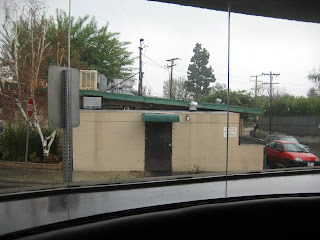 Back when I was in high school, the location where Dish is was a fine dining restaurant called Reflections. I only ate there once, before the homecoming dance one year, and I was not at all impressed. I admit, my appreciation for fine food back then was almost non-existent, but the place seemed pretentious and plain. I much preferred the year I did not have a date for homecoming and ate dinner alone at Hutch's. (Still, it was better than the year my friends and I went to dinner before prom when my broken jar was wired shut and I had to sit and watch everyone else eat dinner.)
But I had heard that Dish was a less formal place than Reflections, with less expensive and better food. It's rare that I go up to La Canada, though, and when I do I usually eat lunch at Zeke's. But the other day my friend and I decided to go up that way to buy cat food at PETCO, so we stopped in to have lunch. It is very attractive inside: high ceilings, fireplaces burning, and plenty of space between tables. We were given a booth by the windows, overlooking the back of Georgee's Pizza. Georgee's was a popular spot when I was in high school. My friends and I would often get a couple slices of pizza and play video games. (My friend Mick worked at JPL at the time and would frequently eat there as well, and although I would not meet him until five or six years after I graduated, he remembers punk kids being loud and playing video games. I was probably one of them.)
-
My friend ordered the fresh mozarella-tomato salad. It was fantastic. The mozarella was very fresh and the balsamic dressing was as good as any I have ever tasted at a restaurant. They had a pulled pork sandwich on the menu, but I decided to go with the black angus short rib sandwich with gruyere cheese. It was very good. The fries were hand cut potatoes and were decent, although they could have used a few more minutes in the fryer. We both really liked the restaurant and will be going back again. I will try the pulled pork next time.

The next day I still had half my sandwich in the fridge. I added pepperoncinis and baked it in the oven for about fifteen minutes. I put Famous Dave's Devil's Spit barbecue sauce on one half and McDonald's hot mustard sauce on the other. It was even better than the day before. 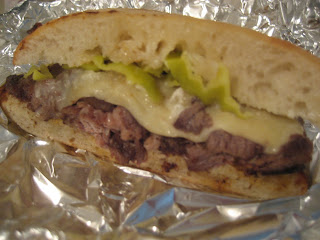 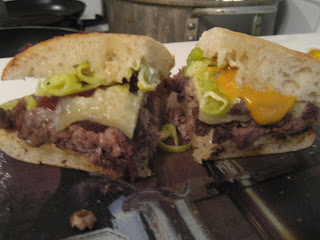