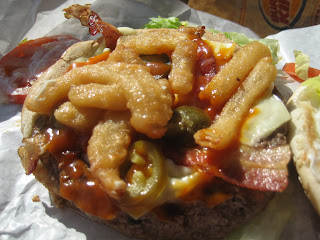 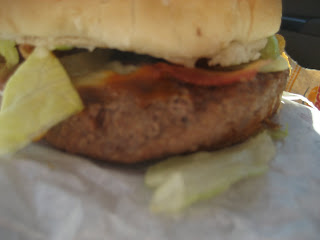 I've shared my thoughts on Burger King already: when I was a teenager I ate it frequently but now I eat it less than once every few years and I always find it terrible. But they came out with a new promotion for an "Angry" Whopper. Putting aside the silliness of the name (how the hell can a burger have an emotion?), it promised to have pepper jack cheese, "angry" sauce, "angry" onions, and jalapenos. I love spicy foods, so I had to try this, and I hoped it would be better than the Loaded Steakhouse Burger, which was probably the worst burger I have ever tried.

Thankfully, the Angry Whopper was much better. The patty was the same overcooked meat that BK always serves, but the toppings were quite good, especially the fried onion strings. The only thing is... it wasn't spicy at all. Admittedly, I have a high tolerance for spicy foods, but this was absurd. The sauce tasted more like sweet & sour sauce, the cheese had no peppers in it, and even the freaking jalapenos had no spice! How is that even possible? The Carl's Jr. Jalapeno Burger, while much worse than this, was at least spicy.

So I will not be ordering this again. It wasn't as bad as BK usually is, but I was expecting a spicy burger and this was just bland. It made me angry. Hey, wait... I just got the name!

Since I did not taste your burger, I will take your word for it that it was spicy. I'm glad you love it. My burger was bland. I'm not sure how you know it wasn't.