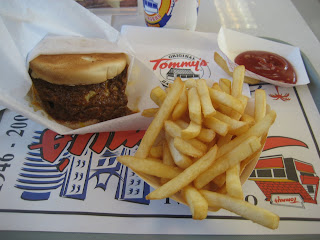 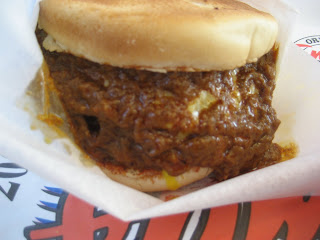 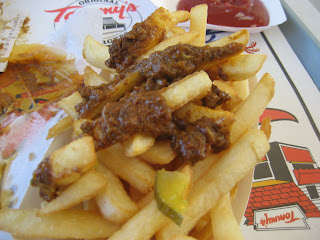 Chili is another in the long list of things I foolishly did not like as a kid. I have never liked beans, and chili always seemed to have beans in it. I did not allow for the possibility that chili without beans could actually be any good.

When I was a senior in high school, my buddy David and I would go to Hutch's about once a week for lunch and bring the food back to campus. One day we were eating our burgers, trying to make everyone else jealous (which, of course, we did) when my buddy Dan, who had gone to Tommy's for lunch, offered to trade half his burger for half of mine. "No thanks," I said, "I don't like chili."

"These are awesome," he said.

"There are no beans; this is an all-meat chili."

So I took him up on the offer. It was one of those culinary moments when I realized just what I had been missing all along, like the time I finally tried cilantro or an onion ring. (Before that, I used to just pull the onions out and eat the breading.) I started going to the Tommy's in Eagle Rock every couple weeks for the next year.

Eventually I got tired of it. Tommy's chili isn't the best around - I like Wolfe Burger's and Tops' chili much more - and the Eagle Rock location became less convenient. A few years ago they opened a location in Pasadena, but it's just not the same. Instead of being a shack with a small, fast-moving drive-thru (like the best Tommy's,) it looks more like an In-n-Out. And, thanks to some silly rule that an employee told me was a Pasadena regulation, they don't have a speaker box to order at; you have to order at one window and pick up your food at another, which makes the line move much slower.

But still, every once in a while I am craving a chili burger and nothing will do but Tommy's. The other day I was in such a mood. You can get a combo with one, two, or three patties, all drenched in chili, and you can even order chili and cheese on your fries as well. I have certainly done this before, late at night, but I must say it's not advisable for lunch if you're going to run into anyone else for the rest of the day. That's a lot of chili. (As Jonathan Gold put it in so succinctly in his review: "Eating a Tommyburger is an aggressive act.")

So I ordered the combo of a hamburger with chili and regular fries and a drink. I always ask for extra pickles on my burger to give it some additional crunch. (Pickles being another thing I used to hate but are now indispensable on almost every sandwich I eat.) You can also order additional chili on the burger for no charge, but I have never done that. I cannot imagine how messy the burger would become with extra chili. As you can see in the last picture, as long as you hold your burger over the fries when you eat it, you can get plenty of chili on them.

I love the lunch burger but have always wondered about their breakfast burger. A fried egg can add wonderment to just about anything.