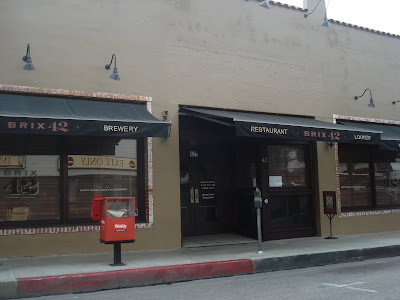 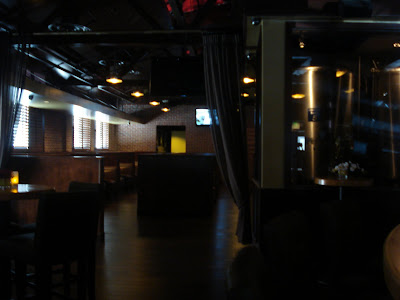 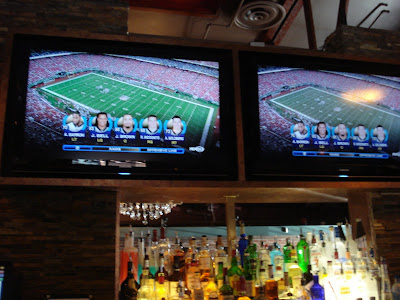 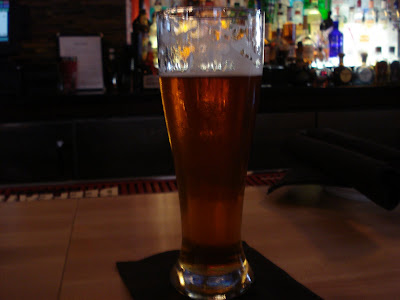 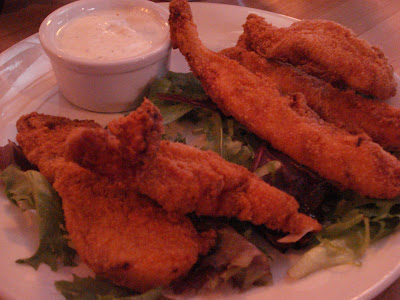 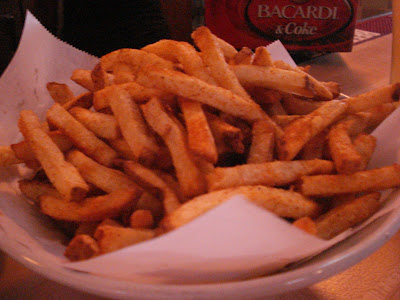 I've been around Pasadena long enough to see the space at 42 South DeLacey change businesses more frequently than Law & Order changes cast members. The "change of ownership" sign is pretty much a permanent fixture. In the last decade I can think of 6 restaurants in that space (Jerry's Famous Deli, Pause, Pasadena Brewing Company, Union Cattle Company, Dena House, and now Brix 42; it's possible there are some I'm forgetting.) The atrocious Clippers have had the same number of head coaches in that time period. Although, Mike Dunleavy seems like he will be around for while. Brix 42 does not.
-
I went in to Brix 42 a few months ago, not long after they opened. The place is definitely attractive: dark wood, large booths, and flat screen TVs in the bar area. I only had one beer that evening and did not think much of it. I wasn't hungry but the happy hour menu looked great: meatballs, ale-basted sausage, sliders, fries, and several other things, all offered at half price. I kept it in mind to come back and try some food. Late Friday afternoon, Elizabeth and I ducked in for a while.
-
The first not-good sign: there were more employees than customers at 5:30 on a summer Friday. We sat at the bar and the female bartender was very friendly. She recommended a couple beers and gave us a menu. The second not-good sign: there is no longer a happy hour menu. (I overheard the bartender tell the people next to us that they had just removed it the day before.) We were given a "late night menu" with several items on it. I guess that now passes for their happy hour menu, too. All of the items were $7. There is no longer any half-price food and there were none of the things that I wanted to try. No meatballs, no sausage, no sliders. But we were hungry so we ordered some of their "Cajun" fries and chicken strips.
-
We drank our beers while we waited for the food. They were much better than the beer I'd had a couple months earlier. I had an IPA and Elizabeth had a Hefeweizen. The Hefeweizen avoided the overly-sweet flavor that I dislike about Hefs. My IPA would never be mistaken for Bear Republic Racer 5 or Deschutes Inversion, but it was better than anything Gordon Biersch or Pasadena Brewing Company ever turned out. Fortunately the beers are still discounted for happy hour, and they were well worth their $3 cost.
-
The food did not take long to arrive. The chicken strips were lousy: skimpy pieces of chicken that were too tough in many places. These were not worth one dollar, let alone seven. The fries, however, were absolutely fantastic and worth every penny. They were perfectly cooked, probably double-fried. You can't tell from the picture but they were served in a massive bowl. Even though we were both hungry and ate a lot of fries, we couldn't finish the order. A table about 30 feet away got a bowl of garlic fries. Ours were great; those smelled better. Other than Green Street Tavern, which is much more formal, these are the best fries I have had in Pasadena since the ephemeral Breadcrumbs, whose fries were so damn good they even served them on pizza.
-
It's tempting to return to Brix 42 to try those garlic fries, but I don't think I will. It's nice inside and, as I mentioned, the bartender was friendly. But it's very disappointing that they have not only stopped serving a happy hour menu, but reduced the regular menu as well. (Looking on their website, it appears they have removed the pizzas, which I'd heard were good, and quite a few other items, to the point that they only have five entrees listed.) If they still offered half-price appetizers at happy hour, I would return and try a few of them. It's surprising and not a good sign that they would scale back their menu so much and eradicate their happy hour food menu after only five months. But then again, considering the location, nothing is surprising.
Posted by JustinM at 10:17 AM

Sorry I missed you that afternoon. Looks like there was plenty of room!

Just two comments:
1. Thanks for mentioning Breadcrumbs. I have been trying to remember the name of that place for weeks!

2. Inversion is good, but Racer 5 is incredible. Just had it for the first time while we were up in SF a couple months ago...lots of bars have it on tap there. It is easily my favorite IPA now.

Will try to stop by this weekend.
bt

No need for the initials, I knew who you were the second I saw "Kodo and Podo."

I am glad to hear you are a fan of the Racer 5. It don't think I have ever had a better IPA. Many people are passionate about Dogfish Head's IPA, but I had that in New York once and, although it was good, I did not think it was close to the Racer. Once that was on the menu at the pub and I excitedly ordered one, only to be told that was a mistake and they meant to write "Red Rocket." I was crushed. Ok, maybe not crushed, but disappointed.