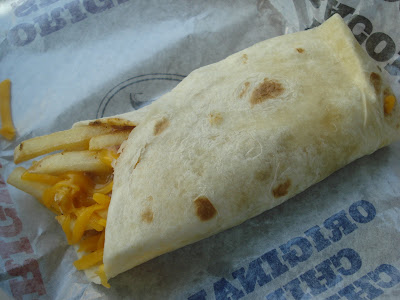 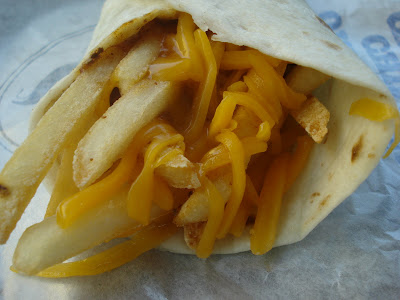 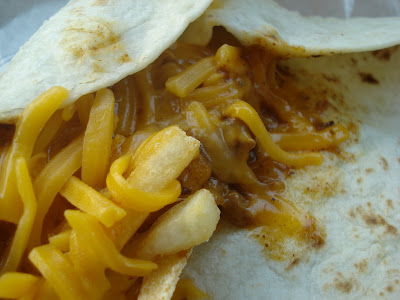 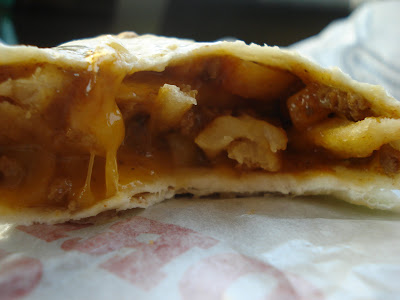 These are interesting times for fast food. There is so much of a race to put out value menus and great deals that some of the things that are released are quite bizarre. Some of the classics are very good. Wendy's 99 cent chicken nuggets come to mind. Some of them are bad, like KFC's Snackers. Taco Bell offers a "cheesy double beef burrito" that doesn't look like it contains cheese or beef.

Now Wienershcnitzel has a value menu with six items, like the traditional hot dog, corn dog, and chili burger. But the item that caught my attention was the chili cheese fries burrito. I have had chili cheese fries many, many times in my life, and never once I have I thought 'Hmm, these are good, but you know what would be great? If they were wrapped inside a tortilla.'

But they're only 99 cents, and I figured my legion of readers (all six of you) would like to see pictures of it. Plus it would give me an excuse to eat some Wienerschnitzel mini corn dogs, one of my favorite vices. I headed down to the Wienerschnitzel in Alhambra. There were a lot of cars going through the drive-through, including two police cars, but only three people in line at the window, so I got out of my car and walked up and placed my order. I should have used the drive-through. At least 15 cars were served while we all waited around for our food. The place was not exactly run like a Thomas Keller kitchen.

Still, it was a nice day out and I chatted with a couple of the guys in line about baseball for the fifteen or more minutes we waited. I was wearing an Angels hat; they were Dodgers fans and wanted to know if I thought there was any chance of an Angels-Dodgers World Series. (My answer? No.) I got my food, sat at a table and unwrapped it.

It was smaller than I expected. I don't know what the hell I could have been expecting for 99 cents, but then again I'm not the sharpest. It also wasn't very hot. A few months ago I had the Angus Chipotle Chili Dog at Wienerschnitzel and the chili was scorching. I was expecting something similar, or at least something that would melt the cheese faster. Still, I took a bite and it was... damn good. I did not see that coming. The chili was very tasty, the fries were crisp and salty, and the tortilla was fresh.

Unlike pretty much every fast food item I try, I could see myself eating this again. I still can't get myself to try Wienerschnitzel's "Sea Dog," though - Alaskan pollock with lettuce and tartar sauce on a hot dog bun. That just seems wrong.
Posted by JustinM at 11:13 AM

Funny, I saw that in an ad the other day and immediately thought we should try that. Assuming I liked cheese.

I could be completely off base, but doesn't Ricks (or whatever the burger joint on Marengo & Walnut is called) serve up a "Spudarito" (sp)? I had one once while in a fog, and I seem to recall it consisted of fries, a hot sauce of sorts, cheese, and most importantly, a tor-till-a. Please confirm or correct so I can refocus my energies on something more productive today.

You are correct. Rick's (El Molino & Walnut, but close enough) has the spuderito, an epic concoction that is to the Wienerschnitzel chili cheese fries burrito what a 1967 Shelby is to my dad's Smart car. The formers are beautiful things that impress everyone. The latters are cute and fun but nothing spectacular. And they're full of dog hair inside.

I have not had a spuderito since I was 18. I'm not sure if I've even burned off the calories from it yet. I suppose if a majority (in other words, 4) of you want to see me do a post on that, I will.

7 readers! I don't even remember when I started reading, or how I ended up here, but it's my favorite food blog for some reason. Even more favorite than pioneer woman and bakerella! And that's saying a lot.
I'm in the majority who wants to see a spuderito post, too. Because I have no idea what that is. (I'm in RI and haven't heard of half the places you go to!)

I always figured I would be huge with the Pioneer Woman and Bakerella demographic.

I would love to do a post on someplace in Rhode Island for you but the only time I ever went there (as opposed to driving through) was to some pro wrestling event in Providence. I was a teenager and not too bright. So no food pictures. Yet.

You should try some better fries like carne asada fries or some pepe's chili cheese fries + carne asada, head over to tc!

I love reading you blog as well, I read from work so I cannot subscribe or follow so I check your blog at least once a day to see if you have posted.

Oh man, Cicinnati too? I can't do any post on food there because that's one of the only big cities in the country I haven't been to. I've been to Cleveland and Columbus a couple times, but never Cincinnati.

One of my best friends is a die hard Reds fan and he goes back for Opening Day every couple years, but I haven't made the trip with him.

I need to take a road trip soon. I need to branch out from Southern California food for a bit.

Anthony - I really liked the fries both times, but the chili cheese fries by themself were drowned in a really runny sauce. It was probaly the most watery chili sauce I have ever tried. But in the burrito there was less chili and it was less runny.

I have never had Pepe's chili cheese fries. That will go on the short list.

Here's a vote from South Pas for a spuderito post. Spuderitos are the awesomest thing ever when one is not sober.

Yes, let's have a written tribute to the spuderito... for some magical reason, in times of non-sobriety, a spuderito manages to combine the satisfying quality of a cheap fastfood meal with the stomach settling ability of a Tums... why is that O' wise one?

All these references to not being sober... is there a breathalyzer they give you and they won't serve you if you're sober? I was going to go there for lunch tomorrow. I didn't actually plan to be drunk then. I mean, I guess I can be, I just hadn't planned to.