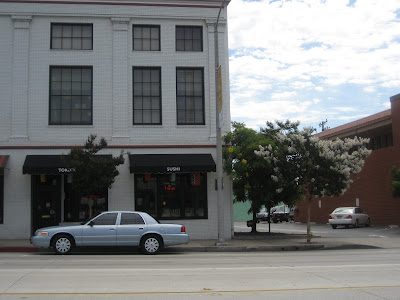 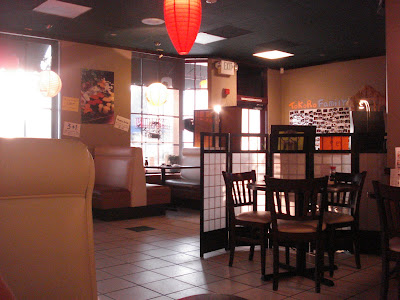 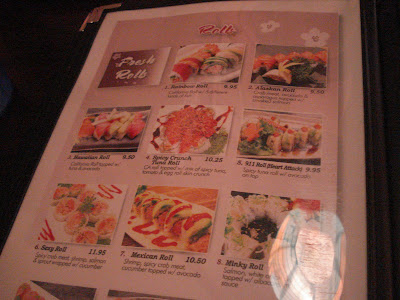 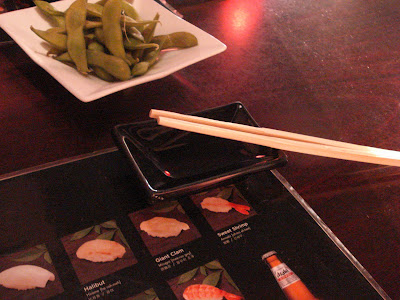 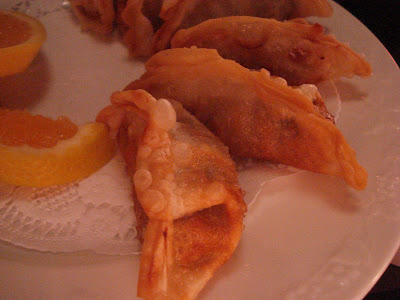 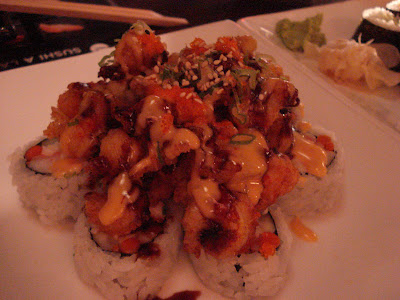 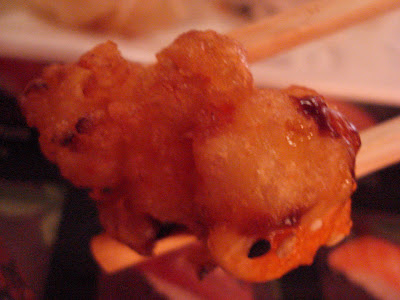 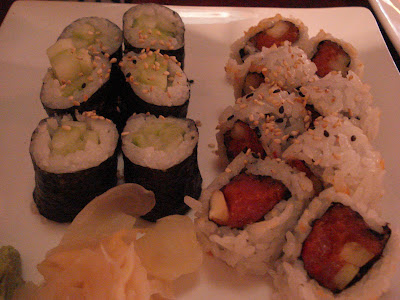 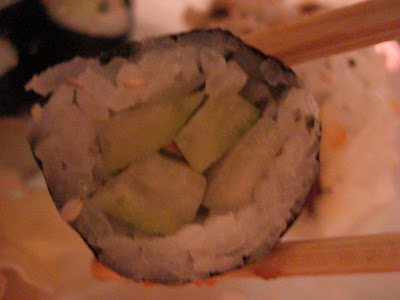 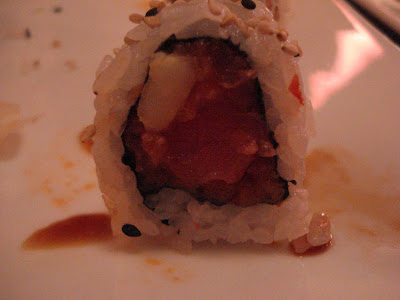 (Note: The quality of these photographs is not good. I used the high sensitivity/no flash feature on my camera. It looks in the second picture that the restaurant is empty and very light inside. And, at the point I took that picture, it was both. But for almost all of the meal the place was packed and the shades were drawn. There is no way I will ever use flash photography in a dark, crowded restaurant, so I took these admittedly not great photos.)

The other night, Elizabeth and I were trying to come up with a dinner plan and she suggested sushi. I had no desire to go up to Old Town, and the last time we tried a new place, Ai, I wasn't very impressed. We went online and looked at menus at a couple of places we'd never been and settled on Tokoro.

It was packed when we walked in. There were a couple tables open but we still stood around for a few minutes while several of the people working there glanced at us but ignored us. (Why is it always Japanese places where this happens? I've never been to Japan, but when you go into a restaurant there do you have to stand around for several minutes without being greeted?) Eventually someone deigned to seat us. I ordered an iced tea, Elizabeth had a hot saki.

There were several menu pages with color photographs. I ignored Charles Kuralt's maxim never to eat in a restaurant with photos of the food on the menu, because several of the things looked very good.

We started with an order of Gyoza. They were good, although no different from Tani, or Maki & Sushi, or probably any other Japanese place I have been recently. As long as these places serve gyoza that are straight out of the fryer I will enjoy them, and these definitely were.

We got an order of popcorn lobster: battered and fried pieces of lobster (or more likely langostine) on top of a crab roll, with a spicy sauce. They were very good. Nowhere near as good as the popcorn lobster at Tani, but we ate every bit of it and I would not hesitate to order it again.

We ordered two sushi rolls: cucumber and spicy tuna. The cucumber roll was very fresh. I have to say I have certainly changed my opinion on cucumbers in the last few months. I have never cared for them; their sweetness has always made me cringe a little. But after having had several cucumber rolls with Elizabeth - not to mention the cucumber water we had at Wurstkuche, perhaps the most refreshing water I have ever tasted - I enjoy them a little bit now. I probably would never order a cucumber roll without her, but I do not hesitate to eat some when she gets one.

The spicy tuna roll was one of the best I have ever had. It's a measure of how bland I consider most spicy tuna rolls to be that I was pleasantly surprised that this one was actually, you know, spicy. We briefly considered ordering another one, but knew that in a few minutes we would be hit with that "Oh my God, I'm full" feeling that often happens when you don't realize how much sushi you have eaten until after the fact.

The service was very poor. Well, perhaps I should say more accurately, our sever was not good. She seemed lost in a world of her own. There was one waiter who was doing all the work. We've all seen that before: sometimes one server is not only handling his or her tables, but dropping off food and filling requests for all the other tables. That's what was going on here. This guy was working his butt off, seemingly handling every table in the house, while our server just did laps around the restaurant with a blank look on her face, not making eye contact with any of "her" tables. From the time we were ready to pay, it took about 15 minutes to get our check, and that's only because I called out to her when she walked by on one of her laps.

I will definitely go back to Tokoro. There are a lot of things on their menu that I would like to try. They have a $19.95 all-you-can-eat lunch deal that, while not seeming like a good idea, is something I might have to try one of these days.
Posted by JustinM at 12:54 PM