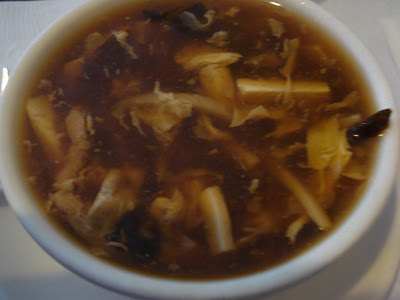 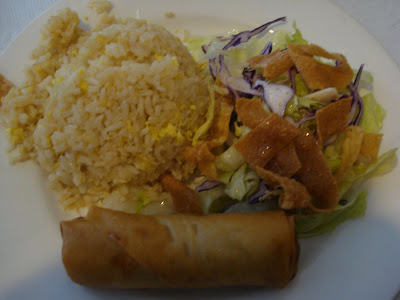 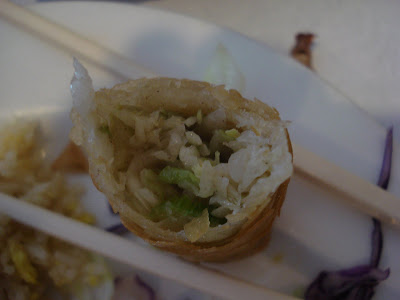 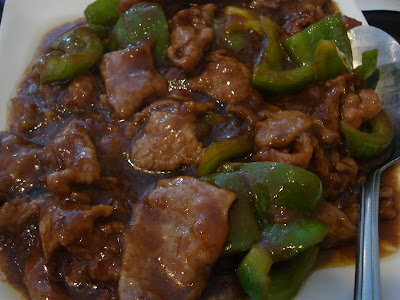 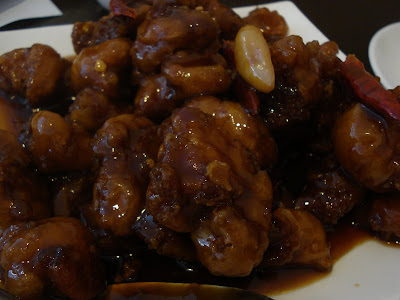 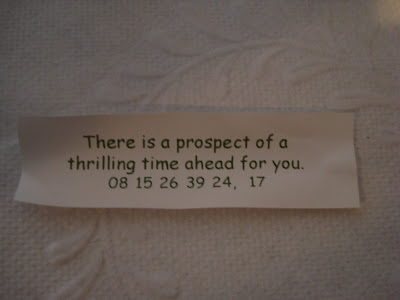 I first wrote about Golden China in early March. My friend Les had raved about it to me - it's only 5 blocks from my house - and, although I had never been there or even noticed it, I went soon after for dinner. It was great. Les was happy that I liked it but told me that the best part about the place was the lunch special. I made a note to try it one day but never got around to it.

Yesterday, while running a bunch of errands, I was trying to decided what to do for lunch.We had gone up to the Target "Greatland" in Burbank because the Target in Alhambra was an absolute pigsty. A girl had knocked into Elizabeth and then bumped into me, and instead of apologizing, she barely looked at us before talking loudly with her mom about how they could shoplift some of the expensive hair care products. Sometimes I really hate people.

I did not feel like anything time-consuming or expensive, so when Elizabeth said she needed to stop by Vons, I suggested we get lunch at Golden China. This was after 2PM so I was expecting a sparse dining room. It was packed. There were about two tables open. We were seated at the only available booth and we opened the menus to the lunch specials. The most expensive thing on the lunch menu was $6.85. (I believe that was the shrimp with lobster sauce, but I am not positive.) All lunch items are served with hot tea, soup, salad, an egg roll, and rice.

We each selected the hot & sour soup. (Egg flower soup is also available.) It was outstanding, much better than the Panda Inn soup I had eaten the week before. It was also very spicy, especially when you got down to the bottom of the cup. It cleared both of our sinuses.

The other sides items all arrived. Just like our dinner there a few months ago, the food was all out within five minutes. I ordered the fried rice while Elizabeth got steamed. It was the best fried rice I have had in a long time. There was no discernible oil and it tasted like it had just been cooked. The egg roll was also great, very light and crisp, or at least as light as a fried roll can be. The vegetables inside were awesome. Next time I go to Golden China I might get an order of egg rolls. The salad was good, but not as good as Panda's. The dressing was very mild and the salad did not stand out at all.

I was curious why they hadn't just put our entree meats on the plates with the side dishes; I thought there was enough room. Then I entrees arrived and I realized why: these were massive portions. They would barely have fit on the plates even if the plates were empty. I cannot remember ever ordering a lunch special and receiving this much food.

The orange chicken was good, it was in a subdued sauce without the huge amounts of sugar that some places use. The chicken had been fried a little too long. It was still good, but it could have been better. The pepper steak was very good. The beef was tender and the sauce had a nice balance of garlic and pepper. The chunks of bell pepper were fresh.

We ate about half the orange chicken and a third of the steak and we were stuffed. We got two boxes to take the leftovers with us. Neither of the dishes were as good as the house special beef we had on our previous trip, sauteed with tangerine and perfectly crispy. But that wasn't available on the lunch menu. We were still quite happy with everything we had. And the best part? The meal for the two of us was exactly $13.

After we got home we texted our friend Tracie to ask if we could borrow her fancy vacuum. She brought it over and remarked that she was hungry and going out to get some food. I offered her Chinese food and she fixed herself a plate of our leftovers. And we still had more than enough left to snack on in the evening. So we had lunch for three people and snacks for two for $13. I will certainly be going back soon to try some of the other items on their lunch menu.
Posted by JustinM at 11:32 AM