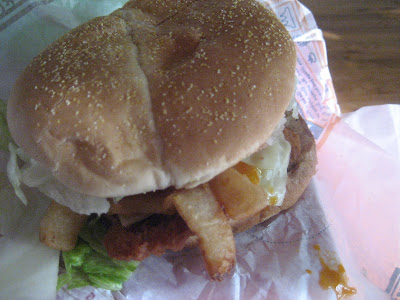 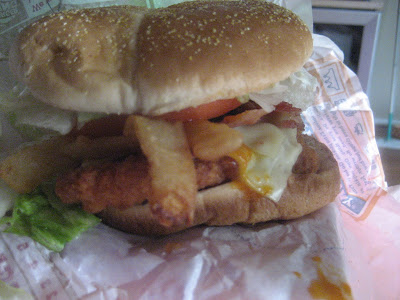 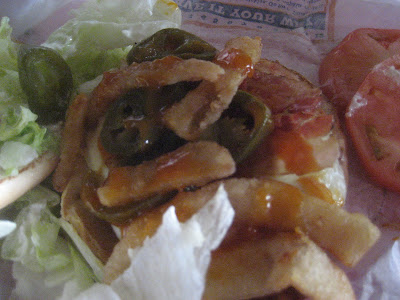 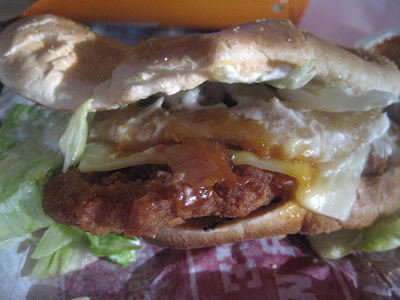 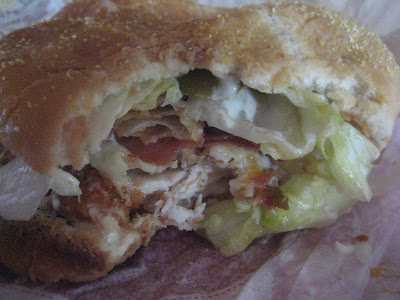 One night in my early 20s, while making dinner with my friends Tom and Zach, I made a comment that "everything fried is good." That was all the challenge those two jackasses needed, and they set about taking pretty much everything out of the fridge that they could and mashing it into a giant ball: chicken, bacon, pickles, cheese, carrots, etc. I think they put potato chips in it. Gummi Bears, too.
-
The end result was something only slightly smaller than a medicine ball. It looked like all the contents of the fridge had been crushed in a car compactor. And then they breaded it and fried it, topping it with a remoulade sauce I had made a couple days earlier for a Mardi Gras meal. I ate it, of course, otherwise I would have had to admit I was wrong and that maybe not everything is good when fried. I don't know how many calories it was, but it's safe to assume it was the most unhealthy meal I have ever eaten.
-
Until now.
-
Burger King, in their never-ending quest to make jaw-droppingly unhealthy food, released the Angry Tendercrisp: 1030 calories, 61 grams of fat, and 2670 milligrams of sodium. (It is recommended not to exceed 2400 milligrams of sodium in an entire day.) Obviously, I had to try one.
-
I tried the Angry Whopper back in January after quite a while of anticipation. (An acquaintance of mine did some work on a commercial for it and had told me about it long before Burger King started advertising it.) It was tremendous letdown. Well, maybe "tremendous" is too strong a word. It was as much of a letdown as a hamburger from my least favorite fast food chain can be. It's not like it ruined my weekend. It's just a hamburger; I didn't really care.
-
So I wasn't expecting much from the Angry Tendercrisp. But it was much better than the Whopper. As I have written many times, though, I just don't think BK's burgers are any good. What I was most disappointed in with the Whopper was the fact that it wasn't spicy at all. The Tendercrisp is no different: the sauce has a tiny amount of bite but nothing more than that. And even the jalapenos are bland, which I can't explain. The chicken was pretty good, though.
-
I tried this sandwich so I could put it on the blog, but I will never eat one again. A chicken sandwich containing more than 1000 calories had better be damn good. This was not.
Posted by JustinM at 1:32 PM

It doesn't look good either.