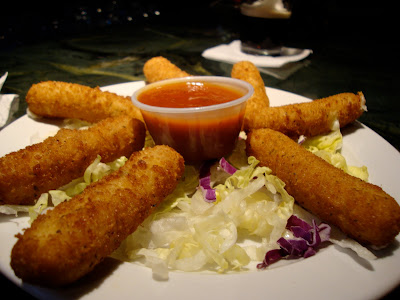 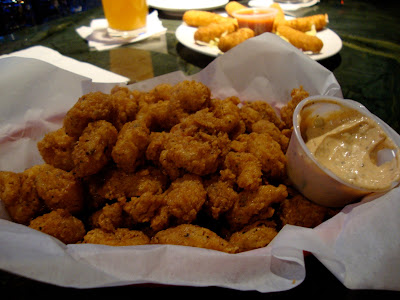 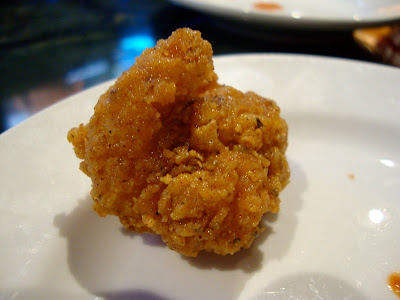 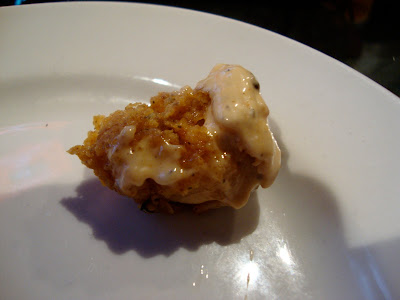 18 days short of a year ago - man, time is going by too quickly - I wrote about Dullahan's, a much improved incarnation of McMurphy's, a hellhole of a bar that I sometimes reluctantly visited in my early 20s, and which my female friends referred to as "McRoofie's" with an unsettlingly small amount of sarcasm. Dullahan's cleaned the place up, added the best selection of TVs in Old Town, and offered a great happy hour as well.

A few months ago the name changed to 72 North (their address on Fair Oaks), partly due to a change in ownership (and, although this is purely speculation on my part, perhaps to have a name much less similar to McMurphy's). But everything else is almost the same, the only difference being an improvement in some of the menu items.

Saturday night, Elizabeth and I felt like having a couple drinks and just relaxing. We didn't need anything fancy like wine or gourmet food, just some cold beer and music. We met up with our friend Carla and had a few pints of Guinness (my drink of choice in most places, and always at 72 North; they have my favorite pint in OT) and Blue Moon. After an hour or so we needed some snacks. In January a few friends and I met up here to eat pizza, but we weren't in a pizza mood this evening. We decided to get a couple appetizers and if we were still hungry, order more.

Elizabeth immediately suggested the fried cheese. I saw that coming. That girl loves fried cheese like a sailor loves his rum. I had never had the fried cheese here, but I was willing to give it a shot. We debated what else to get. My friend Dave once told me that the popcorn shrimp were very good, so in the end we decided to give that a try.

The food was ready in only a few minutes. The fried cheese was good, although it was the same fried cheese that almost all restaurants and bars use. There are only two ways to screw it up: not cook it long enough so that the middle is frozen hard, or cook it too long so that the insides have busted out on to the plate and you're left eating a hollow tube of greasy bread crumbs. This fried cheese was the ideal temperature.

The popcorn shrimp were excellent - crispy and a little bit greasy. We ate the entire basket, even the little fried bits that were left over. The star of the show was the spicy remoulade. They gave us a small container of it, which we devoured with about a half dozen shrimp, before we requested a larger amount of it. This sauce was comparable to the spicy chili mayo at Zeke's Smokehouse, and we considered ordering some more appetizers just so we could eat more of it. (I believe getting a couple spoons and eating the sauce by itself was suggested.)

I sent my friend Dave a text telling him that I'd finally tried the popcorn shrimp. It turned out he and two friends were having dinner right next door at Mezbaan, and not long after my text he showed up. Maybe he just wanted to have a beer and hang out, but it's possible he was hoping there were some shrimp left. I will definitely be trying these again.
Posted by JustinM at 10:21 AM

Hmm, that mozzarella stick looks like it's two feet across! If only that were true. Cheesy goodness...

I wonder what the largest size possible is to make piece of fried cheese. Could I assemble a foot-long piece and cook it in my turkey fryer? I think this is something I need to explore one of these days.

How would you compare the shrimps to other places?

I don't eat popcorn shrimp nearly as much as I used to. Bubba Gump has great popcorn shrimp but that's not a Pasadena location. A decade ago Cheesecake Factory did, but I have not been there in years so I have no idea if they're still on the menu. Also, years ago I had an appetizer of popcorn shrimp at McCormick & Schmick's that was outstanding, but the last couple times I went there (which spans the last five years) they were not on the menu and the waiter had never heard of them.

I really liked the shrimp, especially for a bar option. And of course, I love all fried cheese.

In the scores of places I have eaten fried cheese I have only once come across an order that was bad - at Barney's Beanery in OT. A few years back Rebecca and I were there and we decided to split some fried cheese to soak up the Turbodog. We both thought it was terrible. "How the hell can you screw up fried cheese?" we asked. Of course, after eating a couple more meals at Barney's over the years, I realized that they screw up all their food....