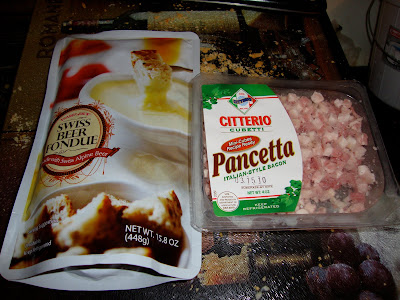 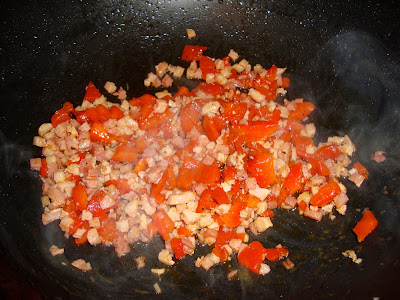 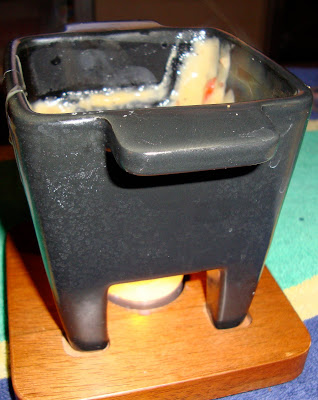 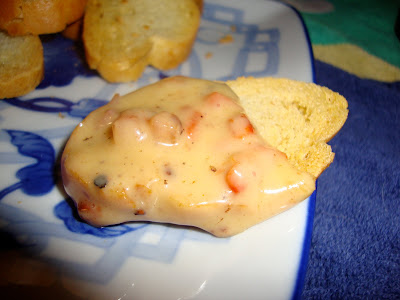 I've always liked fondue. When I was a kid and an incredibly picky eater, I always was willing to eat a giant pot of cheese and wine. But I have not eaten it very much in the last few years. My friend Tracie and I had dinner at The Melting Pot three years ago, and it was a nice dinner, but it was almost two hundred dollars for the two of us. It wasn't that nice of a dinner. So I never really felt like going back there, and I never had the desire to go through the process of making it at home.
Not long ago, however, I discovered Trader Joe's Swiss Beer Fondue. It is delicious, and, like many things at TJ's, it's almost ridiculous how affordable it is. A one pound bag - which Elizabeth and I have never come close to finishing - is $4.99. The other night Tracie and our friend Murph were over, so I decided to make fondue.
I'd had pancetta in the fridge for a few days; Elizabeth makes a great pasta with fried pancetta and spinach, but we just hadn't gotten around to having it. So I decided to cook it. There was also a red pepper, so I roasted that and chopped it up into small bits and cooked it along with the pancetta. After about ten minutes I added the package of cheese. It could not have been any easier.
About a year ago there was a big sale at Bristol Farms and I bought a mini fondue pot for ten bucks. It's quite small and has to be refilled frequently, but it's cute. We decided to do this informally; I put a beach towel on the coffee table and we all gathered around, watching Anthony Bourdain and Family Guy and dipping sliced pieces of baguette into the cheese fondue. Was it the best fondue I have ever had? No, probably not. But it was still delicious and easy and this dinner for four people cost less than ten bucks.
Posted by JustinM at 1:51 PM

This is as good as any restaurant fondue I have had. I love it with portabella mushrooms.

That looks awesome, Justin. I'm going to stop by TJs this week and try that out!

My fiance and I made this for the first time on New Years Eve...it was a HUGE hit!! It goes perfectly with TJ's Beer Bread Mix which is also super easy to make. We didn't add anything to the cheese that night, just dipped pieces of the beer bread into the swiss beer cheese until we were scraping the bottom of the fondue pot haha. We'll have to try it with some of your suggestions! :) Does TJ's still currently carry it??

Good to know. I usually don't add anything to it, but since it was a last minute thing to have a couple friends over for dinner, I added those to the fondue to make it last longer. I've never done that before. TJ's still carries it as recently as two weeks ago.

Just tried this and it was great. Thanks for the tip!

No problem, I'm glad you liked it.