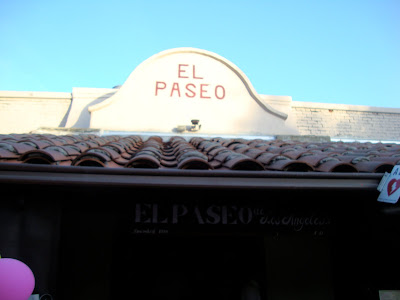 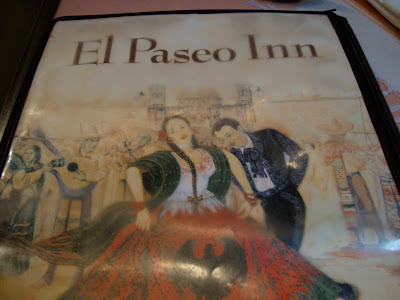 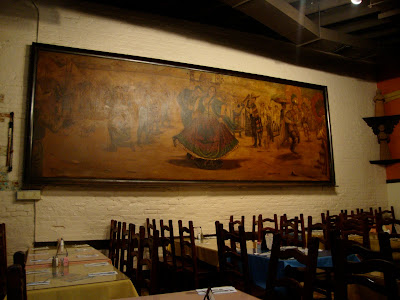 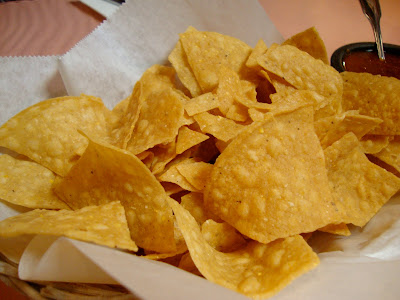 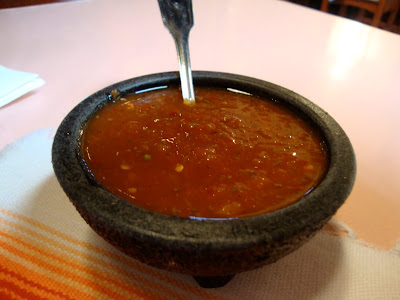 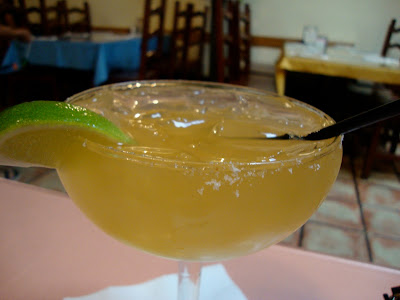 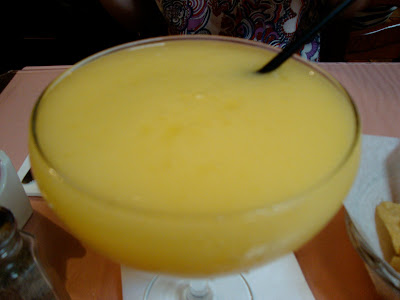 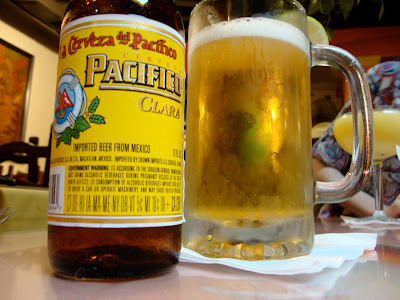 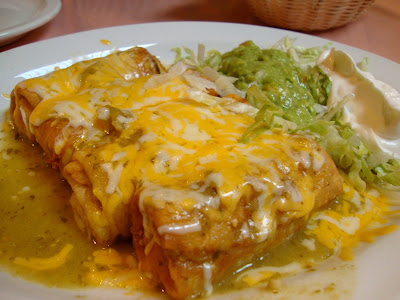 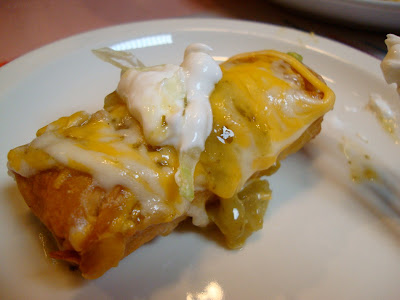 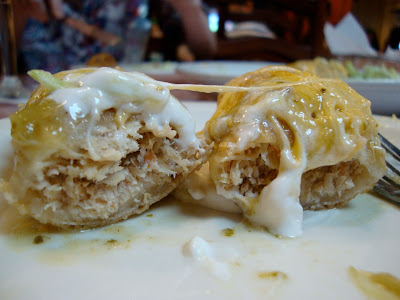 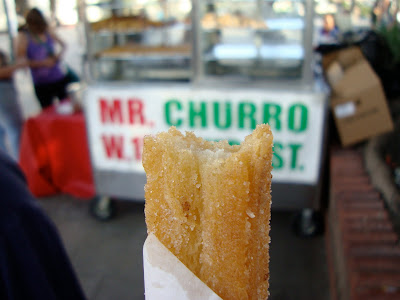 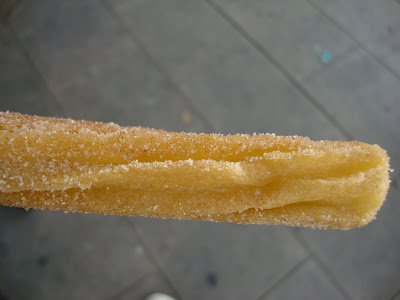 When Elizabeth's sisters were here visiting last September, we took them down to Olvera Street one afternoon. It was the perfect afternoon for the place: very hot and not too crowded. We finished off a couple hours of shopping - Dawn bought a "Los Doyers" t-shirt and Kate bought a painting of a large naked woman - with some cold drinks on the patio of one of the cantinas.
Dawn, who is getting married in July, recently decided there is something she saw on that trip that she would like to be a part of her wedding. (I'm not supposed to say what, on the off chance that one of my seven readers might somehow be at the wedding, and thus the surprise would be ruined.)
So Elizabeth and I headed down to Olvera Street to see if we could pick up this particular thing. We took our friend Carla with us, who had not been there in years. After the shopping, we stopped into El Paseo Inn for a snack. We started with chips and salsa, which were great. There are very few things in life that I find more addicting than tortilla chips when they're fresh out of the fryer. Elizabeth ordered a peach margarita and I opted for a Pacifico (I've never been a margarita fan). Carla asked the waitress's advice and ended up getting a Cadillac Margarita.
The patio was crowded so we sat inside. This did not bother me; I love the inside of this building. Unfortunately, three kids were raising hell - running around the place at full speed, swinging toys on the end of strings, and climbing on the vacant tables, throwing the clean silverware at each other. A table full of women sat nearby but I could not tell if the kids belonged to the women, as they made no effort to stop the kids' activities. Eventually they got up to leave - and sure enough, the kids did belong to them. F**k, I hate people sometimes.
We ordered some chimichangas - flour tortillas stuffed with chicken and spices, rolled, and covered with tons of cheese and green salsa. These were absolutely delicious, like the flautas we'd had at Casa del Rey, only the exact opposite. We were thinking about getting another appetizer but instead decided to have a churro.
We left El Paseo and walked down to a churro cart. Churros might be one of the things that are more addictive than fresh tortilla chips. These were fantastic. Some people were getting their churros filled with caramel or creme, but we opted to eat them plain. I could have eaten at least five of these.
I really like Olvera Street. Yes, it's usually crowded and it's pretty much a tourist trap. In half a dozen trips there over the last few years, I have yet to see one item in any of the stores that I would like to own. But there is a certain charm to the place: it may be dirty and cramped, but it's ours, you know? The oldest existing house in Los Angeles is there, built in 1818 - the equivalent of something 500 years old on the East Coast.
Afterwards we walked over to Union Station to catch the Gold Line home. This is one of my favorite buildings in Los Angeles, and we stopped at the Traxx bar to have a beer before we left. 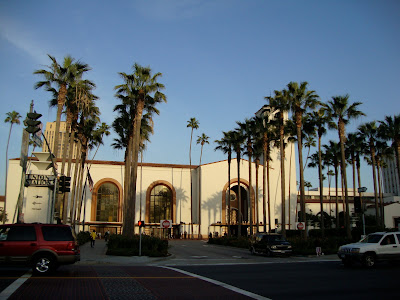 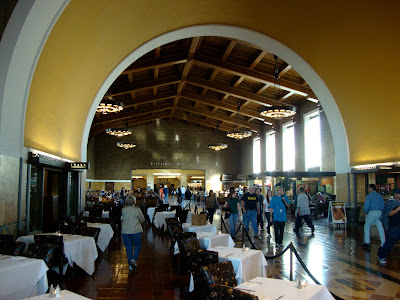 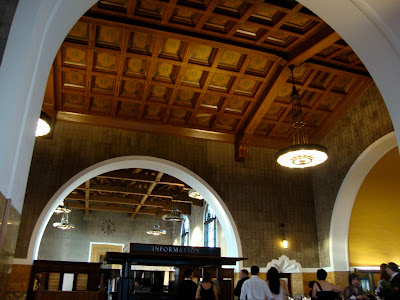 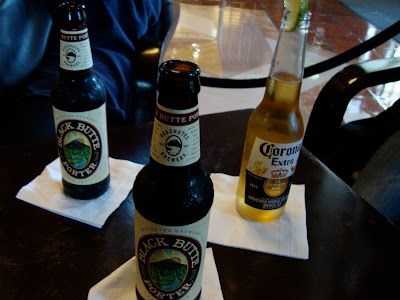 Those weren't kids running around the room at full speed - they were Toyotas.
Churros get a bad rap because of all of the crappy ones served at ball parks, etc. but when they're good, they're great. Sabor in Valencia serves 'em fresh, filled with Nutello - a seemingly odd combination. For these I crave.
Traxx is one of the better people-watching spots in L. A., the experience enhanced, as are all, by yummy ale.

I once had a churro at Costco that (literally) could have been used to bang a drum or (not quite literally) stop a charging rhino.

Hi!
I enjoy reading your blog!!! I love me some good LA Mexican food!!!
I'm a sucker for great architecture, I've been to LA several times, but have never been to Union Station, I'll have to check it out when I'm there again.

Thanks! I don't know much about architecture, but I know what I like. Some of Union Station is Mission Revival style, which I love. I remember a little over a decade ago they were talking about building an NFL stadium in Carson and one proposal utilized that style, which looked really nice. But then people realized USC was enough professional football for this town and the idea passed.

I just wanted to say that I enjoy your blog as well so now you have 8 readers, you always take very good pictures. Do you ever eat around the Palmdale area and if so do you have any recommendations, I just moved here for work. Also, I bought some langostino at Trader Joe's and was wondering if you had another way you like to prepare them other than as a salad. Cheers and keep up the good eating.

Thanks Angie. I guess I'm slowly building the empire. Very slowly. I do not know the Palmdale area very well. The only restaurant that comes to mind is Famous Dave's - which isn't bad, but nothing I would strongly recommend.

My favorite thing to do with the TJ's langostino is make pseudo-lobster rolls. Like these!

Good god, I freakin' love that train station. It's cooler and prettier than any I've seen in Europe and it's ours.

That looks tasty, I will try to make that sometime this week, I will let you know if I did your recipe justice...I wish I lived closer to Slaw Dogs, but it's probably better for my waistline that I dont.

Nice pictures. What kind of camera do you use?

Thanks. Nothing too fancy: a little point-and-shoot Sony Cyber-shot. For years I used a Canon PowerShot, which was great for outdoor pictures and very user friendly (the Cyber-shot is too, but the PowerShot was just a touch more). But I found that my girlfriend's camera, which was a Cyber-shot, had a better macro and was MUCH better for low-light photos. So I started using that all the time for food pictures.

For Valentine's Day last month, she bought me a newer model of the Sony Cyber-shot, ostensibly because she loves me, but really so I would just leave her camera alone. (I just read this to her and she claims that's not true.) This is an amazing camera - the Cyber-shot W220: 12 megapixels, image stabilization, a setting for food shots, 4x optical zoom, etc. It cost $150 - about one-third of what my PowerShot cost only four years ago. I would not hesitate to recommend this camera to anyone.

Was thinking about getting a new camera myself. Shocked yours was that inexpensive. Any negatives to it?

Mikey, for me, absolutely no negatives whatsoever, however let me stress that I am a very amateur phtographer. I did not get my first digital camera until the end of 2004, and even then it was a Christmas present from my parents (because I'd taken a trip to New England in October and Rite Aid ruined 80% of the photos I took on that trip, which, as you can imagine, sucked big time).

95% of the pictures I take are of two things: food and my cat. (I'm really not that big a dork, I swear!) I think I have used the movie camera twice (and yes, both were movies of my cat. OK, maybe I am that big a dork.) The only negative aspects I have read about this camera pertain to making movies with it, and that just doesn't apply to me.

I got this at Best Buy. I had already researched it and was leaning towards getting it, but I wanted to compare it to a similar Canon. But the employees could not find a power chord to get the Canon to turn on. So I just bought this one. Or, more accurately, Elizabeth bought it for me. (I wonder how Canon would feel about the fact that people aren't getting to test their cameras in the store because the employees can't turn them on?) But I am extremely happy with it, and I literally would be just as satisfied if it had been twice the price. Even if I'd paid for it.

You have a nice camera. The sony does a pretty good job. I recent purchased the Canon Powershot S90. It is a bit pricey - around $400, but it is phenomenal. It makes an amateur photographer look good.

That's a great camera - much better for low-light shooting than the Canon I had. I was not interested in spending that much for a new camera, but if I had been, that's the one I would have purchased.

I LOVE churros, and these were fantastic. I really enjoy Olvera Street. It's always been a fun day every time I've gone.

Great now I want a churro