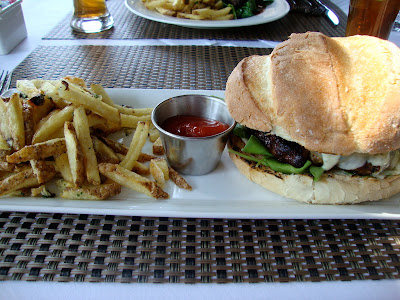 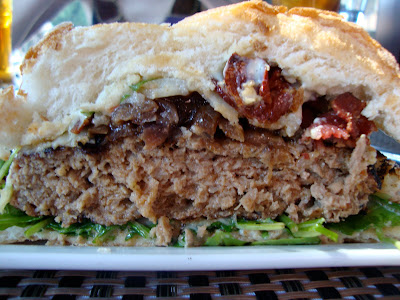 Last week another website did a short profile on me in which I called the burger at Green Street Tavern the best in Pasadena. A few people questioned me about that, a couple of them animatedly telling me that I was wrong. (This always makes me laugh. It's called an opinion, people; when you are profiled and you call the Carl's Jr. "Double Guacamole Bacon Burger" the best in Pasadena, I will not argue with you.) But quite a few other people were simply curious about the burger, asking what it is that makes it so good. I gave an explanation to the first couple people who asked about it, but then started saying "I tell you what, I will post a picture of it next week."
Sunday afternoon I stopped by for lunch. It was a gorgeous day and I sat at a sidewalk table on Green. There was a large party going on inside - this seems to be a fairly common occurrence these days at Green Street Tavern - but I got the table I wanted and the service was excellent as always, so I couldn't complain. I ordered the Wild Boar Burger, medium rare with fries.
It took between fifteen and twenty minutes to receive the food, a surprisingly quick time considering how busy they were. (However, I would have gladly waited twice as long; it was a beautiful afternoon and people were everywhere, a nice day for people-watching, which is always better on Green than Colorado.) I sliced my burger in half, which is somewhat of a necessity: the melted mess of manchego tends to drip out onto the plate if you attempt to eat the burger whole. I don't mind the mess, but I mind losing the cheese.
As you may have noticed in the photo, the burger was not medium-rare, it was pretty much the textbook definition of medium-well. I don't like sending things back, but I hate overcooked meat more. I took a bite to see how it was. It was still delicious. I decided to eat it. (It really was delicious. Trust me, I would have sent it back if it was not.) The cheese, greens and wild boar bacon provide a beautiful texture, and the bun is exactly what I want encasing a gourmet burger: enough resistance to hold together until the very last bite but still soft enough not to interfere with the quality of the ingredients.
The fries were once again great, and probably my favorite fries in Pasadena as well. These are freshly cut and fried twice, then served with a bit of chopped garlic and a slight dusting of truffle oil. Hell, take away Wurstkuche and these are probably my favorite fries in the entire world. I have never left one on my plate, and this time was no exception.
I have had this burger several times. This was my least favorite (because it was overcooked) but it was still fantastic. I would get this burger every single time if the "al pastor" sandwich wasn't so damn good as well. But that's a post for another time...
An Update 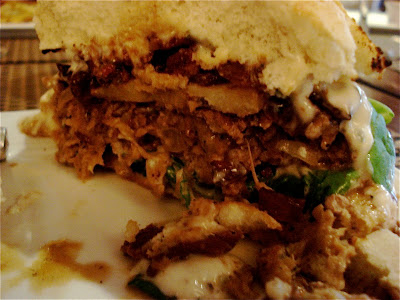 I decided to add this picture because the Two Guys make a good point in the comments below - pork does look different than beef when it is cooked, and pork is almost always cooked well done; very rarely is a customer given the option of medium-rare for pork. However, this picture is of the Wild Boar Burger I had a couple months ago at Green Street Tavern, again requesting it medium-rare. It's not a great picture, but you can tell that it was much juicier and pinker than the burger I had the other day. This is what I was expecting to be served again, but the burger I received was much more done. But, as I have pointed out, it was still delicious.
Posted by JustinM at 8:12 AM

Medium well does look dreadful. But we love the description, and the menu of the restaurant at the restaurant's website looks marvelous. We are certainly headed over soon to try out this place. Have you tried the short rib sandwich or the short rib dinner plate?

While the answer to your question is yes, I have tried the short rib sandwich (that's the 8th post on this blog, from September of '08), they no longer have it on the menu. The listed menu on the website is really outdated, more than a year if memory serves.

A few of the items are still there, but most of them are different. This is fine, though; the food is much better than it was when I first started going there, especially the lunch menu, which I prefer to dinner. And, something I know The Two Guys will appreciate, their wine list is interesting, and probably the most reasonably priced in town.

Wait now I want to hear about the al pastor!

That looks good, but I want to hear about the pork sandwich too.

I think the medium well looks fabulous. I love a blue steak but for some reason, undercooked ground meat freaks me out.

I am certainly wary when it's a place I do not trust. If I were to get a pink burger at a diner I might be hesitant to eat it. But when I know the beef is high quality, like Green Street, RWB, Firefly, etc., I like it nice and red and juicy in the middle. I don't want to pay a lot for quality meat and then have the flavor cooked out of it.

yo pulled porker, can we get a link to the website that wrote about? thanks.

*wrote about you (sorry)

I LOVE Green Street Tavern. It's my favorite restaurant in the area. I love sitting outside on the tree lined street. And the food is always outstanding.

Well, you convinced us.... The Two Guys are going tonight.

Yeah, it was really hard to convince you guys to go out for great food and wine... Have a good time and let me know how it goes.

After thinking about it. I did enjoy the burger at Green Street Tavern. I am also beginning to like pork burgers as well.

Have you ever had a lamb burger? I'm not a huge fan of lamb but a ground lamb burger with feta cheese and tzatziki sauce is great.

PULLED PORKER: The Two Guys did go to Green Street Tavern. (Twice -- once for dinner and once for lunch!) And we did try lots of things, including the Wild Boar Burger. Though we ordered it medium rare, the burger arrived looking just like the one in your picture. So The Two Guys scratched their heads and asked the server what happened. He said, "It's medium rare, but remember, it's pork, and medium rare pork is not pink like medium rare beef." Hmm. "Oh," we thought, somewhat chagrined that we hadn't realized that "boar" really and truly meant "boar" as in "pork."

But more on that when we post our review in a few days.

Thanks again for turning us on to a really great restaurant with a wonderful chef.

I'm not sure I agree with that - I have had medium rare pork at restaurants, and it is indeed pink. Now, it's somewhat of a gamble eating it that way (although I have never come close to getting sick,) and most restaurants will not even offer it. But since I was asked how I wanted the burger cooked and requested medium-rare, I was hoping it would be a little less done than this. It was still delicious, though.