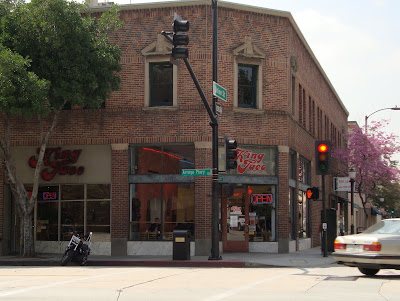 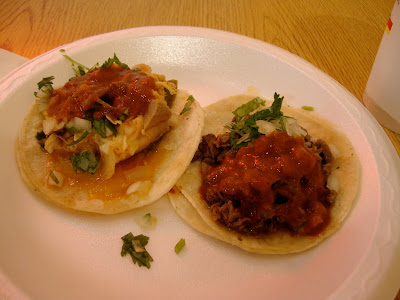 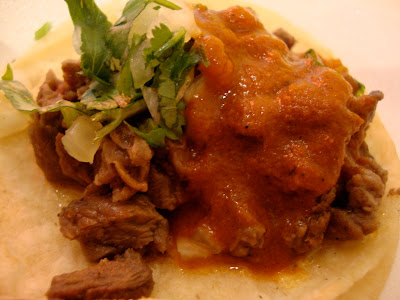 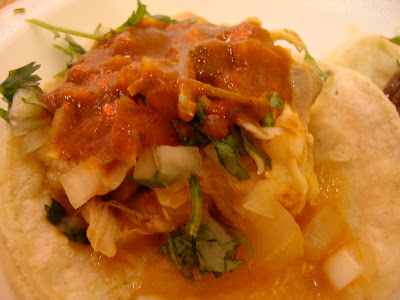 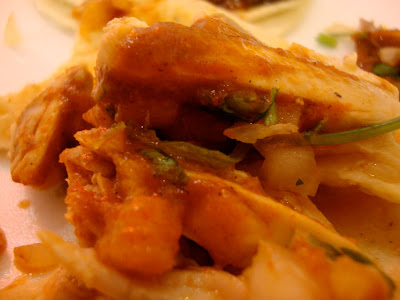 King Taco has been open for several years in Old Town, but I'd only eaten there twice, both years ago, and neither time was I impressed. The food just didn't taste very fresh. This was the fifth or sixth King Taco I had been to, and by far my least favorite. It wasn't terrible but if it was late at night I much preferred the taco truck that used to be in the parking lot on Fair Oaks and Union, where The Container Store is now. During the day, I preferred heading up Fair Oaks a few blocks to El Taquito, which I've always thought was several times better than King Taco.
But I was meeting my friend Bryce to drink some beer and watch some March Madness, so I figured I could use a little snack first. This was about 4 in the afternoon and King Taco was as uncrowded as I have ever seen it. I ordered one chicken taco and one carne asada, both with hot sauce. The food was ready in less than a minute. The two tacos and a drink cost just over four dollars.
The chicken taco was much better than I remembered, but the carne asada was the same. I can't really complain too much about a taco that cost $1.25, especially when I ate all of it, but this tasted like carne that had been sitting around for a day or two. If I return - which may well be a few more years - I will stick to the chicken.
Overall, I have to say I like King Taco. It serves its dual purpose of feeding the lunch crowds and the late night crowds (they're open very late on the weekends). It's nice to have a few places left that are inexpensive and easy. But I'm more excited about the hot dog joint opening next door than I am about returning to King Taco.
Posted by JustinM at 10:54 AM

There's a hotdog joint opening next door to King Taco? Praise the gods.

That's the rumor, but you know how things work in this town. I do like the idea of it, though - the deli replacing Famima!!, a new hot dog place, etc. It'll be nice to have some more options when you don't want a sit-down meal.

Anything would be better than Famima.

I thought Famima served several nice purposes, however their food was not one of them.

After all that including you don't expect to return for a few years, you still say you like it overall!?

I've been once. More than enuf for me.

I still felted famined after visiting Famina, despite coming hungry.

Yeah, it's a bit of a contradiction. But I like more what it represents - a place where my dad or my friend Tracie (both of who work within 100 yards) can grab a quick bite at lunch and get change back from a ten, you know? I'd rather Bada Bing or Rock Island Wraps were still around but King Taco will do. It's nothing special but it's not bad.

this king aco reminds me how much I love the US! Pierre in Paris