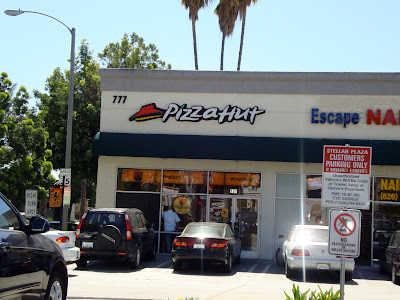 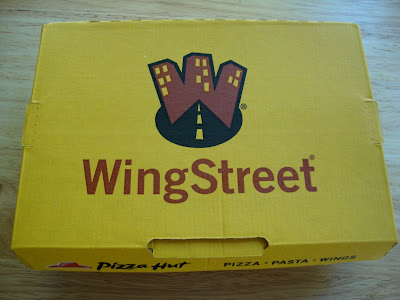 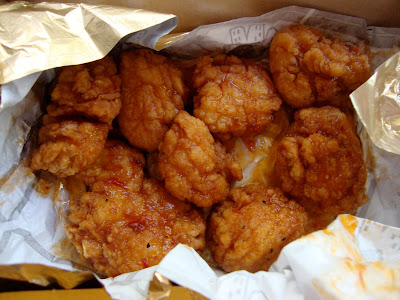 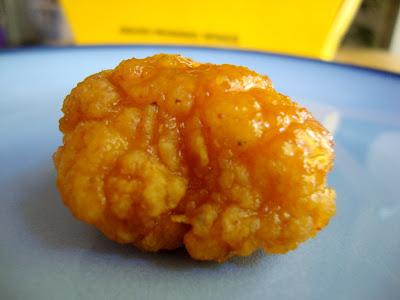 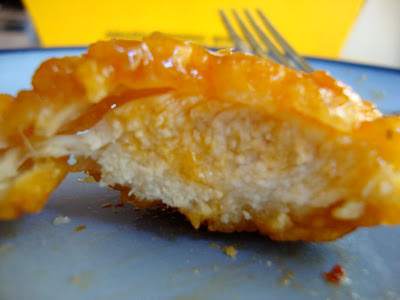 When Pizza Hut started co-branding some of their units as "WingStreet," I was as conflicted as I have been in a long time. It was like when perennial loser Karl Malone joined the Lakers, or perennial pansy Freddie Prinze Jr. joined the cast of 24. I hate Pizza Hut. Other than their thin crust, which is somewhat tolerable, their pizzas are disgusting grease bombs that taste like cardboard and fake cheese. If I were to list the ten worst slices of pizza I have ever had, nine of them would be from Pizza Hut.
But I love boneless wings. With the exceptions of barbecue, popcorn shrimp, Belgian fries and lobster, there is probably not another food that I enjoy more. (The best I have ever had, by a wide margin, are from Wing-It in Boston. If anyone has suggestions for boneless wings in the Los Angeles area, I would be appreciative.) Back in 2007 my friend Penny and I got a couple orders of WingStreet wings, but I honestly don't remember anything about them; that was more than two and half years ago and I was drunk.
I've thought about trying them again several times over the last two years, but never made the effort. What's the point? There are so many restaurants in Southern California that I've never been to; every time I'm going to make the effort to go out for food, I've had a better idea than Pizza Hut or WingStreet. Plus, they're not really a good value. At my local WingStreet, the small order of wings works out to about a dollar a piece. (The boneless wings are fifty cents more per order than the traditional wings.) That's much more expensive than Wendy's, and even more expensive than Wingstop. I couldn't believe they would really be any better.
But recently WingStreet has been offering fifty cent wings on Wednesdays. That's a much more reasonable price. Not enough to make me rush out and get any, but a couple days ago I was at Whole Foods in the mid-afternoon and hungry for a snack. WingStreet is just a couple blocks south, so I stopped by and ordered an 8-piece boneless wings in "Spicy Asian" flavor. The total was $4.39.
The wings took about fifteen minutes to be ready, a curiously long time. They weren't busy - three guys were standing around in the back and the whole time I was there they only prepared one pizza - so I was expecting it to take less time. But, whatever, I didn't have anything else to do. I took the wings and drove the five blocks home. They were wrapped in foil and stayed very hot.
The boneless wings were good, but not great. The sauce was similar to Wendy's - an annoying sweetness but a decent amount of spice. At fifty cents each, they are an okay value. They are pretty small; some of the pieces I ate in one bite. But overall they made a good snack. I might go back and try the cajun flavor on a Wednesday, but I would certainly never pay full price for these.
Posted by JustinM at 9:41 AM

We love this post. No really, we LOVE this post. Your writing and photos are so excellent. We enjoy reading your reviews. But we must tell you that we would never, ever, EVER, consider eating at WingStreet. And your post only serves to confirm our position. (Yes, even on Wednesdays. Well, unless Vertical Wine Bistro (Pasadena) has their short ribs on the menu that night . . .)

Thank you for the compliments.

I'm trying to think of something you are missing by refusing to try WingStreet. I cannot.

What was the other worst slice of pizza?!!!!

D'Amore's at the L.A. Farmers Market. It is the only slice of pizza of my life that I remember refusing to eat. It was room temperature, covered in grease, and the cheese was almost rock-hard.

Think honestly about what turns you off about our products. Is it the wrong breading, the wrong sauce, are the boneless chunks too small?
Tell me how we can improve. You name it. We really want to know how not to suck so bad then.

Hi Jason. First off, thanks for taking the time to comment.

Second, nowhere in this post did I say the boneless wings suck. My exact words were "good but not great." That's a far cry from "suck."

Are the boneless wings previously frozen? Because they definitely have that taste to them, that lack-of-moisture-and-freshness taste. I'm not sure if there is any way that can be avoided, though. If you have to freeze them before you ship them, I just don't see any way they will ever be better than good.

Also, and I don't know if you have anything to do with this - the sauces aren't very different. They all taste like an oil-based sauce and that is the dominant flavor, not whatever spice they promise to be flavored with. Contrasted with a place like Church's, whose sauces are all tasty, the WingStreet saucea are all disappointing.