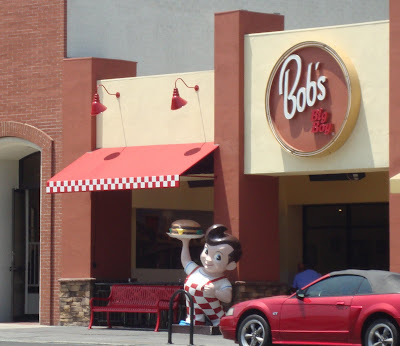 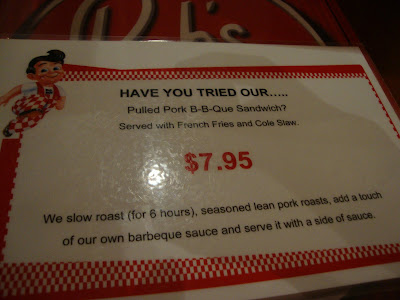 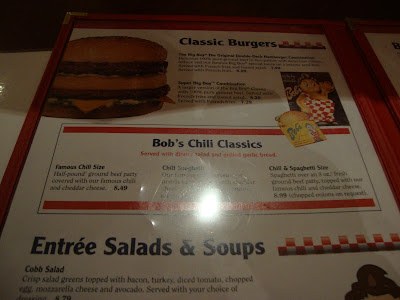 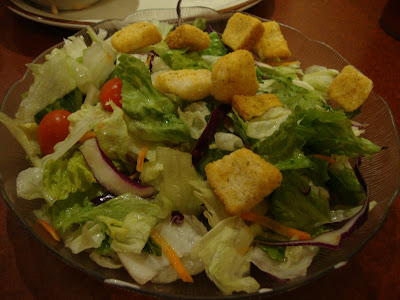 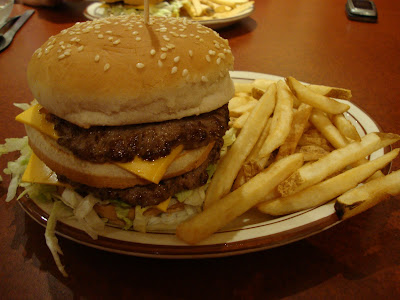 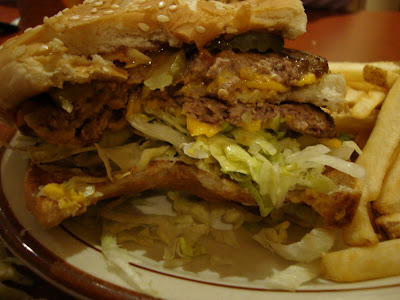 Thoughts of Bob's Big Boy weave themselves through my childhood memories as strongly as any restaurant other than perhaps Hutch's or In-N-Out. There was one in Monrovia that my grandmother often took me to. I don't remember what age I started going there (although I do remember drawing in a coloring book with a cover that advertised the year turning 1984, when I would have been 5). I only remember getting two items: the "Big Boy" burger and the chicken strips.

It's been 8 years since my grandmother died and probably twenty years since I've been to that Bob's, but I remember it vividly. My grandmother was a sweet woman but she had a curious habit of thinking that other diners wanted our food.

Of course, no one ever wanted any of our food. Even as a child I understood this. Other diners were there for the same reason we were: to get their own food. But this did not deter my grandmother from offering it. The final straw was the time she held her dinner roll over her head, waving frantically as if we we were marooned on an island and she spotted a passing ship, yelling at a couple perhaps thirty feet away: "WOULD YOU LIKE MY ROLL?"

My brother and I had a discussion with her pointing out that no one had ever - not once - accepted an offer of food from her. I think there was some mention that we would have to stop going there if her behavior didn't become a little more, you know, normal. Which it did, so we continued eating at Bob's.

Eventually that Bob's closed, I grew up, and I never really tried to go to any of the others. Four years ago, I stopped at a "Bob's Big Boy Express" up on Highway 126 in Santa Paula. To call it disappointing would be an understatement. It was lousy. I mean really lousy. Like The Godfather, Part III, I hated it so much it made me question if I'd really loved what had come before. (Four weeks ago I drove Hwy 126 on my way to Santa Ynez; that Big Boy is now a Del Taco, which would undoubtedly be an improvement over the food I had.)

At the beginning of the year, Bob's returned to Pasadena, a location on the corner of Lake and Del Mar that used to be a Baja Fresh. I was hesitant to visit. I did not think it would be as bad as the Express location, but I knew it could never realistically live up to the old Monrovia location that I loved so much. Early last week, however, I got a craving to give it a try. Literally the next day I was talking to my mom and she said, out of the blue, "You know what sounds really good to me? Bob's Big Boy." So we came up with a plan to visit.

While parking the car we were talking a bit about Bob's. I mentioned that there had been one in Pasadena that closed almost 30 years ago. I forgot for a second that I was talking to a woman who has lived here her whole life.

"Yeah, I remember" my mom said, "I went to that Bobs's with my friends the day John F. Kennedy was killed. We sat around and ate and nobody said anything."

I imagine there are quite a few people who have anecdotes about Bob's like my mom and I do. My friend Phil and I were emailing about burgers that day and I mentioned that I had just gone to Bob's with my mom. He shared his thoughts on the place. I'm sure most people who grew up in Southern California can do the same.

This location was bigger than I thought it would be. We sat in a booth underneath an old time photograph of Old Pasadena, coincidentally of the building where my dad now works. It was early when we arrived, about 11:40, and it wasn't very crowded, but by the time we left 40 minutes later, the place was packed and people were waiting outside.

I opened a menu, although I realized this was completely unnecessary.

"Look, they have a pulled pork sandwich," my mom said.

I had noticed that, too, and I love pulled pork sandwiches more than almost anything else... but I knew I wasn't going to get one. You can't come to Bob's and not get a burger combo. That would be like going to Montana and skipping Glacier National Park in favor of "Evel Knievel Week" in Butte. (Okay, that's a bad example; I did that once. But, you get the point.)

"I don't know why they put the dressing on the side," our waiter said when he delivered the salads.

"It's no big deal," I said, and indeed it wasn't, although the salads weren't very good. The lettuce was watery and the whole thing was flavorless, even with the dressing. But I don't expect much out of a dinner salad included with an $8.29 burger combo.

A few minutes later we received our burgers. The fries were terrible - undercooked and barely room temperature. I remembered liking the fries at Bob's. Clearly they were different than these. The burgers looked exactly the same as I remembered.

They did not taste the same, though. They were good, no doubt about that, but perhaps they've changed, or I've changed, or maybe a bit of both. They just did not have that comforting taste that I'd remembered. Perhaps it's unfair to expect a burger to elicit the same feelings as they did when I was 11 years old. But it did not. It tasted like a messy, decent-but-nothing-special burger.

I contemplated getting a milkshake. Bob's always had one of my favorite shakes. But I couldn't get myself excited about drinking one just after noon on an overcast day. So I may return at some point and have another burger and get to shake to go along with it. But I have a nagging feeling that I have probably eaten at a Bob's Big Boy for the last time in my life.
Posted by JustinM at 11:12 AM

This calls for a complete investimigation!
I too remember the unique taste/texture of the original Big Boy burger. A friend of mine worked at the West Covina store in the early 70's (he was sent to Fresno for training to learn how to "build" Big Boys). We spent plenty of time at that Bob's, on Bob's dime thanks to my buddy.
The oldest remaing store is on Riverside Dr. in Toluca Lake (Burbank?).
I am compelled to go there today to see if this store has retained the quality of the original Big Boy.
This burger lover will be reporting back with his findings.

The early 70s? How did that work if you were just an infant then? Only kidding. I have driven past the Burbank Bob's many times. I would definitely give that one a try.

Nice bro. This brings back a lot of memories for me and the Bobs in Glendale.

I just had the Big Boy Combo at the Burbank store and am happy to report that the burger recalled the old days to perfection.

I ordered the salad with Blue Cheese dressing and it was fine.

The fries on the other hand were inedible. They looked perfect on the plate (which, by the way, is far too small), toasty-brown and steaming, but they had the texture and flavor of cardboard, or maybe gypsum board.

The burger was very tasty and satisfying though. I forgot that they use chow-chow sauce. Good stuff!
Thanks again for the inspiration Justin.

I enjoyed the fried chicken and minestrone soup almost every visit of my youth. That was the first restaurant I had minestrone soup at and it was with great disappointment later in life to discover "Bob's" was the only restaurant in the world to use lasagna noodles in their soup. True geniuses at work. It darkens my heart to hear it will not stand up in memory for me so I'll take a clue and never visit it again. Dreams of a cherished youth are great dreams indeed.

So I've inspired one person and darkened the heart of another. All in a day's work, I guess.