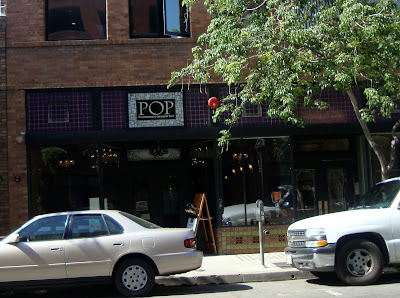 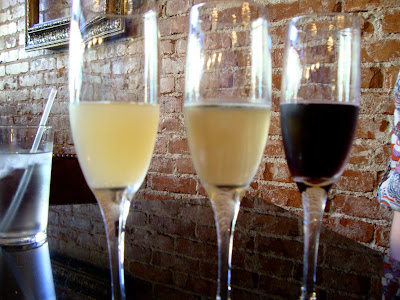 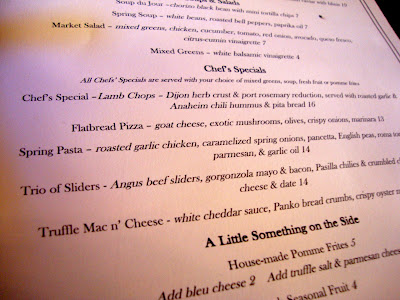 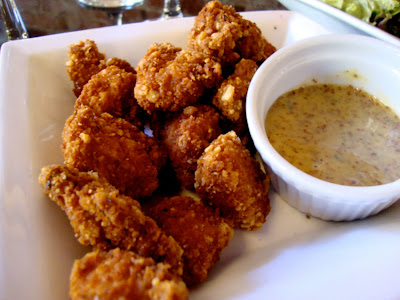 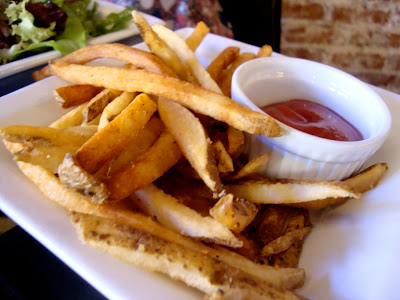 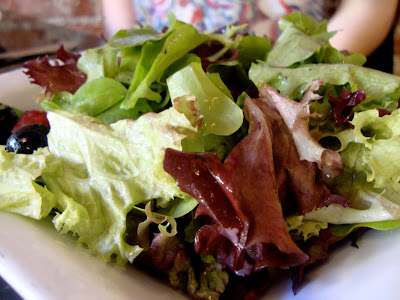 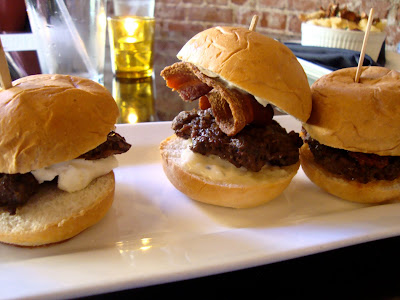 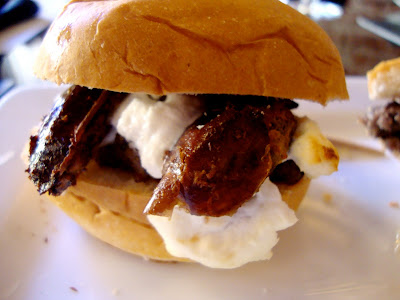 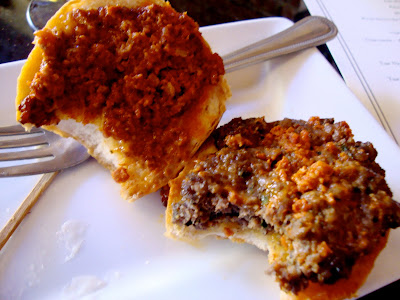 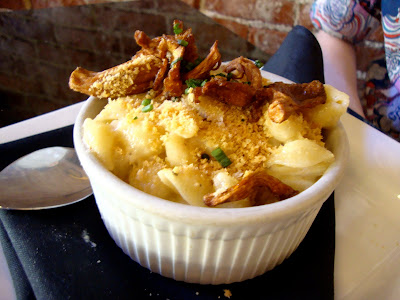 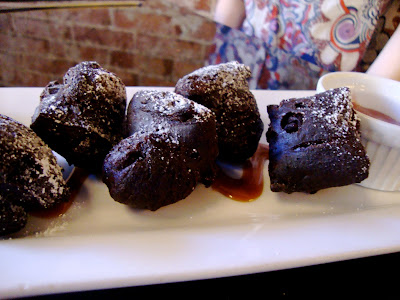 On Union Street, on the same block as Dish and Quadrupel, Pop Champagne & Dessert Bar has been open for a year and a half. But I never considered going: I don't care for champagne or dessert. I don't hate either, and every once in a while I will try some, but the idea of going to a place that specializes in those two things did not appeal to me.

A couple months ago, Elizabeth and I were in the mood to go out for a drink somewhere outside of our normal routine, so we stopped in to Pop. Our friend Carla met up with us and the three of us had a few drinks that were nothing special and some appetizers. I stayed away from the champagne that night and sampled a few wines from their minuscule wine list, almost all of which were weak. This isn't really a fair complaint; I realize my favorite wines are at the opposite end of the spectrum from carbonated, sparkling wine, and a bar specializing in champagne probably isn't going to concern themselves with carrying the kind of wines I love.

What really impressed me that night was the food. We had some popcorn chicken (called, too cutely, POPcorn chicken), the ladies had a wild mushroom and goat cheese bruschetta, and we all shared some pommes frites with truffle oil and parmesan cheese that, for just a moment, I thought might have been the best fries I had ever had.

Saturday night, Elizabeth and I were in the mood for another celebratory dinner, and I was again craving that popcorn chicken. It wasn't packed when we walked in but still crowded; there were two large groups on opposite sides of the restaurant and several women at the bar. (I should point out, if you're a single guy, I have never seen a bar or restaurant with a higher ratio of women to men. It's been like that for all three of my visits.)

We started with a sampling of champagne, a "Worldly Bubbles" tasting. I asked if the sparkling wines were always the same. It turns out they change constantly and the server was not sure what they were. She started to go ask, but I said it didn't matter, that we'd take it. In matters like this it's best not to over-analyze.

The red sparkling wine was my least favorite of the three. "This tastes like grape juice with alcohol," Elizabeth said. I gave her a puzzling look. "I mean," she said, "I know that's basically what it is, but this really tastes just like it." She was correct. The Sofia Coppola champagne (the middle one in the picture) was my favorite of the bunch. After we finished these we did not feel like any more champagne and we each got a glass of Malbec, my favorite of the wines they carry.

I ordered the trio of sliders and Elizabeth ordered the truffle mac n' cheese. The entrees come with one side so I selected those fries I love, while Elizabeth got a salad. Our sides were brought out to us well in advance of the entrees, which I appreciated. The pommes frites were not as good without the truffle oil and parmesan - no big surprise there - but they were still outstanding, some of my favorite anywhere. We shared them, along with the salad, which was also one of the best side salads I have ever had. The vinaigrette was fantastic, and we dredged a few fries along the bottom of the plate when the greens were gone.

My sliders arrived in three flavors: goat cheese and date, bacon and gorgonzola mayo, and Pasilla chillies and chorizo. They were all great, although my favorite was unquestionably the bacon and mayo - crunchy and smooth and served on an ideal bun.

The mac n' cheese was amazing, too, with a white cheddar sauce, panko bread crumbs, and fried oyster mushrooms. It was a little on the decadent side, but that's sometimes fun. I was more than willing to help finish the dish, because Elizabeth wanted dessert. She ordered the chocolate beignets, which I thought looked like pieces of charcoal. They were served with strawberry and caramel sauces. I actually gave them a try. What can I say? I just don't like chocolate and I didn't like these. I took a picture of these with my phone and sent it to a few people; they all thought the dessert looked fantastic. I was clearly in the minority.

I love eating at Pop. True, I wish they had more wines, but I can make do with a glass or two of champagne. Their food is very, very good. And they do have Miller High Life: "the champagne of beers." Of course I had to finish the meal by drinking one. 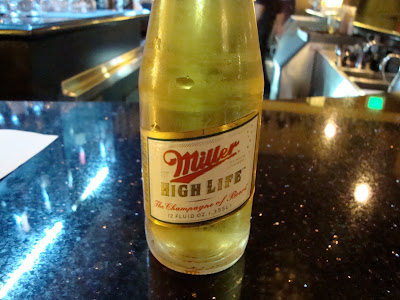 That all looks damn good. I haven't been to Pop since the Great Hangover of January 3, 2009, but I think I may have to return soon. The Italians are in town & Lorenzo despairs of finding an aperitivo in Old Town.

I agree with OMG. It looks much better than expected.
I always considered this to be a place of very limited substance, however unfairly since I haven't tried it.
It advertises itself as a Champagne & dessert bar, which sounds like a place where girls go for book club meetings.
I may not hustle in there immmediately, but I will no longer rule it out.

Ha! Book club meetings, they are just an excuse to chat and drink. So t you might be right on that one. However, the food is really great. The popcorn chicken is consistently delicious. The mac and cheese was outstanding. I'm glad I saved room for dessert, the chocolate beignets were a nice way to end the meal, and the strawberry sauce with it....yum!

I'm sorry I could not get over the "I don't like chocolate" comment, but that mac and cheese looked lovely.

I know, it often surprises people, but I have always hated chocolate. I have had European - especially Belgian - chocolate that tasted much better to me than American milk chocolate. But I still didn't like it very much.