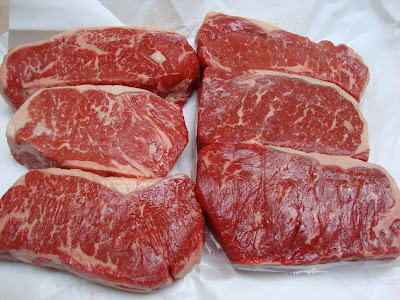 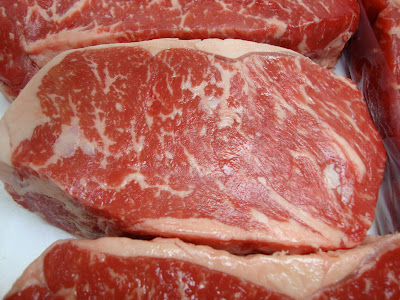 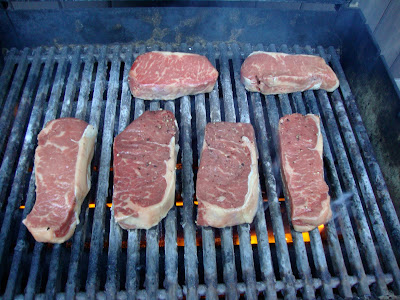 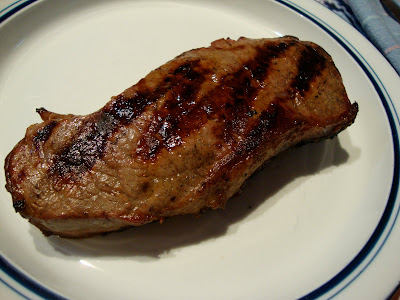 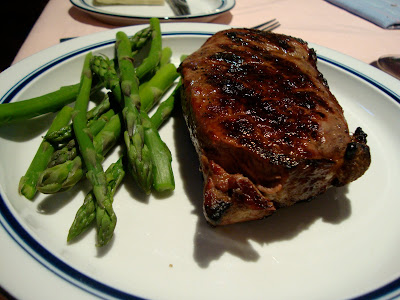 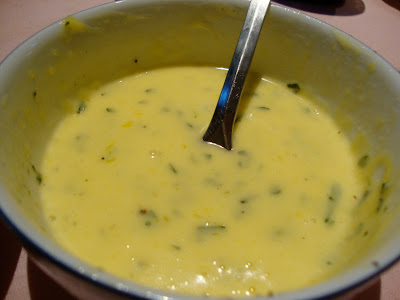 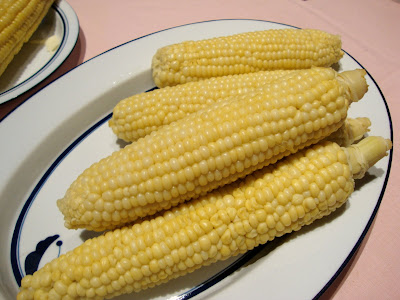 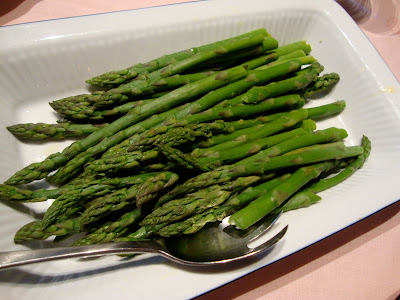 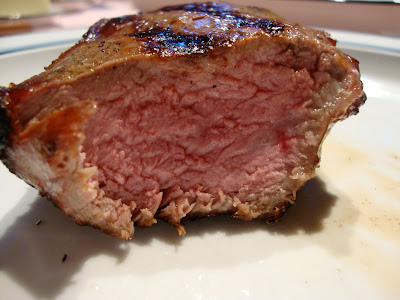 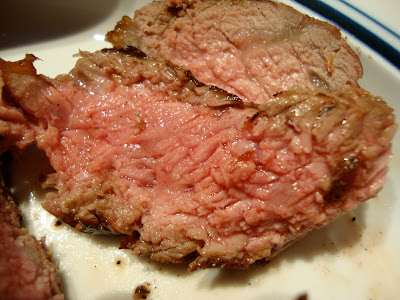 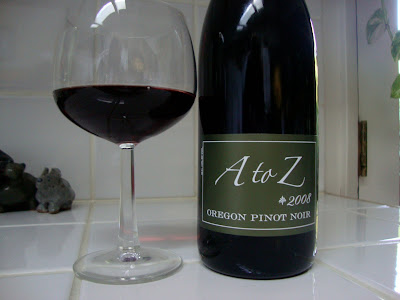 As I've written before, my parents are very laid back about things like Mother's/Father's Day, Easter, Christmas... well, hell, just about every holiday. Except Flag Day. They are peculiarly authoritarian about our Flag Day routines. (Only kidding.) So when I suggested instead of doing something Sunday afternoon for Father's Day, Elizabeth and I spend the night Saturday night, make a big dinner, and then leave early Sunday, that was just fine with them.

My brother and one of his friends came over to my parents', too, so I got 6 New York strip steaks at Taylor's butcher shop: thick, marbled pieces each about the size of a brick. I didn't want to do anything too fancy to such pretty pieces of meat, so I simply rubbed a little butter and cracked some black pepper on each.

While the meat was sitting out to warm up - for about an hour - I steamed some corn and my mom cooked some asparagus. Normally I would have done both, but I was making a surprise for my dad: Béarnaise sauce. My dad freaking loves Béarnaise, and always asks if he can have some whenever he orders a steak at a restaurant. At most place, the answer is no. So I wanted to make some for him for Father's Day. I'm not saying I was intimidated by making the sauce (although I probably was a little) but I wanted it to be perfect, so I needed a little bit of help in the kitchen.

I cooked the steaks for six minutes on each side, then let them rest. They were fantastic; perhaps a touch past the medium-rare I desired, but considering how thick they were, I was pleased with the results.

My dad lit up when I sat the Bérnaise sauce down in front of him. "Is this Bérnaise sauce?!!!" he asked excitedly. (Elizabeth was in the kitchen and later said she wished she had seen the look on his face to match his exclamation.) He loved it and said it tasted just like a good steakhouse version.

To drink with dinner we had A to Z Pinot Noir, from Dundee, Oregon. My parents have been big fans of this for years, often buying it by the case at Whole Foods. But I'd never tried it. (Pinots are very hit or miss with me and I rarely try them.) I have to admit, this was fantastic. I had three glasses, and would have had more if I hadn't been tired. (I didn't want to fall asleep at the dinner table.) 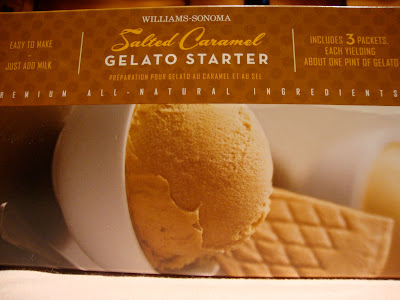 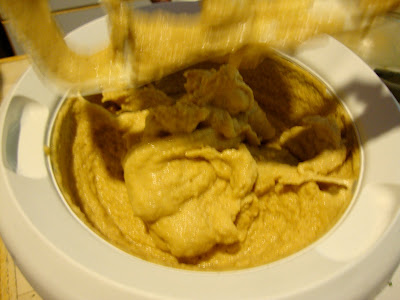 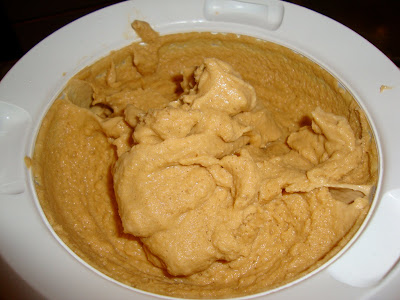 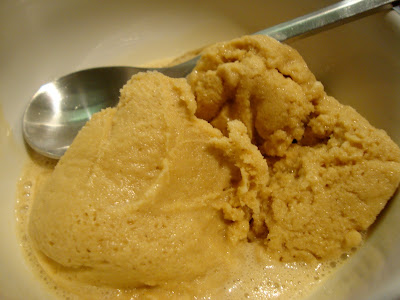 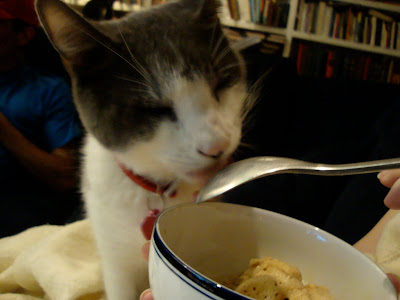 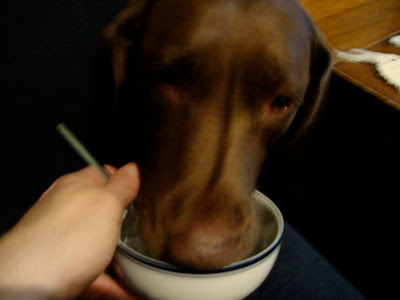 Last month, on Elizabeth's birthday, we had dinner at a popular Pasadena restaurant. This was our first time there and I absolutely hated pretty much everything about the place. But the one thing that wasn't terrible was the dessert - a salted caramel ice cream.

A couple weeks later we were at Williams Sonoma and saw salted caramel gelato. We decided to get it and prepare it in the ice cream maker. "Oh," the sales person said, "people are saying that this doesn't work in ice cream makers... but we have gelato machines on sale!"

Predictably, she was completely wrong. (By the way, this was not the Williams Sonoma in Pasadena, where I have always had good experiences. This was down in Orange County.) This was the best ice cream I have had in years. Yes, it was pretty rich and I could only eat one bowl, but I'm not a huge fan of desserts, and I loved this. So did our cat and my parents' dog. 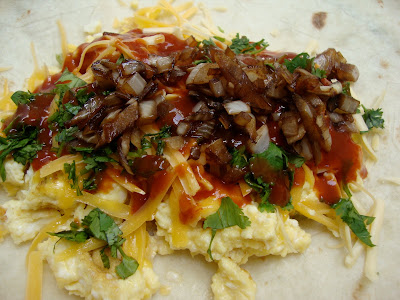 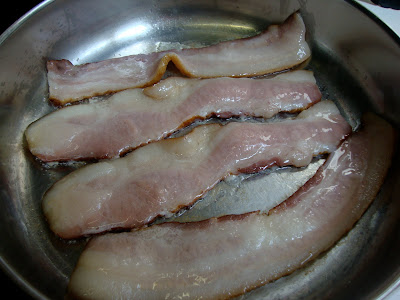 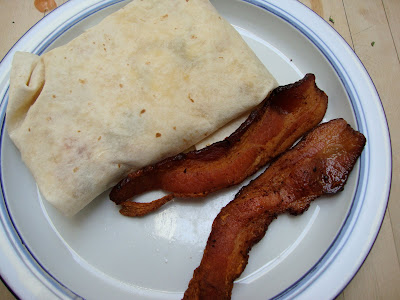 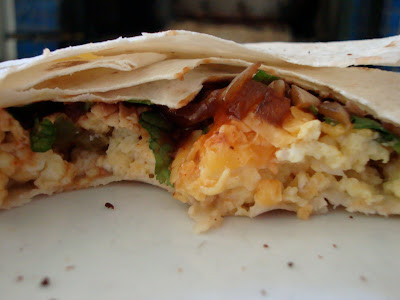 I cooked breakfast for everyone Sunday morning. I fried some thick Amish bacon and scrambled eggs with green bell pepper. I made myself a burrito with the eggs, Gouda and sharp cheddar cheeses, chopped cilantro, sauteed balsamic onions, and Taco Lita hot sauce. It wasn't anything spectacular, but it was tasty, and I did not eat again until dinner.
Posted by JustinM at 9:03 AM

The salted caramel gelato is AMAZING! And I'm pretty sure the cat and dog would have eaten a whole bowl on their given the chance.

The entire weekend was fantastic! The food was outstanding. Why should we ever eat out when we can stay home and have you cook for us. Thank you!

There is so much to be said with regards to making the most of the simple things and you've done it again.
The addition of the Bernaise sauce is just the touch to take a normally good steak dinner to the next level;
and to have chosen to make Gelato from scratch - a brilliant use of one's time!
Bravo!

Full disclosure: I had nothing to do with making the gelato.