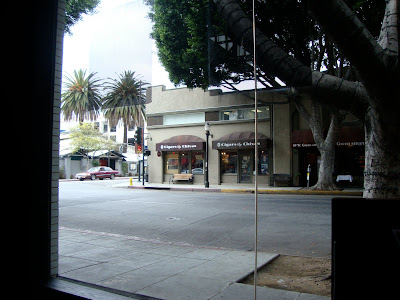 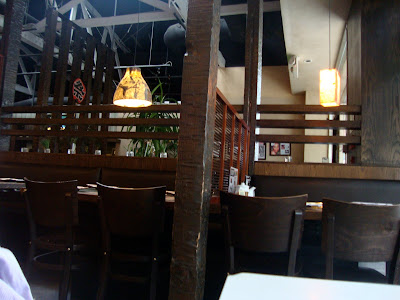 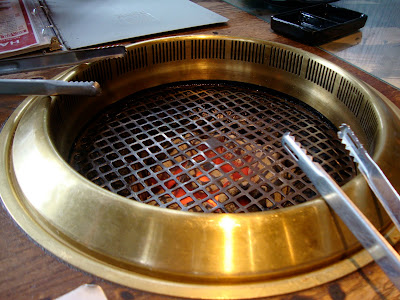 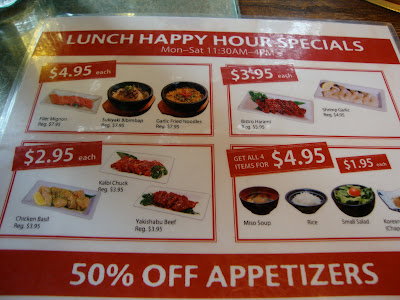 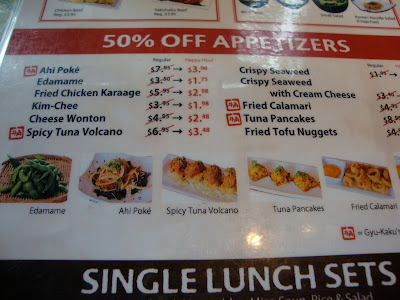 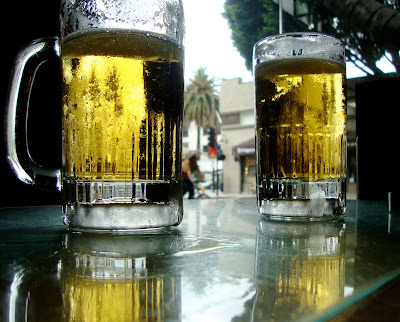 A few years back some of my high school friends were in town and I got an invitation to meet up with them at Gyu-Kaku for dinner. I could not make it and I was sorry I missed seeing my old friends, but the report I got back from that dinner was comical - or it would have been if a couple of them hadn't been so upset about it. Apparently the bill had worked out to just over $80 per person, and everyone left the meal hungry. 4 of the 6 people got fast food on the way home that evening. I have zero doubt if I had been there it would have been 5 out of 7.

So I never even considered going to Gyu-Kaku for dinner. The whole cook-your-own-food thing has never been my cup of tea. I see the fun of it, sure - I mean, I cook my own food at home almost every day. But do I really need to go out to do that? Because I have before, and more often than not it's a place like Boomerock (anyone remember that ridiculous restaurant in Old Town?) where you get small portions of overpriced food and you're not supposed to notice amid the "fun" of cooking your own food. A place where my friends dropped 80 bucks each and still had to get cheeseburgers on the way home to avoid going to bed hungry seemed to fit that description.

Then a year ago a buddy of mine sent out an email to a few people that he and his girlfriend had stumbled into Gyu-Kaku for their happy hour and it was really good. I don't remember everything he wrote in the email, but the phrase "99 cent beers" certainly grabbed my attention. I went that afternoon, and it was a lot of fun. The bar is small, with only a few high tables and a TV smaller than the one I have in my bedroom. But the snacks were good and the mugs of Sapporo were indeed 99 cents.

I went back several times over the next few months. The happy hour menu is available in the restaurant as well as the bar but I never bothered, always being content to hang out for an hour or so, drinking a few beers and munching on fried food.

Friday afternoon, however, Elizabeth and I were both done early and thinking about having a late lunch together. We considered a couple of quick options, but we wanted to celebrate my completion of something that I have been working on for almost two years, so we decided to go to Gyu-Kaku.

It was practically empty when we walked in. We took a booth by the window on Green Street, looking across the street to the cigar shop and Green Street Tavern. Our waiter told us the fryer was going to be down for 20 minutes so we put in an order of chicken karaage and tuna pancakes and told him we would take them whenever they were ready. We each ordered a mug of Sapporo - the price is up to $1.49 now, but it's still a very good deal. 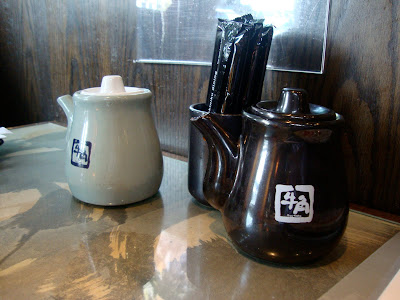 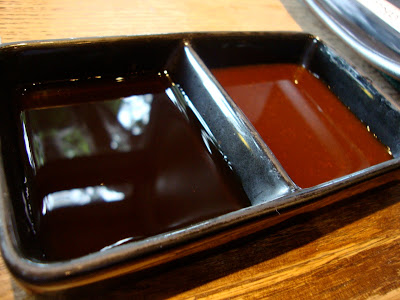 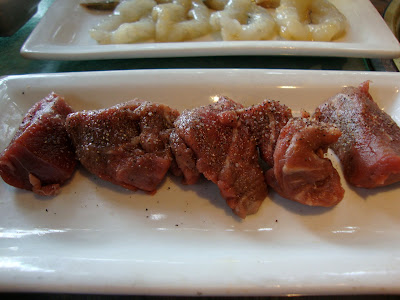 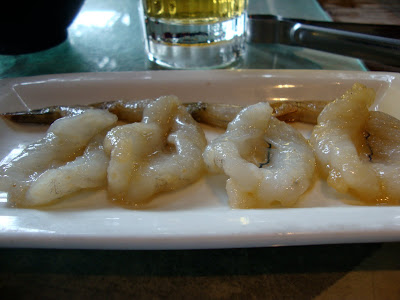 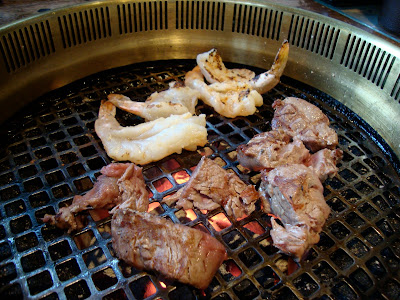 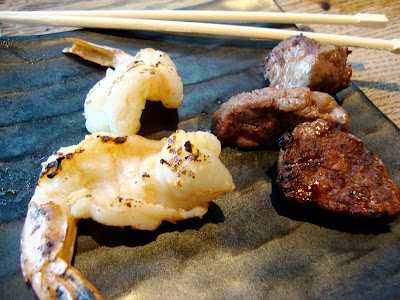 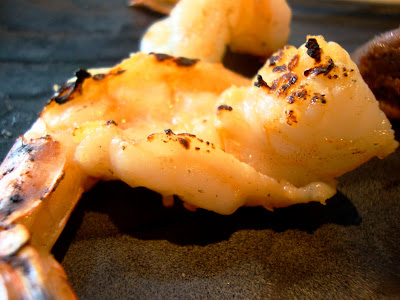 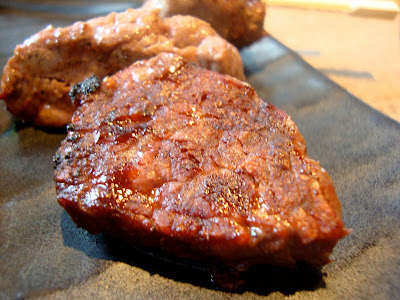 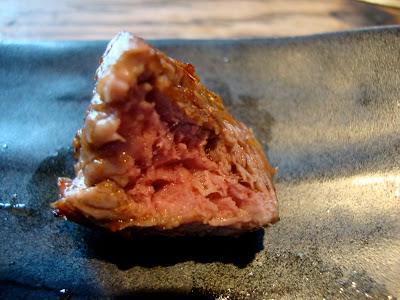 We ordered two things to start: filet mignon and "shrimp garlic." The meat came out relatively quickly and I threw it on the fire. The waiter said it should cook in about a minute per side, but the grill was not nearly hot enough for that; they took at least three minutes on each side. The shrimp was flavorful but the filet was disappointing. Or, rather I should say, it would have been disappointing at the regular price. It was only $4.95 on the happy hour menu, which was acceptable. But it was not very tender. 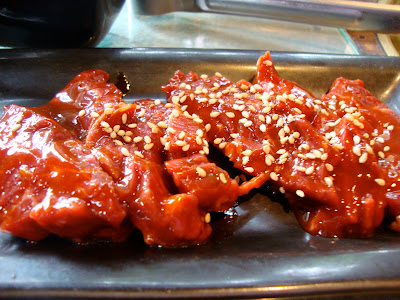 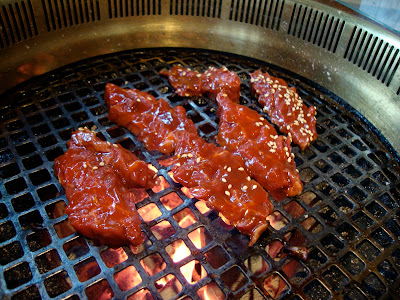 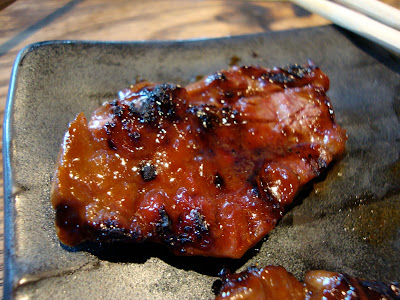 Our appetizers - which we were of course getting after our entrees - weren't ready yet and we were still hungry, so we ordered the Bistro Harami - thin cut steak with sesame seeds in a miso marinade. This was the same price as the shrimp ($3.95) and a dollar less than the filet mignon, and it was much better. Of the three meats we cooked, this was the only one that would be worth full price. 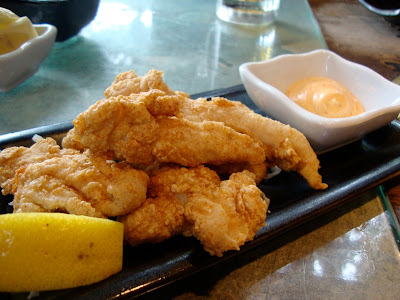 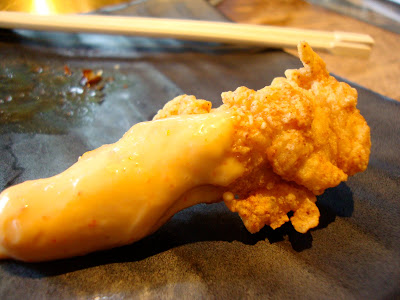 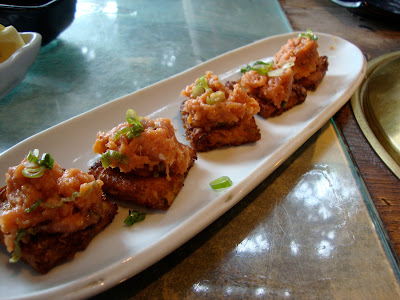 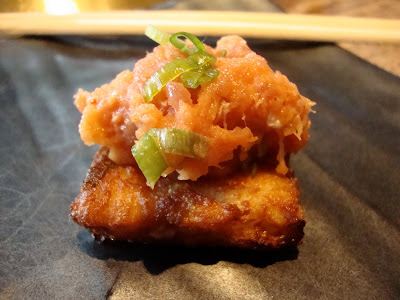 Finally we got out appetizers. I have had both of these several times before. The chicken karaage is hit or miss. Sometimes you get pieces of chicken that are crunchy and fresh (like these) and you think you could eat them for every meal. Other times you get rubbery pieces of chicken that could bounce off the walls like a superball and you decided never to order them again (although you still do). The tuna pancakes, however, have always been good. More often than not I have eaten more than one order.

As you can see, we got a pretty nice amount of food for a low price, not to mention six beers for nine dollars. Would I go back to Gyu-Kaku and sit at a table again? Yes, I definitely would do it for happy hour. I do not see any way I would pay full price for the meal, though. It's good, but it's not great, and the non-happy hour prices are too high for a merely good restaurant. The total for our whole meal, with tax and tip, was $40 - in other words, half of what each of my friends had to pay for dinner here. I would have been upset if I were them, too.
Posted by JustinM at 9:09 AM

The shrimp wasn't deveined? For real?

Yeah, I thought that was a little strange myself. I don't mind taking out the vein - every once in a while a restaurant will serve you a shrimp with the vein still in it by mistake. But it was obvious nobody had even bothered to try to devein these. Oh well, whatever.

I think your review is spot on. I enjoy the food when I go, but I always wonder who is going on and paying full price for this? If they made their happy hour prices the normal prices, I'm sure the place would be full all the time.

I've never been in for lunch, and I'm curious how the noodle dishes are. They seem like a pretty decent price if the portions are good.

This was a fun thing to do for a late lunch. Being that I had never done the indoor table grill thing before, it was a fun experience. I preferred the steak over the shrimp (although they were tasty too). And of course the appetizers are always good, especially the tuna pancakes!