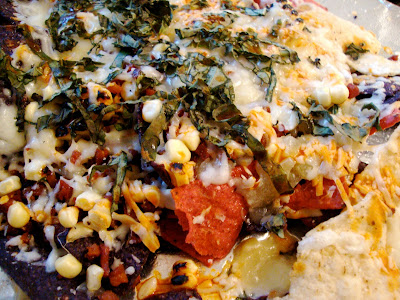 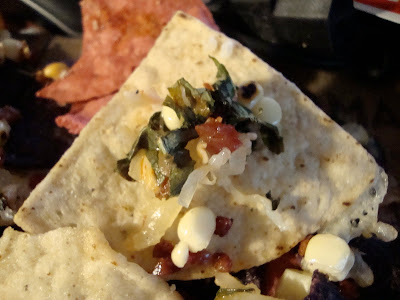 Back in high school, several of us convinced the gym teacher to let us play basketball all the time instead of soccer, gymnastics, water polo, or any of the other sports that for some reason we were supposed to play. Seeing as how he was also my basketball coach, it didn't take much convincing.

So there were about 10 of us who played basketball every day, and we all decided rather than wearing the official gym shirts we would wear different NBA jerseys. Of course we were trying to come up with a way of selecting who would wear what, since half the kids wanted to wear Michael Jordan jerseys.

After a couple of days of arguing, a kid named Mark showed up in a Rony Seikaly Miami Heat jersey. He claimed that Seikaly was his distant cousin so he should be allowed to have dibs on wearing that jersey. (As years go by this seems funnier and funnier; believe me when I tell you that nobody was fighting over wearing a Rony Seikaly jersey.)

This sparked a great idea: instead of wearing Jordan, Barkley or any other All Star, you could only wear the jersey of a second tier player (or 4th tier, in my case). Jae showed up with a Golden State Chris Webber jersey. Sam got a Lakers Anthony Peeler jersey. I tried desperately to get either a Sonics Xavier McDaniel jersey or, what would have been the holy grail, a Charlotte Hornets Kelly Tripucka jersey.

But this was 1995 and you couldn't just go online and find jerseys like that. One kid showed up in a Nick Van Exel jersey and we spent two days debating whether that violated the spirit of the rules because Van Exel had been second team All-Rookie the year before. In my memory we even put it to a secret ballot vote.

Sometimes I'm amazed girls even talked to me in high school.

Eventually, I settled on a Boston Celtics Eric Montross jersey for myself. I was a big fan of Montross when he was at UNC, even going so far as to get the same haircut one summer. Now, it might seem blasphemous for a Lakers fan to get a Celtics jersey, but keep in mind, this was 1995. The Celtics were meaningless. The Celtics have been good for the last three seasons and their front-running fans are very vocal, so it's easy to forget that prior to 2008 they had been irrelevant for two decades. Before one of their former players, Kevin McHale, gave them Kevin Garnett for almost nothing, it was easy to forget that the Celtics were even in the league. (Well, it would have been easy to forget, except you were reminded every spring when you saw one of their representatives at the NBA Draft Lottery, grinning over the chance to grab Jerome Moiso with a lottery pick.)

How does me buying a Celtics jersey 15 years ago relate to the Lakers winning the title this year? I'm glad you asked, although that will require a bit of another tangential anecdote. Don't complain. This is a free blog.

In 2002, my friend Taylor and I had started a bizarre rivalry where, whenever either of us was on vacation, we would purchase a t-shirt for the other. The rivalry lay in the fact that the shirts had to be funny and/or inappropriate. I thought I had gained the upper hand in Memphis when I had purchased him a shirt of Fat Albert and the gang lounging around on Beale Street. (At at the time it seemed funny. All these years later the shirt mostly just seems offensive.)

I liked the shirt, but after my buddy Zach and I watched the Angels get hammered by the Giants in Game 5 of the World Series, to fall behind 3-2 in the series, we went home and set that shirt on fire, exorcising the demons of the series. 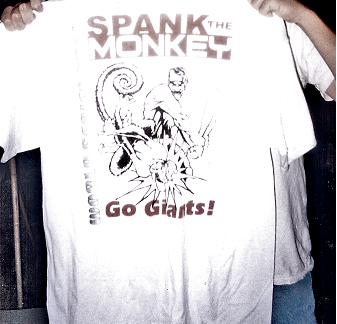 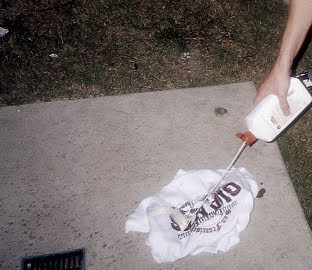 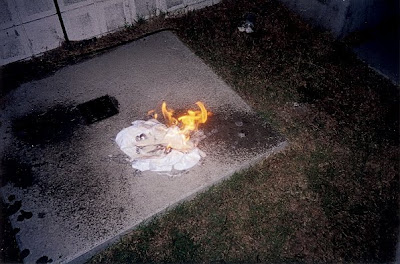 The Angels came back to win the final two games of the World Series, capturing their first and only championship. Obviously this was because of me. So Monday morning, after the Lakers had fallen behind the previous evening to the Celtics, to face a 3-2 deficit of their own, I had an idea.

Is that Celtics jersey still at my parents' house? It has to be... right?

Sure enough, it was there, rumpled up in a drawer. (Not that this surprised me; it's not like I still wear the thing regularly and there was a chance it was at the dry cleaners.) I took it outside and set it ablaze. 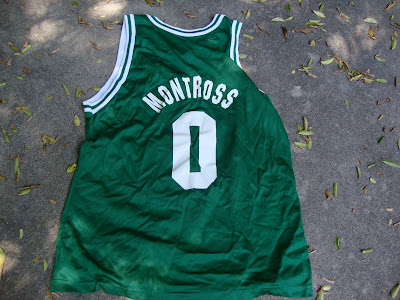 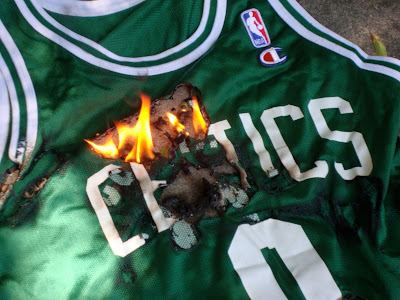 It died a hero's death.

Oh, wait, this is a blog about food, isn't it? I made nachos for the game. They were good.
Posted by JustinM at 7:52 AM

We were trying to figure out at work today why you guys out by LA like to run amok for everything...wouldn't you want to run amok if they lost rather than won? I guess this is a whole new level of fan that we must get used to.

I would probably be more apt to destroy things after a loss. But usually that's the remote control (although once I broke my phone in half after an Angels loss in the playoffs).

But the idea of destroying someone else's property would never occur to me, nor to any of my friends. But these people you see on the news aren't really doing it because of the Lakers win; they are doing it because they are trash who look for any opportunity to destroy other people's property. Although many of them were wearing Lakers gear, I doubt they are actually real fans. Every real fan I know was watching postgame shows and savoring the moment.

The Lakers victory was the excuse these thugs used to start trouble, but it was not the reason.

Never heard of Eric Montrass from the 1990's. Come to think of it, never heard of the celtics in the 90s either!

My fav Nachos are simpler, and I get them at Pepe's. Nearest one to us is on Rosemead Bl in TempleCity.

He was a big, not terribly fast white guy who was very effective in college (he won a title with UNC in '93) but whose game didn't carry over to the NBA. If you know Adam Keefe, Cherokee Parks, Greg Ostertag or Todd MacCulloch, you know the type.

I have not been to Pepe's. Someone wrote on the blog last year that they have the best chili cheese fries and I remember wanting to go, but I have not... yet.