The Slaw Dogs V and VI 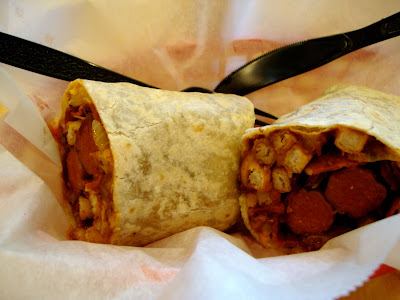 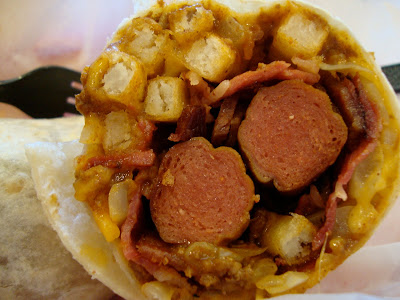 It's been a while since I've written about The Slaw Dogs. My trips there have slowed down, no question. There have been several times I have driven by with the intention of eating there but the lines snaked down the street and I went somewhere else. Now that the weather is nicer it's more fun to eat outside at In-N-Out, where, let's be honest, the food is just as good and half the price. But mostly I just couldn't keep going to Slaw Dogs as much as I did when it opened or I knew I would get sick of the place. ("I must confess/ I could use some rest/ I can't run at this pace very long")

Not long ago I did a favor for my mom, running something by her work, and she suggested we meet my dad in Old Town for lunch. He wanted to try Big City Hot Dogs. I'd read a few things about the place - just enough to know that it didn't interest me. My friend Tracie ate there and reported that it was nothing more than average, and it was damned with faint praise by Ben over at the sky is big in pasadena, that treasure trove of daily photographs of Pasadena. I said we should try someplace else instead.

So (without my input) it was decided that we would go to Slaw Dogs. That was fine with me, I'm always up for a hot dog. There was one left that I had yet to try: the "TNT," a 10" dog stuffed into a burrito with chili, cheese, grilled onions, french fries, bacon and pastrami. It was delicious and I ate it a little too quickly. "Do you want another one?" my mom asked me. I'm not going to lie: I kind of did. But I knew I shouldn't, so I just munched on a few fries. And hour later I was very glad I hadn't attempted to eat a second TNT. 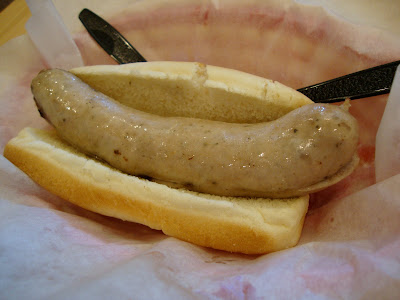 My dad - this was his first trip to The Slaw Dogs - ordered a beer bratwurst with nothing on it. "You don't want any toppings?" I asked.

He loved it, and after eating it he went up and got another.

"This is delicious," he commented. "Toppings only would have ruined the flavor." 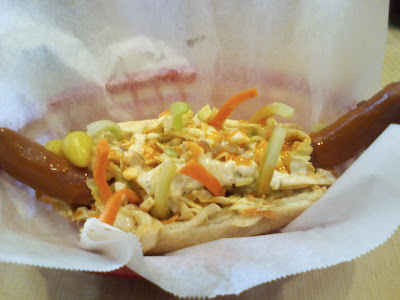 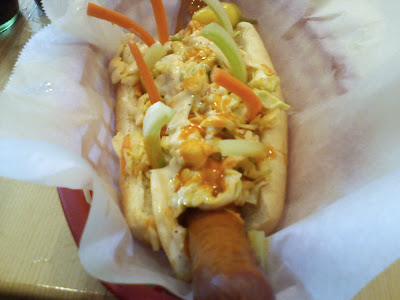 On Sunday, a couple hours before we headed down to Chavez Ravine, Elizabeth and I wanted to get a quick bite. A week or two earlier she mentioned that she hadn't been to Slaw Dogs in a while and wanted to return. So I suggested we give it a try. It wasn't terribly crowded and we were able to place our order within five minutes of entering. (I didn't have my camera with me so I had to use my phone; that's why the pictures aren't particularly good.)

Elizabeth ordered the Picnic Dog - the hot dog I'd eaten on my first visit to the place - and she liked it, although there was too much barbecue sauce on it for her to love it. I opted for the special: a Buffalo Dog, with slaw, blue cheese dressing, buffalo wing sauce, carrots and celery.

The dog was delicious, although the bun seemed comically short. I understand that I ordered a foot-long hot dog and it was probably going to be too long for the bun, but when the dog is covered with these great toppings - and costs seven bucks - it would have been nice to have a longer bun (like the Dodger Dogs we ate later that day). There was no way to spread the toppings onto half the dog.

It might be a few more weeks before my next trip to Slaw Dogs (unless they come up with a menu special that I can't resist), but I know the next thing I want to try: kimchi sweet potato fries.
Posted by JustinM at 10:30 AM

Thanks for the shout out! It will be interesting to hear your thoughts on Big City Dogs (if you ever make it there).

I walked by Saturday and it smelled really good... but I don't see it in my future. I don't mind buying a hot dog somewhere with fries, pastrami and bacon on it, because I can't make that at home without buying a bunch of stuff at the store and doing a lot of cooking.

But a hot dog with ketchup, mustard and relish? Or chili and onions? I could make that right now with what's in my kitchen. I won't, because it's 9 in the morning, but... actually, that's does sound like a pretty good breakfast. Gotta go now.