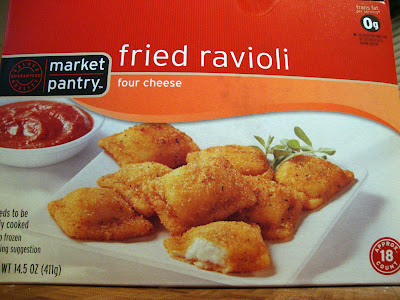 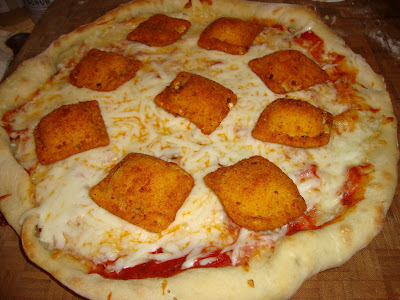 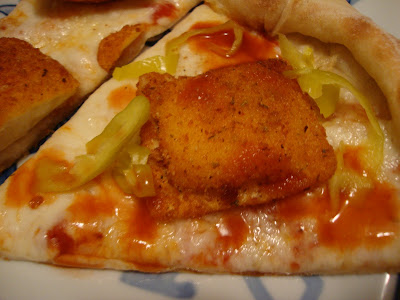 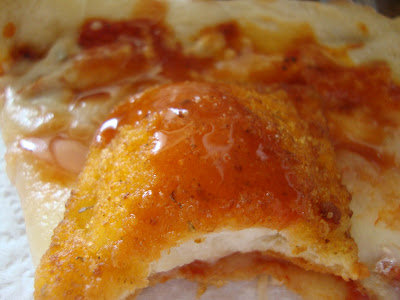 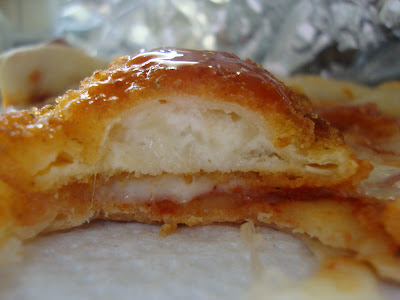 Elizabeth and I are big fans of Target; it's rare that more than two weeks go by without us making a visit, for everything from cleaning supplies to cat toys to DVDs. Their selection of books isn't big, but new releases are always discounted. They have an impressive amount of supplies for the kitchen. Heck, the jeans, sneakers, and button-down shirt I am wearing at this very moment all came from Target. I love the store. But one thing I have never bought - nor even looked at, I think - is their food. Every once in a while they have soda on sale for a good price and I grab a few 2 liter bottles, but I have never bothered to look in their freezers.

The other day I did, and noticed a package of fried ravioli. That's something I haven't thought about in a long time. When I was a teenager, Jack in the Box had toasted raviolis that were one of my favorite fast food items ever. But I don't think they've offered them for at least a decade, despite my letters to Jack to bring them back. 8 years ago in St. Louis - which claims to be the creator of the item, although I don't have any idea if there is actual proof of this - I had an order of toasted raviolis that were fantastic. That was the last time I'd eaten them.

So I bought the box. I mean, it's breaded and fried cheese, right? It's not like it can be bad. (Of the hundreds of orders of fried cheese I have eaten in my life, only one can be described as bad: an order I ate a few years back at a restaurant on Colorado Blvd in Old Town.) I figured I would stick them in the freezer and eat them at some point down the road.

Last night I was making a pizza for dinner when I hit a bump in the road: a lack of toppings. I thought there was some pancetta in the fridge, but I was wrong. The basil that I had briefly glanced at turned out to only have a couple fresh leaves; the rest had turned to sludge. OK, I guess I'm making a cheese pizza. At least I had several kinds of cheese.

Then, while rolling out the dough, I was hit with the kind of culinary epiphany I used to get all the time but rarely do anymore, the kind of this-could-be-good-or-this-could-be-horrible inspiration that once led me and my friends Tom and Zach to take every item in our fridge, roll it into a ball and fry it. I would put fried ravioli on the pizza.

"Um," Elizabeth said, getting that look in her eye that sometimes happens when I suggest we make our own moonshine or watch Wild Hogs all weekend. "How about you just make it on half?"

I heated up the oil and threw in several pieces of ravioli while the pizza was cooking for a few minutes in the oven. They took just a couple minutes, I removed them, added them to the pizza, and finished baking it.

I'm not going to lie: it wasn't particularly good. But I'm convinced the theory is sound. The problem is that the ravioli is quite bland. The breading on it has no spice and the inside is a runny mess of creamy, flavorless cheese. If you get a plate of good toasted ravioli, it is full of flavor and needs no accompaniment. These were clearly meant to be dipped in some kind of sauce. They are an appetizer to serve at a party or while watching a ballgame; they are not something that should be the main attraction at dinner time.

To give it some more flavor, I added pepperoncini to my slices and doused them liberally with Texas Champagne hot sauce. This made it much better, but still one of my more disappointing pizzas. I will never make this again, although I would not be opposed to trying the ravioli again in some other situation.
Posted by JustinM at 9:50 AM

Justin, poor Justin.
At first I'd thought that you'd lost your ever-lovin' mind. But then it all began to make sense - your penchant for fast-food (no matter how hideous) and your creativity with pre-packaged foods all indicate real potential for you as a fast-food magnate in your own right (not 'write' as you are here)...

Woah! I was trying to decide what to make for the Lakers game tonight... a garlic and basil pizza burger? I wonder, would that work? What kind of wine would you serve with that, T?

I'm thinking a wine that either comes in a box or with a screw top.

I was thinking something we made in the bathtub, but then again you always were the classier one.

A 5 year old Turkish Buzbag is just the thing!

The best slice of pie I've ever had was from a by-the-slice shop in Amherst, Mass called Antonio's. It was a plain cheese slice topped with cheese tortellini. The difference between tortellini on your pizza and toasted raviolis is so minimal that I know your theory is sound. Keep trying!

That Elizabeth sounds smart. While most of your concoctions come out well, this one I was not ready to participate in.