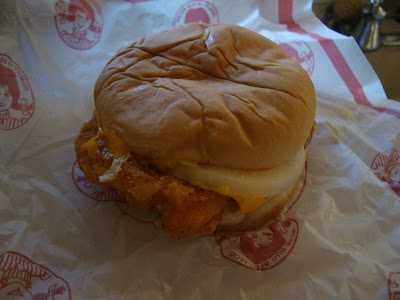 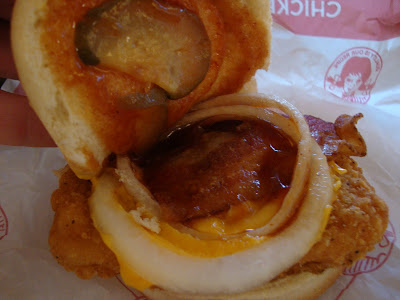 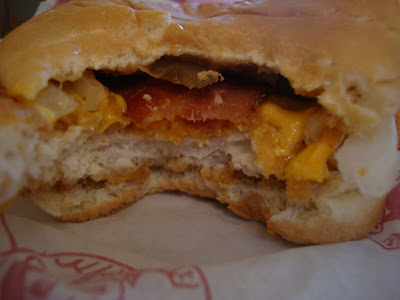 I will be the first to admit it: there is nothing that looked particularly special about this sandwich. I saw it advertised on TV a couple days ago as part of a $2.99 value meal, an obvious attempt to compete with the recent spate of bargain offerings as fast food restaurants, like McDonald's "Mini Meals" or Jack in the Box's "Pick 3 for 3 dollars." It looked for all the world like their 99 cent chicken sandwich, splashed with some bacon, onion and barbecue sauce. It's not that I didn't think I would ever get it, it's that it vanished from my memory about ten seconds after I saw the ad.

Then Monday evening hit, that inevitable end-to-a-three-day-weekend feeling where it dawns on you that the weekend is over. The last thing I felt like doing was making dinner. I decided to get Wendy's, come home, and relax for the rest of the evening. Sitting in front of the drive-through speaker, perusing the menu, I noticed the sandwich from the commercial.

"Sure," the woman said. "Hold on." She did not talk again for almost two minutes. Apparently she did not know how to charge for just the sandwich when it's not part of the combo. Eventually she figured it out.

The sandwich was only $1.69. (I also got some of their spicy nuggets, for 99 cents.) I took it home and unwrapped it. Sure enough, it looked exactly like the value menu chicken sandwich with bacon added. Whatever, that's what I was expecting.

It was surprisingly good. I have written many times that Arby's is the only fast food place where I actually enjoy the bacon, but this sandwich's bacon wasn't bad. I ate all of it. Would I get this again? Probably not. The sauce is the Wendy's hickory barbecue sauce that I don't really care for and the onion added nothing to the sandwich. I will just stick with the regular chicken sandwich.
Posted by JustinM at 12:01 PM

The new Wendy's bacon is a definite improvement I was kinda skeptical about this sandwich at first, but after reading this, I'm going to give it a try or maybe I'll just try the new burger. Thanks for posting this.

What is your favorite fast food chicken sandwich?

Jason: No problem, you're welcome.

Mikey: I would say the Arby's crispy chicken sandwich. Their chicken quality is a few notches above most. However, Chick-fil-A is coming out with a spicy chicken sandwich this weekend that deserves its day in court!

I can't put into words how hideous this sandwich looks - as though my dog made it.

I think that Wendys has some ok burgers but I will eat just about anything that involves bacon. You just can't beat that stuff!

Tim: I can't argue with you... it does look gross.

Jonas: Once when you were little I was trying to get you to eat breakfast but all you wanted to do was play video games. I said "Come eat" and you kept saying "No! I'm not hungry!"

I said "I made sausage and bacon" and you immediately said "Ok, I'll have some of that."

So you decided to get Wendy, come home with her, and then "relaxed" for the rest of the evening!

Well, for that bargain price you had no choice but be left satisfied by Wendy. Looks can indeed be deceiving. I'm glad it tasted good.

Yeah, Wendy didn't look like much, but after a few beers, you know, I decided to go for it. Why not?

Elizabeth made me have it in the other room, though... she wouldn't let me bring Wendy to bed with me.