I Give Elizabeth Crabs 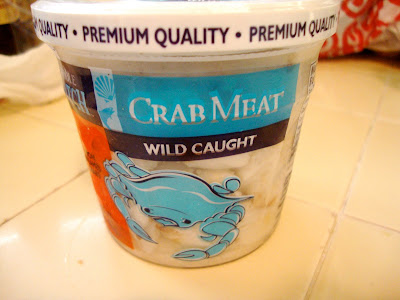 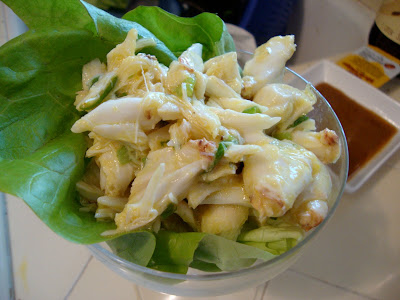 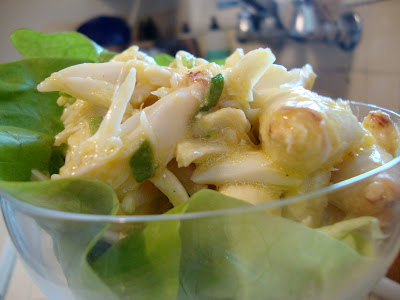 I've been feeling particularly blessed as a sports fan this month. The Angels swept the Dodgers for the first time ever at Dodger Stadium. USC football finally got punished for what everyone knew all along: there was something shady going on with their great football teams of the mid-decade. I'm not a big soccer fan, but it is impossible not to get caught up in the majesty of the World Cup. And the Lakers won a second consecutive championship - I'm 31 and they have now won 10 titles in my lifetime - by beating the Celtics.

Last night was a continuation of this great month: hearing Vin Scully call an Angels game. Very few things are better. (A few times last night I turned away from the Dodgers coverage of the game to the Angels telecast so I could hear the stunningly boring Angels announcers call the game for a couple minutes, just to appreciate the difference.) So it was a night for something very simple for dinner.

Elizabeth and I both love crab, so to surprise her I got a container of jumbo lump crab meat from Whole Foods. I mixed up a vinaigrette of mustard, green onion, olive oil and vinegar and tossed it with the crab, serving it in a glass. It is very simple and incredibly delicious; the tart, spicy sauce is a nice contrast to the sweetness of the crab. 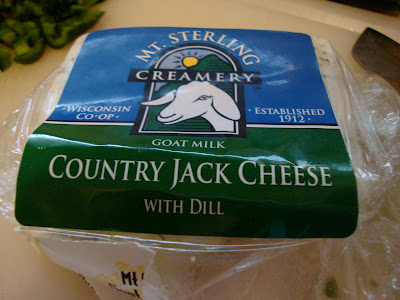 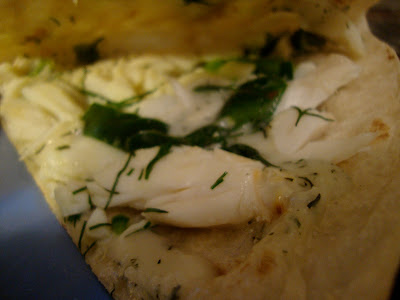 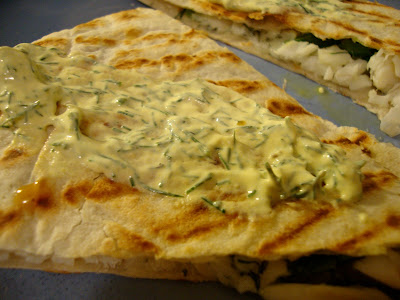 Very few foods I know of elicit such love-it-or-hate-it opinions as dill. Elizabeth and I both love it. (Our friends Murph and Tim both hate it, and the mere mention of it makes them look like they're going to be ill.) We had a jack cheese with dill in the fridge, which I chopped up and put in a tortilla with a handful of the crab meat, some diced jalapeno, and a few sprinkles of dill.

I grilled those for a few minutes on each side, then spread a sauce of mustard, sour cream, and more dill on top. We loved the quesadillas, but they were quite dill-y, obviously. If you like dill and crab, you would have loved these, too, but if not, it would have been one of the worst foods you've ever eaten.

And the Angels came back from being down by three runs to beat the Dodgers once again.
Posted by JustinM at 10:31 AM

You know I love you and your blog brother, but why the zinger about my beloved Trojans? Shady recruiting takes place at all schools, even at the public school across town. In any event, I digress...
I was checking on WebMD to see if dill was a cure for crabs but I didn't find any mention of it...

Because UCLA has gotten nailed in the past and USC has skated by... until now. DeShaun Foster BORROWED an agent's car and was suspended for half of his possibly Heisman winning season. Reggie Bush and his family received hundreds of thousands of dollars with no repercussions.

Nikola Dragovic played on a team in Europe with players who received money - nobody alleges he got a cent himself - and he was suspended. OJ Mayo received thousands of dollars in cash. Again no repercussions.

So now the bill is finally due for USC, and I am happy about that. You would feel the exact same if the situation were reversed.

An aside re: Vin Scully - I was a Vin Scully fan before I was a Dodger fan. As a matter of fact, I'm not really even a Dodger fan; I'm a Vin Scully fan. His voice on the radio is one my earliest good memories and we're all soooo lucky that he has survived so many years so that others through the last four generations have been able to hear this great artist at work.
Yuck, dill.

That is correct. He may have slowed down a little, but he's still better than anyone else in the game. Listening to the Angels guys - Mark Gubicza and Victor Rojas - is almost painful. They barely seem like they're even watching the game.

The most excitement you ever get out of Gubicza is when he immediately tries to answer the Aflac trivia question. (Hey, asshole - those are asked so the fans can try to guess the answer, not for you to immediately answer. Not that I expect you to give a damn.)

I have long said the best thing about interleague play isn't the opportunity to see other teams (like I really care about seeing the Angels play the Cubs), it's the opportunity to hear Vin call a few Dodgers vs. Angels games every year.

I'm not even much of a baseball fan and I adore Vin Scully. Anyone who grew up in L.A. and doesn't love him has no soul.

When I was a teenager and much more of a Dodgers fan than I am now - the Piazza, Karros, Nomo, Chan Ho years - Vin did innings 1-3 and 7-9 on TV, and he would call innings 4-6 on the radio while Ross Porter took over the TV announcing duties.

My friends and I would always turn down the TV and turn up the radio in those middle innings so we could hear Vin. He would repeat all the anecdotes he had already mentioned on TV, but that was a small price to pay for us to hear him call those extra 3 innings.

You should link up with the vinscullyismyhomeboy.com blog...

I know it's too late cause the Trojan culprits have moved on to thier respective pro circuits, but I would've been okay with them recieving individual punishment (as in the UCLA examples above)... but to jack a bunch of players who had zero to do with it isn't at all comparable.

I certainly agree with that. Bush should have been ineligible for the 2005 season. It is definitely unfair to punish the current team when Bush and Carroll have moved on.

However, it would be even more unfair for there to be no repercussions, particularly when Mike Garrett is still running the show and saying smug things like "nothing but a lot of envy."

1. Wake up, brush teeth, and continue to live in own reality.
2. Jump in my Benz, speed down the 110fwy and cut people off on the way to work and never acknowledge them because they don't exist.
3. Begin drinking highballs like they're going out of style.
4. Call personal assistant and make sure she puts drink in coffee cup on speakers podium before I arrive.
5. Finish contents of said coffee cup.
6. Utter something smug and out-of-touch.
7. Leave.

yo PP- is that a tub of McD's hot mustard in the background of the 2nd pic? just wondering.

Sure is. That's one of my favorite fast food condiments anywhere. (Also in view: a small sauce dish of Salt Lick's spicy mustard barbecue sauce, and a bottle of Tejava iced tea.)

I've told you before how much I love your blog. Where else can you find VD jokes, Vin Scully tributes and ripping on the University of Spoiled Children?

I actually have FAR more friends who are USC fans than UCLA fans, though. I mean, probably twice as many. Most of them are pretty good people. Well, some of them...

Another win for the Angels last night, although I must confess it was one of the less thrilling victories - they were the beneficiary of a couple blown calls against Dodgers, as well as some of the worst base-running you will ever see. (I got an annoyed text from my friend Bryce after the game ended, reading "little leaguers run the bases better!")