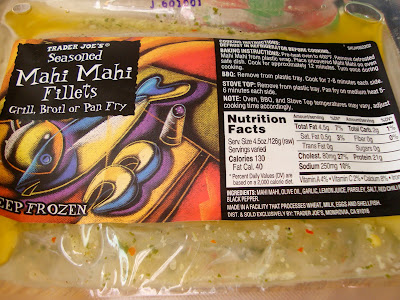 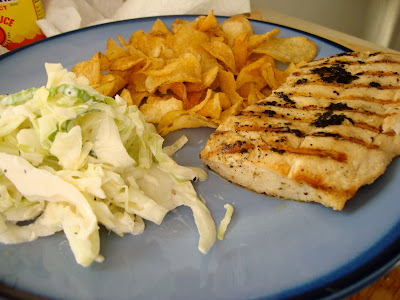 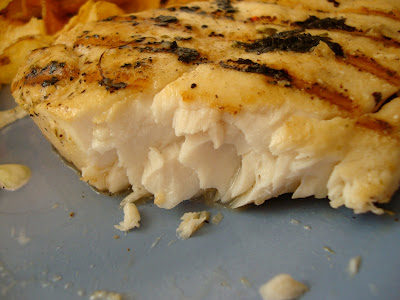 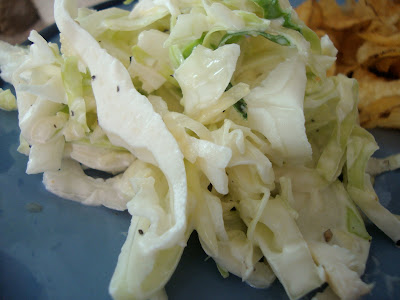 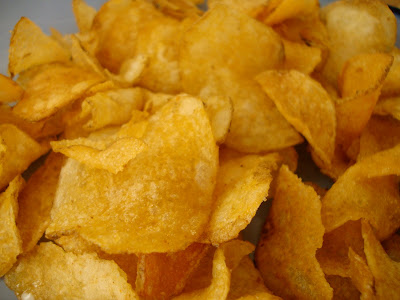 Trader Joe's once again comes through with a great, easy to make product: seasoned mahi mahi fillets. Mahi mahi has been my favorite fish for a few years, so when I saw a package of it in the frozen section of TJ's, vacuum sealed in a package with olive oil, garlic, lemon juice, parsley, red chili and black pepper, I thought it would be good to grill for dinner.

I took it out of the freezer and let it thaw in the fridge overnight. Once the grill was hot I threw the fish on, cooking it for about five minutes on each side.

I had a package of shredded cabbage and I made a simple cole slaw - mayonnaise, vinegar, a few drops of olive oil and a generous amount of fresh cracked pepper. The second thing I ever started making myself, when I was 20 and first got into cooking, was cole slaw. I found a recipe online for cole slaw that I thought sounded good so I made it for a party, and more than a dozen people told me it was the best cole slaw they'd ever had. I do not remember if I told them it was a recipe I'd found or if I tried to pass it off as my own. (My guess would be the latter.) I used to make it frequently (and everyone said it was amazing), but it calls for about a dozen ingredients, so I've found that this scaled-down version of it is easier - especially when I'm just making it for one or two people.

I also wanted some potato chips to go with this dinner, so I went by Whole Foods to look at their selection. They had a bag of Terra chips in a new "General Tso" flavor with a $1 off coupon adhered to the bag, so that's all I bought. The total at checkout, with the coupon discount, was $1.86. I'm reasonably certain that's the smallest amount I have ever spent at Whole Foods. I heated the chips in the oven, at 350 degrees for five minutes, to warm them up and release some of the oils. They were very good.

The fish was outstanding - tender and very juicy. The lemon flavor was almost overpowering so I added more black pepper to it. If I had been serving this to guests I would have melted some butter on the fish as it grilled, but I was trying to make it somewhat healthy.

I will definitely try this mahi mahi again, perhaps even chopping it up and serving it in tacos next time.
Posted by JustinM at 11:23 AM

That looks delish, and what's more, it looks like something I could make without screwing up.

I came across your blog tonight while searching for mahi mahi burgers online. When I was at a local Trader Joe's last weekend, I was very disappointed to see that they were out of stock and was told they may not get any more in until summer. I did pick up the mahi mahi fillets and am looking forward to trying them.

Hi CJ. Other than fast food promotions, the thing that leads people to my blog more than any other (by far) is searching about Trader Joe's products.

I wonder if they won't get any more at all. That seems to be the way it goes with products that I really like - empenadas, chimichurri sauce, chicken chili verde. They say "Oh we're getting a new supplier" or "They are retooling the recipes and it will be back in a couple months"... and then the product never returns. I hope that's not the case, but that is how it usually goes with Trader Joe's.