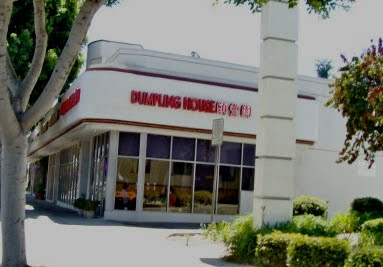 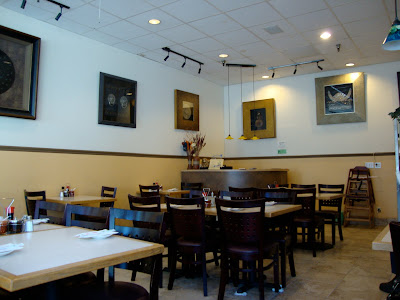 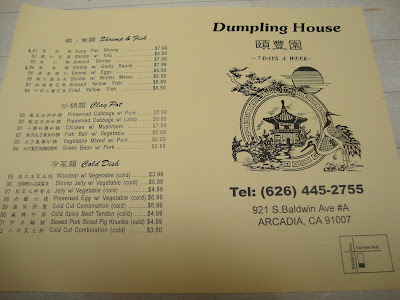 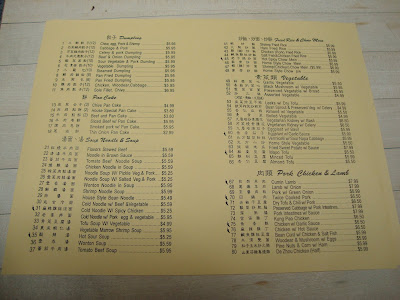 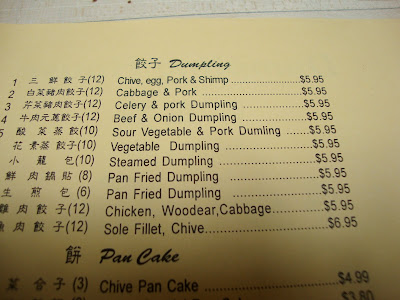 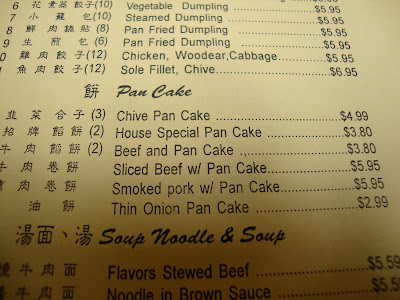 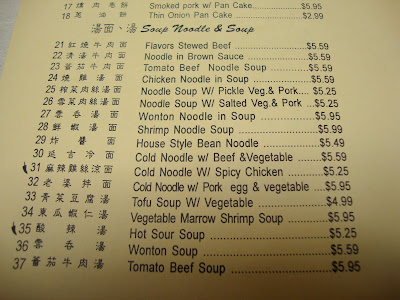 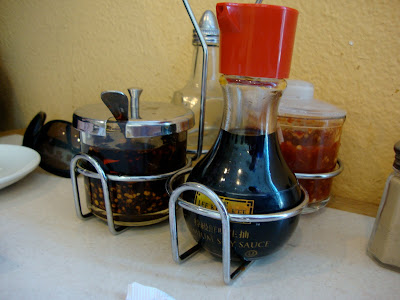 Dumpling House, in Arcadia near the corner of Fairview and Baldwin, is only a block away from Din Tai Fung, a fact you're reminded of in most reviews of the place. I had wanted to write about Dumpling House without mentioning its more famous competitor down the street. But it turns out that's pretty hard to do.

My friend Carla and I were meeting up for lunch and we both felt like dumplings. We'd previously mentioned going to Din Tai Fung - something we'd done together years earlier - but at the last minute I had an idea: why not give Dumpling House a try?

My reasons were threefold: first, and perhaps most selfishly, I wanted to have a new place to be able to blog about. Second, Dumpling House has a greater variety of items on the menu. And third, the last two times I have eaten at Din Tai Fung, I have been less than impressed. The juicy pork dumplings have still been great, but the other dumplings have been flabby and flavorless and the crowds have been annoying. (On my last trip I had to share a table with another group who did not say a single word at a volume below screaming.)

I sent my friend Bryce a text that I was going to try Dumpling House. I have different friends whose opinion I turn to on specific culinary matters. My friend Tim is my go-to guy on Mexican restaurants; my friend Zach is my barbecue guy. Kevin lived in Belgium for a couple years while he was on a professional cycling team so I always send him pictures when I'm eating Belgian fries. I often send texts to my brother when I come across a pizza that reminds me of King Arthur's.

But Bryce is who I consult about dim sum because he is my only Asian friend. I'm just kidding. He and his wife were the first people to take me to Din Tai Fung many years ago, and on occasion he still gives me tips about new dim sum places he has tried. He replied to my text, telling me that he's never been but a friend of his is a big dumpling fan and she doesn't think much of Dumpling House.

Carla and I arrived there at the same time in our separate cars. I waved to her and drove a couple hundred feet down Fairview and parked. She forgot or never knew a rule that has served me well: never try to park in a parking lot in Arcadia, it doesn't end well. As a result I had to wait in front of the restaurant for several minutes by myself. I sent Bryce another text:

"You're screwed," he replied. "They probably speak English, too."

There were only two other tables occupied when we entered, a welcome change from Din Tai Fung, although it also seemed a little too empty. We sat down and looked at the menu. Carla said I should just order whatever I thought sounded good. So I did. 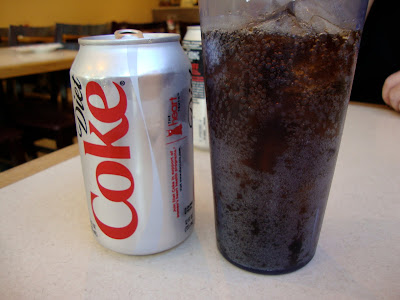 99% of the time I have dim sum, I drink one of two things: Tsingtao beer, or hot tea. But Dumpling House doesn't have any beer, and it was a very hot day, so I opted for a Diet Coke. 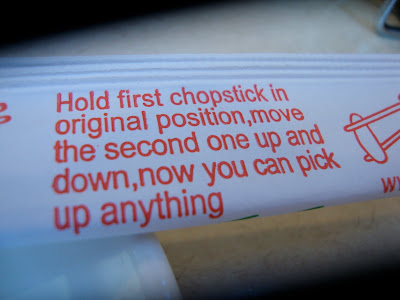 A girl walked by the window in the smallest miniskirt I have seen in years.

"I don't know how Elizabeth puts up with you," Carla replied. I did not argue, as I often wonder that myself. 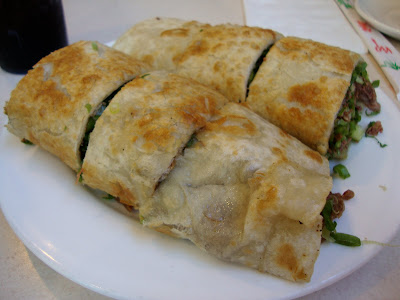 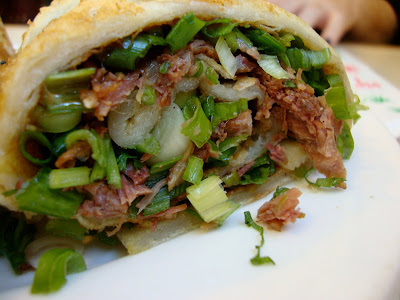 The first thing to hit our table was the beef pancake. This was spectacular. The pancake was crisp and hot and the beef and scallions inside were cool, an unexpected yet delicious contrast. I experimented with the different pieces, trying them with chili oil and with soy sauce and vinegar, but really it was so good it did not need any accompanying flavors. This was one of the best things I have eaten in 2010 and I decided while eating it that even if everything else was lousy, I would still be returning to Dumpling House. 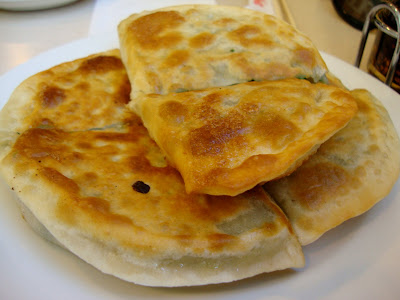 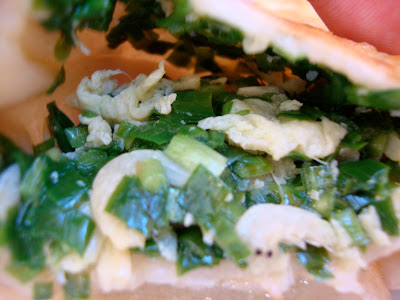 Our next entree was the chive pancake, this one a more flat pancake than the previous dish, but also bursting with ingredients. This was good, but the chive flavor was completely overwhelming. Now, I realize I cannot order something called a "chive pancake" and then get upset at the overbearing taste of chives, but it was still too much. I took one piece home with me, however, and reheated it later with some hot mustard, which balanced out the chive flavor quite nicely.

"This was good," Carla said, "but next time I would rather try the onion pancake." 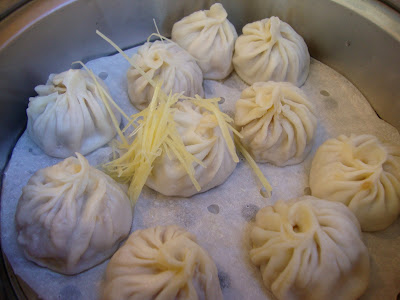 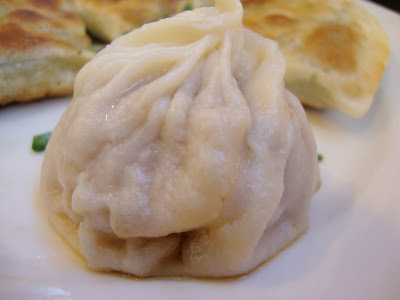 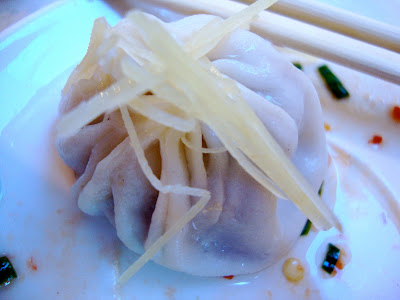 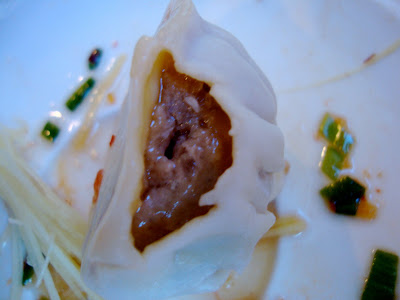 Next were our juicy pork dumplings. They certainly look like Din Tai Fung's dumplings when they arrive, but a comparison doesn't quite seem fair: Dumpling House's juicy dumplings are thicker skinned, with more meat and less juice, served at a lower temperature. If you want a thin dumpling with blisteringly hot juice and not much else, then Din Tai Fung is for you. If you want more pork flavor and a dumpling that you don't have to stare at in the steamer for three minutes before it's safe to eat, Dumping House is your best bet. If you want your dumplings to look like a scrotum, either location is fine.

For me? I would say I like Din Tai Fung's dumplings more. I tell you what, we'll come back to that. 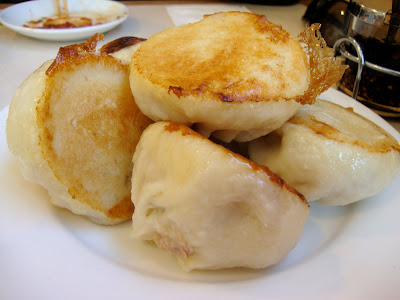 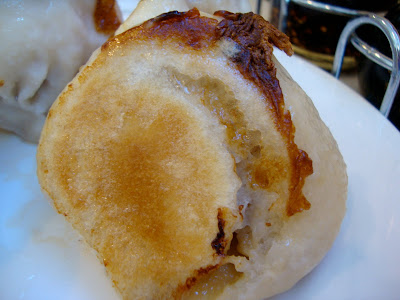 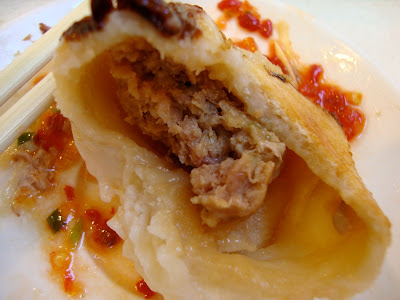 It turns out they were the latter. They took about twenty five minutes to come out, a surprisingly long time. Carla wanted to ask for a fork but I told her the fun of these is trying to eat them with chopsticks. They were very flavorful but I still added some chili sauce to them. I am not sure if I would order these again; I think I will try the potstickers next time. If nothing else, they will be more manageable to eat. 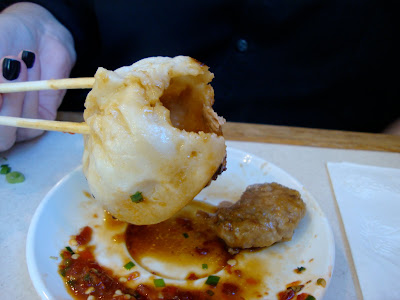 Carla twice lost the pork out of her dumplings. She claimed this was my fault since I would not let her use a fork. I suppose she has a point. At any rate, whenever I eat dim sum with people from now on, I will refer to this as "pulling a Carla."

Overall, I really liked Dumpling House and I will certainly go back. A couple of the dishes weren't great, but were still better than average. The one dish that was superb, the beef pancake, was so good that I will always order that on subsequent trips. I look forward to trying the smaller pan-fried dumplings and the chive, egg, pork and shrimp dumplings.

Carla bought me lunch but not before I saw the bill: the total for all the food and three Diet Cokes was $27. And we both took plenty of food home with us, enough for me to have a complete meal for dinner. So Dumpling House is certainly a better value than Din Tai Fung.

I know I wrote that I liked Din Tai Fung's xiao long bao better than Dumpling House's, and I will certainly miss the green beans with garlic if I forsake Din Tai Fung, but overall I like Dumpling House more. The variety of items and the fact that a twenty to sixty minute wait isn't required (actually, my record at Din Tai Fung is two and a half hours) are enough to persuade me to make Dumpling House my go-to location for dim sum in Arcadia.
Posted by JustinM at 9:18 AM

That beef pancake has me considering chinese food for breakfast. it looks uh-may-zing.

Dude you make me laugh.

I knew there was a logical explanation why you like XLB dumplings so much...

The beef pancakes are good with a little hoisin sauce! Try it next time!

This is nearby to Din Tai Fung. I need to try it one day.