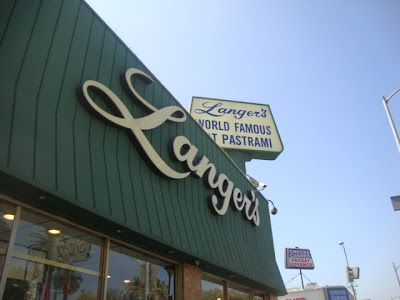 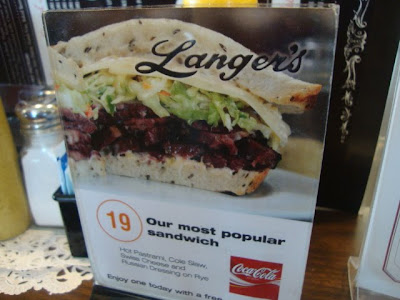 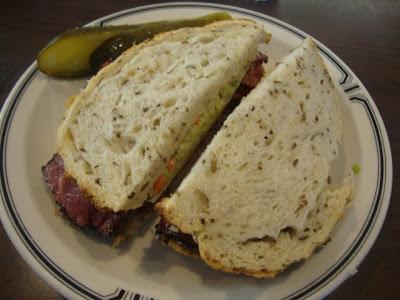 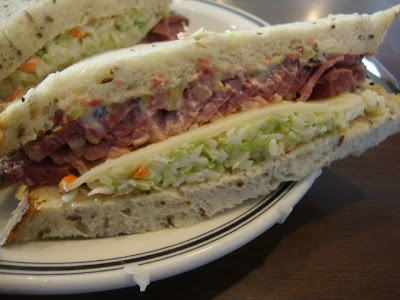 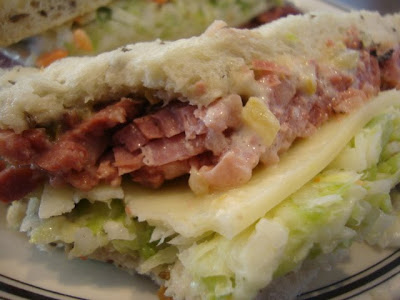 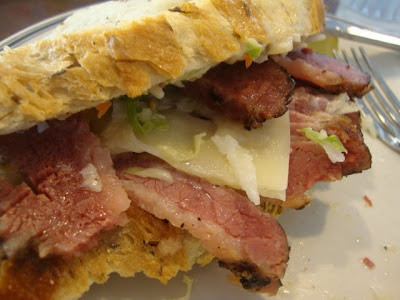 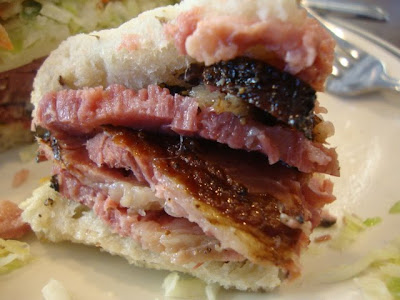 My world could wait no longer.

But I never did. I knew I would probably like it, it was just one of those things I never had the motivation to do. I've never been to Hawaii. I've never seen any of the Lord of the Rings movies. I've never ice skated. I'm sure all those things are great, but I doubt I'll ever do any of them. I just don't care.

After a conversation with two friends - both lifelong Angelenos - who promised me I would love Langer's, I considered going for lunch a couple months ago on my birthday... but then the day came around and the idea of sitting at a sidewalk table at Green Street Tavern and wandering around Old Town sounded better.

But two things happened this week. Jonathan Gold, who has repeatedly stated that Langer's pastrami is probably the best in the country, wrote in the L.A. Weekly that he would choose Langer's to cater his funeral. (He was answering a reader's question; it's not as macabre a statement as it seems.)

That same day I wrote a post about Jack in the Box's "Pastrami Grilled Sandwich," a godawful brick of fat and rubber that can't possibly contain "only" 32 grams of fat, as their website claims. That post inspired several comments about pastrami (and relief pitching), including an offer from my friend Tim to take me to Langer's on Friday. It appeared I was out of excuses.

I received a few emails from strangers telling me what to order, what time to go, even where to sit in the restaurant. A good friend sent me a picture message of the sandwich he had at Langer's a year ago and called it "good, not great." Another friend shot me a text that their crinkle-cut fries are fantastic. (Although I knew there would be no way I would leave room for fries.)

We got down to Langer's, on 7th and Alverado, around 1 in the afternoon. I've driven through this part of town many times but I don't think I've walked around here in at least a dozen years, since the teenage years when my friends and I would come down here to get fake IDs made. There was a line of people out the door and down the street but Tim assured me it would move fast. And indeed it did; we only stood outside for about two minutes before the hostess told us that if we didn't mind eating at the counter we could go right in. We did not mind, not one bit.

The place is busy, no question about that. At any given time there are at least a dozen customers moving around, walking to tables, changing tables, getting food to go. A small army of cooks stand behind the counter, constantly cutting meat and plating food. The inside hums with the same vibe of every great diner I have ever set foot in, although as far as I could tell two topics were most common on this afternoon: what to do for Yom Kippur and what to do about the Dodgers.

The #19 is the best-seller here: pastrami, Swiss cheese, cole slaw and Russian dressing on Rye. I often like to ask the server what his or her favorite item on the menu is, knowing that just because something is the best-seller does not necessarily mean it's the best item. But that sandwich sounded really good so I ordered one. Tim ordered a pastrami on rye with nothing else.

"I got the #19 here once," he commented, "and I was scolded by my dining partner. So now I just get the pastrami. But really you can't go wrong with either sandwich."

The food was ready in just a few minutes. The waitress approached us with two plates, laying the pastrami-and-nothing-else in front of Tim.

"For the purist," she said.

So I received the other plate, the #19. I took a couple hasty pictures and took a bite. I would never call myself an authority on pastrami, but all it took was the first bite - encompassing a piece of the crispy crust and soft rye along with all the insides of the sandwich - for me to realize it was the best pastrami sandwich I have ever had. Thick and tender, juicy and peppery, it was one of the ten best sandwiches of my life.

The most common complaint I have read about Langer's is that their pastrami is too fatty. That is my number one pet peeve about pastrami and I am always quick to dismiss a sandwich when it contains too much fat, but this sandwich had very little of it.

Tim sawed off a piece of his sandwich and gave it to me. I squeezed a tiny amount of Gulden's mustard on it and took a bite. It was spectacular, too. I took another bite of my sandwich. Then ate the rest of the piece he'd given me. I could not decide which I liked more.

"That's amazing just by itself," I said.

I finished off my sandwich. Part of me wanted to devour it as quickly as possible, as it was so wonderful. But part of me wanted to eat it slowly, savoring every bite. I reached a happy medium and was a little sad to see that last bite go. I picked up a pickle to take bite, revealing a hidden chunk of pastrami about the size of a dime. My heart leaped. I woke up on my 18th birthday to news that the Lakers had signed Shaq and the knowledge that I could now legally buy porn. I didn't think I could ever have a happier moment. But here it was. I ate that last piece of pastrami like it was the last morsel of food on Earth.

The total for both our sandwiches - and the Dr. Brown's black cherry soda that Tim drank - was 33 dollars and change. The second-most common complaint I hear about Langer's is that it is too expensive. It certainly isn't cheap. But too expensive? I would not call $15 too expensive for one of the best sandwiches I have ever eaten. Would I eat it every day if the option were available to me? Probably not; that would add up quickly. But for an occasional sandwich it is not too expensive.

Like I wrote earlier, while I love good pastrami, I would not call myself an expert. But I have been to Katz's and the Carnegie Deli in New York and Canter's here in Los Angeles, and this sandwich from Langer's was the best pastrami I have ever had.
Posted by JustinM at 10:29 AM

I can't wait to try this place! I'm not authority on pastrami, but it looks delicious.

Better than Katz's?? Wow...them's some pretty brave words there, but i kinda do trust your taste a lot. So...im gonna have to figure out a way to get myself some langers...

Langer's is an institution.

On behalf of Langer's, we welcome you.

It's possible that this could replace my traditional In-n-Out burger and bottle of Napa cabernet birthday feast; but alas, not probable. If only Langer's were more convenient - it's probably a good thing.
The craving runs just as deeply though...

Liz, I'd love to treat you someday!

One of the best things about Langer's is their curbside service. So much better than any other takeout service I've experienced.

You call when you're 20 minutes out, place your order tell them the kind of car you're driving and how you'll be paying (either give them your cc # or the amount of cash you'll have on hand). When you pull up, no need to call. They spot you right away, bring your order out and have your credit card slip or change in hand. You can head out and be on your way.

Sometimes I'll make the trip down from West Hollywood, just to pick up a sandwich for lunch and head back to the office. Without the curbside service, it wouldn't be helpful.

Excellent info. I have a question: how does the food travel? I am not a fan of getting food to-go. But I would probably make an exception for Langer's if the food holds up.

Haha, yeah... I am always aghast when someone says they've never been to Langer's and they live in the area.

Then again, I once met a person who grew up in SGV and didn't know where the Staples Center was.

I love Langer's. . .great pastrami. I just wish they opened later - for dinner.