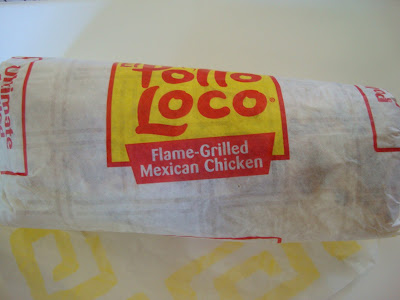 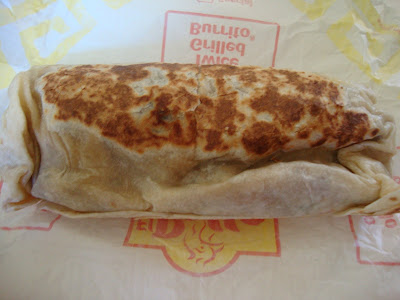 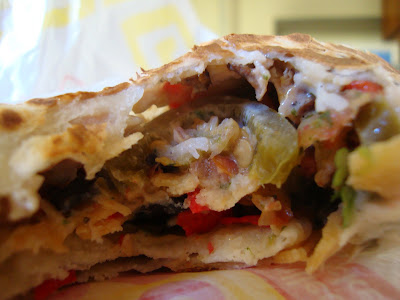 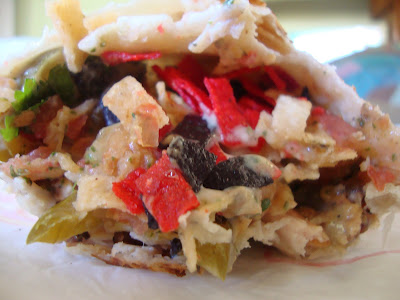 I'm not a big fan of surprises. But sometimes they can be pretty cool.

I was sitting at home yesterday afternoon, trying to decide what I was going to make for dinner, when I got a text from my friend Troy, reading: "Want to have dinner tonight?" I was confused; Troy lives in Dallas. And he usually gives me a heads-up when he is going to be in town. I thought maybe he was texting the wrong person.

It turns out he had just gotten into town for a conference and he was able to get out of plans last night that he had previously thought were required of him. I jumped at the chance to hang out with him; he is one of my best friends from high school and ever since he moved a couple years ago I only get to see him once or twice per year.

We made plans to meet up in Old Town for some happy hour drinks at 5. I got a text from him on the way up to Pasadena, claiming that he wanted to either have good sushi, good Mexican food, or go to El Pollo Loco, which has long been a favorite of his. Over drinks we talked about what to do for dinner.

"I thought you wanted good Mexican food," I replied.

He explained that every Mexican restaurant he has been to in Dallas serves the same variation of every dish, all layered under a pool of greasy cheese and topped with a red sauce that defies description. He wouldn't even get into sushi; he just shook his head with a look that I've come to understand means "Don't get me started." (The look was repeated when I asked his thoughts on Lane Kiffin. Troy is the biggest USC football fan I know, raised on it literally from birth - he was not named Troy by accident.)

Now, Troy is prone to exaggeration when he gets fired up. Over the years he has described various USC football teams as "not being able to beat a junior high flag-football team," he has called Trader Joe's "the greatest invention ever," and he has called Woody Allen "the least funny human being in the history of the universe." (Actually, I agree with him on that last one.)

So I knew the culinary wasteland that he described in Dallas probably is not entirely accurate and his claim that you cannot get grilled chicken in the city is probably not true. But still, if that's what my friend wanted, that was fine with me.

"How about if we get El Pollo Loco and eat at my place?" I asked. "There is one three blocks from me and I know Elizabeth would love to see you."

So a short while later I ordered an item I have been wanting to try for some time: the Queso Crunch Burrito. While I'm not the biggest fan of El Pollo Loco, the burritos they often come out with for promotions are usually really good. Years ago the "Fuego Grilled Burrito" - with chicken and "fuego chile orange sauce" was the best fast food burrito I have ever had. The Queso Crunch Burrito promised citrus-marinated chicken (although you can also order it with carne asada; I did not, as the place is not called El Carne Loco), jack cheese, poblano queso, crispy tortilla strips, salsa, and optional jalapenos, which, of course, I requested.

While waiting for the food Troy filled up no fewer than ten plastic containers with salsa and avocado sauce. It would have been an appropriate amount for three whole chickens, instead of the mere three pieces he ordered. He noticed me looking at him with amusement.

"You don't understand how much I miss this," he said.

The food was ready in only a couple minutes - by far the shortest wait I have ever experienced at El Pollo Loco - and three minutes after that we were back at my place. Unwrapping the burrito, I immediately noticed it was smaller than advertised. (There is a print ad for it where a guy is holding the burrito in his hand and it appears larger than a two-liter bottle of soda. In actuality it's about the size of every fast food chain's burrito you have ever seen.)

But it was quite good. The chicken was juicy and flavorful, the tortilla strips were a welcome - if somewhat unnecessary - contrast of texture, and the cheese was plentiful. And, something for which I appreciate El Pollo Loco, the jalapenos were actually spicy. (Burger King and Carl's Jr. could take lessons.)

Would I get this burrito again? Probably not. It was almost six bucks - not an outrageous amount, although I can think of a dozen better burritos in Pasadena alone that cost less than that - and would not have been filling by itself. (But I'd gotten some fries and popcorn chicken for the three of us to share as well, which turned out to be a good thing.) I just don't go to El Pollo Loco very much these days, and when I do there is usually a new promotional item to try, so on my next visit I will probably just try whatever that may be.

Troy polished off his three pieces of chicken in impressive fashion then leaned back in his chair with a satisfied grin.

"You don't know how much I enjoyed that meal," he said.

Hmm, Fritos on a White Castle burger and now a burrito laced with tortilla chips. I'm sensing a pattern here.
When I was a kid my brother and I lived on peanut butter sandwiches - not PB&J, just peanut butter and bread. That was until I got the idea of putting a few potato chips in the sandwich as well. Man, what an improvement!
So, needless to say, I approve!

I do enjoy a contrast of textures - as long as it tastes good. "Venezuelan" hot dogs, with potato chips crushed on them? Outstanding.

But once I made a quesadilla and put some spicy tortilla chips in it. That was terrible. I don't know what I was thinking.

That was a pretty good story, and my boss is very much into college football and trying to convert me into being a Cornhuskers fan..I think a foam cornhead is in my future.

"For a long time I couldn't decide whether the original settlers of Nebraska were insane or just stupid, and then I saw a stadium full of University of Nebraska football fans in action on a Saturday and realized that they must have been both."

We had a Huskers party last night and I have to say I have never consumed so much red alcohol in my life, they are kicking butt this season though so maybe it's a bit justified?

Dallas has El Pollo Loco though? Guess we must have not had them back in 2010 or something..