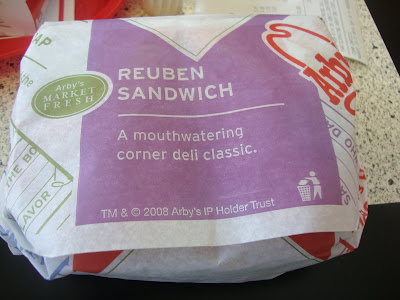 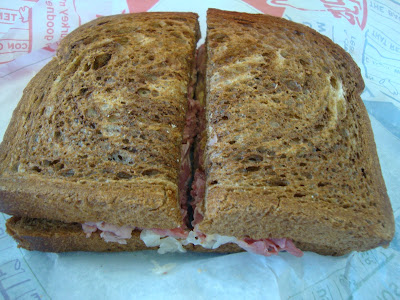 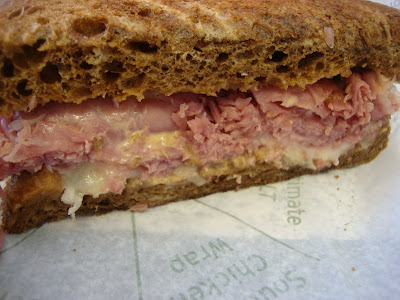 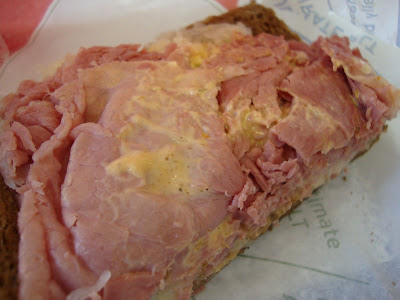 The pastrami sandwich I had the other day at Langer's was, as I wrote, one of the best sandwiches I have ever eaten. Sunday afternoon, Elizabeth and I were going for a drive, trying to come up with a lunch plan. I desperately wanted another of those pastrami sandwiches. But Langer's is closed on Sundays. So I suggested Arby's; Elizabeth loves their popcorn chicken and I figured I could try their Reuben sandwich for the first time and it would satisfy my pastrami/corned beef needs.

Raise your hand if you can already spot the flaw in my logic.

It took a few minutes to receive the sandwich. I sat it down on the table. "A mouthwatering corner deli classic," the wrapper read. Yeah, I thought. I'm sure that's what this will taste like. The first thing I noticed was that the bread was soggy. I doubted it would hold together long enough for me to finish the sandwich. (It would not.)

I can't really say that the pastrami was bad... but that's because I could not taste it at all. The only prevailing flavor was the sauerkraut, a mouth-puckering blast of sourness. Now, I love sauerkraut as a complement to food. But that's what it should be: a complement. When it's the dominant flavor, or, in this case, when it's the only flavor, I am disappointed. If that's all I wanted to taste I would save myself a few hundred calories and just eat a bowl of cabbage.

I pulled off a couple strands of the pastrami and ate them without any condiments. It still lacked flavor. Before I was done eating the sandwich, it mostly ended up in a few disintegrated lumps lying in the wrapper. But I didn't care. Soggy bread, bland pastrami, overpowering kraut... this sandwich was lousy.

Should I complain too much about the sandwich? Nah, probably not. Who orders something called a "market fresh sandwich" at a fast food joint anyway? But it does illustrate a point I make about value from time to time: it's not always synonymous with inexpensive. The Langer's sandwich may have been on the pricey side, at almost $15, but it was still a better value than this Arby's sandwich that cost one-third the price. I walked away from that Langer's lunch ecstatic. I walked away from this one thinking Why did I think this would be a good idea?

At least Elizabeth was nice enough to give me some of her popcorn chicken, which I liberally dunked in the Horsey sauce. 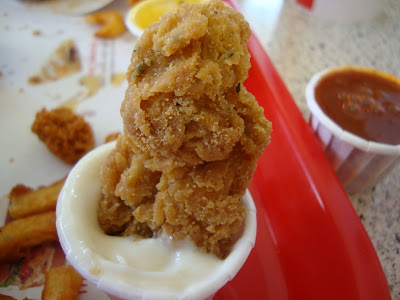 get the blt market fresh sandwich next time, PP. their bacon is good for fast food bacon and the bread is soft n yummy, too.

I see Jack in the Box is advertising pastrami sandwiches as well, I wouldn't get pastrami in this state personally...can't hold up to anything in NY. :-)

I used to think that until I ate at Langer's. Now I see why even New Yorkers concede that Langer's is the best in the country.

I did see your review on Langer's after, I will be checking it out now

Ok I mapped it and I think I will be making my trek down there in the upcoming week before my flight to NYC.

All I can say is the Arby's in my neighborhood makes a very good Reuben.

Good to hear. You probably don't live in Alhambra, CA then...

There isn't any pastrami in a Reuben! It's corned beef....

You are correct. With pastrami it's a Rachel, right?

This was 2.5 years ago so I don't remember if it was made with pastrami or if I just screwed up and should have written "corned beef."