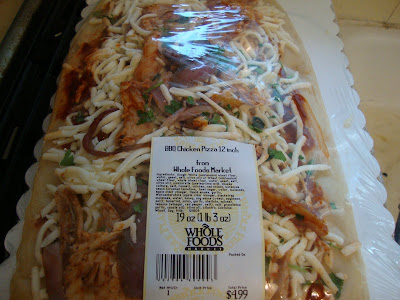 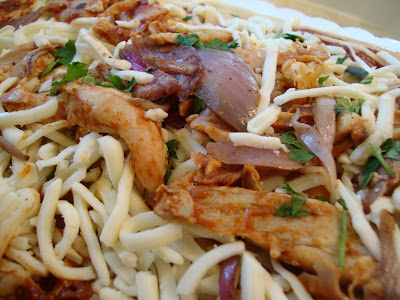 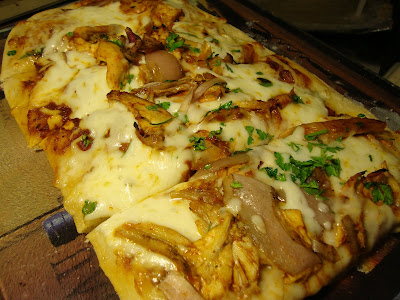 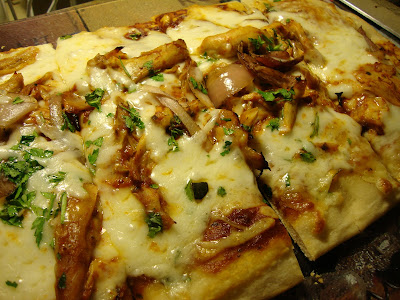 As usual, Friday night was a laid-back night at home. I didn't want to put forth too much effort. Originally we'd thought about getting sushi at Whole Foods, but I saw a pizza on sale - it's normally $4.99, but it was half-price. And it was BBQ chicken, which always catches my eye.
It cooked in the oven in less than ten minutes. It was average at best. I know the old joke about pizza and sex ("Even when it's bad it's still pretty good") but it would be a stretch to call this pizza "pretty good." The cheese was rubbery, the red onions were kind of stale and the chicken was hard.

Now, it's silly to complain about a big pizza that cost two and a half dollars. We ate it and didn't complain (too much). But if I'm ever at Whole Foods again and see this pizza, even at half-price, I will not get it. 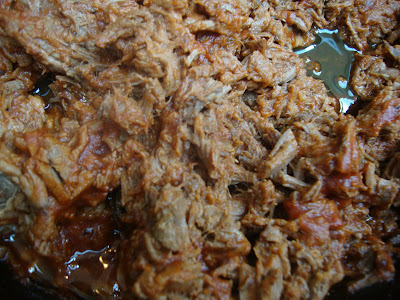 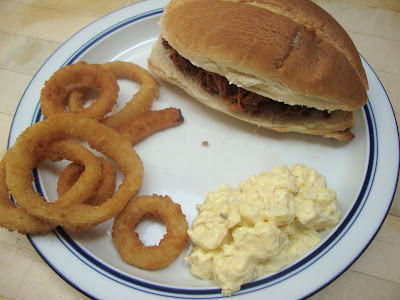 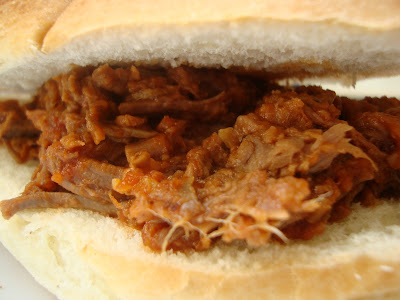 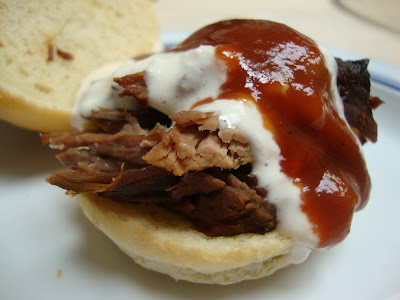 Like the previous weekend, I went over to my parents' house to help move stuff for the painting they are having done. I picked up a couple briskets at the store on Friday and slow-cooked them overnight with sweet onions. I divided them into two pots: one with just the meat and onions and one with some barbecue sauce. I made myself a sandwich with the latter brisket, and had some onion rings and potato salad.

Later on I used some of the plain brisket and made myself a slider, adding horseradish sauce and steak sauce. 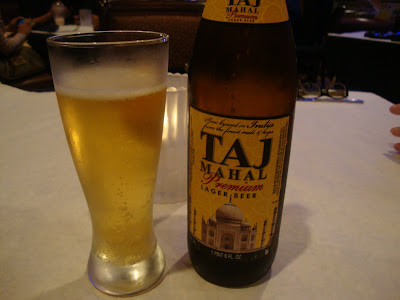 After moving a lot of boxes and other stuff at my parents', I'd worked up quite an appetite by the evening. So Elizabeth and I went to Mezbaan. I drank a cold Taj Mahal and pondered what to order. 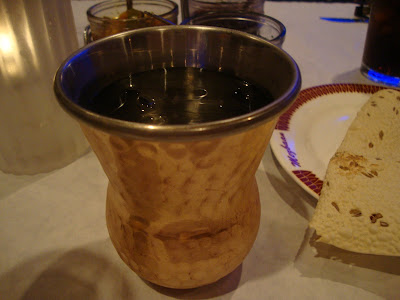 We were served water in fantastic, copper-colored glasses.

"We have to get some of these," Elizabeth said. "We need more glasses you can't break." 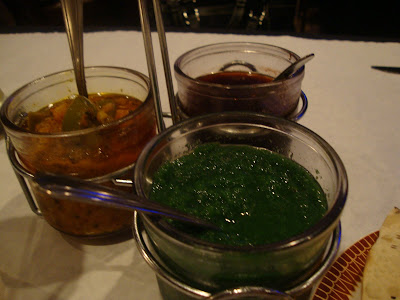 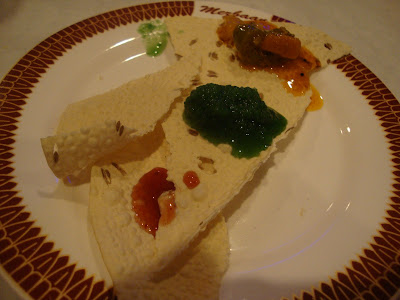 Papadums and chutneys always taste good, but on this night they were even better. I could have eaten fifty of them. 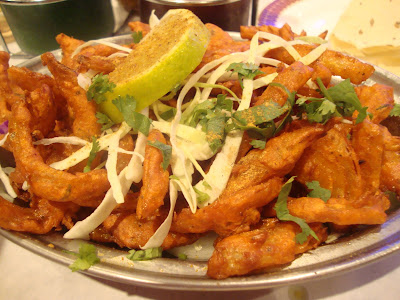 Onions rings are one of the most delicious foods ever: battered, fried - and, if you're lucky, spiced - pieces of onion. Onion bhaji are even better. 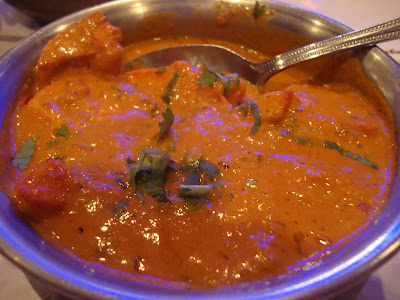 The lighting at Mezbaan always changes, running the spectrum between a half-dozen different colors. On this night, though, the lighting was consistently bright. So I took plenty of pictures, including the one above of the chicken tikka masala. But, right as I stirred the bowl to get a better picture of the delicious chunks of chicken, the lighting changed. I literally needed ten seconds more to capture a better picture. Oh well. 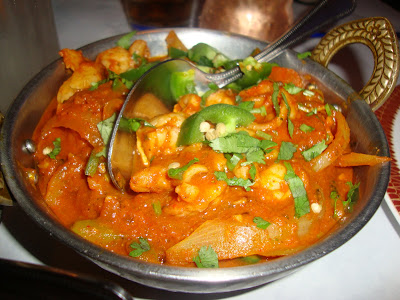 When I ordered the shrimp karahi I was asked how spicy I wanted it. I said "plenty spicy," fully aware that isn't a specific answer. I was warned that it can get pretty hot. I said "That's fine." There were many chopped of pieces of jalapeno in the dish, and maybe I should have asked for it a little less spicy - not that it was bad or I couldn't take the heat, but it distracted from the flavor of the shrimp. It was still great, though. 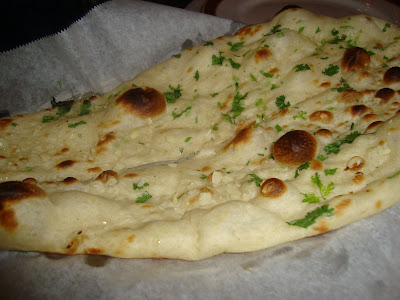 Garlic naan. I don't have much to say about this. It was good. 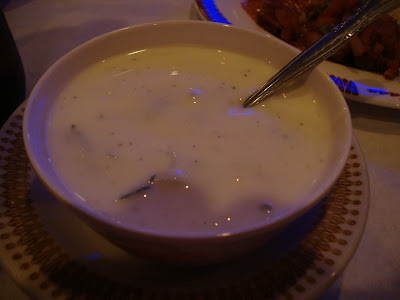 The raita - a cool, yogurt-based sauce that perfectly cools down the spice of any dish. It was a wonderful complement to the shrimp karahi, and I spooned some of it on to the naan and topped it with the shrimp and chicken, a sort of Indian flatbread taco. 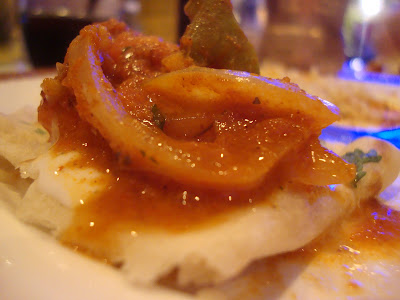 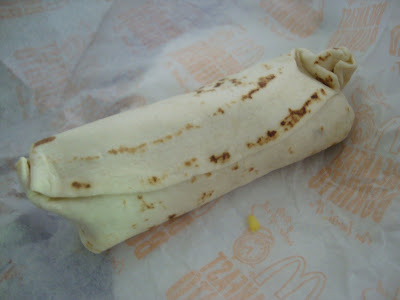 Elizabeth wanted a McDonald's sausage biscuit for breakfast, so I made the Homeric journey to the Golden Arches (okay, it's only five blocks) to pick one up. I wasn't particularly hungry but I saw a "sausage burrito" on the dollar menu so I figured I'd give it a try. 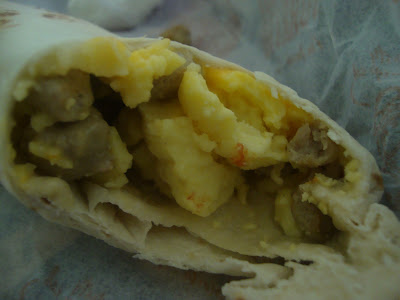 I should have known it would have eggs in it. I like eggs, but I have never liked McDonald's eggs. I cannot quite describe why other than that they just taste dry and cheap. 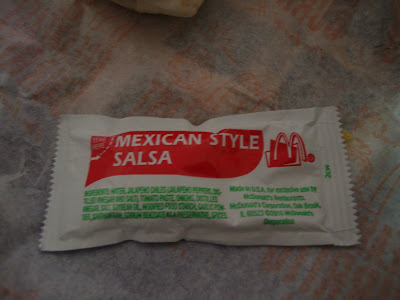 But then I found a packet of "Mexican Style Salsa" hidden underneath the napkins. I hoped this could liven up the burrito. I imagined an abuelita chopping up the peppers for the salsa that morning, adding them to the tomatoes that had been roasting overnight before (somehow) packaging it all up in a little packet. I once had a celebratory dinner at a tiny restaurant in Ensenada (I was on a racing team that day for the Baja 500 and we'd won our class) that lasted hours; their salsa was the spiciest I have ever eaten. That salsa would surely save this burrito. 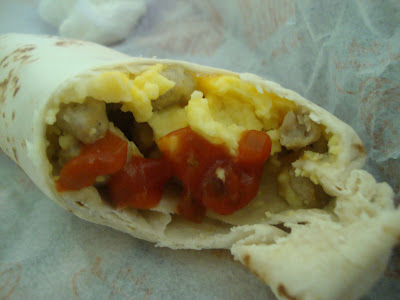 Alas, this "salsa" was a flavorless liquid the consistency of ketchup mixed with water, and about as spicy as that would be. Whatever. I was lying earlier when I said I imagined it would be any different. 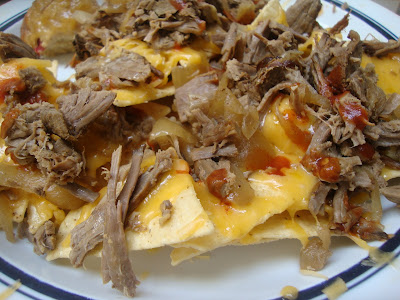 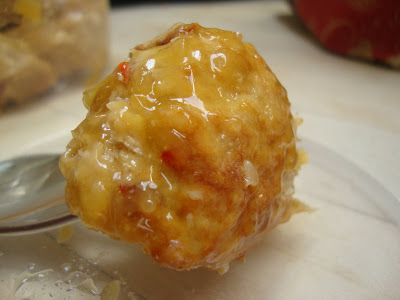 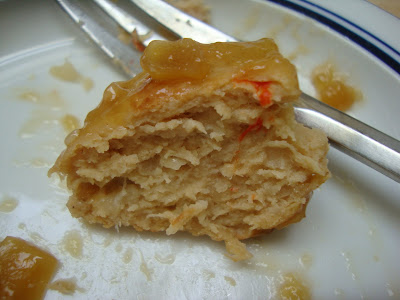 Sunday afternoon I was back at my parents' house to move some more things for them. I made them a plate of nachos with the leftover brisket from the day before. (Actually, I really only made that for my mom; I just made my dad a plate of meat and nothing else, knowing that's what he'd want.)

My brother was over, too. I'd gone by Albertson's to pick up some Aleve and noticed they had some "teriyaki chicken meatballs." I could see those being terrible, but I could also see them being delicious and something my brother would enjoy. And they were certainly inexpensive - I got a container of a dozen meatballs for under three dollars. They actually tasted better than I expected. I had feared the chicken meatballs would be flavorless and all the taste would come from the sweet sauce, but they were actually moist and flavorful. I would eat these again, although I would never go out of my way to get them. 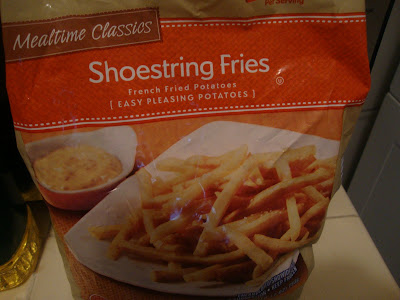 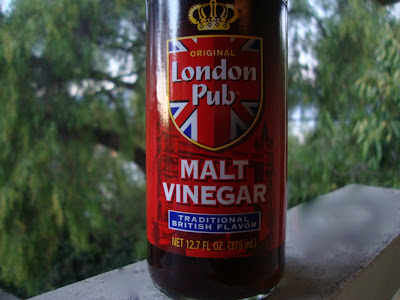 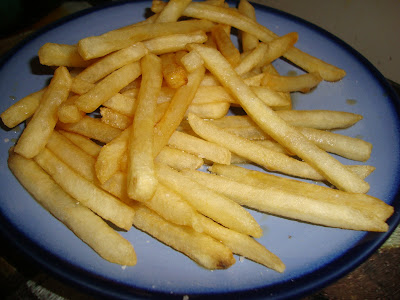 There was Sunday Night Football and a new episode of Huell Howser (although he was in Santa Barbara at an orchid festival; not one of my favorite episodes) so I wanted something very simple for dinner. And neither of us were very hungry, so I just cooked up some fries and doused them with salt and vinegar. A very simple way to end the weekend.
Posted by JustinM at 9:17 AM

I gotta say, it isn't even lunch time yet, but the brisket nachos are looking pretty tasty!